By Centre for Analytics and Behavioural Change• 19 June 2020 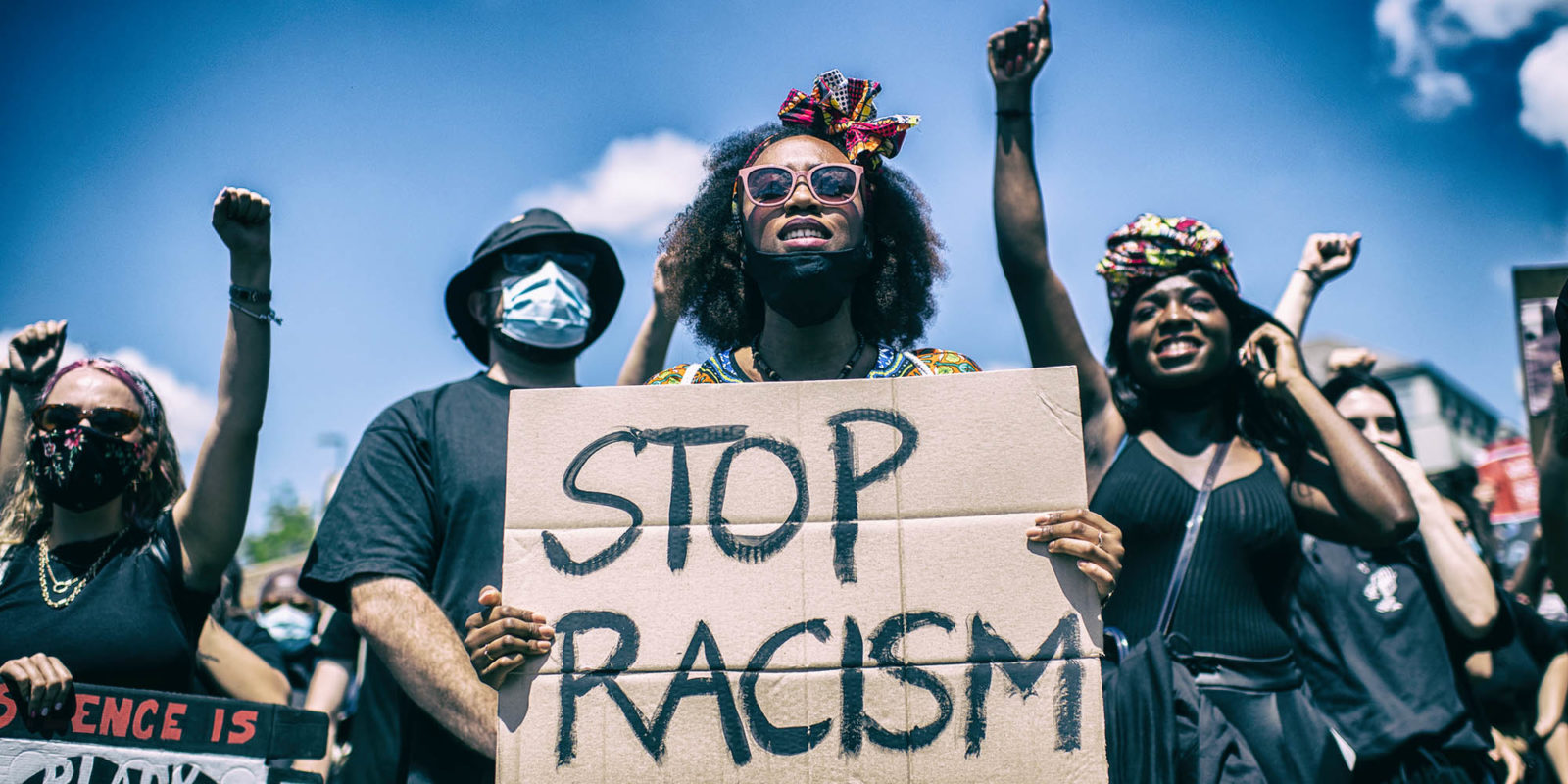 People demonstrate against racism after the worldwide movement of the Black Lives Matter (BLM) protest against the recent death of George Floyd in Zurich, Switzerland, 13 June 2020. (Photo: EPA-EFE/ENNIO LEANZA)

This is a summary of the trending, highest-impact and most-active themes and their narratives related to social cohesion and division in South African public-domain social media conversations on 18 June 2020. Global trends affecting South Africa are also featured.

Tweets about the cultural and social nuances of sexual assault gained attention on social media. The tweets highlighted how sexual harassment is experienced from a young age. 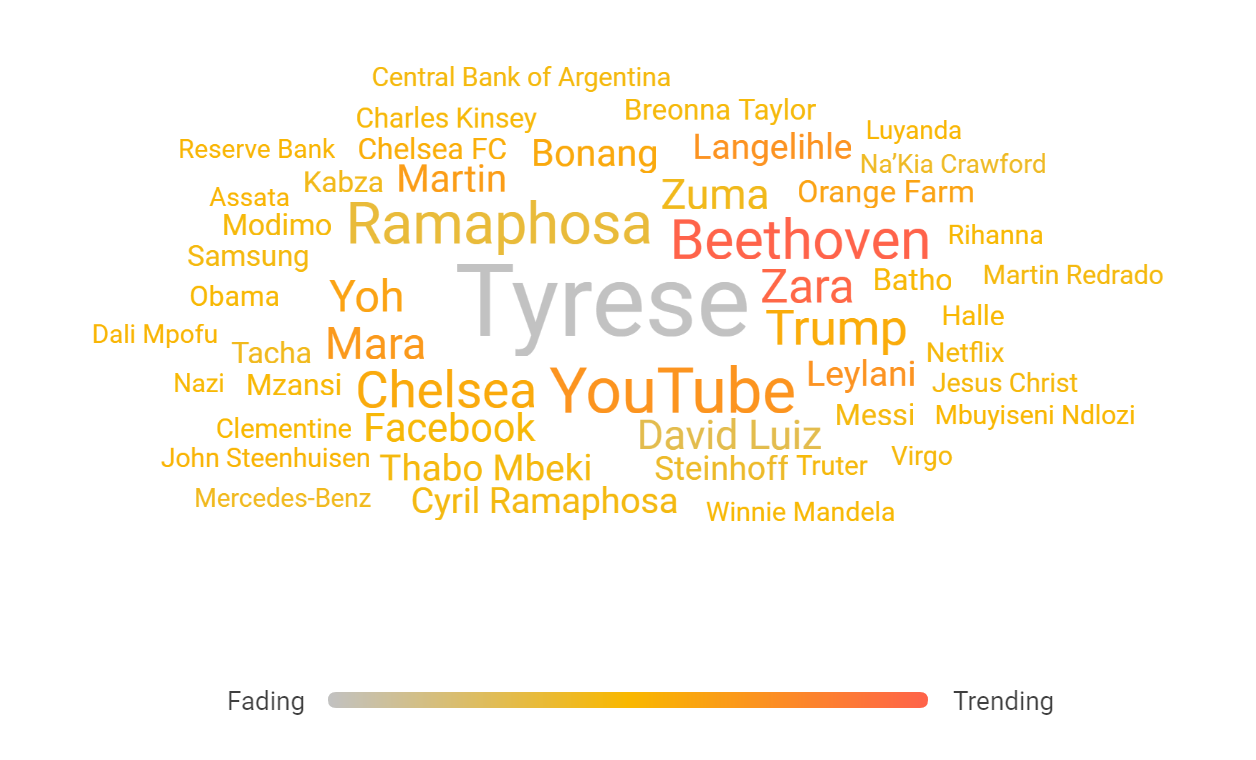 A tweet by @cinnamonro featured on Twitter: “fav this if the first time a man expressed sexual interest in you was under the age of 16. I’m trying to see something”. The tweet received over 816,100 likes, 47,900 retweets and 8,000 comments. Many comments described women’s experiences of receiving sexual interest from men at a young age. @beandaytoe responded to the tweet by sharing her experience of sexual harassment at the age of nine: “I was 9, at the beach (i think I wasn’t even wearing a bra yet) my grandma walked away for ten mins and two boys (around 17 y/o) started saying very sexual stuff abt my body; everytime i think about it i feel fucking sick.” The tweet received 3,200 likes. @ShahdBatal tweeted about how women need to mention “having a man” in order to deflect men’s advances. She tweeted: “it’s always amazed me how ‘i have a boyfriend’ is the strongest card to get guys to stop harassing me bc they’ll respect a man they don’t know before they respect the woman in front of them.” The tweet received over 304,900 likes, 81,700 retweets and 951 comments. Most comments included all the phrases women have used in order to avoid harassment.

Who is at fault?

@AdvoBarryRoux tweeted a picture asking men not to rape, kill, or beat women and requested people to retweet for awareness. The tweet received 7,700 retweets and 5,900 likes.

Institutionalised racism was the top social media conversation, focusing mainly on how racism can be curbed. 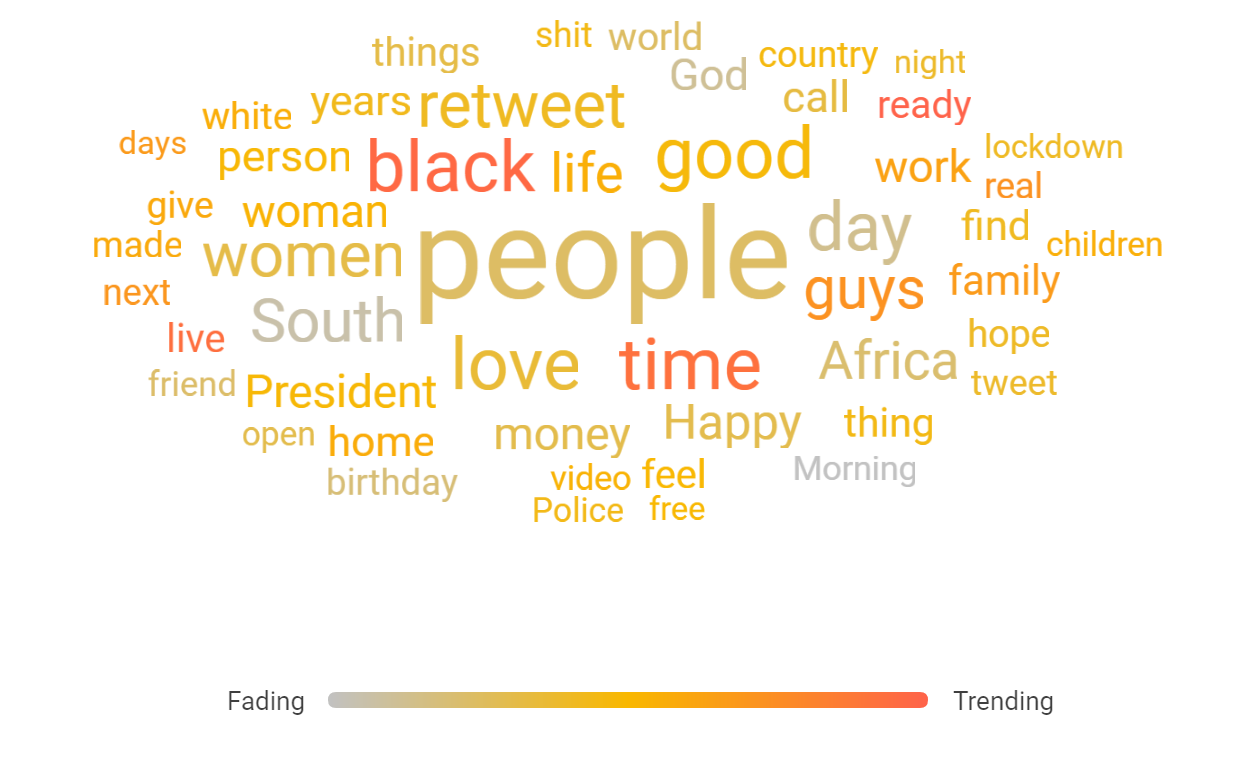 Commenting on Quaker Oats Company’s decision to change their brand name and remove an image from their product called Aunt Jemima, which the company recognises as being based on a racial stereotype, @wkamaubell tweeted: “Just so we’re clear, white people, firing Aunt Jemima & giving us Juneteenth off are not the frontlines of defeating white supremacy & dismantling structural & instutional racism. Better schools, a just criminal justice system, access to healthcare was more what we were thinking.” Tweeted at 9:27, this post was retweeted over 40,000 times and received more than 160,000 likes. Earlier in the day, at 1:34, @Mabitsela_Ali tweeted the snippet of an old movie in which legendary American actor James Earl Jones stars as a reverend who tries to expose black people in his community to the structural oppression that they face. The tweet that accompanied the video read: “Every black person must see this video. When I say everything black person. I mean EVERY BLACK PERSON!!!” The tweet has been viewed more than 10,000 times and retweeted over 850 times.

Pep Guardiola, the Manchester City football manager, has been trending on social media for a race-related comment he made during a recorded interview. A video tweeted by @brfootball at 12:24 was viewed more than 150,000 times. In it, Guardiola says, “We should say white people apologise for the way we treated black people in the last 400 years … I feel ashamed for what we have done to these marvellous black people around the world.” The post received 1,000 retweets and 4,000 likes. Mixed emotions flooded the comments, ranging from “Guardiola is also a racist” to “it’s not all white people pep” and “I’ve never treated black people badly, so nah”.

Meanwhile, in South Africa, citizens have been angered by a post that was allegedly spread by American singer and actor Tyrese Gibson. At 8:38, @AdvoBarryRoux tweeted a screenshot of what appears to be the Instagram post made by Tyrese. The post includes an image of white people in shackles and a white wet nurse to a black child. The caption reads, “The flip………Get to YouTube this is what’s going on in South Africa……………” Man’s Not Barry Roux’s tweeted: “Tyrese deleted this post on Instagram where he is lying about South Africa. #Tyrese”. His post received 280 retweets and 899 likes.

Other South Africans, like @naledimashishi, also spoke out, tweeting: “Tyrese is arguing with South Africans who live in South Africa that his post isn’t inaccurate because he once visited this country and visited Winnie Mandela. Please make it make sense.” This post has received 222 retweets and 489 likes. 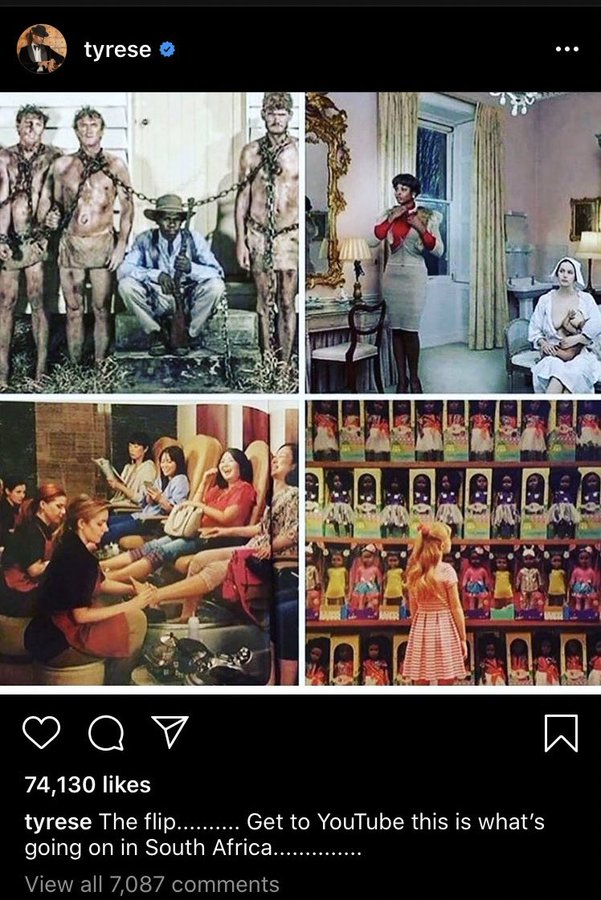 A video tweeted by eNCA shows pupils from Pretoria High School for Girls conducting a peaceful protest on the school premises against alleged racism at the school. A learner is heard saying: “They did what they did to us in 2016, they threatened us once again.” The video had close to 60,000 views, over 1,000 retweets and almost 2,000 likes. Twitter account holder @pmxlxisane shared the video at 14:20 and tweeted, “It’s really upsetting me that this girl’s entire high school experience has been about fighting. When does she get to just be a young woman enjoying her life?”

Reports of violence against women and children continue to dominate social media conversations in South Africa. On Thursday @eNCA shared an article on Twitter titled: “Toddler stabbed to death in Orange Farm”. The tweet read, “The body of a three-year-old girl has been discovered in Orange Farm. Police say a waste collector found the child in a dustbin.” The tweet received 94 retweets and 80 likes.

On the same day, @Abramjee tweeted a video showing women wailing over the spot where the toddler had been discovered. The tweet read: “The body of a three-year-old girl has been found in Orange Farm. @DereleenJames”. The tweet generated 1,800 retweets and 1,400 likes.

Twitter users reflected on past cases of GBV in South Africa. Twitter user @JayFromVenda retweeted an original post from a day prior by @lulu_luwela which read: “A girl went to pick up a package at a post office and was raped and murdered. I will never get over this.” The tweet received 768 retweets and 784 likes. The retweet by @JayFromVenda read: “Not on her way to the post office by some dangerous thugs along the way, but by the post office clerk. A seemingly normal man living a normal life, on a random day at his workplace decided to rape and murder her. That is how bad Gender Based Violence is in South Africa.” This generated 680 retweets and 614 likes.

Later in the day, Twitter user @Prof_Erence shared a tweet in memory of late South African actor Mandla Hlatshwayo. Accompanied by a photograph of Hlatshwayo, the tweet read, “Mandla Hlatshwayo was shot dead when they tried to help save a woman who was being robbed. Died trying to save a sister. We will not forget what you did my brother. Rest easy #GBVmustfall. We will fight GVB in honor of your memory. We will not sleep until women feel safe again.” The tweet gained traction with over 2,700 retweets and 10,400 likes. DM