By Centre for Analytics and Behavioural Change• 18 June 2020 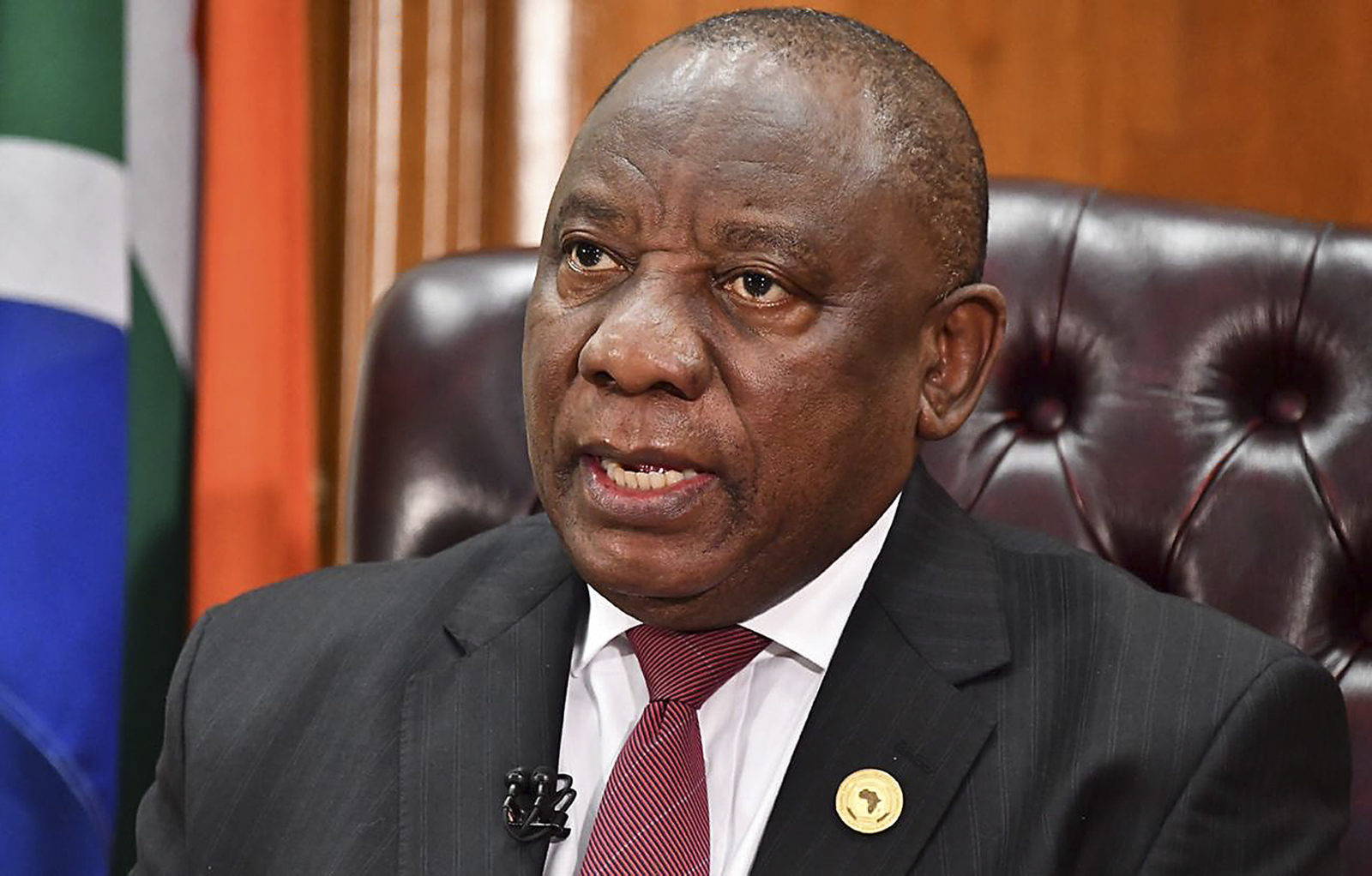 This is a summary of the trending, highest-impact, and most active themes and their narratives related to social cohesion and division in South African public-domain social media conversations on 17 June 2020. Global trends affecting South Africa are also featured.

The top topic of the day on social media was “President Cyril Ramaphosa”. His evening address to the nation covered the two pandemics raging through South Africa: the economic and social impact of Covid-19 and rampant violence against women and children.

The easing of lockdown regulations, announced to address economic hardship, did not go far enough for some. While many social media activists welcomed the President’s stance against gender-based violence, some called for stronger action, not strong words.

@News24 tweeted at 20:22: “President Cyril Ramaphosa announces that restaurants, hair salons, conferences, casinos and cinemas will reopen.” The post was retweeted 773 times and received over 2,200 likes. Within the first 200 comments, people were asking “What about gyms?” and demanding “I want my fkn cigarettes back”. 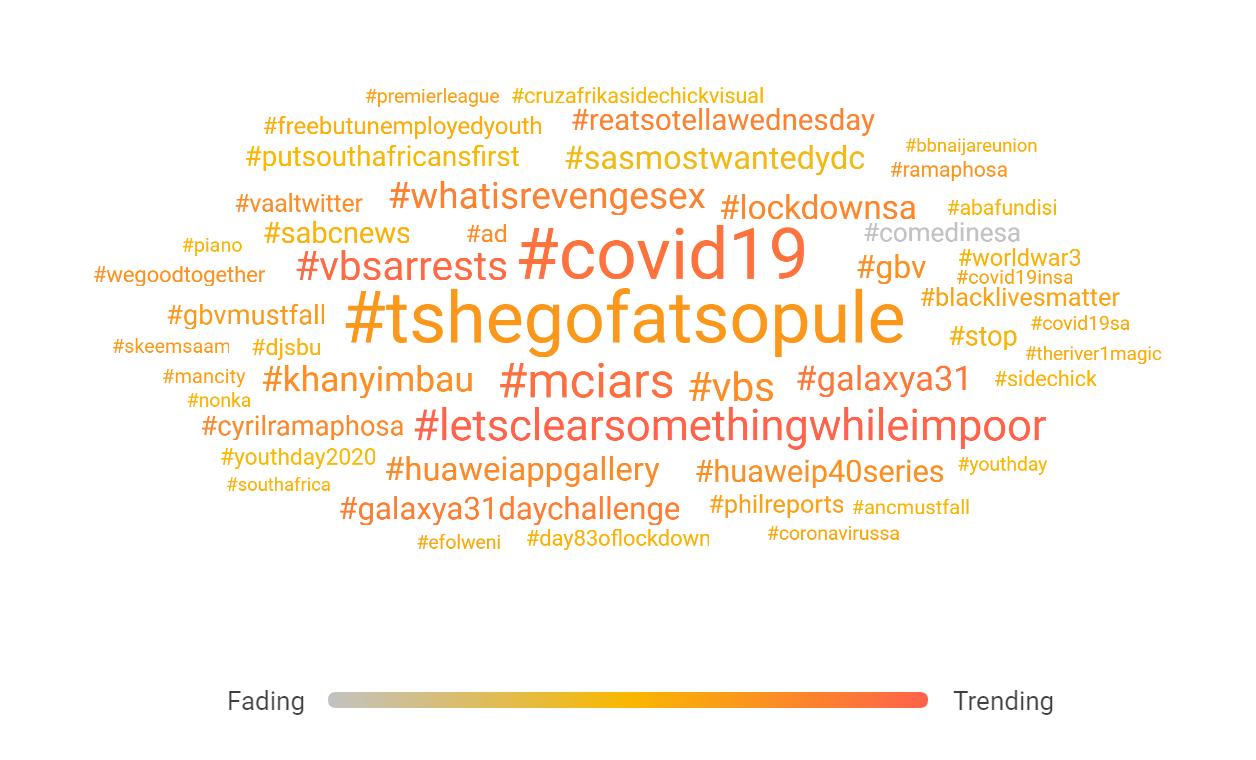 At 21:50 @Our_DA tweeted: “President Ramaphosa’s announcement tonight of a further lifting of lockdown restrictions is an admission that the lockdown serves no purpose and has failed – @jsteenhuisen  #LockdownSA”. This post was retweeted 54 times and received 138 likes. The tweet included a link to an article by the DA’s John Steenhuisen: “The world’s longest hard lockdown, and not Covid19, killed our economy.”

@MapsMaponyane expressed joy that the barber was going to be open again. His tweet included an Usher music video and was retweeted 122 times and liked over 1,000 times by early Thursday morning.

The President was appalled by violence perpetrated against women and children and spoke out strongly against violent, abusive men.

At 20:28, @mbali_ndlela tweeted a quote from the President’s speech: “These women are not just statistics. They have names. They have families and friends.” The post received over 200 retweets and 993 likes.

@Arweqane added: “He did well by taking the time to reflect and name them. I commend that!!” @UlrichJvV also took to Twitter during the address: “About time President Ramaphosa addressed GBV!! Thank you.” This post was retweeted more than 240 times and received over 1,400 likes. Some responders to Ulrich’s tweet demanded more than lip service: “We need action!” 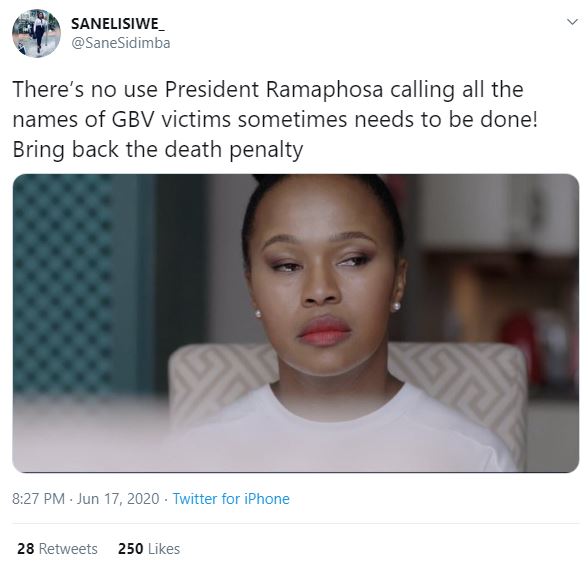 Actress @Ramichuene discussed the President’s views about the influence of alcohol on gender-based violence: “We can’t hide men’s behaviour behind alcohol abuse. Men kill in season and out of season, they kill day and night, they kill when drunk and when sober, they kill pushed and totally unprovoked. Men kill, period my President @CyrilRamaphosa #LockdownSA.” The tweet had received 1,200 retweets, 4,900 likes and 110 comments by Thursday morning.

Many South Africans called for harsher punishment for acts of gender-based violence. @RamiChuene tweeted: “Swift arrests, no bail, harsher punishment please my President @CyrilRamaphosa #GBV is rife. Please ask Bheki Cele to focus on this as a matter of urgency. Basadi ba fela being killed by drunk and VERY SOBER men! #LockdownSA.” The tweet received 234 retweets and 1,100 likes. @SaneSidimba asked for the death penalty to be reinstated: “There’s no use in President Ramaphosa calling all the names of GBV victims, something needs to be done! Bring back the death penalty.” The tweet received 28 retweets and 250 likes.

Artist @Boity supported the President’s comments on gender-based violence: “Yes. GBV is a pandemic in South Africa! A WAR against women and children.” The tweet received over 4,000 likes, 987 retweets and 50 comments. One of her Twitter followers, @AviweTshangana, commented: “It’s not even a war because one party is not fighting back. It’s a genocide. SA men want us dead.”

Meanwhile, black women in the US have called out J Cole for his insensitive lyrics asking women to be more patient with men, shortly after news of the murder of two black women went viral. @ashleighdjay said men were not being proactive and educating themselves on women’s issues: “Baby, we’re at war. I don’t have time to sweet talk you through the revolution.” The tweet received over 14,800 retweets and 47,900 likes.

Race was the other trending topic by volume on Wednesday.

A tweet about how current conversations on race infer a deeper power imbalance received much attention. @BerniceKing tweeted: “Even the statement ‘Let’s invite more Black people to the table’ implies ownership of the table and control of who is invited. Racism is about power.” The tweet got 32,000 retweets and 123,300 likes. 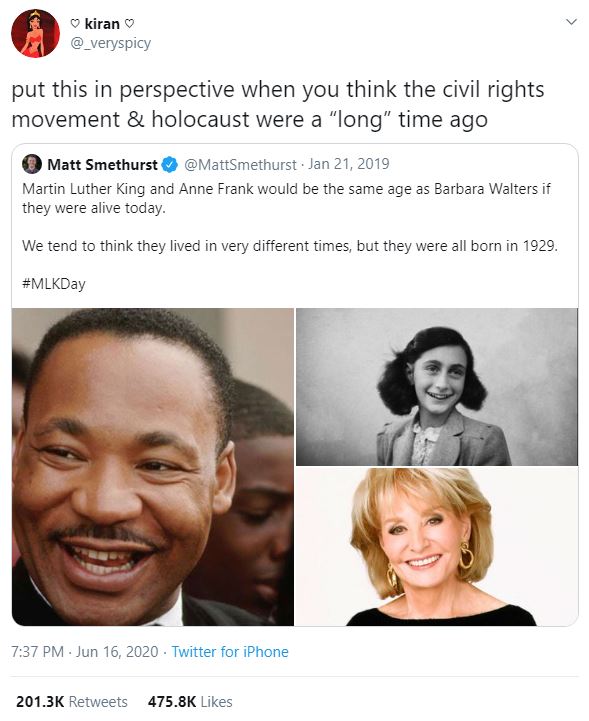 Earlier in the week, @_veryspicy retweeted a post by @MattSmethurst: “Martin Luther King and Anne Frank would be the same age as Barbara Walters if they were alive today. We tend to think they lived in a very different time, but they were all born in 1929.” The tweet, accompanied by images of Martin Luther King, Anne Frank and Barbara Walters, generated 24,100 retweets and 52,100 likes. The retweet by @_veryspicy read: “Put this in perspective when you think the civil rights movement and holocaust were a ‘long time ago’.” This tweet gained huge traction, with 201,100 retweets and 475,200 likes.

Developments in the VBS scandal received much attention on social media after @SABCNews tweeted: “BREAKING NEWS | Several top VBS insiders, including board members and the chief KPMG auditor for the bank, have been arrested. The arrests come nearly two years after a R2-billion theft of #VBS Mutual Bank Funds. #sabcnews”. The tweet received 508 retweets and 821 likes. 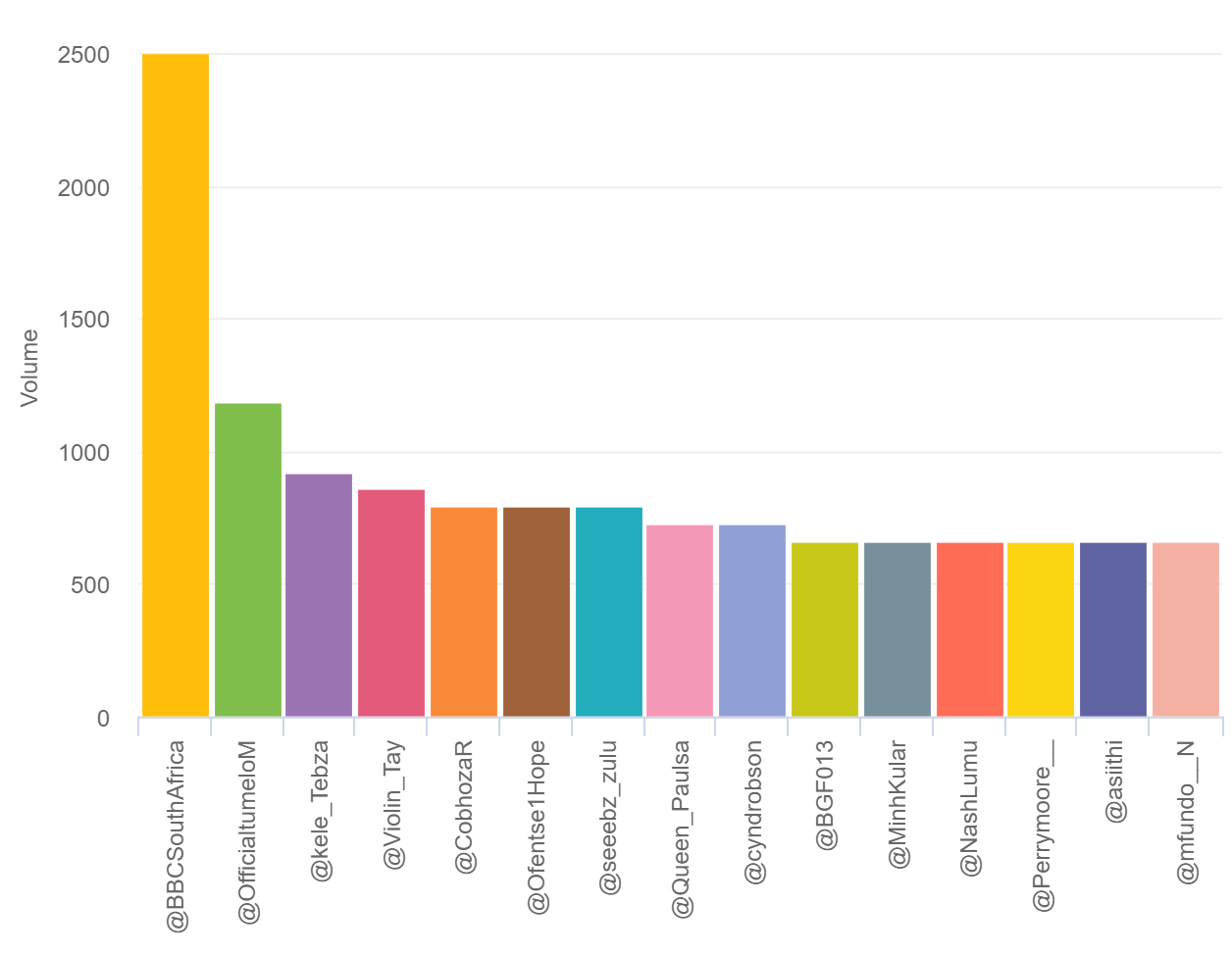 Daily Maverick journalist @PaulivW shared a nine-part Twitter thread detailing background to this issue, saying: “#VBS robbery: First arrests 8 men have been arrested early on Wednesday morning in connection with the theft of R2.7-billion at VBS Mutual Bank in around 2015 to 2018.” The tweet had generated 2,100 retweets and 4,100 likes by early Thursday morning. DM