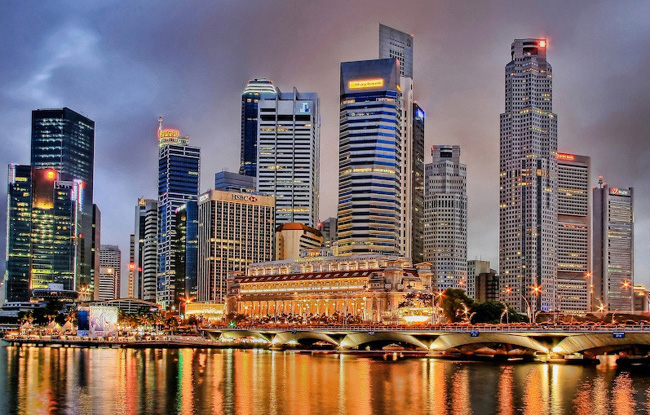 Singapore shows that having the right policies matters, no matter the inheritance, say the writers.

The difference between Singapore and South Africa, like much of the rest of the African continent, is in the nature of the policies pursued and the fact that sometimes unpopular policy decisions were made.

Thirty years on from its independence out of the collapse of the Malay Federation, by 1995 Singapore had transformed its economy, growing the average annual income of its citizens from $4,100 per capita to $29,500, nearly the same level as its former colonial master, Britain, which it was to overtake within a decade.

Whereas the share of the average South African of global per capita income amounted to 82% in 1990, this had fallen to under 70% by 2019. The share of Singaporeans more than quadrupled from 1965 to 400% three decades later.

There are of course differences between the two national circumstances.

It is, by definition, easier to extend governance over a small territory like Singapore’s. Likewise, there are regional effects and defects. Singapore’s region is upwardly mobile in development terms, whereas South Africa’s is generally flatlining and in some cases (like Zimbabwe) going down the poverty plughole. Let’s not forget, however, in 1965 the Asia region was hardly the growth and development success it is today. Then, the average income across East Asia was under $1,700 (it is now nearly $10,300); and sub-Saharan Africa’s was $1,250 (now $1,660).

Basically, South Africans — like their fellow Africans — have become relatively poorer while Southeast Asians are much, much wealthier.

What explains the difference?

This is not down to a legacy of legislated racial discrimination. Singapore had that, just like SA. In fact, much of Southeast Asia endured a similar history of racial exploitation and, in extreme circumstances, such as Vietnam, continuous violent subjugation.

Or diversity. Singapore has had to manage continuous racial tensions between Chinese, Indian and Malay communities. There was also extreme income inequality at independence across both regions.

And it’s not the traditional excuse that Singapore “enjoyed” a benevolent dictatorship, and South Africa is a democracy, which makes policy formation and implementation a more contested and challenging process. The ANC has enjoyed total electoral dominance since 1994 and, even in the interregnum between 1990 and 1994, essentially enjoyed a veto on any major economic decisions.

If anything, African states were, at independence, seen to have many advantages over their newly liberated Asian counterparts, not least their natural resource endowment, which SA enjoys probably primus inter pares globally.

The difference between Singapore and South Africa, like much of the rest of the African continent, is in the nature of the policies pursued and the fact that sometimes unpopular policy decisions were made. Singapore under Lee Kuan Yew relentlessly and ruthlessly followed a strategy which sought to make Singapore a home for multinational corporations which would bring with them skills, technology, capital and markets. From just a handful of multinational firms in the mid-1960s, today Singapore is home to 7,000.

The reason for this variance is simple. Singapore has become a low-tax environment with superb skills and connectivity, creating a network of more than 80 double-tax arrangements and employing smart immigration policies. It has in the process become a gateway for investors in the Asean region, in which its businesses have staked more than $500-billion. SA’s foreign investment stock in Africa is less than $20-billion.

Dollops of pragmatism were applied in Singapore, driven by leadership’s attention to detail and ownership of the problems.

The difference is also in governance. Singapore ranks at number two in the World Bank’s Doing Business indicators, assessing factors from the ease of starting a company to the best labour force and intellectual property rights protection. South Africa ranks 84th of 190 countries.

And in corruption. Singapore ranks fourth out of 180 countries on Transparency International’s listing, South Africa is 70th.

Education, housing and savings were similarly tackled with a revolutionary fervour in Singapore which ranked as the top country in the global Trends in Maths and Sciences Scores. By comparison, in 47% of SA high schools, not a single child could reach the intermediate international benchmark in mathematics. Post-apartheid education has been a chronic and notable failure across virtually every benchmark, in spite of government efforts to talk up and, sometimes, jack up the marks.

And this (lack of) excellence bleeds into other areas of capacity.

Whereas one deliberately sought to create a meritocratic state, the other has reinforced political reliability over technical capability

“Our system,” said Singaporean prime minister (and Lee’s son), Lee Hsien Loong, in 2005, “shielded civil servants from political interference, [giving them] the space to work out rational, effective solutions for our problems [so they can] practise public administration in almost laboratory conditions.”

Dollops of pragmatism were applied in Singapore, driven by leadership’s attention to detail and ownership of the problems.

The difference with South Africa is stark. Instead of far-reaching, fundamental reforms, being better than Jacob Zuma and his calculating ineptitude has become the benchmark on which this government is judging itself. Being better than Dudu Myeni and not as competent as Lee Kuan Yew’s band of technocrats is a low bar, and one not high enough to compete successfully globally.

While SA possesses the social, political and economic capital to make bold changes, it has continuously reinforced mediocrity, excused by the past of which it remains firmly a prisoner. Rather than using crises to double down on reforms, it has used such moments to reinforce rhetoric and failed to confront the harsh reality of institutionalised underperformance. It has found it impossible to escape the clawing void.

Under Zuma the ANC became a giant patronage machine, efficiently redirecting state resources towards a small elite that benefited from jobs and contracts. While the rhetoric about cleaning up the state has been loud, the reality is that the patronage machine grinds on with trade unions, local leaders and party grandees unwilling to unplug themselves from the easy money.

The first is to try to work with the ANC to change its policy direction, towards embracing the market rather than building the reach of a second-rate state. The alternative is to attempt to build a competent, viable opposition capable of taking the difficult decisions that would shift the country to the Singapore path.

Both are very difficult tasks. The incentive structure in the ANC is skewed towards the retention of power through a combination of radical and sometimes racial rhetoric (from alignment with Cuba and Venezuela to raucous lip service to any anti-Western cause) coupled with redistribution through social welfare grants and a burgeoning civil service.

Under Zuma the ANC became a giant patronage machine, efficiently redirecting state resources towards a small elite that benefited from jobs and contracts. While the rhetoric about cleaning up the state has been loud, the reality is that the patronage machine grinds on with trade unions, local leaders and party grandees unwilling to unplug themselves from the easy money.

To justify the continuation down the statist path in the face of a mountain of evidence that it is impoverishing the country, leaders harken back to the past and dust off policies the world outgrew decades ago. At times it seems like many in the ANC’s Cabinet, and its top six, lament the passing of the Cold War and the ideological chimera of socialist utopia. They forget that such statism failed dismally not because the state was inefficient (the DDR was run by Germans, after all), but because the system itself was fatally flawed.

Singapore shows that having the right policies matters, no matter the inheritance. This and the rigour of implementation reflects a decisive leadership interested in popular welfare and concerned with attention to detail. This requires, too, having the right people. A meritocracy demands an education system which is reliant on excellence, not excuses.

On the other side of the political equation, building a viable opposition out of the ideological haberdashery that is the pro-market Democratic Alliance, radical populist EFF, ethno-nationalistic IFP and FF, and various other ego-empires, is like trying to make a clean sheet from a patchwork quilt.

But to remain stuck where we are is a sure bet on continuing to fall farther and farther behind the rest of the world, with an inevitable drift into populist politics to make amends.

Singapore shows that having the right policies matters, no matter the inheritance. This and the rigour of implementation reflects a decisive leadership interested in popular welfare and concerned with attention to detail. This requires, too, having the right people. A meritocracy demands an education system which is reliant on excellence, not excuses.

And it also illustrates how the need for continuous improvement and adaptation never stops. Singapore has continuously reinvented itself, from a hub for light manufacturing to a services-focused economy to a green island. Development is a process without a finishing line.

Today the average income of Singaporeans is more than $58,000. Learn its lessons or continue to fall behind. DM

Ray Hartley and Greg Mills are at the Brenthurst Foundation, which recently produced ‘The Asian Aspiration: Why and How Africa Should Emulate Asia’. Go to www.thebrenthurstfoundation.org