Dramatic plunges in the the RMB/BER Business Confidence Index (BCI) and the BankservAfrica Economic Transaction Index (BETI) underscore the scale of the economic havoc wrought by the Covid-19 pandemic and South Africa’s lockdown measures to contain it.

The BCI fell to five points from 18, its lowest level since the business confidence survey began in 1975. So even during the political violence and drama of the late 1970s and 1980s, the uncertainty and bloody civil conflict of the early 1990s, various emerging market ructions and the global financial crisis over a decade ago, not to mention the shenanigans and looting of the Zuma era, business confidence in South Africa was higher than it is now.

This, folks, is the economic abyss.

“Strikingly, a reading of five indicates that just about every respondent in the second quarter was unsatisfied with prevailing business conditions,” Rand Merchant Bank said in a statement on Wednesday 10 June.

“Until now, the lowest BCI on record was the 12 index points registered during the third quarter of 1985 and the fourth quarter of 1977. In both cases, confidence falling this low was the result of uniquely adverse political developments in South Africa.

By contrast, confidence in the second quarter of 2020 collapsed primarily due to the unexpected emergence and spread of COVID-19 and the five-week shutdown of almost all non-essential economic activity as a first step to deal with the public health emergency.

Almost overnight a significant portion of businesses had no income but continued to be liable for expenses (such as rent, wages, interest on loans and unpaid earlier supplier deliveries). Those that could operate, faced supply chain disruptions and added costs to keep staff and clients safe,” it said.

The second-quarter survey, conducted online between 13 May and 1 June – as parts of the economy were reopening – covered about 1,800 executives in the building, manufacturing and domestic trade sectors which include retail. 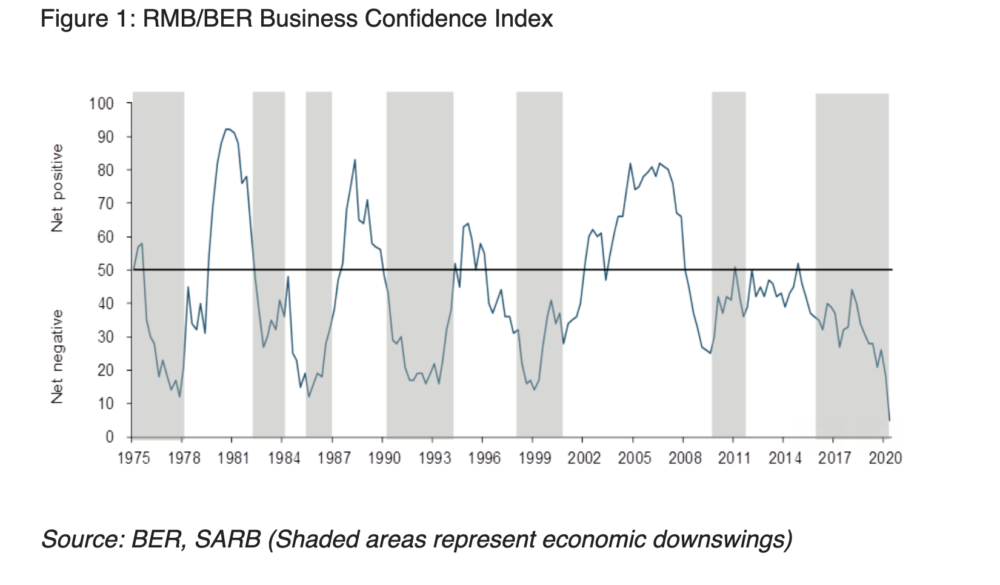 “Over time, business confidence in these sectors has proved to be a reliable, early indicator of GDP growth and private fixed investment,” RMB said. Except it is not an indicator of growth in this case, but of a staggering economic contraction.

“The BETI for the three months ending May 2020 reflected the sharpest decline in its history. The economy recorded 20% less in transaction value than a year ago. While the monthly BETI decline of -4.3% was not as substantial as April’s -14.2%, the March to May period represented the biggest drop on record with the actual total value of transactions lower than any period since April 2005 in real terms.

The size of the collapse in economic transactions that underlie economic activity is perhaps best reflected in the quarter-on-quarter comparison which crashed by 20.4%. The speed of the collapse of over 20% in just three months has been devastating,” Economists.co.za said in a statement.

“If 20% of your transactions disappear, it is indicative of an economic collapse. This is the broadest indicator you will get of what is going in at the coal face. It’s a nightmare. This pandemic and lockdowns might set us back a decade,” Economists.co.za’s Mike Schussler told Business Maverick. Included in the measure are EFTs, which Schussler said were “the lifeblood of the economy.”

And South Africa, which has a low savings rate – a key reason why foreign investment is crucial – is starting to save, but it’s not a favourable indicator in these circumstances.

“South African Reserve Bank data showed a 10.4% increase in deposits of South African residents in April over the last year. This is the highest increase since the Great Recession of 2008/9 and ties with the collapse of economic activity. With a great deal of uncertainty, people and businesses have reduced their spending considerably with more opting to invest in their savings,” Economists.co.za noted.

It remains to be seen when things begin to rebound. Lockdown level three kicked in at the start of June, so hopefully, these measures will at least reverse course this month. But the base is now very low. South Africa’s economy is in the gutter. BM/DM