epa08444980 A discarded latex glove lies on a sidewalk in Rome, Italy, 26 May 2020, during phase two of the country's emergency due to the coronavirus disease (COVID-19) pandemic. According to media reports, environmentalists warn that disposable face masks and gloves used to prevent the spread of the coronavirus disease are additional pollutants threatening the environment. EPA-EFE/GIUSEPPE LAMI

epa08444980 A discarded latex glove lies on a sidewalk in Rome, Italy, 26 May 2020, during phase two of the country's emergency due to the coronavirus disease (COVID-19) pandemic. According to media reports, environmentalists warn that disposable face masks and gloves used to prevent the spread of the coronavirus disease are additional pollutants threatening the environment. EPA-EFE/GIUSEPPE LAMI

On Wednesday, Deputy Chief Justice Raymond Zondo said he is confident the Zondo Commission will finish its report by the March 2021 deadline. The Eastern Cape’s largest emergency unit has been shut down because of shortages of staff, sterile gloves, and uncleaned wards. In addition, the state ambulance service has stopped for the time being. The government’s chief water adviser is on indefinite study leave, after being caught on tape devising ways to get a share of water tanker contracts.

Swipe through the gallery below to view the latest Covid-19 numbers available on 3 June at the district level. All maps are sourced from provincial health departments; however, KwaZulu-Natal did not provide an update by the time of publishing: 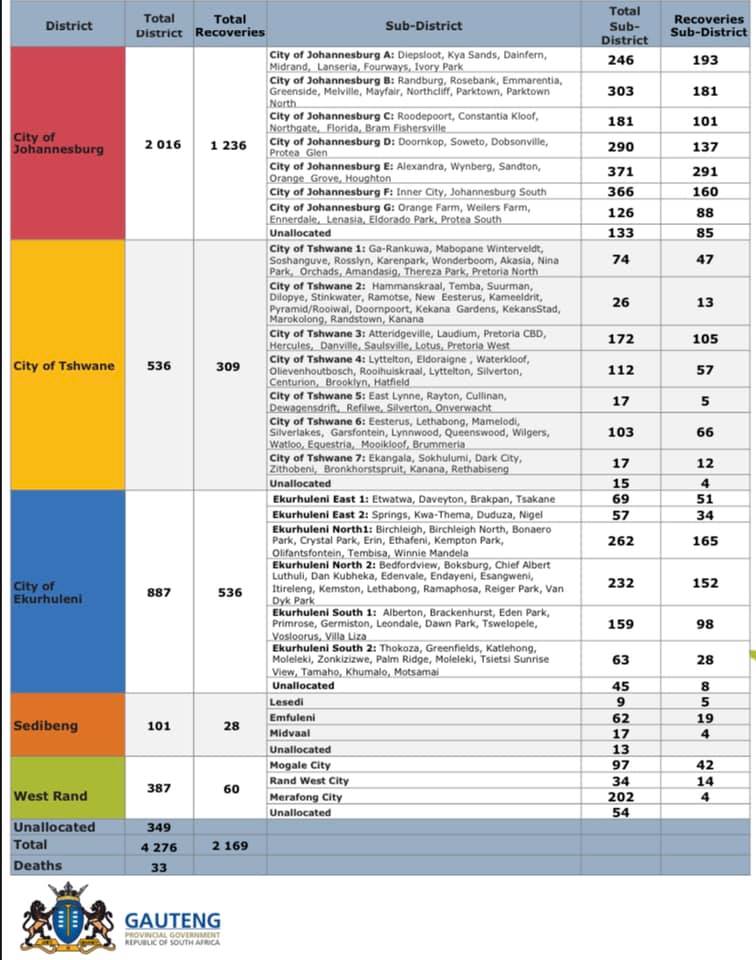 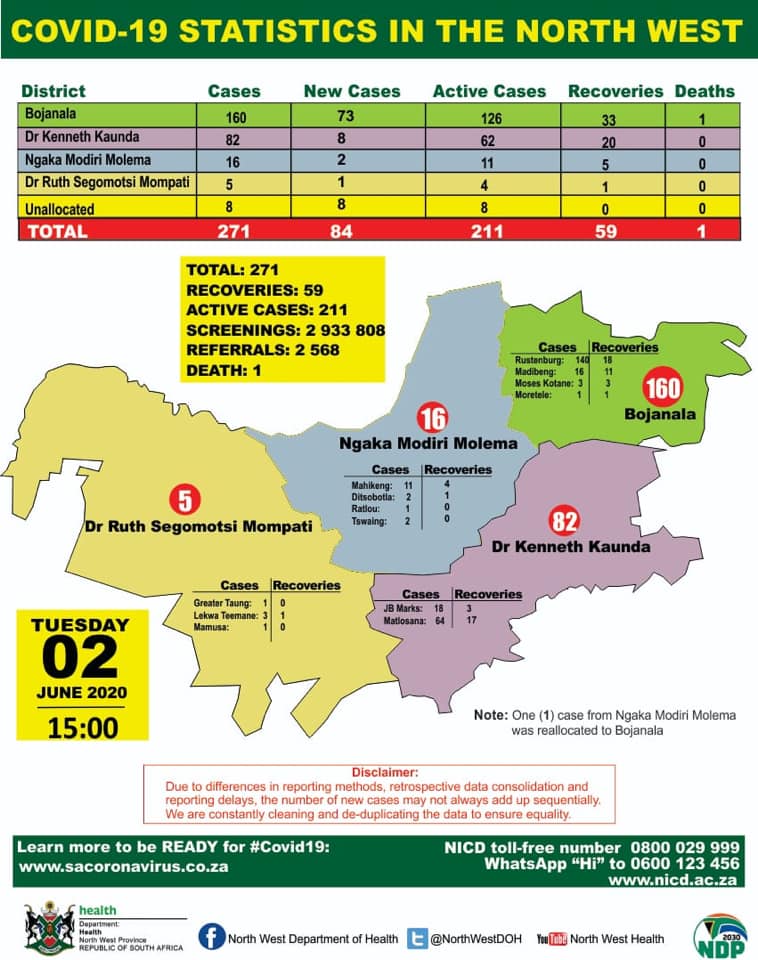 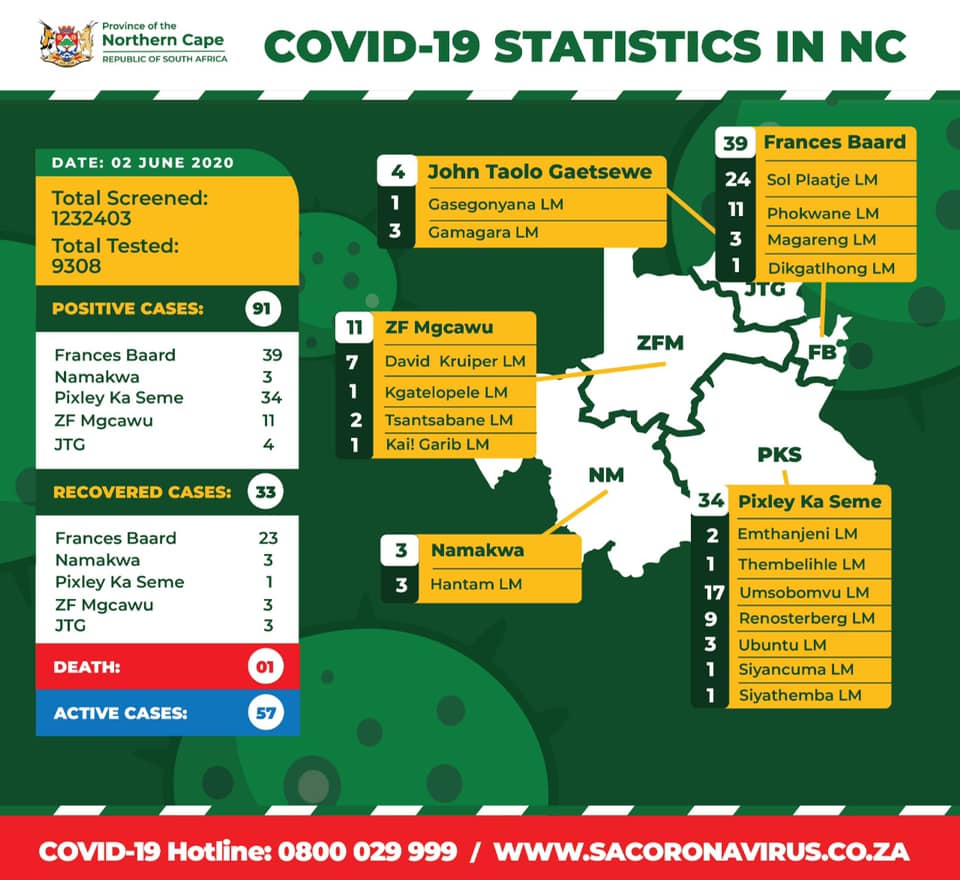 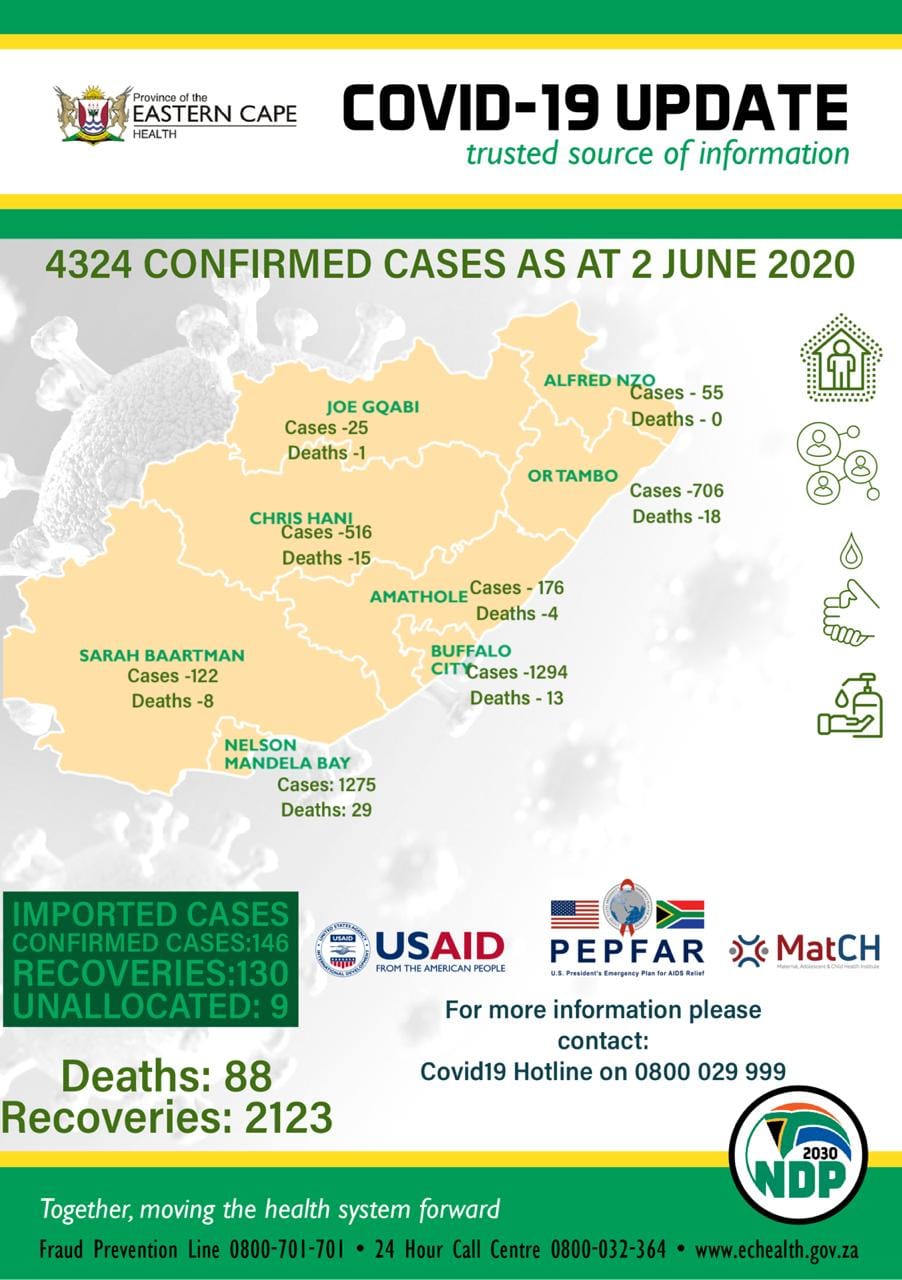 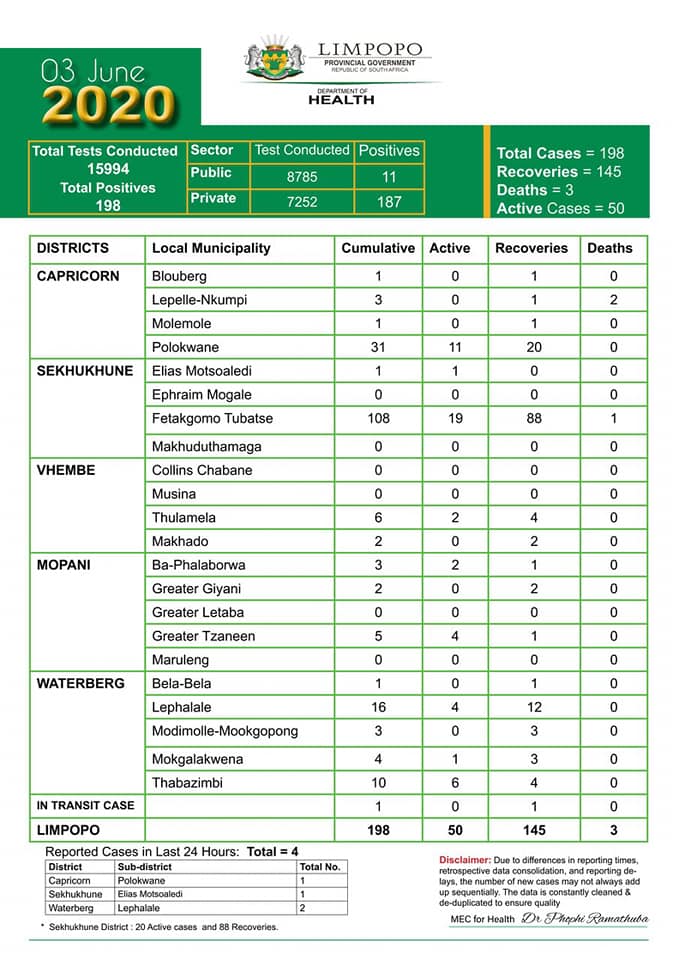 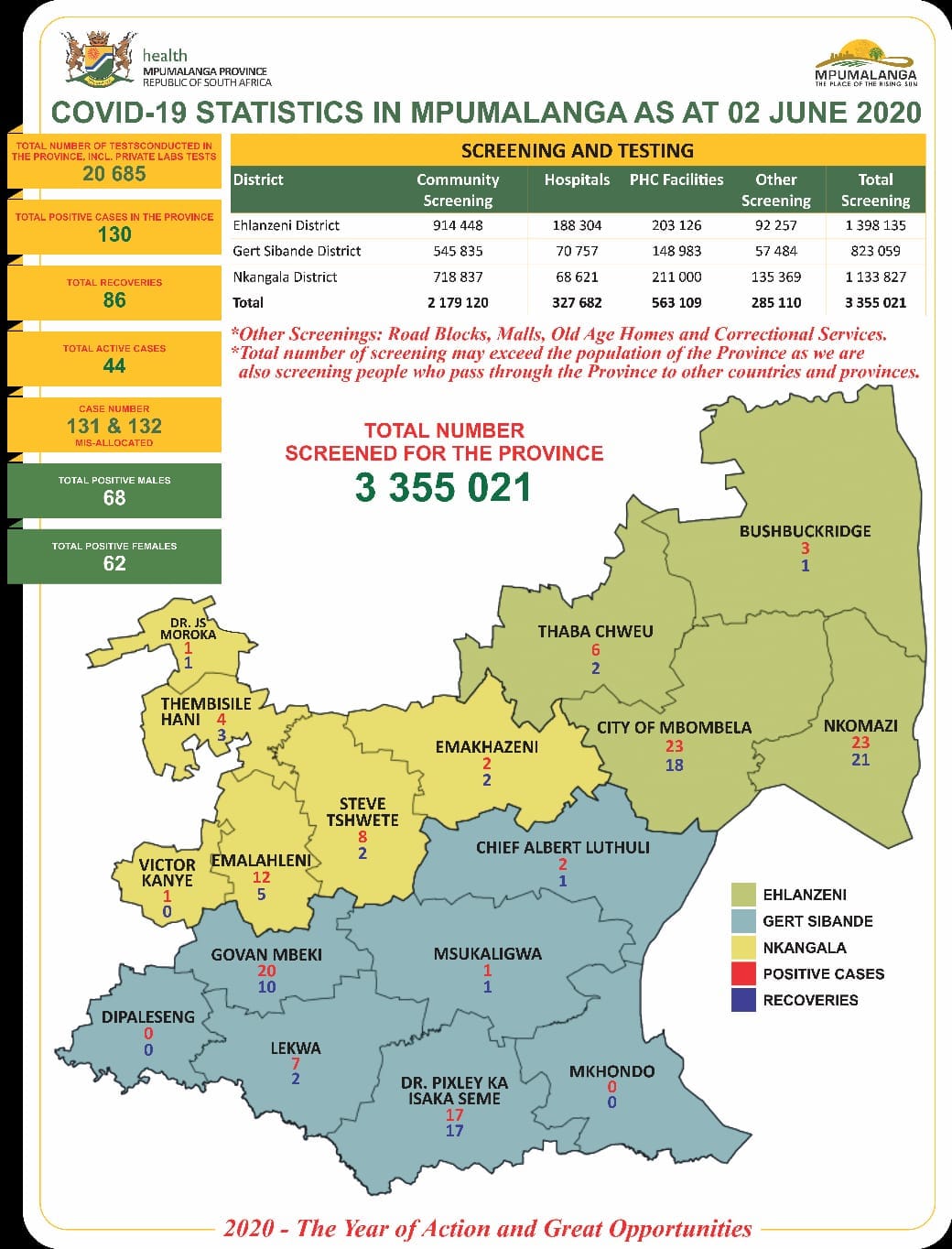 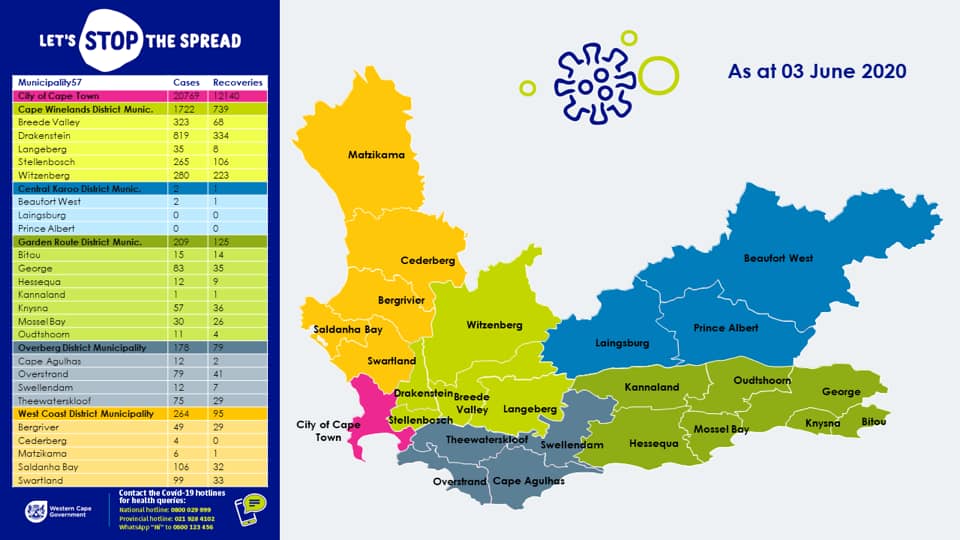 The Eastern Cape’s biggest emergency unit, which is also a dedicated Covid-19 isolation site, has been shut down. The Livingstone Hospital unit faces staff shortages and a shortage of sterile gloves, and doctors complained that the Accident and Emergency Unit has not been cleaned for three days. Kitchen, laundry and porter services have also stopped.

In addition, the state ambulance service has been shut down after an Emergency Medical Services crew member was stabbed in the chest while collecting patients.

As Estelle Ellis writes, this comes just as the province registered the second-most confirmed Covid-19 cases in the country.

Deputy Chief Justice Raymond Zondo is confident that the State Capture Commission will meet its deadline, despite delays caused by the lockdown. Public hearings were postponed, but the commission’s legal and investigation teams have been working remotely. Zondo says the report can be finished by March 2021 by focusing on issues already on the table and those raised by the public protector’s report. The public hearings are due to restart in late June, reports Greg Nicolson.

The government’s chief water adviser, Thami ka Plaatjie, has put himself on indefinite study leave. This comes after City Press revealed that Ka Plaatjie was caught on tape discussing how he and other officials could divide water tanker contracts between them. He is an adviser to Minister of Human Settlements, Water and Sanitation Lindiwe Sisulu – but she says she has not heard of these tapes.

He also heads the national rapid-response team she established in 2019 but had said she would disband after allegations of corruption surfaced. As Ferial Haffajee reports, the team has not been disbanded. More than 1,500 water tankers have been despatched as part of the response to Covid-19, but little information has been given by the department as to who got the contracts.

Meanwhile, private research group Panda has said the projections used by government to prepare for a Covid-19 surge are too high. It is calling for the models used to arrive at a 40,000 Covid-19 death projection to be made public. As Rebecca Davis reports, Panda describes the estimate as “outlandish”.

In Cape Town, the deeds office has reopened after being decontaminated. However, some staff are refusing to work over the quality of personal protective equipment. They also say the opening is a “facade” as no work is being done behind the scenes. Chanel Retief reports that this is having an impact on estate agents, property owners and property renters.

Rugby Africa has cancelled all of its events for the rest of the season because of Covid-19. This means the Springbok Women’s team will miss a key preparation game for next year’s Rugby World Cup. As Yanga Sibembe writes, the team’s coach, SA Rugby and some players have nonetheless welcomed the decision as the best option for all involved because of the possible health risks of going ahead.

More than R250-million was spent on alcohol on Monday in South Africa. Retailers say they were overwhelmed by demand in store and on delivery apps. But they don’t expect the rush to continue, reports Sasha Planting. DM