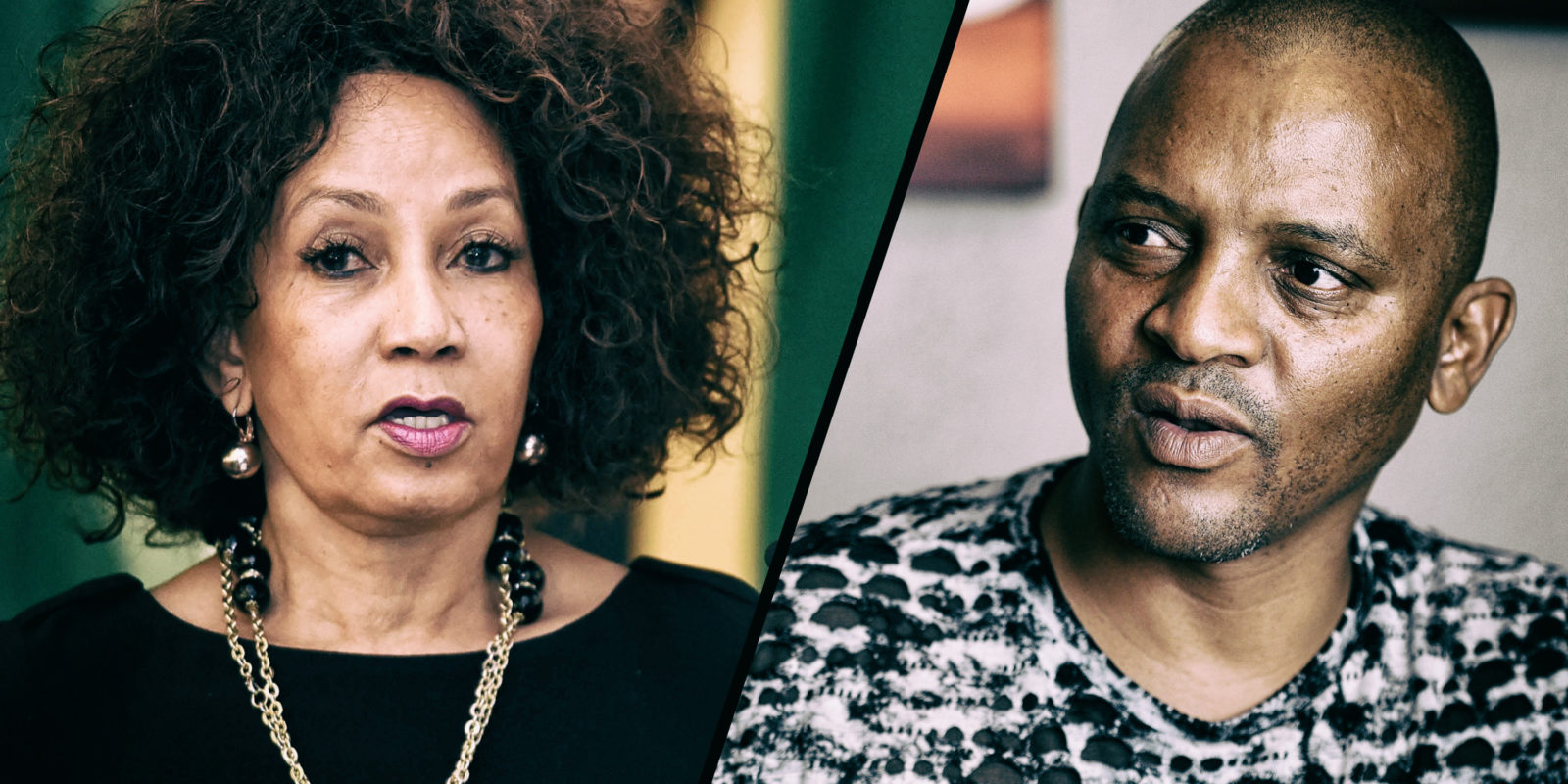 The government’s chief water adviser, Thami ka Plaatjie, who has been caught on tape trying to cut himself and other department bureaucrats into water tanker contracts, is still employed, but has told Daily Maverick that he is on indefinite study leave.

City Press revealed that Ka Plaatjie, who has zero engineering or water expertise, was exposed in a recording discussing how he and colleagues could divvy up water tanker contracts. Water tankers are big business as corruption has stalled water provision and Covid-19 has placed greater urgency on getting emergency connections to rural areas so that people can wash their hands.

“The special leave that I have requested has no time limit. I am also catching up on my studies,” said Ka Plaatjie via the department’s spokesperson. Ka Plaatjie claims he is not being paid on his contract, which is likely worth over R1-million a year. City Press reports Ka Plaatije says on the tape: “I had wanted that we sit down and check how many we can bring and consolidate (water tankers) so that we can all share the slice, because it is a lot.”

The report provides an exposé of how the water tanker contracts are subject to influence-peddling and corruption, but Sisulu told Daily Maverick she had not heard the tape.

“The Minister is not aware of the tape. If the people who have the tape were serious about helping Minister Sisulu clean up corruption at the Department of Water and Sanitation, they should have shared the tape with her,” said Sisulu’s spokesperson McIntosh Polela.

Sisulu brought in Ka Plaatjie as her top water adviser in 2019 to head a national rapid-response task team despite his lack of qualifications for the role. Reports at the time said he was heading a de facto political swat team to help her run for a top ANC role at its next electoral conference. Sisulu ran for ANC president in 2017, but gave up her campaign when it did not get traction; she threw in the towel and put her weight behind President Cyril Ramaphosa’s campaign, but the two fell out because of her support for Palestine when she helmed the International Relations department.

Her alliance with Ka Plaatje could explain why Sisulu has kicked an investigation into him into touch (instead of suspending him), and bundled it into a much bigger investigation into rampant corruption in water provision by Advocate Terry Motau, which her ministry has commissioned.

“Nobody is above the law in my department. Motau will investigate all of these allegations. We would not have invested in a high profile lawyer if we did not intend on cleaning up,” said Sisulu through Polela.

Ka Plaatjie has always been an odd choice as chief water adviser. This is how he describes himself in his biography:

Ka Plaatjie is best-known as a Pan Africanist Congress (PAC) leader who switched sides to the ANC when the party failed.

Early in May this year, Sisulu said she had disbanded her 19-member national rapid response team, which has been mired in controversy. But Polela disputed this in responses to Daily Maverick.

“Two members of the National Rapid Response Task Team were recently relieved of their duties. The remaining members continue with their work. Minister Sisulu has said publicly that members must be vetted to ensure that their ethics are not of questionable standards.”

There are 17 members of the team, but none has experience in water, housing or sanitation, the areas that they must rapidly respond to, as the DA’s Emma Powell has revealed in the table of the original 19 members below. The minister did not reveal the identity of two members who were removed. 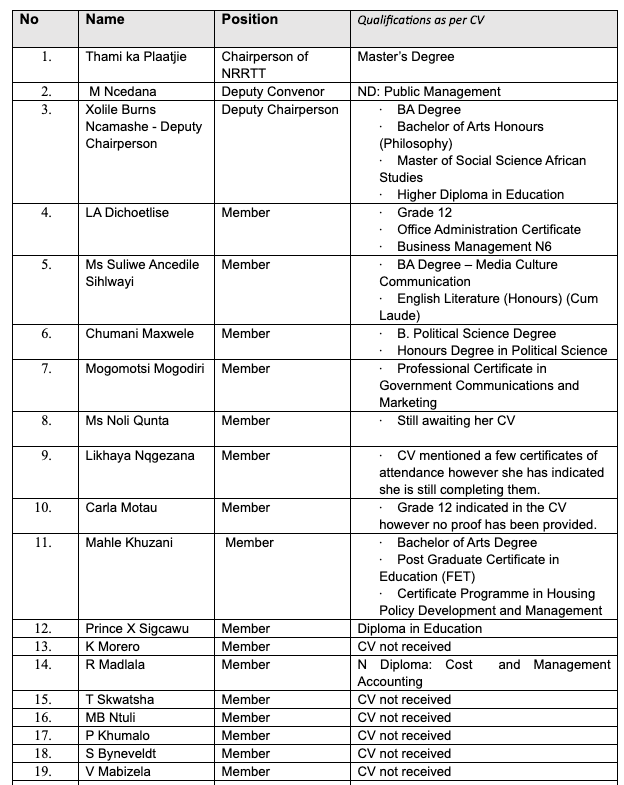 In a two-page letter announcing the disbandment, Sisulu alleged that the team had engaged in insalubrious chats related to corruption and divvying up Covid-19 and other contracts.

“Some members joined to pursue their business interest and/or easy wealth accumulation at the expense of the good cause,” said Sisulu in the letter dated 15 April 2020. The minister has now dialled back from that position to retain a team regarded as a parallel power structure to the already richly resourced and staffed departments of Human Settlements, Sanitation and Water.

No transparency in Covid-19 water and housing contracts

Sisulu’s Department of Human Settlements, Water and Sanitation is, together with the Health Department, taking the lion’s share of budget reallocations to deal with Covid-19. Water tankers are rolling out every day across the country to areas where there is none or poor supply to ensure that when the virus arrives, people have enough to maintain the essential hand hygiene that can be the difference between life and death.

In addition, the settlements component of Sisulu’s department is building temporary housing to provide shelter to homeless people to keep movement to a minimum. Yet, despite calls for transparency in relief and emergency procurement contracts from Auditor-General Kimmy Makwetu, neither of Sisulu’s departments have concurred with requests for contract information.

The Human Settlements department sent a bare-bones list of six contracts, but without scope or financial details while Rand Water, the board which is overseeing the emergency water tanker and water tank provision, refused to provide contract details too.

“We are unable to give the list of third party information, at this stage, without their consent.”  Over 1,500 water tankers had been despatched by 14 May 2020.

Water tankers are assets for corruption

You’d think that water tankers are simple methods of emergency water provision, but in the era of State Capture, they have become instruments of corruption, say experts.

“What we are seeing is a situation where people will destroy infrastructure (taps, pipes, water systems) to benefit from (water tanker and water tank) contracts. There is a real incentive to break public infrastructure instead of fixing pipes and taps. It’s not sustainable,” said a water activist who requested anonymity to comment.

It’s therefore in the public interest to know the detail of how much the state is paying for water tanker and water tank provision, but despite Sisulu now setting up her department and its agencies as corruption-busting entities, Rand Water will not provide the detail that should be publicly available.

Polela says this is not true:

“That is precisely why Minister Sisulu set up the Command Centre at Rand Water. It’s also precisely why the provision of water was centralised, so that there is regular monitoring and accountability. There will also be proper screening post Covid-19 to ensure transparency.”

Polela said the media could avail itself of the invitation to watch screens in real-time to see the water tankers rolling to their destination. However, this will not allow transparency in contracts and price comparisons necessary to assess the contracts, say experts consulted by Daily Maverick. DM