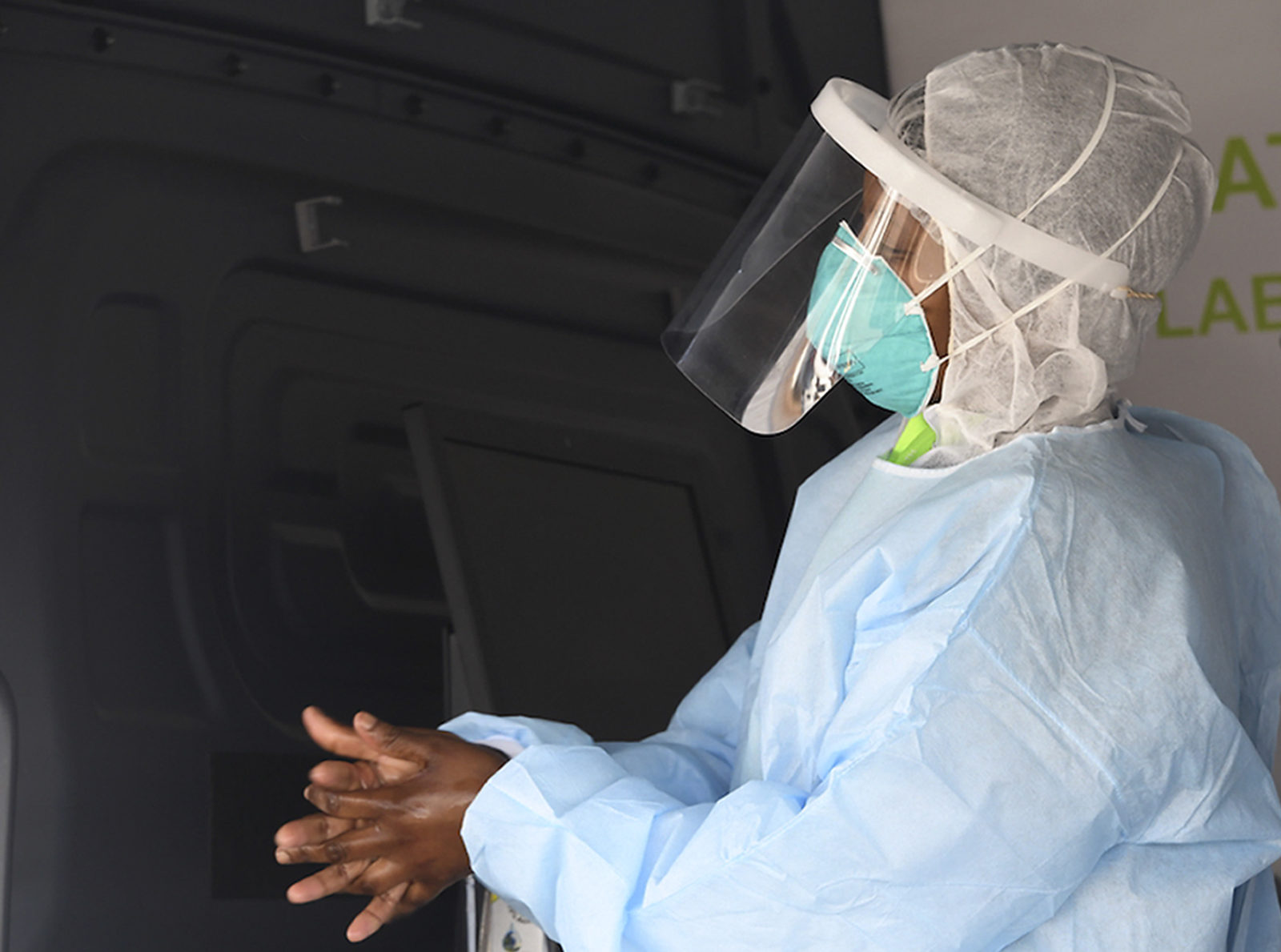 We were told the planned release date for an occupational health policy to protect healthcare workers was World Tuberculosis Day, 24 March 2017. Three World TB Days later and with a new epidemic claiming the lives of healthcare workers we are still waiting for the policy.

“For your first patient, please examine this man with pulmonary tuberculosis [TB]. He has excellent lung signs.”

I was a second-year medical student and this was our group’s first “real life” clinical examination. We were learning about the respiratory system and everybody knew that few diseases could rival TB in terms of the cavitating (ie, causing gaping holes) pathology it wreaked. Yet, a gaping hole of a different kind went entirely unnoticed during our fledgling training – our own vulnerability to TB. Our revered teachers would say, with trademark confidence, “Sure, you will all be infected, but you won’t become sick. So don’t worry about it.”

To quote a comforting medical adage, “the patient is the one with the disease”. This helped us cope with so-called “second-year syndrome”, where students commonly associate any new personal symptoms or signs with a rare and terrible malady they had recently learned about. Hence, the rapid assurances by our seniors that TB disease, despite being the leading cause of death in South Africa, was one less thing to worry about.

A year later the first stirring of doubt cast a fleeting shadow. A classmate became ill with TB. “What was wrong with him/her?” Because we were taught to believe something had to be wrong, right? Another in fourth year, and in fifth year, two in the final year – anomalies, rumours, myths. We shrugged off these troublesome aberrations, because we would be real doctors soon. Those who care for others, not themselves.

A decade later three precocious third-year medical students came to my office in the Division of Haematological Pathology at Tygerberg Hospital. Not because they were interested in the arcane art of examining blood, but because they could not believe that they had been told they were “TB-proof”. Google was quite the thing by now, and it clearly found that they, and all other health workers, were at a three times increased risk of becoming sick with the disease they were supposedly impervious to. Even worse, the risk for drug-resistant TB was up to six-fold higher. Heresy! Except my wife, who worked in the same teaching hospital, was sick with MDR-TB (multidrug-resistant TB) at the time. (Barely) living proof that they were right. The evidence was right. What the fact?

Two years earlier, my cousin, who was also my flatmate and fellow junior doctor at the time, had become ill with TB. Three years later my brother was diagnosed with isoniazid-resistant TB while working at a private hospital. After further inquiry so too had my GP (general practitioner) uncle a decade ago. And he. And she. And yet another one – after every educational talk at least one colleague would come forward. If you tell me your dirty little work secret, so will I.

We were overwhelmed by the magnitude of our ignorance. The magnitude of the most common occupational disease among health workers in South Africa. Hiding in plain sight, yet driven underground by stigma and brinkmanship and fixed false beliefs. Why were patients “no longer” the only ones with the disease?

There are at least three reasons, as it turns out:

This can be a fatal mistake if TB is in the air, yet “the Captain of all these Men of Death” was seen as irrelevant to health workers and inescapable to those we cared for.

Think about that last one for a moment. Even if it were true that health workers were magically immune to TB, what about the other people? You know, those who could get TB. Those who died from it in greater numbers than from any other disease in our country? Primum Non Nocere – Above All, Do No Harm! We were taught this even before I was told to put my head next to the chest of somebody with lethally contagious TB holes in their lungs. Now breathe deeply, please. Even if health workers were knowingly willing to martyr themselves at the altar of medicine, we have no right to ignore the risk to those we care for.

And yet we did, secure in the knowledge of the convenient untruth that at least we were TB-proof. Even as up to a third of health workers hospitalised with drug-resistant TB (you know, that type of TB that we get six times more often than regular people) lost their lives. TB-proof even as TB remained the main cause of death in South Africa. Yes, the third time I am mentioning it, because I have never seen even one front page dedicated to the greatest infectious killer of all time, with more than a billion deaths in the past 200 years and still at number one globally.

The survival rate for MDR-TB when my wife was ill (on best available treatment in 2010), was the same as for Ebola. For XDR-TB (extensively drug-resistant TB), survival chances dropped to those of somebody with lung cancer.

Thankfully, significant progress has been made in the eight years since those third-year students rubbed our faces in our collective and shameful error. We can now diagnose TB and drug-resistant TB faster and more accurately, patients have access to newer drugs which, while not perfect, are safer and increase chances of survival substantially, and patients can access treatment without being admitted, keeping them closer to their loved ones and support networks.

Yet, many, especially senior, colleagues still do not believe TB is an important risk in the air they provide care in. They spent too many years not getting sick (luck or statistical anomalies?) and their less lucky colleagues who did, spent too many years not talking about it. Quiet too were those who shared our air, who had to risk infection and worse, just to access care.

This was changing, but far too slowly. For every courageous TB survivor speaking out, thousands died silently.

In response to this “urgent need to improve existing TB infection, prevention and control measures in South African health care facilities,” the former minister of health, Dr Aaron Motsoaledi, called on his team to develop a far-reaching policy to reduce risk in all spheres of healthcare.

With the support of the WHO, an expert consultant was appointed to write the first draft in 2016. As a community of TB activists and survivors, TB Proof was invited to join the National TB & HIV Occupational Health Policy for Health Workers Steering Committee and following numerous meetings, revisions and stakeholder engagements, the final policy draft was submitted to the legal department as the next step towards finalisation.

We were told the planned release date was World TB Day, 24 March 2017. Three World TB Days later we are still waiting. Numerous excuses have been offered, some valid (eg, the need to do a Socio-Economic Impact Study), but none remotely explaining why this has taken so long.

In his Steve Lawn Annual Memorial Lecture on 2 April 2019, Minister Motsoaledi spoke with great passion and urgency about the plight of health workers, many of whom he nominated to act as national TB ambassadors, and he reiterated his promise of a progressive overarching policy which would finally tackle their risks head-on. When pressed for a release date, his answer did not reflect the pioneering leadership on TB for which he had rightly been rewarded. “It will be released shortly after the elections.” Whether he knew if he would still be there is immaterial. The National Department of Health is still there, and health workers and those they care for are still dying.

Tragically, yet perhaps predictably, they are now also dying from the latest killer pandemic. Like its big brother it also spreads when people breathe. It also kills by arresting such breaths, but not before spreading with invisible efficiency, preying disproportionately on the vulnerable and those who care for them.

If health workers are not safe, nobody is

This time we do not fancy ourselves being Covid-19-proof, but in our haste to protect against SARS-CoV-2 we must remember that it keeps terrible company. Covid-19 is not competing with the staggering number of annual TB and HIV deaths, which we have somehow ceased to be alarmed by, it is aiding and abetting. To echo the SANAC Civil Society Forum’s call, we cannot deal with any of these foes in isolation.

A policy is not a magic spell, and without adequate resources, commitment and leadership it will not effect any changes, but it is a vital start. We, those who breathe and provide care, call on our not so new Minister of Health, Dr Zweli Mkhize, to step into the daunting preventive shoes his predecessor left him and make good on a promise that has reached its third anniversary. Covid-19 demands, as do we, that it grows no older!

I conclude with a picture (with permission) of colleagues who became ill with TB while breathing and caring. They are all bravely using their testimonies to spread awareness about this terrible disease and the fixed false belief about who is at risk. They also speak on behalf of all those we have lost, including more than 1,000 colleagues lost to Covid-19 globally. Their message is simple. If health workers are not safe, nobody is.

And we are sick to death of waiting. DM/MC

*This article was produced for Spotlight – health journalism in the public interest.