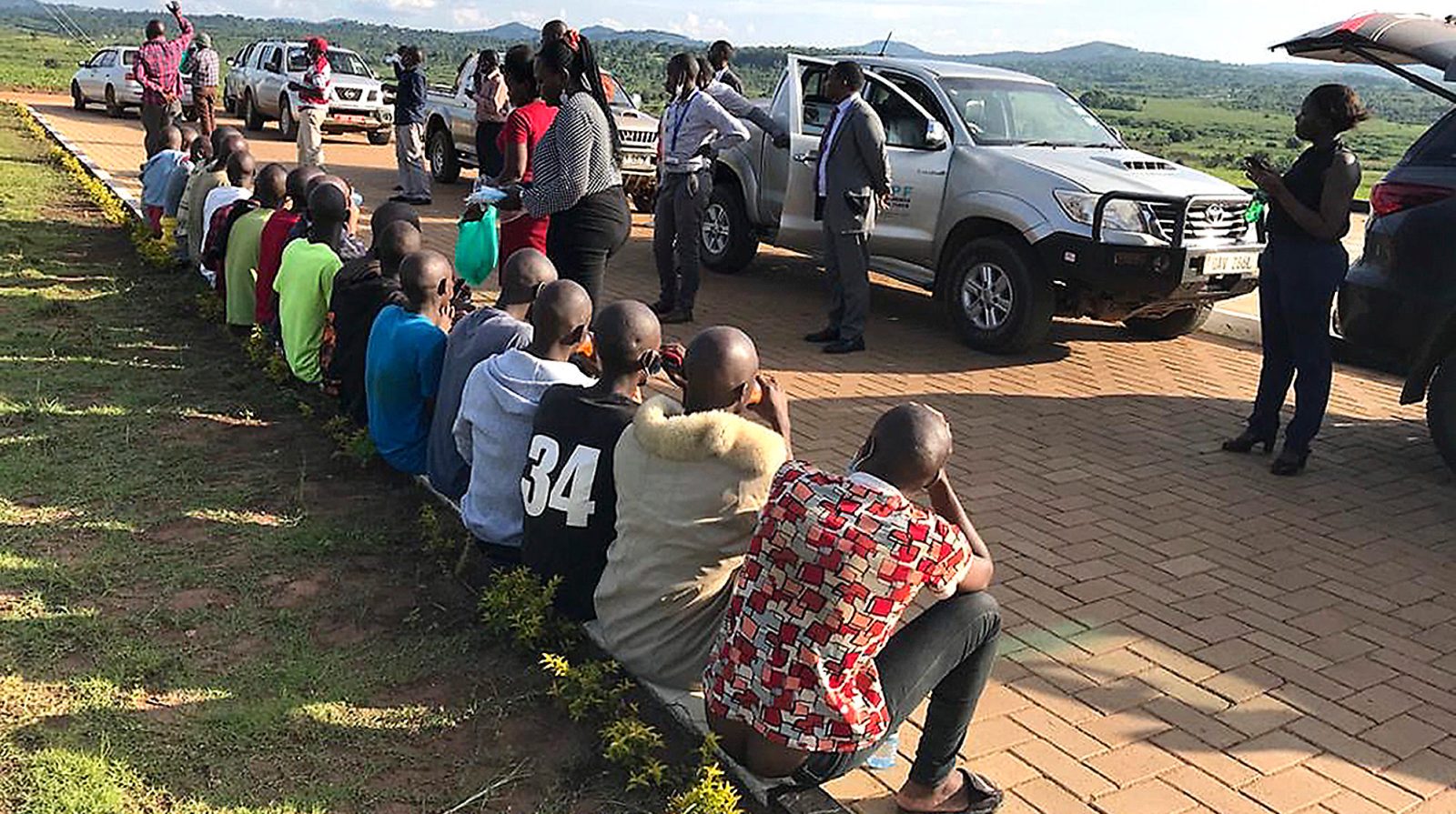 The 20 Youth (seated on pavement) after being formally released from Kitalya Prison on 19th May 2020 with the help of Advocates from( HRAPF) - Human Rights and Awareness Promotion Forum. (Photo: Supplied)

This win demonstrates that it’s possible for marginalised communities that have been further marginalised in the criminal justice system because of Covid-19, to access justice.

On 22 March, Uganda reported its first case of Covid-19. Subsequently, on 30 March, President Yoweri Museveni announced restrictive measures to contain the spread of the virus, which included closing the Ugandan borders both land and air, closing all educational institutions and places of worship, a ban on public and private transport, a ban on public gatherings and meetings of more than 10 people, and a 14-day lockdown followed by a curfew between 7pm and 6.30am.

While enforcing these measures, 20 LGBTQIA youths were arrested on 29 March at a shelter based in Nsangi run by Children of Sun Foundation, a non-governmental organisation that provides shelter services to vulnerable LGBTQIA members in society. These youths were arrested for “doing a negligent act likely to spread infection of a disease” under the guise of flouting the Ministry of Health Covid-19 measures and presidential directives on social gatherings and were later remanded to Kitalya Maximum Security Prison on 31 March.

Such arrests of LGBTQIA members aren’t new because of Uganda’s non-recognition of the LGBTQIA community. In August 2016, Pride celebrations were organised at Club Venom in Kampala and this activity was blocked by the police, who claimed that a gay wedding was taking place. The police locked the gates of the club, arrested more than 16 people (the majority of whom were LGBT activists) and assaulted many in a bid to shut down the celebrations. All those arrested were later released without charge.

The case against the detention of the 20 youths was actively pursued by advocates from Human Rights and Awareness Promotion Forum (HRAPF) who applied to court to visit the suspects while on remand and several organisations, coalitions and activists in and outside Uganda, such as the Coalition to Stop Maternal Mortalities in Uganda, Center for Health, Human Rights and Development, Uganda Key Populations, Sexual Minorities Uganda and HEPS wrote letters to the prime minister and the country director for the World Bank calling for their urgent intervention towards the release of the 20 LGBTQIA youth unconditionally and the State to drop the criminal charges.

All this happened at a time when advocates struggled to be recognised as essential service providers, which greatly frustrated people from accessing justice/judicial remedies while the lockdown was still being implemented by police and security forces.

While addressing the nation on measures taken to combat Covid-19 on 4 May, President Museveni allowed 30 lawyers to practise and the courts later recognised advocates as essential service providers amidst the lockdown. This enabled advocates from HRAPF to visit the youths and challenge their arrest and detention by formally lodging a complaint with the Office of the Director of Public Prosecutions (DPP). The complaint was received and the file was called for review. It was after reviewing the file, that the DPP formally withdrew the charges against the 20 suspects.

On Monday 18 May, the matter was heard in chambers, where a state attorney working at the Office of the DPP informed the court that the criminal charges against the 20 had been formally withdrawn and a letter to that effect from the DPP was tendered in court, which prompted the court to dismiss the criminal charges and acquit the 20 youths. The court later ordered the immediate unconditional release of the youths from Kitalya Prison, where they had been on remand since 31 March.

This win demonstrates that it’s possible for marginalised communities that have been further marginalised in the criminal justice system because of Covid-19, to access justice, especially when they are represented by advocates willing to challenge the status quo and fight for their freedom and rights as LGBTQIA members in society.

It also goes without saying that Ugandan prisons are congested and crowded. Places like these are a serious public health concern considering that bans on social gatherings and social distancing are extremely encouraged in the fight against Covid-19. Failure to adhere to Covid-19 measures in Uganda attracts imprisonment terms ranging from two to 12 months, which is a big flaw in the fight against Covid-19. DM/MC

Paul Wasswa is a Human Rights Lawyer based in Uganda.