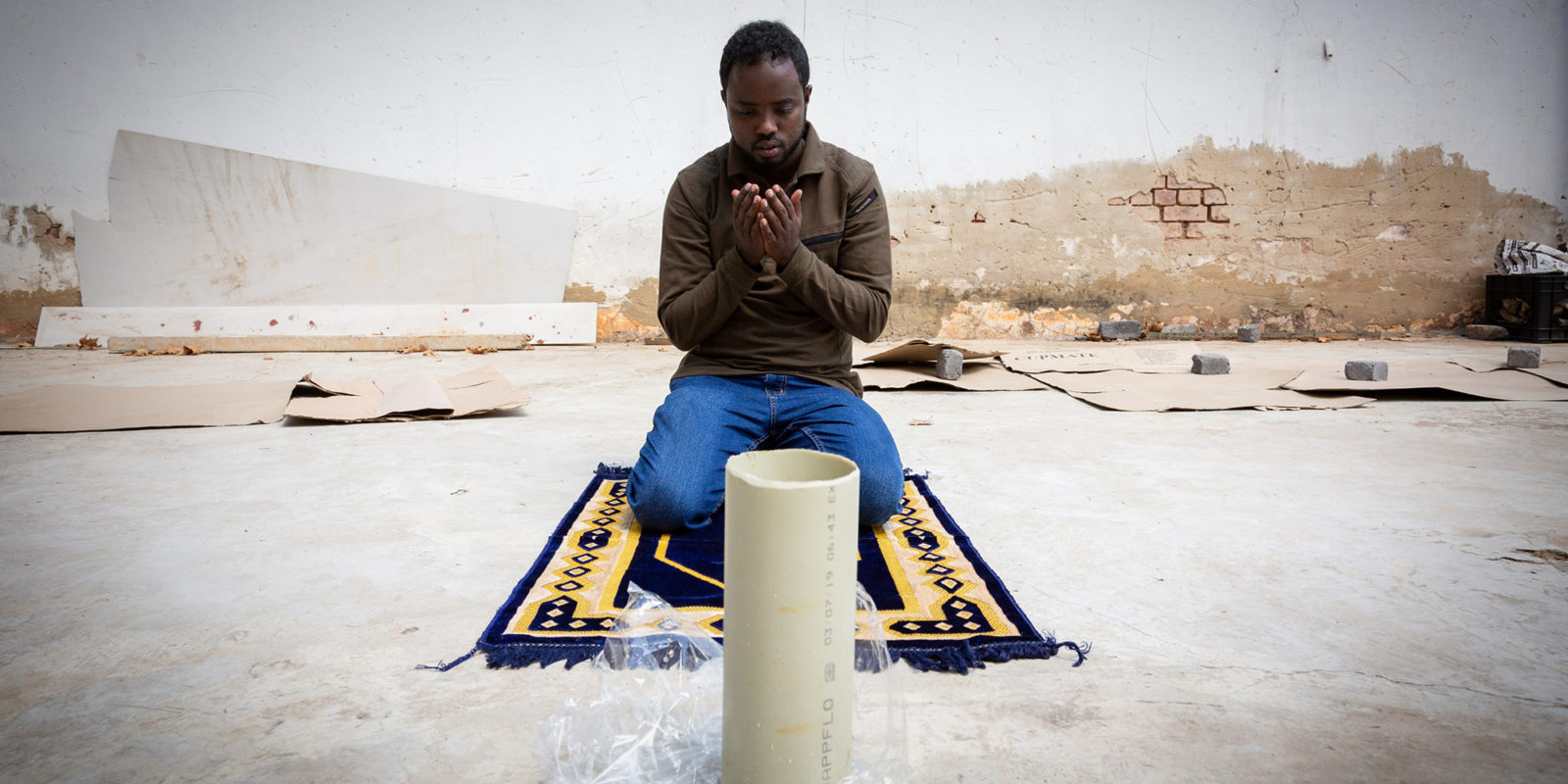 A man prays in a derelict yeard outside a mosque which has been closed in against the outbreak of Covid-19 Coronavirus, in Johannesburg, South Africa, 19 March 2020. (Photo: EPA-EFE/YESHIEL PANCHA)

President Cyril Ramaphosa says the National Coronavirus Command Council has acceded to proposals put forward to it by religious leaders.

Recognised places of worship can resume public services with a maximum of 50 people in attendance when the country moves to Level 3 of the Covid-19 lockdown on 1 June, President Cyril Ramaphosa announced on Monday evening.

Religious gatherings were prohibited during Levels 4 and 5 of the lockdown, except for funerals with a maximum of 50 people, to prevent the rapid spread of Covid-19, but Ramaphosa said the restrictions would be eased as religious leaders could help raise awareness around the pandemic and provide spiritual support to distressed communities.

“Places of worship may reopen subject to strict restrictions, which are absolutely necessary if we are to prevent infections from rising in accordance with norms and standards that will be set out in the regulations,” said the president in a televised address.

He said gatherings will be restricted to “50 people or less”, suggesting some venues may be limited to fewer people to meet physical distancing guidelines. Worshippers must wear masks, and venues must be sanitised before and after services. Rituals that expose people to risk should be avoided, he said.

Ramaphosa said “recognised places of worship” may resume services but it’s unclear whether the Level 3 regulations will impose any standard on what qualifies as “recognised”.

The Commission for the Promotion and Protection of the Rights of Cultural, Religious and Linguistic Communities, a Chapter 9 institution, has recommended laws to regulate churches to prevent unscrupulous behaviour. The proposed legislation has met significant resistance.

“We understand the great impact that the closure of places of worship has had on members of the faith community, and that this has worsened the distress of communities who are unable to worship in congregation,” said Ramaphosa.

“In such a time of crisis, the noble values that are shared by all faith communities have truly come to the fore – of charity and doing good works, of helping the needy, of feeding the hungry and caring for the sick.”

In parts of the country, faith-based communities have provided crucial support on issues such as homelessness and hunger during the lockdown. In Durban, for example, groups from different faiths coordinated their efforts at the start of the lockdown to provide shelter, food and healthcare to the city’s homeless.

There has been concern, however, that Covid-19 could spread rapidly if places of worship do not adhere to hygiene and distancing guidelines. The virus spread in Free State in March after a religious conference in Bloemfontein, which was held before the lockdown. In the Eastern Cape, it spread at funerals where the number of mourners exceeded the regulated limits.

The country also has a number of churches where thousands of congregants gather each week where many worshippers will likely have to be turned away under Level 3 of the lockdown.

Ramaphosa said the National Coronavirus Command Council had acceded to proposals put forward to it by religious leaders.

In a meeting with the president and Cooperative Governance Minister Nkosazana Dlamini Zuma last week, faith-based leaders called for worshipping to resume under Level 3 of the lockdown.

Many religious groups have provided online services for members during the lockdown but they, like many sectors across society, have suffered financially.

“We had to present a case for churches because churches have to pay rates and taxes and there is no income. We hope the minister of local government will pick up on that one,” the South African Council of Churches’ general secretary, Bishop Malusi Mpumlwana, was quoted as saying by News24 after the meeting with Ramaphosa and Dlamini Zuma.

“With congregations no longer gathering during the Covid-19 pandemic, and some of the church members dealing with lost jobs or reduced working hours, the church feels the financial impact,” he said.

Ramaphosa announced a national day of prayer on Sunday 31 May.

“Whether you are a person of faith or not, there is one belief that unites us, and that is our belief in South Africa, in its people, in their courage and in their ability to overcome even the greatest of tribulations,” he said. DM