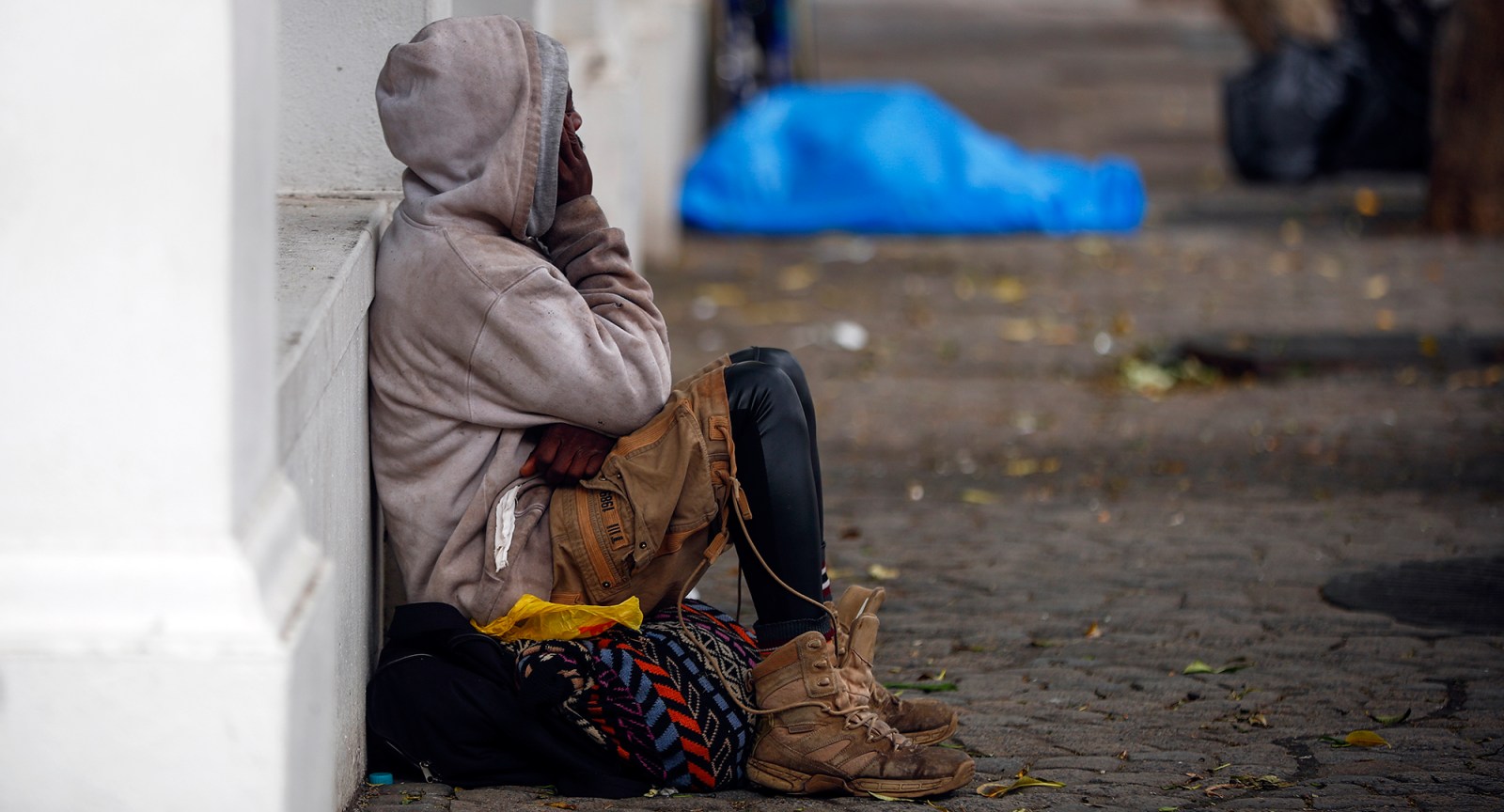 The lockdown is forcing the government to face the reality of homelessness and many cities are still trying to set up shelters with adequate health and safety conditions. It is an opportunity to start reversing years of neglect.

Cities, provinces and civil society networks have moved to provide adequate shelter for South Africa’s homeless people during the first week of the Covid-19 lockdown — implementing different strategies with various levels of speed and success.

The lockdown regulations require the state to identify “temporary shelters that meet the necessary hygiene standards for homeless people” to reduce the spread of Covid-19 and assist them as sources of food on the street, such soup kitchens, begging and donations, dry up.

Municipalities across the country have had different policies for tackling homelessness, but many of them have long neglected the problem, leaving NGOs and faith-based organisations to try to fill the gaps. Most local governments are unsure of how many people are in need.

“This pandemic and the lockdown has brought into sharp focus the extent of the problem,” said the Johannesburg Homeless Network’s Mary Gillet-de Klerk, noting Statistics SA and civil society’s vastly different estimates of the homeless population.

Gauteng acting social development MEC Panyaza Lesufi initially believed 15,000 homeless people in the province would need shelter. A week into the lockdown, his department revised its estimate to 54,000 people.

“We underestimated the number of this community,” he told Power 987 on Thursday.

Even before the lockdown, there were too few shelters in the country’s three most populated cities, Johannesburg, Cape Town and Durban. Municipalities and civil society groups are now pushing to establish temporary sites.

Durban has been a standout. In the first few days of the lockdown, members of NGOs, the eThekwini municipality and religious groups screened 2,000 people at the Durban Exhibition Centre.

They were screened by volunteer health workers for Covid-19 (there were no cases) as well as other medical conditions and 1,700 people were then moved into temporary accommodation, including 12 tented sites for men, three buildings for women and one for women and children.

Illa Thompson from the Denis Hurley Centre, which is a member of the National Homeless Network, said “the lion’s share” of Durban’s homeless were willing to engage and the city was a step ahead of others due to close collaboration between the civil society sector, faith-based organisations and the municipality, particularly the deputy city manager and deputy mayor.

Collaboration between different religious communities in Durban has been key and Father Stephen Tully said, “If there’s a focus on doing something for the poor, the theological arguments are put aside, because you’ve got to feed someone.”

The response has been slower in Cape Town and Johannesburg.

Existing homeless shelters in Cape Town quickly filled to capacity and, as of Thursday 2 April, the city had only provided shelter for an extra 280 people in tents at the Culemborg Bridge. The municipality has announced it will provide shelter at the Strandfontein Sports Ground, which is expected to accommodate 4,000 people.

Rowen Ravera from U-turn, which has been delivering food across the city and focuses on rehabilitating the homeless, said, “Since the beginning of the lockdown there have been thousands of people who are homeless and who are now stranded on the streets of Cape Town with limited access to food and water.”

Ravera said the city should consider using smaller shelters to ensure physical distancing. “A solution would be for the city to co-ordinate and communicate with civic organisations on the ground, to leverage their established knowledge.”

Leona Pienaar, CEO of MES, which runs shelters across the country, said, “The Western Cape is still uncertain. Many parties are in discussion, but they are not including the not-for-profit sector yet.”

MES’s Safe Space shelter in Cape Town caters for 67 people. Once it had filled up, an additional 300 people showed up looking for a bed on the day of the lockdown. They were registered but turned away.

“One week later and still no alternative option,” said Pienaar.

Gillet-de Klerk said civil society was working with the City of Johannesburg, which was “scrambling” to establish temporary shelters. One site, accommodating 86 people, was established in Windsor West and the city was expected to announce further sites on Friday.

Pienaar said MES’s two overnight shelters in Johannesburg had been turned into lockdown shelters and it had opened another facility in the city at the request of the provincial department of social development (DSD).

“DSD Gauteng has been very supportive and daily communication is in place; the same with Ekurhuleni,” said Pienaar.

She added, “There are many still on the street, desperately hungry due to the closing down of nutrition centres.”

Shelters are also dealing with issues of substance addiction, boredom and theft. Some are providing drug addicts with methadone to cope with their withdrawals and have been getting assistance from rehabilitation and healthcare volunteers.

“They do not adapt well to being indoors all day, but, with guidance and discussions, they do eventually settle down. There have, however, been a few that absconded – mainly due to addiction challenges,” explained Pienaar.

Ravera said, “The vast majority of people on the street struggle with addiction, as well as mental health issues and trauma. It is potentially a very volatile situation and puts many people at risk.”

“Forced and involuntary withdrawal will be a huge problem unless carefully managed within a temporary space, including access to methadone and suboxone so withdrawal can be managed.”

Hundreds of homeless people were reported to have left Caledonian Stadium in Pretoria, where they were being sheltered, due to overcrowding and food shortages. The City of Tshwane has since been trying to improve conditions and relocate some of the more than 2,000 people staying in the stadium to other temporary shelters.

The drive to provide shelter to the homeless is unprecedented and stakeholders believe it has the potential to reduce the number of people living on the streets after the lockdown ends.

“We have to really look at sustainable solutions, because what are we going to do after the lockdown? Are we just going to open the gates and say go back to the streets?” asked Gillet-de Klerk.

She said shelters are the first step to accessing further support, including dealing with substance abuse and mental health issues, skills development, transitional housing and family reunification, and the government needs to look at establishing more permanent shelters.

The City of Cape Town said while it won’t be housing the homeless in the many sites recommended by civil society groups, “work will get underway in the months to come, once the coronavirus crisis has been dealt with, to assess the feasibility of these as potential permanent shelter sites”.

Lesufi said it would be “a miscarriage of justice” if people were put back onto the streets after the lockdown. He said the Gauteng government wanted to use the opportunity to assist the homeless in getting identity documents and accessing education opportunities.

Thompson said it had been “quite extraordinary” how people had come together in Durban to support the homeless. More permanent shelters should be set up and use made of resources already donated.

“None of these solutions are permanent, but hopefully the mindset will be,” said Thompson. DM