The partisan distribution of basic necessities is cause for concern 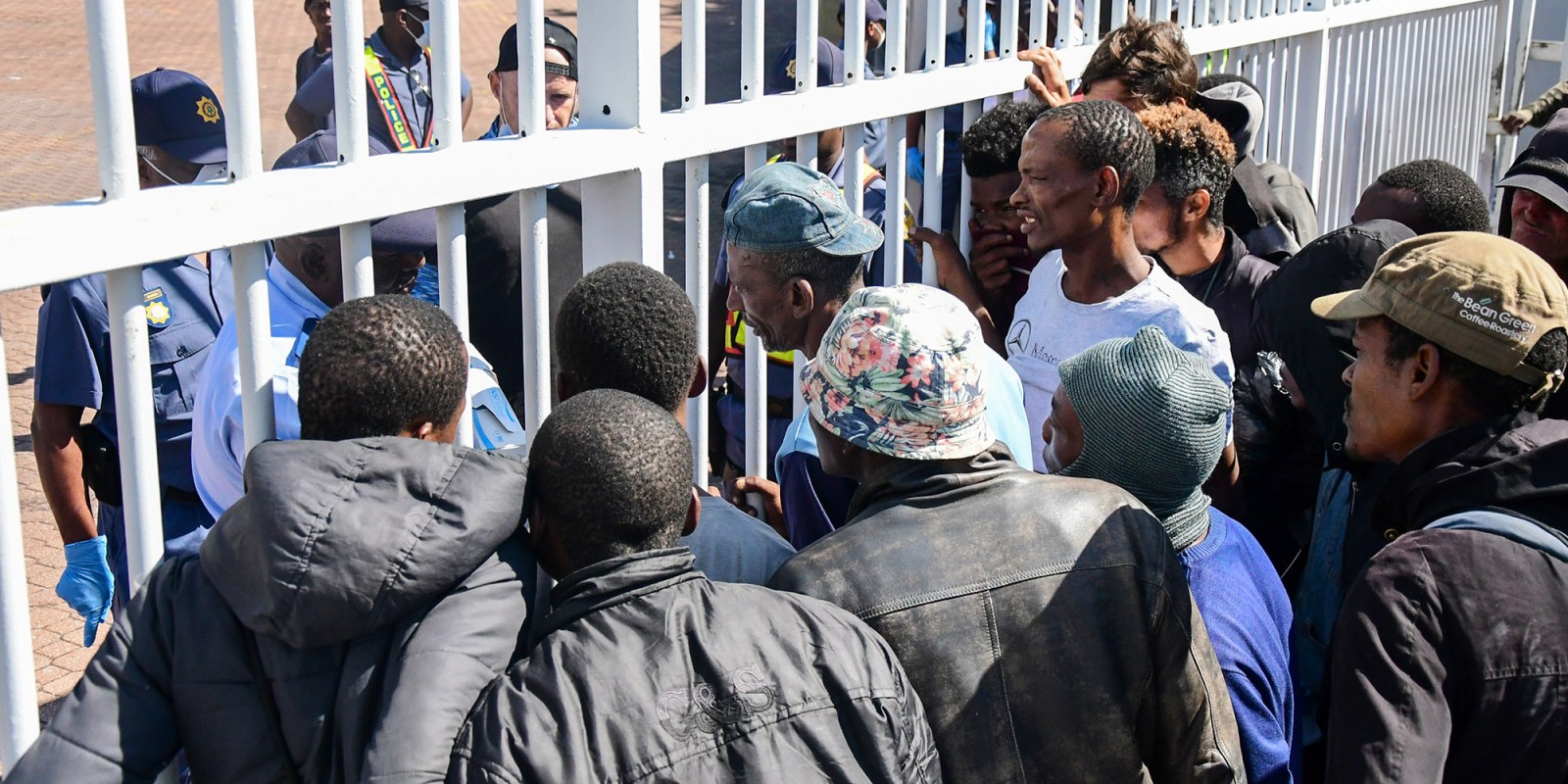 Homeless people question the police and volunteers regarding food on Day 2 of National Lockdown at the Durban Exhibition Centre on March 28, 2020 in Durban, South Africa. (Photo: Gallo Images/Darren Stewart)

The nationwide lockdown has left many vulnerable South African families unable to meet their basic needs. And although the government has committed itself to taking care of the country’s poor at this time, corruption and party politicking continues to leave communities hungry and desperate.

Residents of Mahlabathini in KwaZulu-Natal have accused their ward councillor, Sibusiso Buthelezi, of politicising the distribution of food parcels.

Unemployed mother of five, Clara, who did not want to give her real name for fear of victimisation, lives in Buthelezi’s ward. She lost her husband and sole breadwinner in January 2019 and has not received any food from the local administration.

“I’ve seen so many people on TV receiving food parcels, but here, many of us have not received any assistance from our councillor,” she said.

“I heard that he (the councillor) gave food parcels to some residents who live close to him. Later, I saw several people carrying those food parcels,” she said.

Clara said when she spoke to the recipients, she was told that the ward councillor had called some residents to collect parcels from him.

“He often tells us that he looks out for people who vote IFP and support him,” claimed the grandmother of two.

Life has not been easy for her family since her husband’s death. With the little that he brought in, he managed to feed his children and grandchildren. But 2020 has brought with it more trouble than she could ever have bargained for.

As is the case with many South Africans, the coronavirus pandemic has seriously affected her ability to bring in money and take care of her family. Under lockdown, she has been unable to take on any of the casual jobs that she and some of her children would do under normal circumstances.

Two of her children had set their sights on studying at universities this year, but failed to secure funding from the National Student Financial Aid Scheme (NSFAS). After Covid-19 hit South African shores, resulting in the nationwide lockdown, the family of eight has all but lost hope of their lives improving.

“My husband used to work as a casual employee so we did not receive any benefits after he passed on. So we are left with nothing.”

David, who also asked us to conceal his real identity, said he too has not received any food parcels despite being in need of assistance.

“Nothing was communicated to us. I asked a member of the ward committee and she said the councillor had instructed her to take the names of two families on this side of the ward, and another two elsewhere,” he said.

David, who is unemployed, said he would have understood if the food parcels were donated by political parties for their voters.

“We heard on the radio that food parcels will be given out as government aid, and that businesses and individuals contributed to a fund,” he said.

Despite not having any means to earn an income during the lockdown, he still does not know if he will receive the much-needed relief.

David said he too had heard that parcels were being handed to people who had voted IFP.

“I don’t know why he says that because how will he know who voted for him? A person’s vote is a secret so it doesn’t make sense when he says that.”

Ncamsile Mkhize, a mother of three, says she has been unemployed for a long time. She, too, has not received any food parcels. She says that after an outcry from those who were allegedly left out by the councillor, residents decided to take matters into their own hands.

“We wrote our names and other details such as ID numbers on a page and gave them to the councillor to consider us for food parcels,” she said.

“We don’t know if that will result in us receiving food parcels but we can’t sit and wait around for them (ward committee) to get to us.”

In addition to Ncamsile, David, Clara and four other residents have confirmed to Daily Maverick that they put their names down for food parcels on lists that other residents had created to hand over to the councillor.

Responding to the allegations that food parcels were being distributed along party lines, Councillor Buthelezi said he is “not that kind of person”.

“Who said that?” he asked. “Whoever it is that said that, please tell them that I am not that kind of person.”

On the same day, the councillor said he had distributed 50 food parcels to families whose applications were approved by Sassa.

The procedure to apply for food parcels, he said, entails first getting clarity from Sassa about the criteria needed to qualify for food parcels. Buthelezi said his office then sends lists of names of those who meet the requirements to the Sassa office. There they are screened further to determine who qualifies.

“Not everyone can receive food parcels because that would be chaos,” said the IFP councillor.

Mpanjwa lives in a household of nine people and was one of the relatively lucky ones. She said a member of the local ward committee came to her home and took down her family’s details. Roughly two weeks later, she received a call informing her that her food parcel was ready for collection.

“We don’t decide on the basis of [political affiliation] or friends,” said Buthelezi.

“We identify people because we can’t call the entire community to apply for food parcels because if we do that, we will cause chaos. We have war rooms that we use. We do this through war rooms, social services and ward committees.”

According to the Sassa website, people who qualify for food parcels are those who are unemployed and do not receive any other social grant.

Buthelezi is not the first to be accused of politicising the distribution of food parcels. Across the country, communities and their representatives have cried foul, accusing both local government and charities of unfair distribution.

Addressing the nation on Monday 11 May, Social Development Minister Lindiwe Zulu said the department is aware of issues that have arisen across the country.

“Our concern is the uncoordinated distribution of food,” said the minister.

“This uncoordinated food distribution creates duplication and … corruption challenges. While proper coordination structures and mechanisms at national, provincial and local structures exist, we acknowledge it might not necessarily be enough,” added Zulu.

Daily Maverick made several attempts to ascertain the number of food parcels Sassa has allocated to Ward 14 of the Zululand district municipality where Buthelezi is the ward councillor. Sassa has not responded to our request for information. DM