Groote Schuur: The big barn is getting ready for a Covid-19 surge 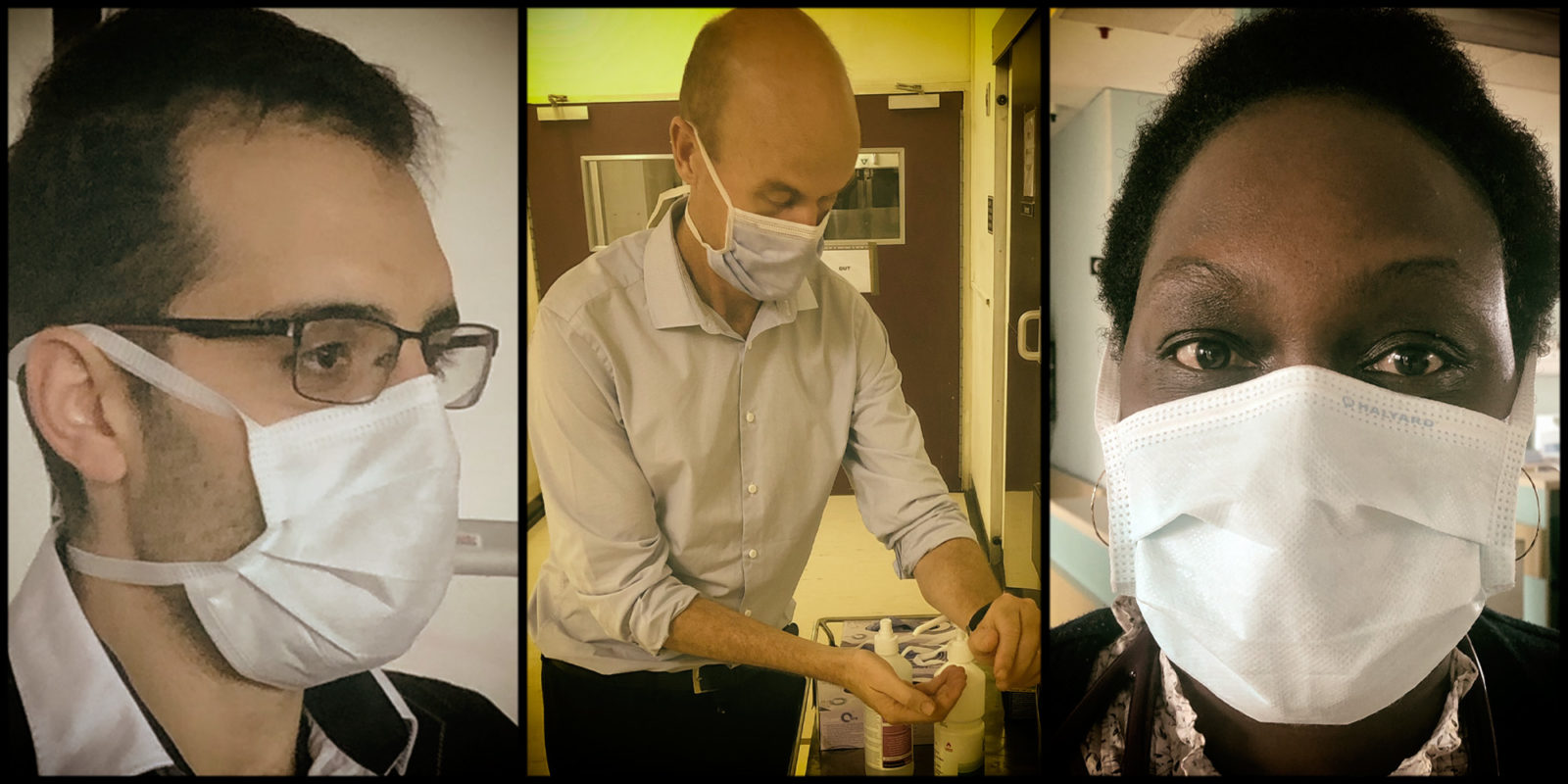 Professor Graeme Meintjes, centre, and his colleagues at Groote Schuur Hospital in Cape Town are preparing for a rise in Covid-19 patients over the coming weeks and months. (Photos: supplied)

A public sector doctor at the frontline describes what it’s like getting a huge hospital ready for a potential pandemic storm surge.

Professor Graeme Meintjes is accustomed to looking big infectious diseases in the eye and wrestling with them. He was at the frontlines of the HIV epidemic when 10 young people were dying each day at Jooste Hospital on the Cape Flats.

His CV is the story of a life spent studying how to understand, and then fight, drug-resistant TB and meningitis. This time he is planning for an anticipated Covid-19 surge, along with colleagues at Groote Schuur Hospital – named after a large barn and one of South Africa’s biggest hospitals.

“We are not powerless in the face of this (Covid-19) and we can reduce risks if we work together and put in place the right practices,” says Meintjes, who is one of about 600 doctors at Groote Schuur.

For a month now, the hospital has been on Covid-19 alert and doctors like Meintjes spend 95% of their time planning for when the virus moves into a phase called the surge – when growth becomes exponential. Groote Schuur is now taking only a small number of the 500,000 outpatients and 75,000 inpatients it sees a year. The average 2,000 operations a month are down significantly and doctors are trying to discharge patients more quickly to free up space and give them time to plan.

South Africa is on the cusp of the surge but, unlike with other pandemics he has battled, this one has a manual. Africa and South Africa are still at a low death curve and the numbers of cases are now north of 3,000 and growing.

We can learn from China, Europe and the US to understand how the virus moves and what health workers can do to help reduce the infection rate in institutions like Groote Schuur, Chris Hani Baragwanath and the other 400 clinics, hospitals and other health facilities that could take the brunt of exponential viral growth.

“What is coming out in the international literature about the deaths of Chinese health workers in the early days of the epidemic is that they hadn’t had time to plan.”  The doctor who alerted China and the world to the novel coronavirus died.

No hospital prepares alone as clinical guidelines are set at the headquarters for managing the South African epidemic, the National Institute of Communicable Diseases in Johannesburg. The team there revises these regularly and they are “responsive and agile in updating (the guidelines)”.

“It’s so important to have institutions and a group of experts at the national level doing a standardised thing,” says Meintjes, adding, “The lockdown gave us the time to put in place the plans for a surge. (If enough) education has gone out into the community, and if there is sufficient community testing, the viral slope will be less steep than in other countries. It has given us the space to cope relatively better and provided us with the ability to do things that take time, like designating wards, building teams, getting health workers psychologically prepared, planning the workflow in wards.”

From porters to professors

It must be quite terrifying to see the scenes of overwhelmed healthcare workers of the NHS in the UK, or the field hospitals in New York with gurneys wheeling out those who have died. Frightening, too, to read the letters written by doctors in Italian hospitals about what happens when the virus hits hard.

Meintjes is a physician, a specialisation which puts him at the frontline of patient care, with no space for panic. Instead, what they do day in and day out is practice, practice, practice with all staff from the professors to the porters.

“The whole hospital is impacted. We’re in lockdown so no outpatients (bar emergencies) are being seen. When we reach the stage of widespread community transmission, it’s an all-hospital procedure,” he explains.

Because this coronavirus is so infectious, a lot of Groote Schuur’s preparatory work is in teaching health care workers how to put on, use and take off the personal protective gear to prevent cross-contamination. Again and again and again. Training takes place once or twice a day at Groote Schuur in sessions run by a registrar using video and other tools such as mnemonics. “If you get a surge, you need to minimise infections to staff, and that requires meticulous planning,” says Meintjes.

Whichever assumption turns out to be right, Groote Schuur will need special Covid-19 wards. Four have already been set aside. There is also provision for a special ICU ward. While South Africa is not yet in the surge, “there’s (already) quite a load on the service.  At all hospitals, anyone admitted with new respiratory symptoms that could be related to bronchitis, TB or smoking-related illnesses must be swabbed (for Covid-19),” says the doctor, adding “that will persist as we move into winter (when general respiratory illness rises)”.

Now, these patients have to be treated as being under investigation for Covid-19 until their test results come back. The preparations over many weeks have made this manageable. “There’s a great amount of fear among healthcare staff and people have to know that they can discuss it. Not knowing what to expect is anxiety-provoking. PPE training, by registrar Tari Papavarnavas, gives people agency and quantifies the danger into high, medium or low risk,” says Meintjes, adding that Groote Schuur currently has sufficient gear in stock to cope.

Because of the nature of the virus’s import into South Africa, it is the private hospitals like St. Augustines in Durban that are at the centre of the storm of health worker infection. This has given the public sector hospitals space to prepare and Groote Schuur, with an 80-year history of innovation (it gave SA its first CAT scan, first heart transplant and the first ICU unit in the country), is well-placed. Its history in bravely managing HIV and Aids in the time of political denial is another good medical asset in the eye of the Covid-19 storm.

In the hospital’s history book, it records that during 1998, more than 50% of inpatient beds in the paediatric ward at Groote Schuur was occupied by children sick and dying from HIV and Aids. Doctors at the hospital started a treatment programme in the face of obstinate government refusal to do so. They saved thousands of lives but also armed themselves with a system of planning for infectious disease surges.

“The single biggest difference this time is the political commitment of the government,” says Meintjes. DM