River Club project has not been halted despite heritage appeal ruling, decision is still awaiting 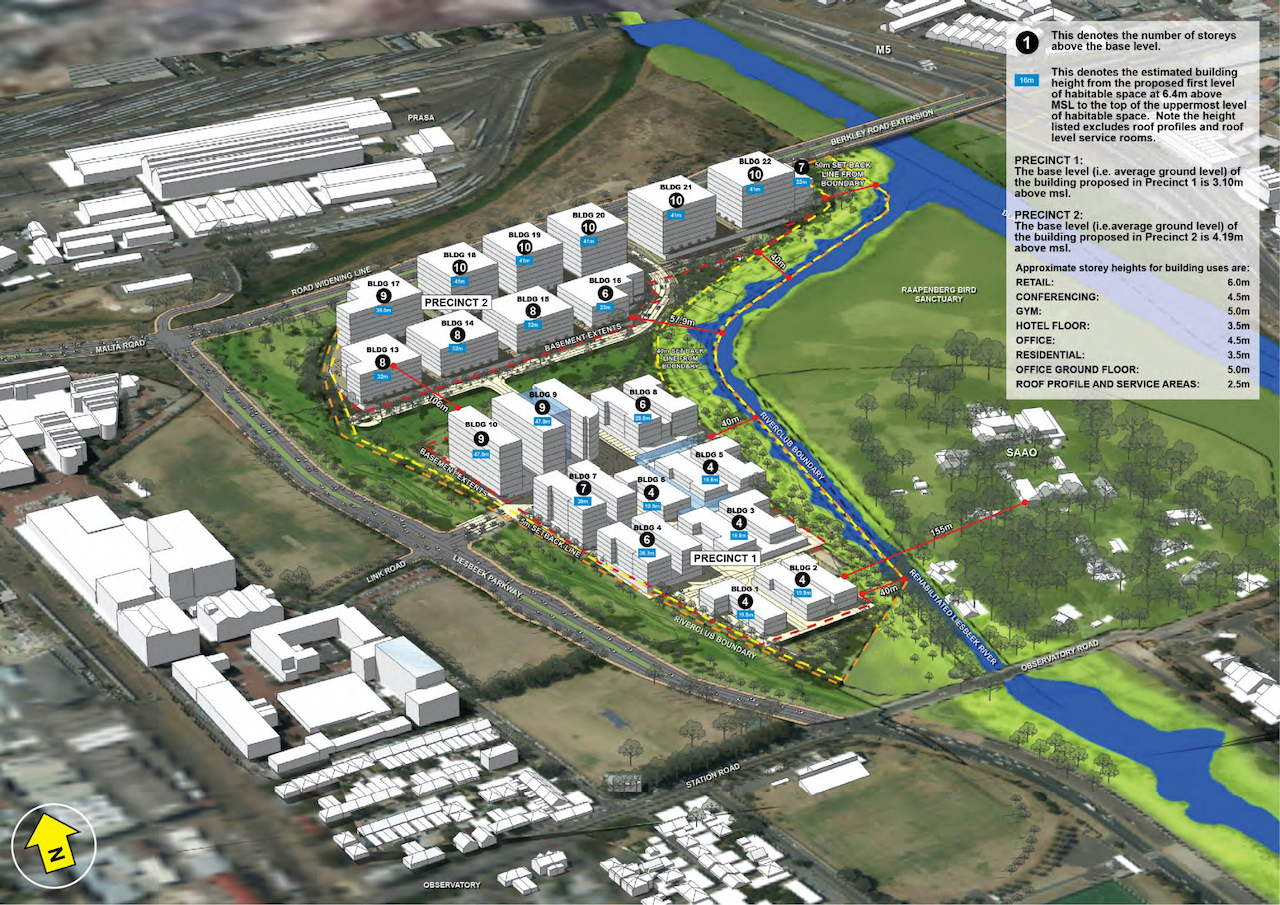 An impression of the proposed River Club development contained in the Basic Assessment Report, a public document produced by SRK Consulting.

In this right of reply, the developers of a controversial development proposal in Observatory, Cape Town, say an appeal ruling by Heritage Western Cape is effectively moot and the decision rests now the Western Cape Government’s Department of Environmental Affairs and Development Planning.

First of all, the proposed River Club project – a mixed-use, mixed income development in Observatory that will create over 6,000 jobs and attract international investment – has not, in fact, been halted.

The Heritage Appeal Tribunal ruling reported on in the article has no material impact on the progress of the development whatsoever. The tribunal simply dismissed our appeal – lodged two years ago – against a provisional protection order that Heritage Western Cape (HWC) had placed over the site in 2018.

We had lodged an appeal against the provisional protection order for the lack of procedural fairness of HWC’s decision to provisionally protect the River Club site.

So, the development has certainly not been halted. On the contrary, a Basic Assessment Report, which includes a comprehensive and independent Heritage Impact Assessment, has been submitted to the Western Cape Government’s Department of Environmental Affairs and Development Planning for their final consideration and decision. The Basic Assessment Report was compiled after extensive public participation and expert consultation.

Second, we believe it is not true – as the article suggests – that halting the development would be a victory for the First Nation’s people. Indeed, the project enjoys the support of the majority of First Nations leaders historically located in the area of the site.

There have been extensive, transparent and constructive public engagements with all interested and affected parties including the majority of Khoi and San mandated leaders, known as the First Nations Collective. This includes the Gorinhaiqua, Cochoqua, Gorachouqua and the San First Nation groups who used to historically settle on the River Club and Two Rivers land.

Based on these engagements, the First Nations Collective has expressed its full and unequivocal support for the River Club redevelopment both publicly and directly before HWC. In essence, the collective recognises that the proposed project will provide opportunities to reclaim, share and celebrate First Nations heritage with the public.

Furthermore, the history of the First Nations in the area will be visually commemorated by incorporating various symbols central to the First Nations narrative in the designs of the buildings throughout the development.

The Heritage Appeal Tribunal Committee was aware that all of these key heritage components were included in the information submitted to HWC as part of the Heritage Impact Assessment. This was also presented on numerous occasions by the First Nations Collective who were in attendance at the Appeal Tribunal and confirmed their support for the development. Inexplicably, the tribunal appears to have completely ignored this.

Instead, the tribunal appears to have been used for political purposes. Despite every effort to engage other First Nations groupings not historically located at the River Club land, through the Heritage Impact Assessment public participation process, these other groups elected on their own, not to engage. Instead, they used the appeal tribunal as a vocal political platform to voice objection.

Aside from the substantive heritage considerations, the tribunal’s finding also appears to have ignored decided case law and legal precedent. Suffice it to say, we do not agree with the tribunal’s ruling and our legal counsel’s considered view is that it would not survive scrutiny on judicial review. But given that the provisional protection order expired on 20 April 2020, this falls away.

We will, therefore, continue to progress our application via the correct channels. The recession the country faces – now amplified by the Covid-19 crisis – highlights the urgent need for responsible and inclusive socio-economic development and the proposed R4-billion River Club redevelopment is exactly that.

This project will create thousands of vital jobs on private land that is centrally located but severely underutilised. The project will also offer vital socio-economic benefits including an accessible school, inclusive housing, major upgrades to surrounding road infrastructure and public transport facilities, rehabilitation of the riverine corridor, and dedicated safe recreational spaces that will be open to the public.

The Liesbeek Leisure Properties Trust remains committed to working with all stakeholders to create a more inclusive and sustainable city and province. DM