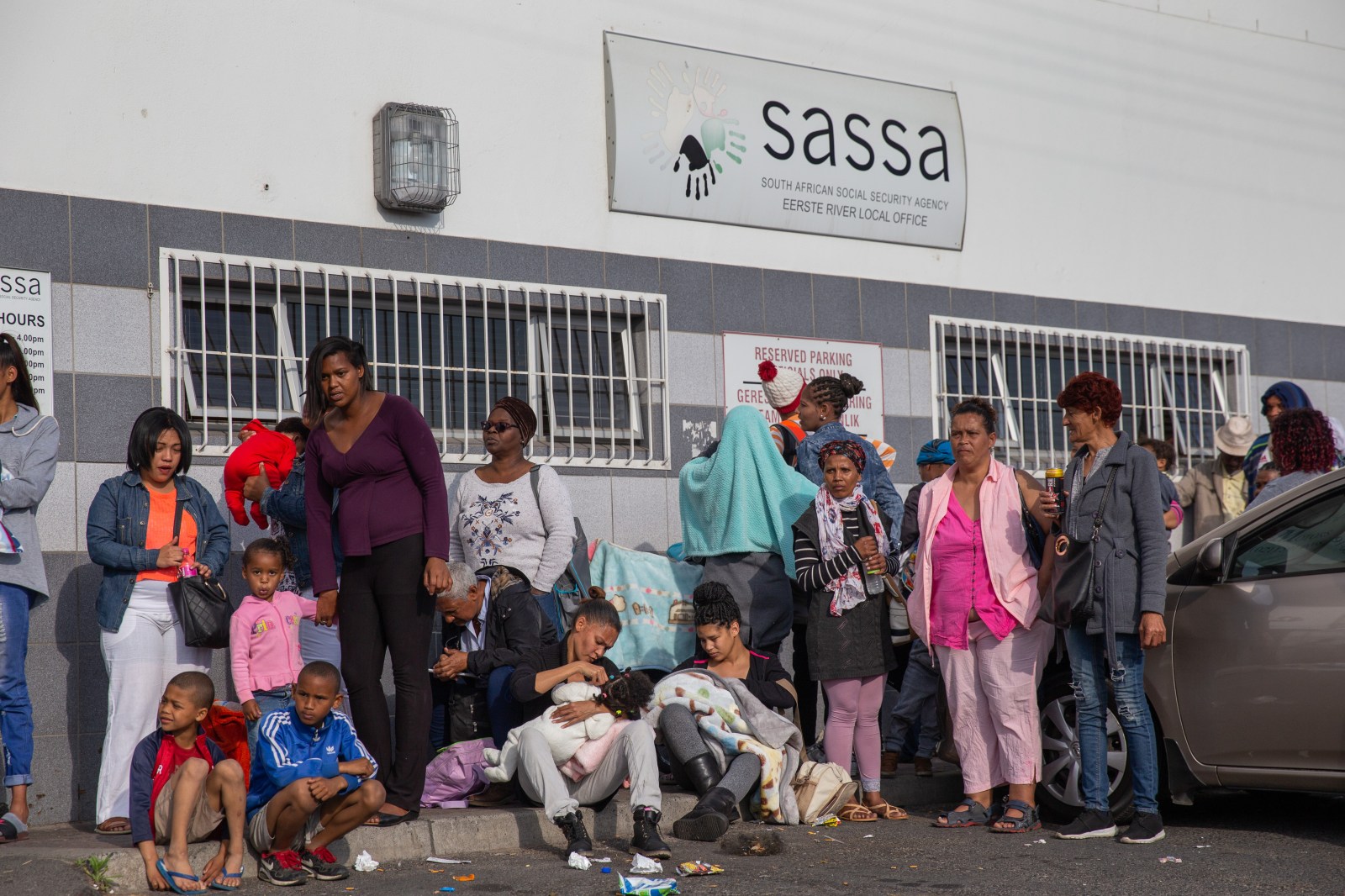 A rapid increase in hunger levels in the poorest households undermines people’s ability to comply with the lockdown.

The expansion of social grants can be viewed as one of the greatest post-1994 redistributive achievements in South Africa. Social grants provide financial relief to the most vulnerable: the elderly, children, and people with disabilities. However, there is no social income support for able-bodied people who have little to no income between the ages of 18 years, after which the Child Support Grant ends, and 59, after which the Old Age Pension kicks in.

In 2020 there are over 18 million grant beneficiaries. According to Stats SA’s 2019 fourth quarter report, approximately 10.2 million people were unemployed before the Covid-19 crisis, and economic growth was forecast at 0.8% (on the back of 0.7% growth in 2019). Unemployment (including discouraged work seekers) was effectively at 40%.

Three weeks into a State of Disaster and an almost complete lockdown of the economy, we can only guess how many more people are unemployed now. On Tuesday, 14 April, Finance Minister Tito Mboweni said that the South African Reserve Bank expects GDP in 2020 to contract by 6.1%. Three weeks before this, on 27 March 2020, Moody’s downgraded South Africa to “junk” because, amongst other reasons, GDP was expected to contract by 0.2%. Some economists are predicting that the number of jobs lost could be in the millions.

In this period, beneficiaries will continue to receive their (inadequate) social grants, but those in the informal economy who are self-employed or semi-employed in marginal enterprises are likely to suffer a massive income shock. A rapid increase in hunger levels in the poorest households undermines people’s ability to comply with the lockdown. Many fear that they will die of hunger instead of the coronavirus.

We were in serious economic trouble before Covid-19. Now, households are running out of food. Children who were fed at school are now at home and need to eat. If the only household income is the already inadequate Child Support Grant, it has to suddenly stretch a great deal further than a month ago.

However, the current economic meltdown is simply an accelerated version of what we have observed over the last 20 years: the steady decrease of formal sector jobs, as a consequence of macroeconomic challenges in the world economy, and the corruption and mismanagement of our economy. Many South Africans are structurally unemployed. Most will never work in the formal economy, no matter what promises are made at election time. It is time to acknowledge this, and to roll out basic income support for all poor and unemployed, or insecurely employed, people not yet registered in the grant system.

Government (including Social Development and Sassa) does not have a coherent social security or social protection strategy for dealing with Covid-19. Government’s humanitarian response to the pandemic is Social Relief of Distress, with food parcels as the primary relief. This is pitifully inadequate considering the sheer numbers of increasingly desperate people whose livelihood strategies have suddenly failed.

The Disaster Relief Fund, announced by Social Development Minister Lindiwe Zulu in a statement on 17 March, is only R96-million. President Ramaphosa in his speech on 9 April announced that R400-million was available for Social Relief of Distress, with a further unspecified amount from the R2.1-billion in the Solidarity Fund.

A “humanitarian” response is an important first line of defence in a disaster. It is crucial that humanitarian efforts are augmented with systemic structural economic interventions. Without national, provincial and local government coordination, temporary humanitarian efforts in the context of increasingly desperate and unmanageable queues of people at randomly chosen locations, will bring little relief.

Our government has ratified the United Nations International Covenant on Economic, Social and Cultural Rights (ICESCR). As recommended by the UN Committee, the government must ensure that those between the ages of 18 and 59 years with little or no income or who are unemployed, have access to social assistance. Government must report back on its progress in this regard by October 2020. If Brazil and Namibia, to name but two examples, can step up to the plate and support vulnerable families, surely we can respond to this challenge with the speed and innovation required in this crisis?

The Covid-19 crisis will not be over at the end of April, as the government is well aware. Even if we move quickly it will take between six weeks and two months to roll out a smart system that, paying each person with no or little income R1,000 per month, may prevent the worst excesses of hunger, privation, civil unrest and intra community crime and violence that will otherwise certainly ensue.

As we rollout basic income support, let’s learn from other countries’ experiences and put in place a mechanism for delivering the grant that does not reduce the cash value of the grant, as conventional bank accounts do, or worse still, allow banks to seize the grant to pay off debt incurred, as is currently happening in the US.

Time is not on our side when many people are facing the immediate prospect of starvation. Every single day counts. South Africa needs basic income support now. DM

Lynette Maart is the national director at the Black Sash.