The people should take power as Eskom staggers on 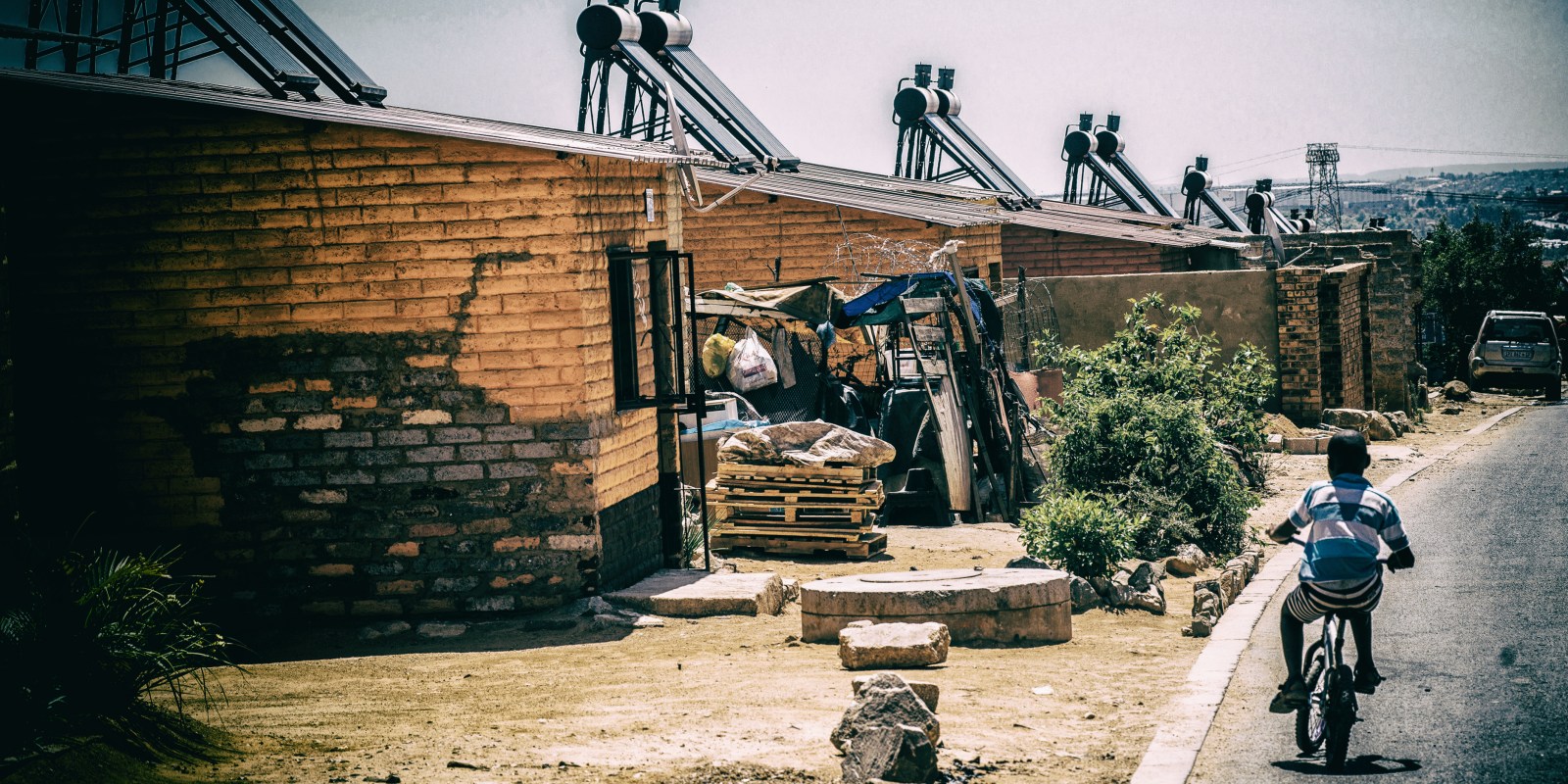 Can we create a solution to the Eskom problem by building a system of electricity generation that does not only generate power, but addresses key social ills in doing so? Can we address the issue of non-payment for electricity as we develop a ‘smart solution’ that also addresses the dearth of income and entrepreneurship in the townships? Can this help regain our competitiveness, stop corruption and move us away from coal-fired power? It’s time to look for answers.

A social movement has arisen in Soweto that refuses to pay for electricity. This situation surely arose out of the “free basic electricity” policy that is too simple to be sustainable. The policy has created a blind spot in Eskom’s operations that prohibits a dynamic institutional response to revenue generation as demand and revenue are disconnected.

This is typical of how we deal with problems in South Africa. We deliberately bury our heads in the sand, comforted by our emotions: We tried to protect the poor while we let the system slip… Now no-one is protected and we have no clear idea how to save Eskom, supply electricity and also relieve poverty and stop the debilitating air pollution.

Eskom is in debt (which should be written off), it uses out of date technology that may in the future affect our exports (and currently our health), there is widespread public dissatisfaction with the standards of service and it is a site of State Capture and corruption. Can we turn this mess around as we address the deeper problem of non-payment, legacy institutions and technology, and corruption, which is affecting almost everything in South Africa?

There is a real need for smart decisions here. One can nevertheless sympathise with those who don’t pay for expensive and often interrupted Eskom power. South Africa as a country and “corporation” certainly does not give back returns to the poorest from our meagre growth. Can we find a smart solution right here?

Technology currently allows decentralised power generation. Chris Haw argues we should develop a self-regulating generating sector at grassroots that will allow people to generate their own power. Relaxing current regulations would do this. This article goes in a slightly different direction. Would such localised and decentralised power generation not hold the seeds of an opportunity for the transformation of Eskom? This can herald a new approach to economic production and here a smart solution is possible.

Chris Haw argues that each and every person should be able to generate their locally regulated power unfettered by a commanding state. However, technologies, both hard in the form of solar panels, biogas and wind generators, and soft in the form of equitable ownership schemes, are being developed that allow local communities to generate their own power, own the production value of it, and in this sense build their own communities.

South Africa has many households which are poor and cannot afford to pay high Eskom tariffs. However, in this same house you might find one or two cell phone contracts, DStv, and possibly a fridge or computer and a car outside. Our people are poor, but they have the ability to accumulate assets. Many of these, like a cell phone contract, are financed not through cash, but through subscription services. People seem unwilling to pay for high Eskom tariffs, but they might find a flat-rate solution more palatable. Blending a flat-rate electricity subscription with the best in self-generating technology (solar power, biogas and wind among others) hints at a solution.

A flat-rate solution will moreover move consumers from a sphere of protesting to a regulated and disciplined flat-payment sphere. This creates new opportunities to structure this transformation of Eskom and now we can start to develop the smart solution we need

Why don’t we link a flat-rate electricity supply with an RDP house-based solar generation system? Let’s develop an RDP house-based solar roof system that can be mass-manufactured and installed on every single RDP house in the country. Imagine every poor township and rural area receiving a solar panelled roof with every RDP house, financed in part by their own subscription.

Tesla’s Solar City has designed such systems. Imagine giving this to every struggling RDP beneficiary, based on a flat fee, and integrated into a greater corporation that is directly owned by the people themselves.

Allowing each “owner” some sovereignty over this solar roof raises the prospect of a revenue stream which can release finance. This will also stimulate local self-reliant economies. Imagine we give each RDP homeowner a solar panel that is sufficient for themselves, backyard dwellers, and for the grid. We can anticipate the backyard shack electricity needs and design the system so the owner can sell not only to the backyard shacks but also back to the grid. Now the flat-fee “owner” becomes a power entrepreneur. Non-payment, electricity access, and entrepreneurship are being addressed simultaneously.

Communities could build on Chris Haw’s solution and develop cooperative or other ownership structures for collectives of solar panels. These systems allow for owners of panels to link or delink at will and the best systems are self-regulating. Central government and business could help with financing this capital expenditure. The benefits would be substantial: Security of power supply and economic development. People will quickly realise the economic power of economies of scale and this will create a more equitable market economy.

Such an RDP house-based virtual power plant could include an app or device in the home to show the person, in real-time, how much money the system generates. What would the effect be if each and every RDP homeowner sees this every morning? What would this do for civic attitudes? How would this boost entrepreneurship?

Imagine building into the system a computer with internet, WiFi and battery storage. Imagine an RDP house with USB-C plugs in every room. The computer power can bring the family online, battery power will increase revenue, allow (and subsidise) a spaza shop, and stabilise the grid itself. WiFi will make connectivity, and in turn everything else, possible.

Elon Musk’s system in South Australia has done some of this by creating a virtual power plant in a low-income community. It is a great historical tragedy that South Africa is not developing another with one of the sons of its soil. The people will have a direct stake in the solvency and profitability of this corporation and a direct stake in its revenue.

Sustainable communities, particularly if linked to local food systems, will emerge. We will create capital by the operation of technology in a free market system. South Africa would demonstrate political and financial responsibility in developing such a system, and this might be our only option left.

This kind of decentralised system will incorporate industries and businesses, which have an abundance of open rooftops. A smart solution will let higher power users and richer owners subsidise low-end consumers to directly create equity in the revenue and profits of this new Eskom. This will increase the creditworthiness of our people, generate power and link the fortunes of the poor directly with the growth of the country. As power is responsibly generated and sold, the country will develop, and the poor who “own” the power in the solar panels, will benefit directly as they are the primary shareholders.

A capitalist solution will never materialise as the capital cost of a solar system is too high for ordinary RDP dwellers, not to speak of its meagre socio-economic effects. Managing an economy by technological design has the advantage of creating affordances as features of the technology that creates social benefit.

This solution is also to some extent resistant to corruption. The technological systems of apartheid were classical, modernist, centralised systems which encouraged corruption, and this is why the ANC has thrived after apartheid.

In a decentralised system with owner-operator autonomy, people will be free to sell electricity (even to illegal shacks next door) and this behaviour builds the system. Selling legally could be easily made extremely attractive (by designing an affordance to benefit from it) in a decentralised socio-technological system and this will structure society in its wake.

Real work would need to be done when it comes to the details of the community-ownership structure. I am afraid without such smart solutions we will never regain any position of competitiveness in the world economy. We need to do more than simply generate electricity cheaply. We need multiple benefits to converge as we build a robust technological system. This is the mark of sustainability. We live in a time where the competitiveness of our economy has become the only means through which we will gain any kind of equity or ecological preservation.

We have the opportunity for a smart solution and we should grab it. DM

Naudé Malan is a senior lecturer in development studies at the University of Johannesburg.