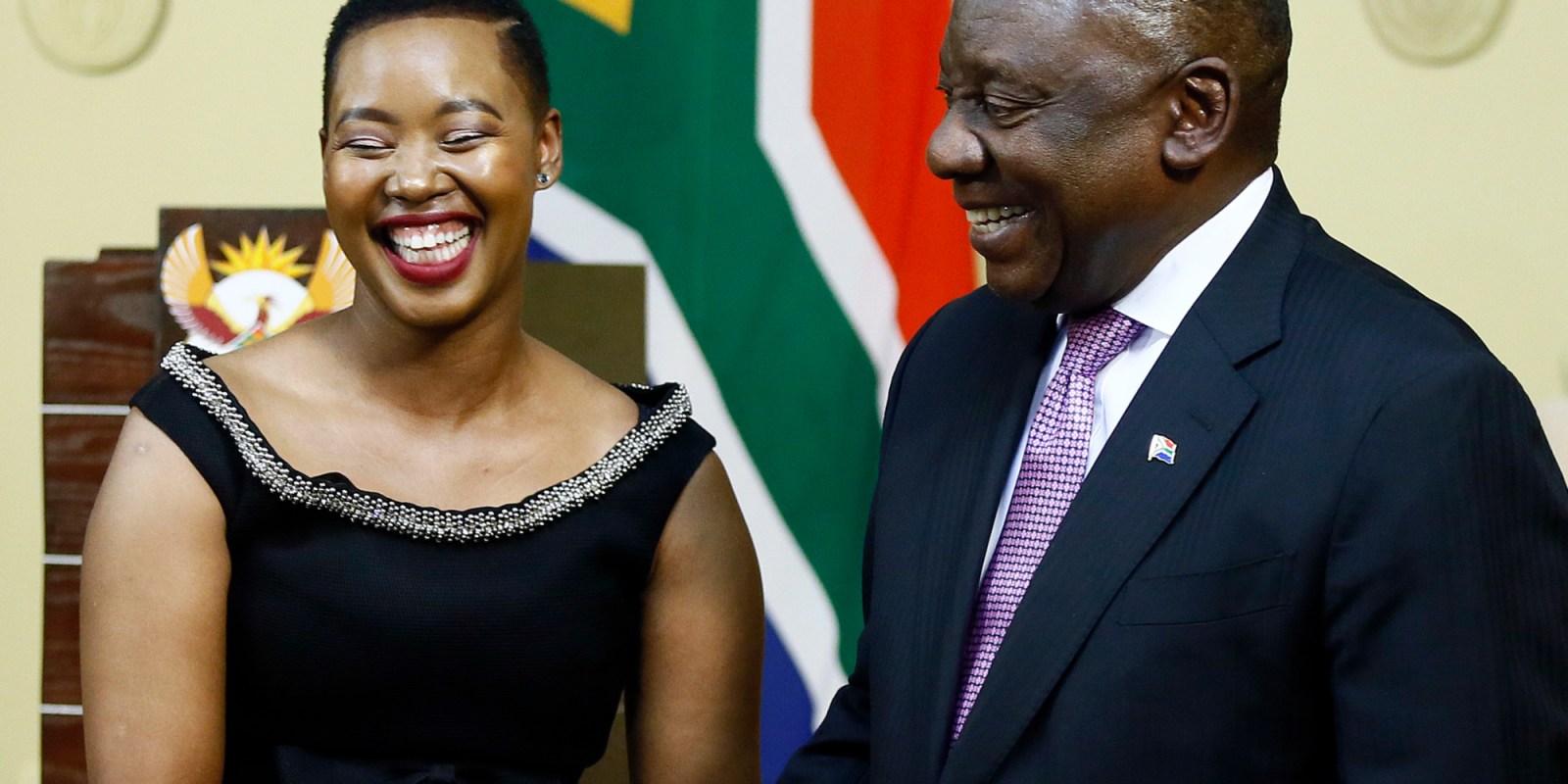 PRETORIA, SOUTH AFRICA – NOVEMBER 22: South African President Cyril Ramaphosa poses with newly appointed Minister of Communications Stella Ndabeni-Abrahams after announcing changes to the National Executive during a press briefing at the Union Buildings on November 22, 2018 in Pretoria, South Africa. The changes have been as a result of the passing of Environmental Affairs Minister Edna Molewa and the resignation of Home Affairs Minister Malusi Gigaba. (Photo by Gallo Images / Phill Magakoe)

The public censure of Communications Minister Stella Ndabeni-Abrahams for violating the lockdown has set a bar against impunity for Cabinet ministers.

In the three days since Stella Ndabeni-Abrahams’ illegal lockdown lunch with ANC flaneur Mduduzi Manana, the minister was asked to account for her actions and was then censured publicly by President Cyril Ramaphosa who said he was unmoved by her explanation.

In a video, she apologised to South Africa, accepted her forced leave (two months, one of which will be unpaid) and then reinforced the need for physical distancing. A presidential reprimand and sanction against errant Cabinet ministers is unprecedented in South Africa and it offers the public a benchmark that dare not be relaxed in the future.

When has this happened before?

Because of the history of the ANC as a liberation movement, bonds of struggle loyalty have been valued more than servant leadership to the South African public.

Cabinet ministers engaged in or complicit in significant corruption going back to the arms deal and right through the era of state capture have not faced censure nor have they ever apologised. The former Finance minister Nhlanhla Nene apologised for lying about how often he had met the Gupta family while in office, but beyond that, Cabinet impunity has been the political culture of the ANC.

In the final Cabinet of former President Jacob Zuma, ministers like Lynn Brown (Public Enterprises) Malusi Gigaba (Finance), Bongani Bongo (Intelligence) and Mosebenzi Zwane (Mineral Resources) were all caught red-handed in state capture endeavours but stayed in their jobs.  They were only removed in a reshuffle after the 2019 national elections.

In fact, since the first democratic Cabinet of President Nelson Mandela, Cabinet impunity has characterised the ANC in government. Serious failures in governance were often ignored in foreign policy, education, health and key areas to protect party unity.

Former President Thabo Mbeki, who valued the managerialist state, kept serial under-performers in his Cabinet too. This is because the country’s political system is party-based, not public-based, and factions can threaten heads of state with removal if their members face political censure.

Ndabeni-Abrahams was appointed into Ramaphosa’s Cabinet as part of his commitment to getting young people into government. At 42 years old, she is seen as close to Ramaphosa and campaigned vigorously and publicly for him on social media when he ran for the position of ANC president. She was gifted the powerful position of Communications Minister with the instruction to ensure spectrum was allocated to bring down the cost of data and improve its speed.  That has not happened, although Ndabeni-Abrahams has said she is constrained by cumbersome regulatory approvals. During her short time in office, she has made news for all the wrong reasons, with allegations that she is high-handed and imperious and that she makes space for her husband’s business interests.

Ndabeni-Abrahams has a purview over the SABC, the Independent Communications Authority of SA, the Universal Services Agency of SA and her style rubs people up the wrong way at all those institutions.

What forced Ramaphosa’s hand? The lockdown is a politically sensitive instrument that depends on public goodwill more than any other asset or collateral (the police are being awful but there are too few of them to enforce national buy-in).

Before the lockdown and during what can be called lockdown-lite, the Social Development Minister Instagrammed a picture belittling movement restrictions and was made to apologise for her actions. It’s likely that she faced less serious censure than Ndabeni-Abrahams because the hard lockdown had not yet been imposed.

But Ndabeni-Abraham’s insouciant lunch was like a match to a fire of public indignation – politicians cannot preach one thing and practice another.

If Ramaphosa wants to extend the lockdown to flatten the Covid-19 curve, it would have been impossible to do so without censuring his communications minister. Many feel he did not go far enough, but in ANC government’s history, it’s unprecedented and offers a point of public power against historic Cabinet impunity. DM