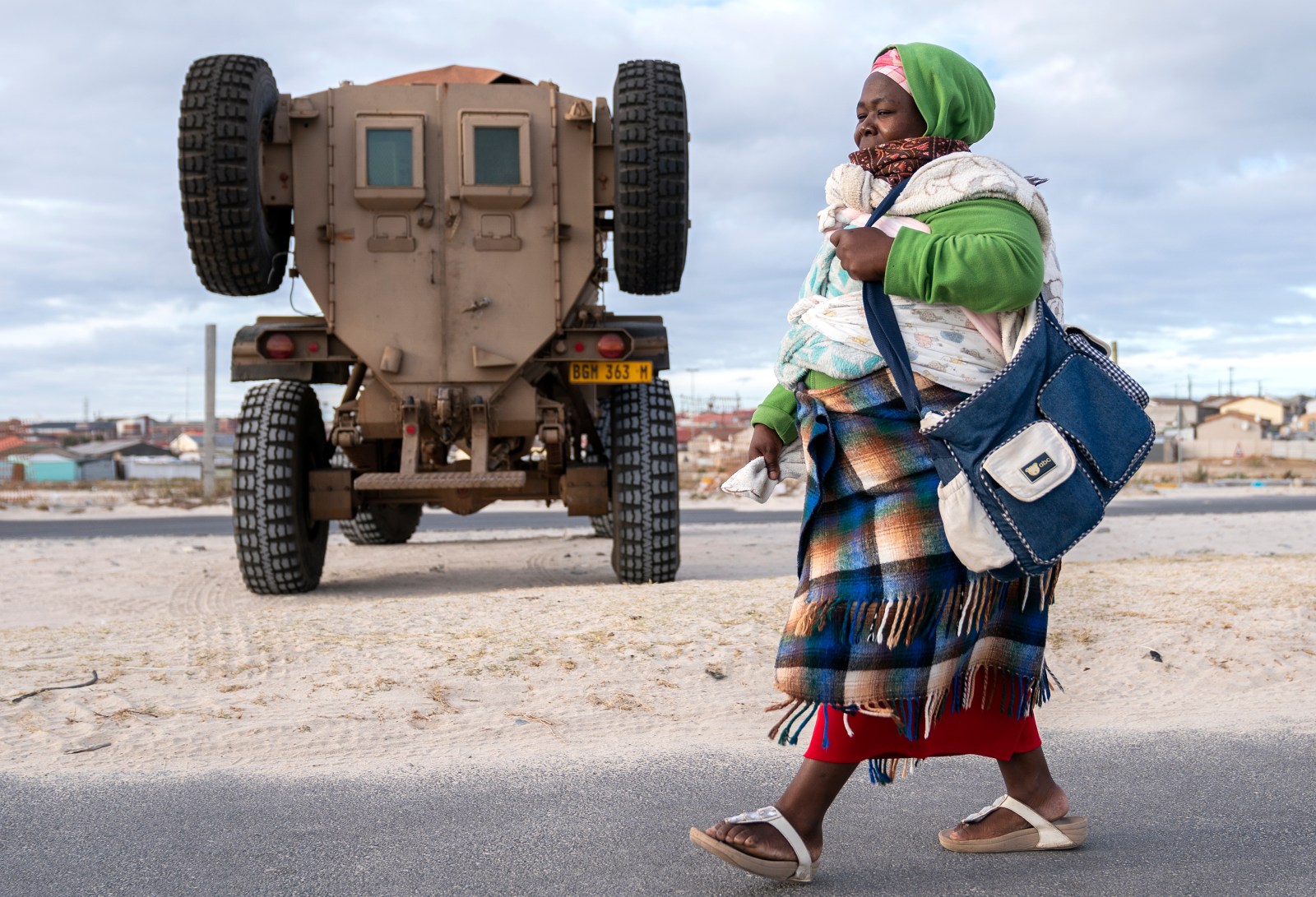 A woman walks past a military armoured personnel carrier in Khayelitsha, Cape Town on the fifth day of the 21-day national lockdown on 31 March. (Photo: EPA-EFE / Nic Bothma)

South African researchers are preparing to enrol patients from 14 hospitals across the country in a global clinical trial set up by the World Health Organisation. The trials, to start in two weeks’ time, will compare the safety and effectiveness of four different drugs or drug combinations against Covid-19.

Professors Helen Rees and Jeremy Nel from Wits University will be co-ordinating a team of academics, clinicians, infectious disease experts, virologists and intensive care specialists to run the trial.

Adele Baleta spoke to Rees to get a detailed insight as to how the trial will work and which drugs will be tested.

While some of South Africa’s best minds work on this trial to treat Covid-19, the world-renowned HIV scientist Professor Gita Ramjee has died of Covid-19 complications. Tributes have poured in from colleagues around the world, such as those from the World Health Organisation and UNAIDS. Anso Thom has written about Ramjee’s hugely impactful work to find solutions to prevent HIV in women in South Africa.

There is reason to be cautiously optimistic that the lockdown is helping to stop the spread of Covid-19, according to Health Minister Zweli Mkhize. The country has considerably fewer infections than the ministry’s models had anticipated, apparently.

Mkhize said the laboratories are under enormous pressure and that backlogs are being attended to. He assured that more personal protective equipment and hospital beds are being made available.

He said that he is concerned about the rate of local infections, although 70% of the cases are related to travel. Recent incidents with South African cruise ship passengers have compounded the issue, as thousands of fellow passengers need to be traced.

Testing and screening are going to be targeted at hot spots, Mkhize said. Mobile testing vans are being sent to Gauteng, Western Cape, KwaZulu-Natal and the Free State, and tracing teams will be doubled in size by bringing in NGOs, health workers and nurses. As Estelle Ellis writes, Mkhize has expressed his concern about the approaching winter months.

Meanwhile, the Department of Employment and Labour and the Unemployment Insurance Fund have announced that about R30-billion has been provisionally set aside for the new Covid-19 temporary employee relief scheme. The scheme will provide income support to workers who have been temporarily or permanently laid off. Ray Mahlaka explains what might be in store for the fund this year.

The Solidarity Fund, on the other hand, continues to bring in massive donations. More Oppenheimer family members have donated a sum total of R1-billion to the fund. But, as Sasha Planting explains, this fund is not the only way people are making massive contributions to respond to the outbreak.

Transport Minister Fikile Mbalula has had to ease some travel restrictions, one being the ban on international travel. The partial easing is to allow South Africans stranded abroad to fly home and for foreign embassies to evacuate their citizens from South Africa. There are 1,472 South Africans stuck abroad, according to International Relations and Cooperation Minister Naledi Pandor. How exactly they will all get home remains a bit of a mystery, writes Greg Mills.

People in South Africa have also been left abandoned. Evictions have continued to take place, despite an order from Justice Minister Ronald Lamola that all evictions stop until midnight 16 April. Civil society organisation Abahlali baseMjondolo has recorded how private security has twice in the last week evicted and injured people living in the Ekuphumeleleni settlement. Zukiswa Pikoli spoke to them about the action they are taking to bring this to the attention of the Presidency.

The private security sector is three times the size of SAPS, even under lockdown conditions. Diana Neille has taken a look into how private security companies are operating during the lockdown and who is keeping an eye on them.

Meanwhile, fake news is running amok. Rebecca Davis has taken the most common themes in messages ripping through South Africa’s WhatsApp groups right now and debunked them for you.

Fake news can kill. The Poison Information Helpline of the Western Cape has seen an increase in calls about what to do if children ingest hand sanitiser, but one call highlights how dangerous unverified information can be.

An eight-year-old child was hospitalised for severe vomiting after he was given a mixture of lemon juice, baking soda and boiling water for protection against Covid-19. His parent had received this prevention “advice” from a viral WhatsApp message.

He had inadvertently been poisoned. Misinformation and fake news can kill. DM