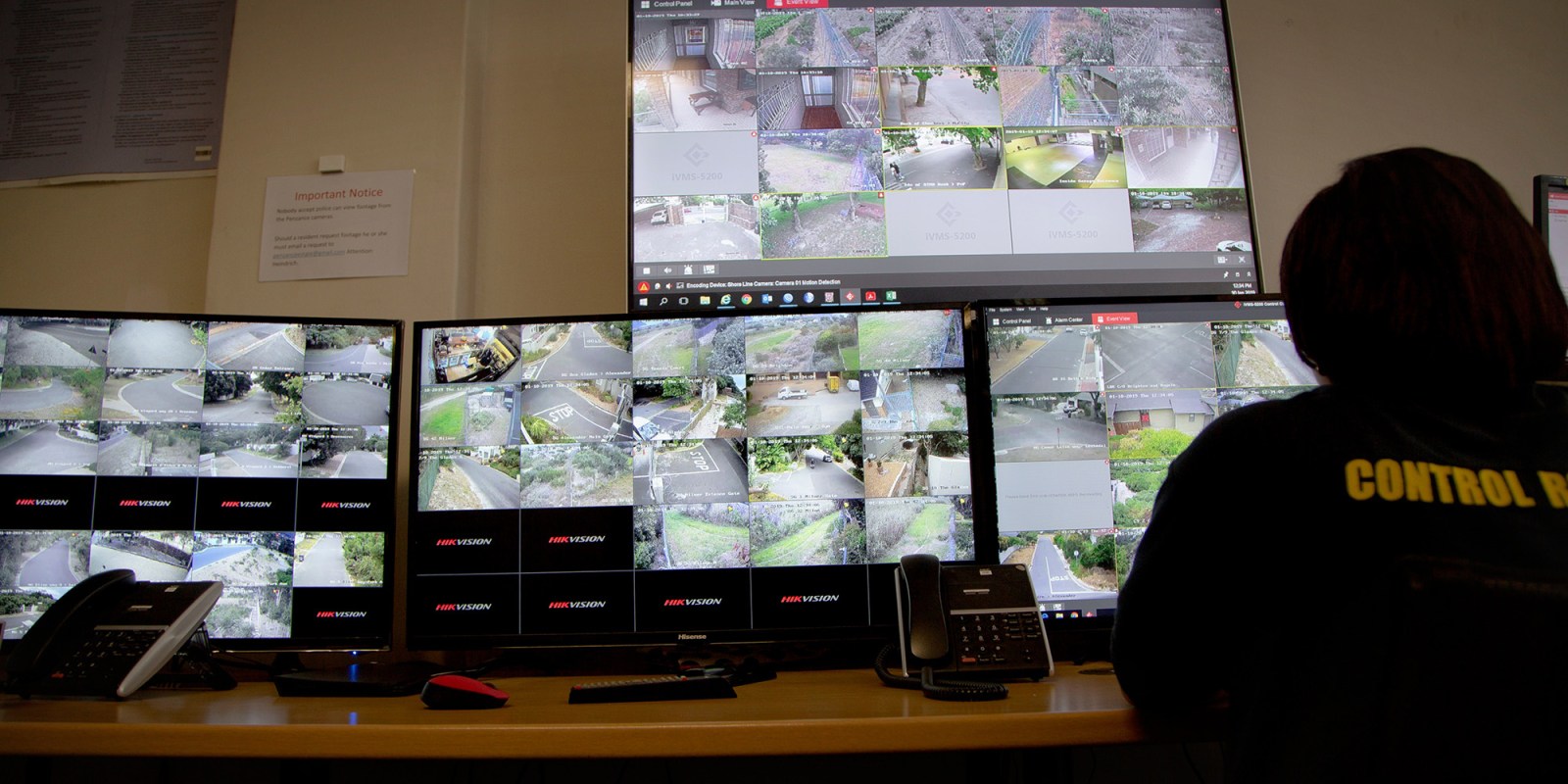 A day before the lockdown was enforced on March 26, the private security industry received a last-minute go-ahead to continue operating as an essential service. At three times the size of the SAPS, the sector is a major driver of employment. But, during a time of reduced movement and economic activity, why is private security so essential, and who is guarding the guards?

On March 27, only a few hours into the nationwide lockdown, candidate attorney Elisha Kunene, 26, and his brother David, watched from behind the security gate at their Melville home as a group of police threatened to burn the belongings of a homeless man. According to Kunene, the policemen were flanked by several private security guards in white, black and red uniforms, at least one of whom had his face covered by a balaclava.

When the heavily armed group noticed the brothers, Kunene said at least five men forced their way into his two-bedroom house, patted him down and searched the premises, pouring out alcohol and screaming abuse for over 10 minutes.

“I knew every aspect of what they were doing was unlawful,” said Kunene, “but I didn’t want to antagonise them further by saying so.” Instead, he tried to leave the room, but was blocked by one of the private security guards, who put his hand on his weapon and threatened that he didn’t have to abide by the same rules as the police.

Only a few days into lockdown, reports of abuse at the hands of the police and army attempting to enforce shelter-in-place measures have already proliferated across social media. On Monday, the Minister of Defence and Military Veterans, Nosiviwe Mapisa-Nqakula, condemned the excessive use of force and called on the chief of the SA National Defence Force (SANDF) to monitor activities on the ground. But members and representatives of the private security sector have denied any involvement or culpability, saying they have not been given a mandate to serve as “peace officers”, or to assist in law enforcement activities.

In 2002 the Private Security Industry Regulatory Authority (PSiRA) was established to oversee a burgeoning sector, as crime rates threatened to overwhelm state law enforcement. By 2012, South Africa had one of the largest private security forces in the world, with 400,000 active guards registered.

In 2019, that number had grown to almost 534,000 active guards working at 5,077 companies across the country, according to PSiRA’s annual report. Essentially, businesses and South Africans with means had privatised policing, booming off neighbourhoods and business parks and spending about R45-billion a year on these protective services.

“South Africa has an intricately networked system of policing, in which a lot of  ‘policing’ is not carried out by the state,” Andrew Faull, a senior researcher at the Institute for Security Studies, told Daily Maverick.

“Importantly, private security can also help prevent break-ins at government, business and industrial premises that will be closed during the lockdown.”

None of these activities precludes the potential for abuse of power.

Beagle Watch Security, which acquired CSS Tactical in 2017, is one of the private security companies active in the Melville area and its uniforms match Kunene’s description. General manager Andre Aiton said the company is often pressured by customers to police the movement of people into and out of the areas it guards, but that he was not aware of any incidents of abuse involving the company’s security personnel.

“It’s a general protocol that we will assist the police whenever possible,” Aiton told Daily Maverick. “But we haven’t engaged with the SAPS over the last seven days [because of the new lockdown mandate]. Regardless, it wouldn’t have been permissible for us to enter the premises of a resident who is not a customer.”

“President Cyril Ramaphosa enlisted the army as well as the police to assist in implementing the lockdown, but private security has no specific enlistment. They will only become part of the police when specifically invited to do so.”

For the time being, private security companies say they are simply expected to continue guarding their individual and business clients, and as such may be expected to help manage human traffic at apartment complexes, roadblocks and other essential service providers such as grocery stores and cash in transit operations. They are also expected to continue in their role as the eyes and ears of law enforcement, surveilling more of the country than the SAPS is able to, and informing them of any threats or incidents that may pose risks to citizens.

“The continued operation of private security allows government to focus on the critical task of maintaining law and order during the lockdown,” one of the country’s largest private security providers, the massive multinational G4S, said in an emailed statement.

“We continue to provide services to our customers, notably, to protect their premises and to ensure that, through our cash management services, we are able to secure the circulation of cash in our economy.”

The National Command Council dealing with Covid-19, headed up by President Cyril Ramaphosa, last week deployed 3,000 SANDF troops across the country to assist SAPS in enforcing the lockdown. The private security sector is larger than both the police and the army combined, and could potentially be deployed by the minister of justice to bolster law enforcement as a reserve force should the need arise, Chauke said.

It’s not as if that wouldn’t be easily co-ordinated. Over the past decade, security companies have taken on an increasingly militant role, serving as first responders at major and minor crime scenes, donning military-style fatigues, driving armoured vehicles and carrying automatic weapons.

“Private security is a commodity, but increasingly we are seeing the sector fulfilling many of the roles that used to be the domain of the police and army, and there’s been professional creep into the private sector as the state’s capacity has weakened,” said Stellenbosch Professor Lindy Heinecken, a specialist conducting research for the South African army.

“There’s also been a massive skills drain – from public to private – of the most talented and effective officers and investigators,” she said. “Private security companies are run by former police and military officers who know the protocols and the structures.”

While Heinecken says there are “extensive protocols in place” in terms of private security working together with law enforcement, she admits to being worried about inevitable abuses of power during a National State of Disaster that is subject to less scrutiny and citizen monitoring than usual.

“If I look at the current stressors on my own household, which is well resourced, how must this [lockdown] be for someone living in an RDP house?”

As the chief operating officer of a successful community anti-crime initiative active throughout Johannesburg’s affluent northern suburbs, CAP Security’s Sean Jammy says the organisation’s focus is predominantly on preparing for the aftermath of the lockdown.

“Over this period we believe crime will be lower due to the massive number of security out and the drastic impact the restriction on freedom of movement will have,” said Jammy.

“However, all bets are off post-lockdown. With the impact of it eventually being lifted, security systems withdrawing and the criminal community needing to make up for lost time, we’re concerned.”

Heinecken’s worries aren’t about the suburbs, however.

“Private security will take care of the elite areas, but my concern is mass rioting and looting in the townships as people’s living conditions become more dire,” she said. In those scenarios, private security could well be enlisted as reserve forces to help quell dissent.

Regulatory bodies like PSiRA know from experience the risks involved in a potential escalation within the sector.

“We have over the last few years experienced a number of unfortunate incidents where members of the industry overstepped their mandate to serve the interest of their private clients, under the guise of legitimate self-protection,” the organisation said in its 2018/2019 annual report.

“There is no doubt that the private security industry is playing a significant role in the fight against crime through proactive measures… but it must be mindful that the lines of state law enforcement versus private protection should never become blurred to an extent where the private security industry unlawfully infringes on the rights of ordinary members of the public.”

Despite these warnings, Chauke says the industry has not put any precautionary protocols in place because it isn’t anticipating a call-up to join the SAPS and SANDF in managing the front lines of the Covid-19 crisis. That call would very likely indicate a significant turn for the worse, in a situation that grows more tense by the day. DM