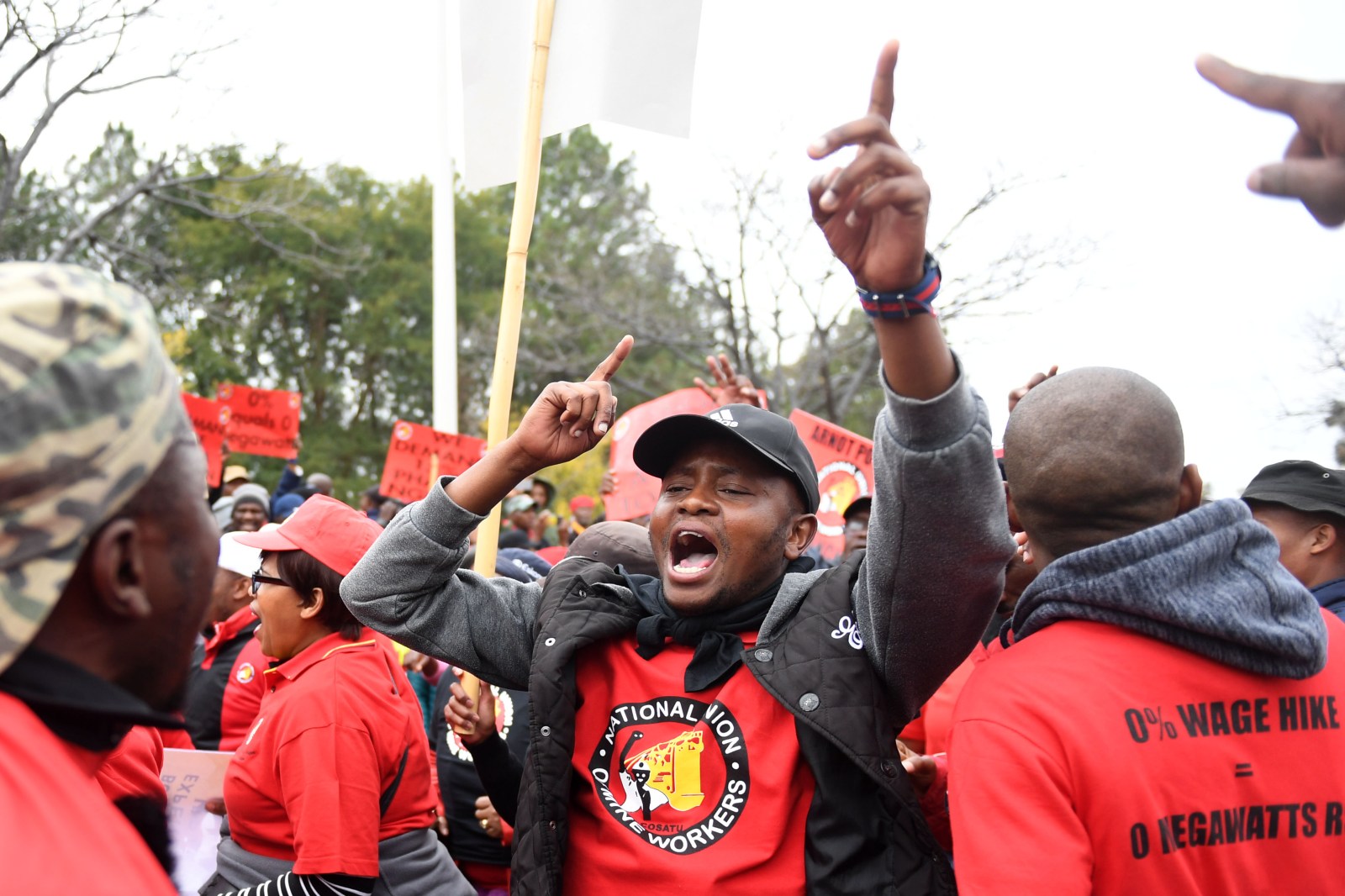 The NUM union is angry that some mines will operate during the 21-day lockdown. Meanwhile, some mining companies are paying basic salaries during this period and others are not. Flashpoints for conflict between capital and labour are emerging, as are tensions between the ANC-led government and its political base. And Saftu is also seeing red.

The National Union of Mineworkers (NUM) has come out swinging.

In a strongly-worded statement on Tuesday, 31 March, the union reiterated what it told Business Maverick late last week, quoting its president Joseph Montisetse as saying:

In response, the Department of Mineral Resources and Energy (DMRE) said the department met key stakeholders in the mining and energy industries on 24 March, to consolidate plans to deal with the spread of Covid-19 and to support the presidential action to institute a nationwide 21-day lockdown.

“While demand is expected to decline in the period ahead, as a result of restrictions on economic activity, security of energy supply remains critical. The department further also understands that some operations, like smelters for example, take about six months to shut down and it would take them longer, and be costly to start them up again.

“Operations that supply essential services are permitted to operate but have a responsibility to adhere to the lockdown regulations, and it would be disappointing if there are some who are wilfully defying that. The department has not been given the impression that that is the case.”

“In all our undertakings, people’s lives are a key priority, and we must ensure their health and safety, while also ensuring that the limited economic activity which will be undertaken during this period is supported. Engagements are ongoing between the sectors, the relevant government departments and state-owned entities. The department will continue to provide updates as the situation unfolds.”

The DMRE is of course headed by Gwede Mantashe, a former mineworker who once headed NUM, a union co-founded by President Cyril Ramaphosa. NUM’s membership has been in sharp decline in recent years in the face of rival union Amcu’s rise, mounting lay-offs, and a pivot to mechanisation where geology allows.

Yet it remains a key base of political support for the governing ANC, and government at this time needs broad buy-in for the measures it is taking to contain the pandemic while enabling “limited economic activity”.

So NUM’s position is loaded with potential political consequences, even if Ramaphosa at the moment appears politically stronger than ever as he attempts to lead the nation through the crisis.

The reasons behind government’s decision to allow some mining are varied. Coal producers that supply Eskom have been allowed to operate in the interests of energy security in the longer run beyond the lockdown, during which no load shedding is expected because of the plunge in power demand.

The Sishen mine of Anglo American’s Kumba Iron Ore unit is operating at 50% of its workforce and reduced capacity. In a statement, the company says:

“Kumba has been granted approval by government to continue operations on a scaled down basis. This follows the announcement by President Ramaphosa of the… lockdown and the Minister of Minerals and Energy’s pronouncement that companies producing for export markets would be considered for exemption on a case-by-case basis.”

Applications for exemptions by companies servicing “critical export markets” were reviewed on a case-by-case basis. It is not clear if this process is still ongoing.

“By continuing operations, we will be able to sustain our market share of the global iron ore market, generate much-needed foreign exchange income and be in a stronger position overall to contribute towards South Africa’s economy, particularly as a result of the impact of Covid-19,” Kumba said.

So, part of government’s thinking here seems to be to keep at least some exports going to keep foreign exchange flowing into the economy, if only at a trickle of what it was before. There will be much debate about such issues in the coming days and weeks, and given the unprecedented nature of this unfolding crisis, changes may yet be made. But shoring up forex flows is one way to avert a potential balance of payments crisis down the road – the kind of crisis that typically triggers IMF bailout packages.

Kumba is screening all of its employees, and its open-cast and mechanised operations are very different from the labour-intensive operations that define most of South Africa’s deep-level mines. Anglo American Platinum’s open-pit Mogalakwena mine and the mechanised Mototolo mine will also be allowed to maintain production on a reduced basis.

Another reason that some mining operations are allowed to continue is because companies in the sector provide services that the government has failed to provide.

Kumba, which operates in the arid Northern Cape, says it “… supplies 18.2 million cubic metres of water per annum to the Sedibeng Water Board and the Gamagara Municipality from our mine dewatering activities. Since the lockdown period, the Sishen team in collaboration with the Gamagara and Tsantsabane local municipalities delivered drinking water to informal settlements. We also provide health services to the community through our Batho Pele mobile clinics, the UGM primary health centre, the Postmasburg hospital and primary health care centre.”

It is also providing security services for the wider community.

“In Kolomela, we established a Joint Operations Centre working with the local municipality, local government, local businesses, SAPS, CPF and SANDF during the Covid-19 lockdown to respond to community needs.”

Anglo and Impala Platinum – which closed all of its underground mining operations – are paying all staff during the lockdown, but not all companies can afford to do so. Business Maverick is compiling a list of companies that pay and those who are not. Those that are not paying can probably not afford to unless they can access credit facilities or emergency government relief measures.

NUM also said it was “extremely unhappy with some companies who have resorted to no work no pay during the 21 days of lockdown”.

The Minerals Council South Africa, the industry body that represents the mining industry, said in a statement that:

“The Minerals Council supports the call from Business South Africa that employers be encouraged to be as generous as they reasonably can be in the current circumstances in respect of payment to employees not at work. However, it is important to plan in a way that does not unduly destroy the ability of the business to survive, or to reopen, when public health circumstances make it possible to do so.

“In line with this, some Minerals Council’s members have taken a decision to pay the basic salaries of employees who are not working as a result of the lockdown. In the event that the lockdown is extended beyond the 21 days, some companies might find themselves in a situation where they are unable to continue paying employees’ salaries due to the financial impact of ceasing operations. In such an event, the affected companies will utilise the Covid-19 Temporary Employee/Employer Relief Scheme (TERS) as soon as the relevant regulations have been finalised.”

The South African Federation of Trade Unions (Saftu) – which is emphatically not a base of ANC support – is also seeing red.

“SAFTU condemns the employers who are obsessed with profits in the face of the biggest health and economic catastrophe ever to face humankind. The South African Federation of Trade Unions (SAFTU) condemns in particular in the private sector.

Amcu said it had written to Mantashe last week to express its “disappointment with the blanket allowances for the exemption of specifically coal mines from the Covid-19 national lockdown”.

The minister has yet to respond to its letter, the union said.

South African history has long been peppered by conflict between capital and labour. And while it is true that unions here often engage in strident rhetoric, the stakes are dramatically rising. Even while temperatures across the country cool as the austral autumn descends, things are heating up. BM