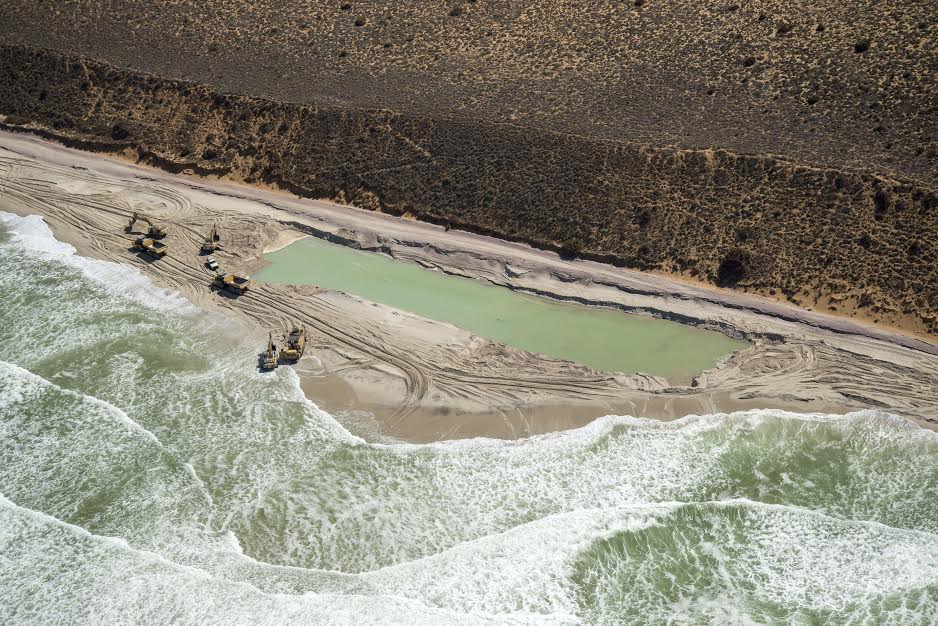 Beach mining at the Tormin mine on the West Coast north of the Olifants River. The government has dismissed appeals against a huge expansion of these operations. (Photo: John Yeld)

Environment minister rejects most of the appeals against Tormin expansion plans.

Environment Minister Barbara Creecy has dismissed most of the appeals against the approval in 2019 of vastly expanded beach mining operations on the West Coast north of the Olifants River.

In her 35-page decision released on 26 March), Creecy agreed with just two concerns raised in one of the four appeals against the government’s approval of this highly controversial proposed expansion by an Australian-owned mining company.

She has ordered two changes to the conditions of approval for the project – one of which is environmentally significant but neither of which will restrict the huge extent of the planned new mining.

In June 2019, the Department of Mineral Resources (DMR) issued an Integrated Environmental Authorisation (IEA) for Australian-owned company Mineral Sands Resources to expand its current 120-hectare Tormin beach mining operation near Lutzville where it extracts mineral sands like zircon, rutile, ilmenite and garnet. The expansion will encompass 10 additional beaches to the north of the existing mine and an inland strip of old beach adjoining the existing mine, involving a total of 125ha of extended mining. There is also a 64ha expanded area for plant and infrastructure at the Tormin mine.

The CER’s appeal was based partly on its challenge to the legality of section 102 of the Mineral and Petroleum Resources Development Act (MPRDA), which allows the state to simply expand existing exploration and/or mining rights without any further environmental, social and economic assessments being required.

In dismissing the CER’s appeal, Creecy said she agreed with the Department of Mineral Resources that the CER’s challenge related to mining legislation, whereas the environmental authorisation had been granted under the National Environmental Management Act (NEMA).

“For these reasons, I concur with the DMR this ground of appeal should have been brought in terms of the MPRDA, not … NEMA.”

The CER also argued that while the Constitution demanded “ecologically sustainable development”, in this case there had been fatal flaws in assessing likely impacts on terrestrial biodiversity.

But this was also dismissed by Creecy. She said she had perused the methodology used and taken note of the findings of the specialists’ reports relating to Critical Biodiversity Areas and Species of Conservation Concern. “… I am satisfied with the key mitigation/optimisation measures to mitigate the impacts on terrestrial ecology.”

The North Western Cape Mining Forum’s appeal was based on its argument that no meaningful effort had been made to promote ownership and management of mines by Historically Disadvantaged Persons in the Matzikama municipal area and on the West Coast since 1994. The group wanted “a full and thorough research and investigation” by the DMR into the status of current mining rights and rights holders, and the remaining mineral deposits.

Creecy dismissed this appeal on the grounds that it too was an issue that should have been raised through mining legislation and not through NEMA.

Creecy said she had noted the summaries of the expected positive and negative implications and risks of the expanded mining in the coastal zone and of the recommendations for mitigation measures.

One of the “essential” mitigation measures was for a 10m buffer zone, measured from the toe of the sand dune or cliff towards the sea where no mining, driving or other disturbance should be permitted. Experts in Creecy’s own department had recommended a 20m buffer zone.

Creecy ordered DMR to amend the relevant section of the IEA to read: “The buffer zone of 10m must be demarcated from the toe of the cliff and the actual mining area. The area must be demarcated as a no-go area for the duration of mining activities.”

She also upheld part of Raakvat Boerdery’s appeal relating to the mining company’s access to the expanded mining areas, as some access would be over private land.

Creecy ordered an additional amendment to the IEA, to be worded: “Mining right activities or operations must not encroach on road access to the beaches and the applicant (Tormin) must facilitate reasonable access to the public in a reasonable manner.”

The fourth appellant, Professor Sowman, is director of the Environmental Evaluation Unit in UCT’s Environmental and Geographical Sciences department.

In her appeal, Sowman argued that the cumulative impact of a number of applications to mine and prospect for heavy mineral resources on this section of the West Coast had not been assessed and considered. Each of these applications was being assessed on an individual basis without government having undertaken a strategic environmental assessment of the whole coastal area in question and of the cumulative impacts of the various applications – a legal requirement.

Pointing out that specialist studies had indicated number of impacts of “high significance” – particularly in relation to marine and terrestrial ecology – Sowman also argued that several of the proposed mitigation measures were vague and unrealistic.

She said she was satisfied that the cumulative impacts had been properly investigated and assessed by the DMR. Information presented to her showed that 10 specialists had compiled reports as part of the original assessment, all of which had identified impacts and proposed appropriate mitigation measures. DM