Investing in a time of Virus: Sit tight, this too shall pass 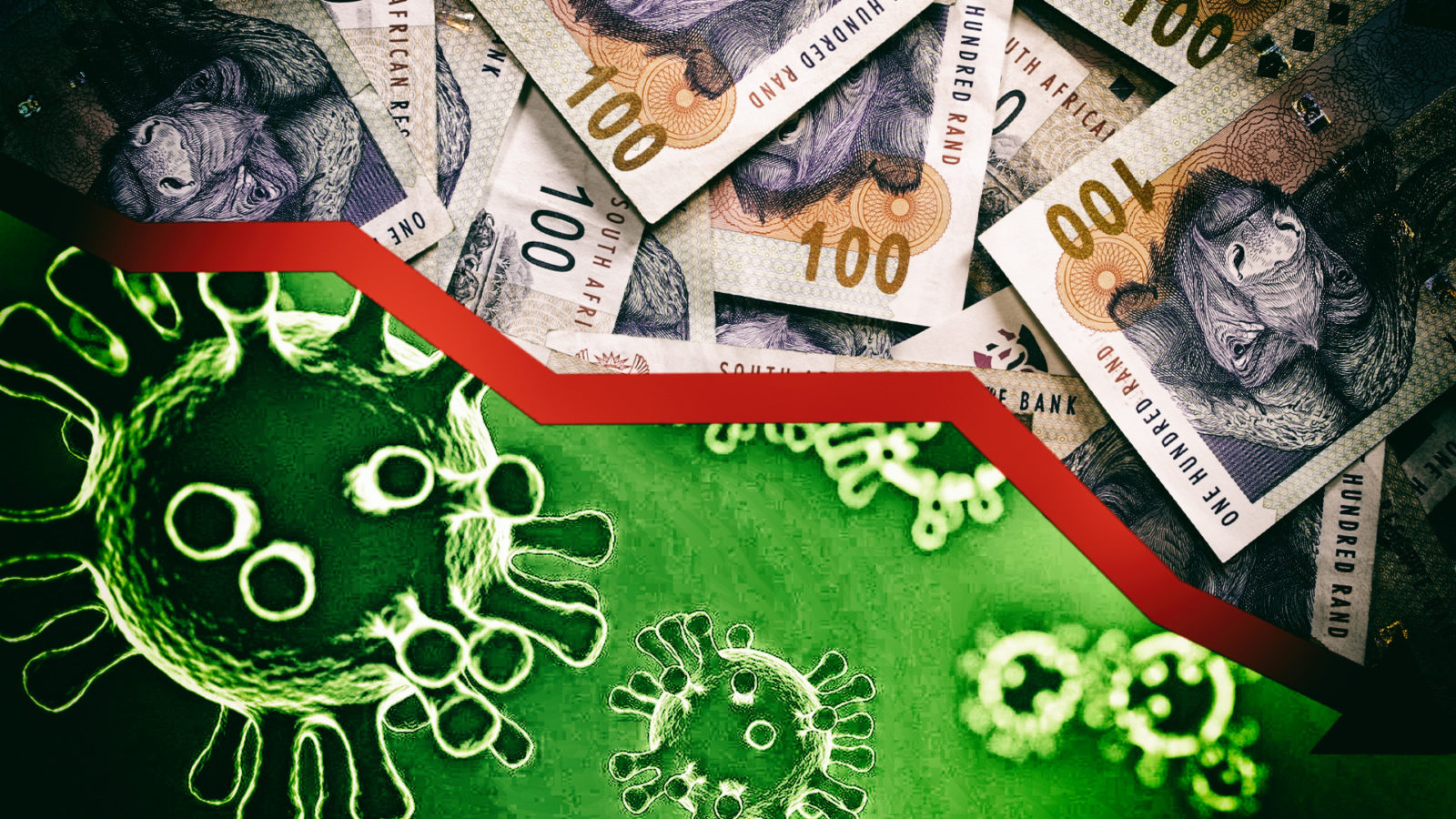 You would not be human if every fibre of your being wasn’t telling you to sell everything and get the hell out of Dodge City.

How many times have you been told to sit tight in the past week? How infuriating are those words?

When you have denied yourself tiny luxuries like regular cappuccinos,  your wardrobe is on average 15 years old and you have driven your 1986 Toyota Corolla as far as it will safely go, watching your hard-fought for nest egg collapse by over 20% in less than a month is gutting.

In these circumstances it is very difficult to remain calm and unemotional.

In fact, you wouldn’t be human if every fibre of your being wasn’t telling you to sell everything and get the hell out of Dodge City.

Taking steps to protect yourself and your assets is a normal human instinct. Except in the world of investing, to sell after a fall of this magnitude is simply to lock in the losses and is possibly the worst of all steps to take.

So what should one do?

First, sit back and take stock.

In some cases, price moves don’t make any sense, for example, gold, typically seen as a safe haven, has also fallen.

“The price declines have been fairly indiscriminate, with the market drawing little distinction between those businesses that should prove defensive and those that are more exposed,” they say.

One reason for this could be the growth in passive funds over the past few years, which many analysts believe has damaged the price-discovery process across markets.

What’s clear is that major equity indices are now in bear market territory, typically defined as a 20% peak to trough loss. A more useful way to classify a bear market is perhaps a deep decline in equity values that takes more than a year or two to recover and is associated with an economic recession, says Old Mutual investment strategist Izak Odendaal.

A HISTORY OF BEAR MARKETS 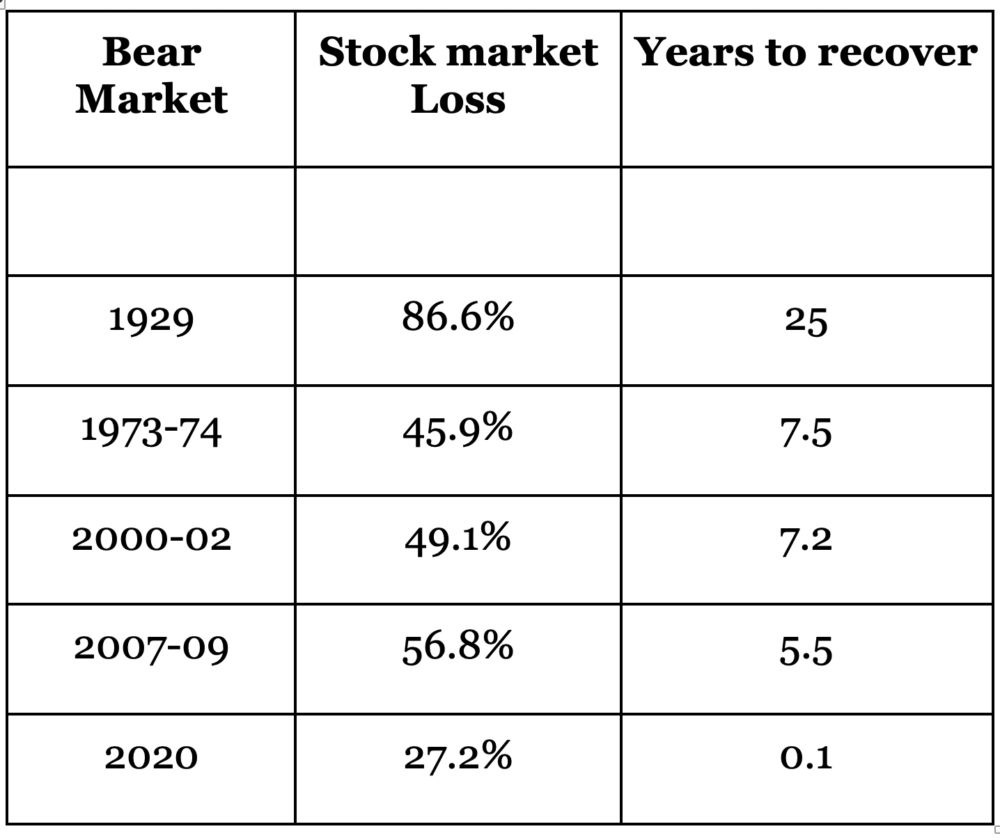 While most investors can sit out a short, sharp correction, a long-drawn-out decline can cause real financial damage as well as psychological stress.

Naturally, everyone is wondering how long the economic slowdown will last.

Obviously, the shorter it is the more chance that supply chains, companies and economies will dust themselves off and carry on. But if the shutdown lasts for months, then the effects become more long term.

What seems apparent is that the Covid-19 pandemic has yet to peak and the economic consequences will be painful.

Early analysis from S&P Global economists forecasts a global recession in 2020. In an article titled “COVID-19 Macroeconomic Update: The Global Recession Is Here And Now,” they say they estimate GDP growth in 2020 at just 1.0%-1.5%, with risks remaining firmly on the downside.

The lockdowns that we have seen around the world will hurt three of the four key drivers of the global economy, says Zwelakhe Mnguni, CIO Benguela Global.

The biggest impact is caused by the slowdown in private consumption because people can’t move around, and firms can’t manufacture at normal rates as workers are in lockdown to avoid human contact.

“Household consumption, at 58%, is the biggest component of global GDP, and any drop will have an impact on the global economy.”

Capital investments will be delayed because investors have no confidence in the future profitability of their projects, further slowing economic growth. And trade will slow down as a result of both the slump in demand and breakdowns and bottlenecks in global supply chains.

In this regard, how quickly China comes back on stream is a matter of global concern.

Government spending is a lever

The only lever left to pull is that of government spending, which accounts for 17% of global GDP, he says. In response to the risk posed by the Covid-19 crisis on the global economy, governments and central banks all over the world have enacted fiscal and monetary stimulus measures to counteract the disruption.

In the US, the Federal Reserve Bank cut rates twice — on 3 and 15 March by 0.5% and 1.0%, respectively. In addition, the Fed resumed quantitative easing by purchasing $500-billion in treasuries and $200-billion in mortgage-backed securities.

In Germany, the state-run bank, KfW, (not the central bank), was authorised to lend as much as $610-billion to companies affected by Covid-19.

In the UK, the Bank of England cut rates back to 325-year lows, while the Chancellor (similar to SA’s Finance minister) revealed a £30-billion fiscal package.

Japan has passed two packages of small business loans, one $4.6-billion package in February, and a $15-billion one on 11 March 2020. On the monetary side of things, the Bank of Japan announced a significant increase in quantitative easing on March 16 by doubling the rate at which it purchased ETFs from $56-billion a year to $112-billion, and increased purchases of corporate bonds and commercial paper.

Additionally, the bank announced a 0% interest loan programme for businesses affected by the virus.

For its part, other than asking banks to extend the terms of business and commercial loans, China has yet to implement a big fiscal stimulus.

“The point to note is that while countries like the US have the financial wherewithal to implement colossal stimulation packages as they can print money, many other governments don’t have such luxury without causing severe currency weaknesses,” says Mnguni.

Of course, these measures will take time to work through the system, and there are questions as to how effective they will be.

So, what should investors do?

“If you don’t need to sell, you still own the same number of shares and bonds in your portfolio as before. They are worth much less now, but they can recover. This is not the first bear market, and won’t be the last,” says Odendaal.

It is also worth remembering that the panicked selling would have pushed some investments well below their intrinsic value, creating opportunities for patient investors.

It is natural for investors to want to get out of the market now. However, when markets snap back, they do so quickly and without warning. By the time the panic subsides and conditions on the ground improve, it might be too late to get back in.

“All that is achieved then is selling low and buying high,” Odendaal says.

Has the market reached the bottom?

“I’ve been at Coronation for 20 years, and in all previous crises we have been early buyers of assets that we felt had sold off to levels meaningfully below our assessment of underlying intrinsic value,” says Leinberger. “This time is different.”

After discussions with epidemiologists and other disease experts, Coronation took steps in February to protect its various portfolios and did not immediately buy equities into the sell-off.

A few weeks down the line markets are starting to price in the economic consequences of the sell-off.

“Equity markets are becoming less indiscriminate – sectors that find themselves in the eye of the storm and stocks with weak balance sheets are being punished,” he says.

At the same time, it is becoming increasingly obvious that there are “a large number of risk assets out there are stunningly cheap, both in SA and global markets’.

For this reason, he says, Coronation is starting to shift its stance and may cautiously start buying equities again, always weighing the possible return against the risk. BM