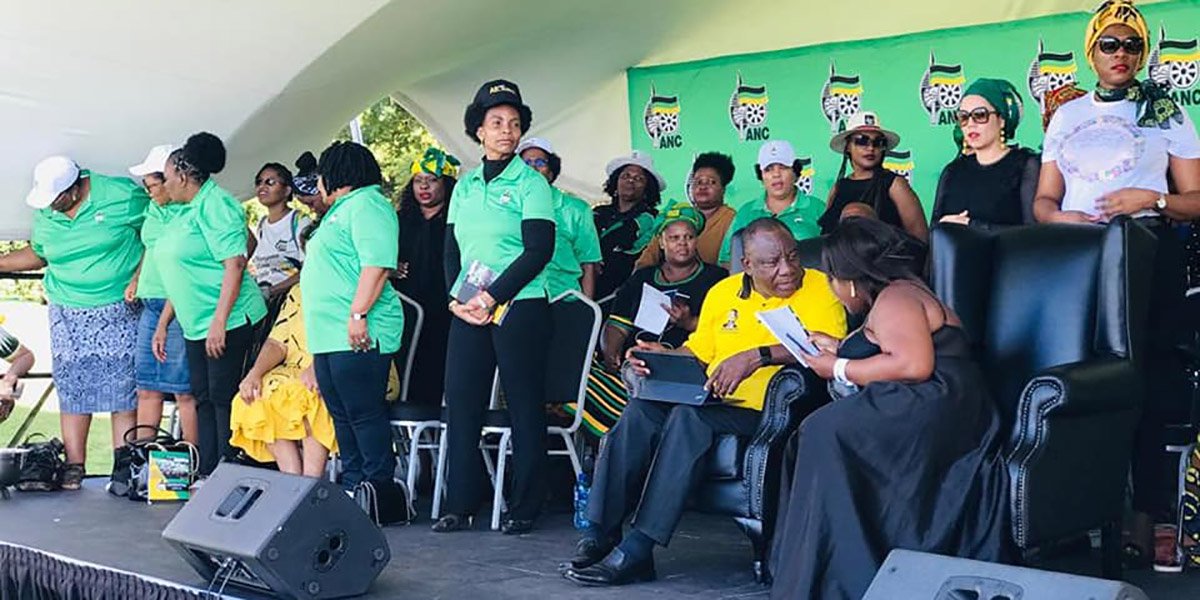 President Cyril Ramaphosa has praised the ANC Women’s League for being a ‘leader of society’, but the fight against gender-based violence and the celebration of International Women’s Day weren’t the only things on his mind.

The ANC Women’s League fundraising gala dinner on the eve of International Women’s Day presented a good opportunity for President Cyril Ramaphosa to share a stage with Bathabile Dlamini, whom he dropped from his Cabinet almost a year ago after the Constitutional Court found her to have been “reckless” and “grossly negligent” in the social grants debacle.

But Dlamini, who is also the ANC Women’s League president, didn’t make it to Blue Valley Golf Estate in Centurion for the event on Saturday night, which started three hours late after the golf day and the president’s conversation with young women ran over time. She was expected to come after attending a relative’s funeral in KwaZulu-Natal earlier in the day, but she didn’t and no apologies were made from the stage for her absence.

It would, perhaps, have been insignificant if she were the only non-attendee. Her deputy, Sisi Ntombela, was also not there, and was said to have been in the Free State (where she is premier) preparing for the next day’s event in her home town of Tweeling, where Ramaphosa spoke and conducted a ritual ceremony that made him sneeze for the opening of the Albertina Sisulu School of Leadership for Women.

Ntombela’s loyalties were previously said to have been with ANC Secretary-General Ace Magashule, but speculation in the ANC is that this had shifted towards Ramaphosa in recent months. Some are, however, still not entirely sure about her loyalties.

Housing Minister Lindiwe Sisulu, who was warmly welcomed as a women’s league member 10 months ago just before there was a word of her planning a presidential campaign, and who in November appointed Dlamini interim board chairperson of the Social Housing Regulatory Authority, was absent. Minister of Cooperative Governance Nkosazana Dlamini-Zuma, who was the women’s league’s candidate to replace former president Jacob Zuma in 2017, also didn’t make it. Quite a few of Ramaphosa’s loyal executive did make it, including Deputy Minister of Communications Pinky Kekana, who was recently elected vice-president of the Pan-African Women’s Organisation.

ANC MP Boy Mamabolo, who recently had to apologise to EFF leader Julius Malema after accusing him of abusing his wife, was also at the dinner tables and his name was read out as one of the smaller donors of the evening, alongside bigger donors such as the Motsepe Foundation and Wiphold, a women empowerment investment holding company.

The minister for women, Maite Nkoana-Mashabane, also the women’s league treasurer and host of the fundraiser, introduced the event with a song. She also welcomed the businesspeople present:

“They continue putting petrol, ching ching, into this organisation.”

The league is due to have its national conference this year, and is said to be somewhat short of money – hence this fundraiser. The upcoming conference will be closely watched by those in the ANC keen to see an outcome in favour of Ramaphosa. Dlamini, who last month called Zuma’s arrest warrant a travesty of justice, is said to be a frontrunner for another term.

The other league – the ANC Youth League – meanwhile, has been struggling to conduct its conference due to infighting, and another postponement has seen National Youth Development Agency boss Sifiso Mtsweni, considered to be a pro-Ramaphosa candidate, knocked out of the race because he would have turned 35 before the conference. While it’s not crucial to have the leagues behind him to ward off a challenge against his second term in 2022, it would make Ramaphosa’s work easier if the ANC were less fractured than it is right now.

Ramaphosa’s approach on Saturday night was, therefore, one of inclusion and flattery. The ANC Women’s League took the mandate of “renewal” following the ANC’s 2017 national conference at Nasrec “very seriously”, Ramaphosa said, and it’s “given effect to this mandate much more effectively than other structures of the movement”. It’s likely Ramaphosa was referring here to the youth league without naming it.

He continued: “You have sought to forge unity in the ranks of the ANC, and you have also gone beyond just the ANC, by mobilising the women of South Africa around specific issues.”

He mentioned gender-based violence and femicide, issues the women’s league has pushed in campaigns, which were also aimed at non-ANC members (this was probably also a nod by Ramaphosa to the sponsors, to indicate that their donations to the women’s league would also benefit society at large).

“You have given leadership in this regard, and you have also given meaning to the concept of the leader of society,” he said.

He singled out the league’s Young Women’s Desk, which mobilised young women dressed in little black dresses and with ANC doeke on their head during last year’s election campaigns to form a guard of honour every time Ramaphosa arrived at a venue to campaign. He thanked them for the role they played in the election campaigns.

“Now, where the ANC has lost its title of being a leader of society in some quarters, you have given that title back to the ANC through the work you have been doing as the ANC Women’s League,” he said.

The rest of the speech was devoted to repeating his promises to fight violence against women, which include amendments to the Domestic Violence Act to better protect victims, and amendments to the Sexual Offences Act to broaden the categories of sex offenders whose names are to be included in a national register, as well as laws to tighten bail and sentencing conditions for offenders.

Ramaphosa is also pushing his female empowerment drive on the continent, as African Union chairperson, but by the time he told the audience about opportunities for women entrepreneurs under the African Continental Free Trade Area agreement – which he sees as his continental legacy project – they were fidgeting and unattentive. Perhaps this was due to the wine on the tables that some had turned to, as it was well past 9pm by then. DM