Unemployment scourge: ‘The challenge is macro’ and there is hope 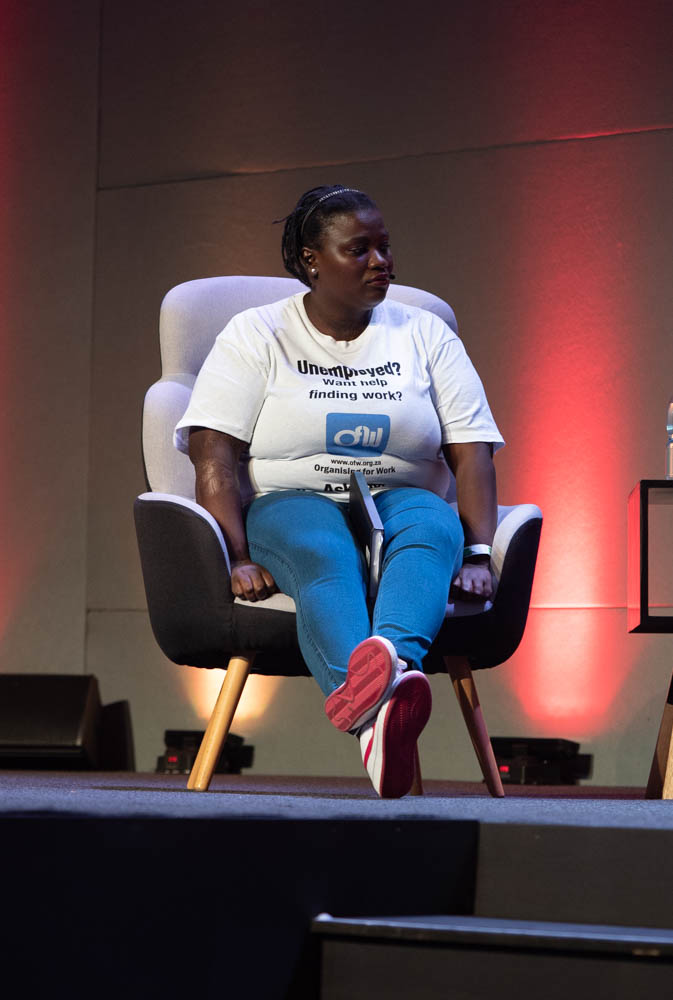 The panel discussion focused on unemployment at Daily Maverick’s The Gathering event in Cape Town was a poignant one. Amidst all the gloom, Pamela Silwana, a volunteer for the unemployed movement Organising for Work, said ‘hope’ was what kept her going.

The poor bear the brunt of South Africa’s economic malaise. The poorest of the poor are the unemployed, and their ranks are swelling. The official unemployment rate is just over 29% and is in reality much higher. This is shocking, but no surprise in an economy in which population growth has outpaced economic growth for years. The economy simply cannot generate enough jobs for a labour force that is rapidly expanding.

But Pamela Silwana, an activist volunteer in the unemployed movement Organising for Work has not lost hope. She told The Gathering:

“My daughter wants to be a doctor; we keep trying because there is hope, there should be hope.

“I love my children so much, this is why I go and volunteer,” she said to applause from the mostly middle-class audience, which seldom gets to hear the voices of the unemployed.

Silwana also spoke movingly about the pain of unemployment and the challenge and costs of doing basic things, such as going for an interview. There is a vicious circle at work, where the lack of funds constrains one’s ability to even take a taxi to an appointment, while self-confidence slides.

Silwana, a 33-year-old single mother of three from Gugulethu, Cape Town, also bemoaned the aversion of the private sector to invest in townships, which moderator Judge Dennis Davis said perpetuated the “spatial geography of apartheid”. That may not be 100% on the mark – shopping malls, for example, are springing up all over the place. But the broader point is true. The bubble that is Sandton has been a bustle of construction activity in recent years, while you don’t see many cranes in neighbouring Alexandra. The tallest building in Africa is not in a township.

Neil Coleman, co-director of the Institute for Economic Justice, said: “The nature of the challenge is a macro one.”

He said that contrary to the popular narrative, South Africa had resources that could be directed to that challenge, noting that companies have R1.3- trillion sitting in the bank. They might respond that they would like to see a better investment environment to risk their capital in, which is also a macro issue.

Coleman said bold action was needed, and there were examples aplenty, including the US Federal Reserve’s emergency decision this week to cut interest rates by 50 basis points to cushion the potential economic impact of the Coronavirus.

“There is absolutely no reason why interest rates should be as high as they are… There is no reason why monetary policy should be so hawkish,” he said. A number of commentators have made precisely this point against the backdrop of South Africa’s high unemployment and low growth and low inflation environment, which is the ideal setting in many ways for monetary loosening.

Coleman also noted that: “You don’t need to address corruption or capacity to cut interest rates.” South Africa’s key repo rate stands at 6.25% and the Reserve Bank’s Monetary Policy Committee is meeting in less than two weeks and could cut for a second time this year. Still, it is doubtful the SARB would make the deep cuts that Coleman probably thinks are appropriate.

Still, as Silwana said, one can always hope. DM