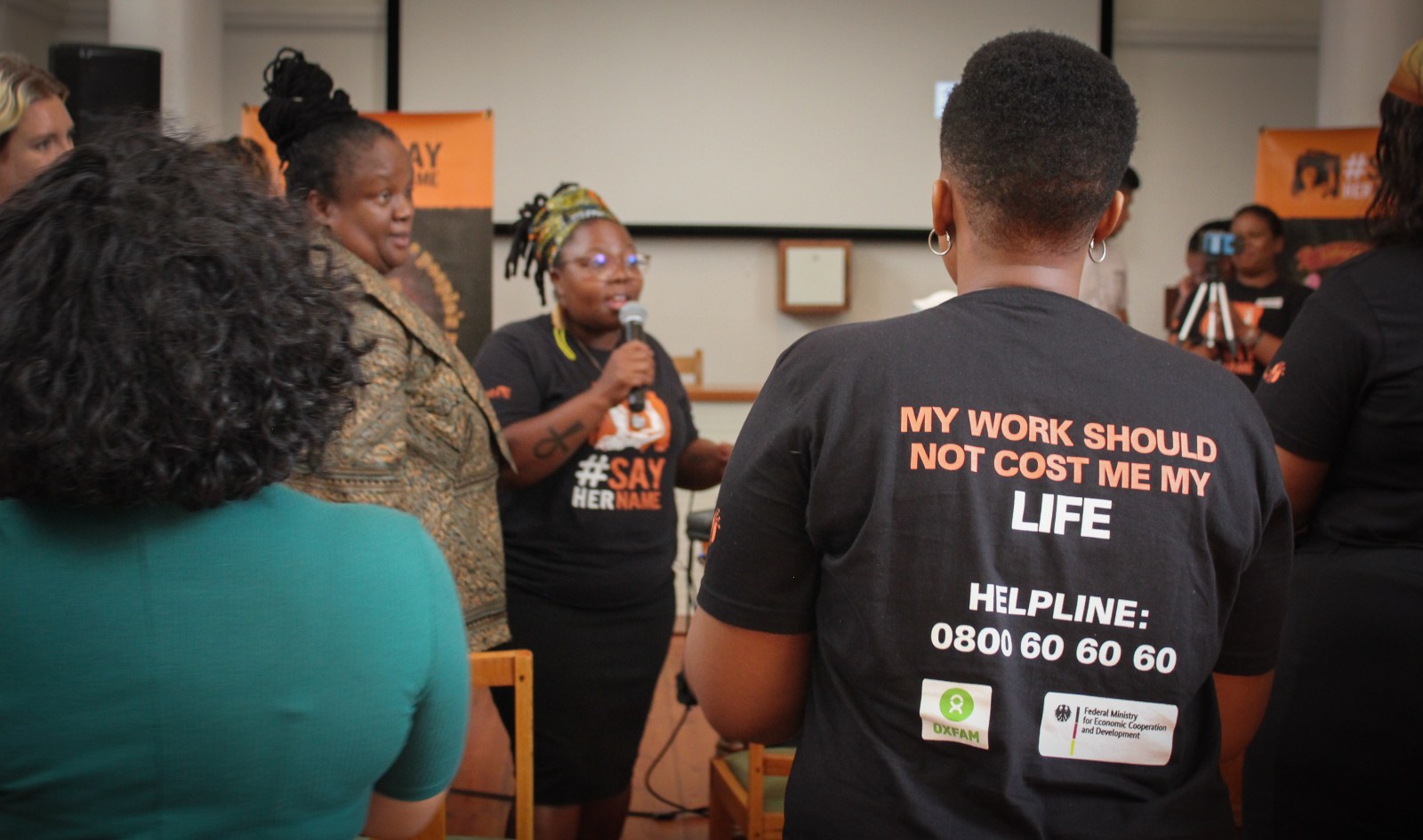 Members of the audience sing struggle songs before the announcement of the findings of the #SayHerName report on the deaths of sex workers in South Africa in Cape Town, 5 March 2020. (Photo: Christi Nortier)

Since 2014, most of the sex workers who died in SA were murdered – often while working. The #SayHerName campaign has tracked down and described the cases it could find and has compiled them into a data-based report.

In the past two years, 101 female and transwomxn sex workers died in South Africa. Most died before the age of 40 and 45% of the deaths were attributed to murder.

However, few get officially recorded by the government or the media. The cases of murdered sex workers rarely reach the pages of the media – the report found that only 10 out of the 101 deaths were reported by the media.

This is according to the #SayHerName campaign report, Female and Transwomxn Sex Workers Deaths in South Africa: 2018-2019, launched by the Sex Workers Education and Advocacy Taskforce (SWEAT) on 5 March 2020 in Cape Town.

The annual report was started in 2016 as a way to not only keep a numerical record of the deaths of sex workers, but also to publicly recognise those who had lost their lives to violence while doing their work, and to a demand for justice for those who were murdered.

The #SayHerName campaign is active all year round. In December last year, the campaign commemorated the International Day to End Violence against Sex Workers by saying their names. Video: Sex Workers Education and Advocacy Taskforce.

The researchers consulted the sex worker community and their civil society networks to track down and record all known deaths of sex workers between 2018 and 2019 in South Africa. They verified information by contacting the family and friends of those who had died.

Researchers found that government data was scarce and unreliable as doctors and family members were unlikely to declare the deceased’s occupation as sex work in official documents because it is stigmatised and criminalised.

Sex work is criminalised in South Africa, therefore, sex workers are not protected by law and cannot access justice like other workers can, when they are injured at work for instance. According to the report, sex workers face constant harassment from “public nuisance” municipal by-laws, which pave the way for abuse as they have little access to justice to assert their rights.

Discussions held between advocacy group representatives at the launch attributed the murders of sex workers to this unprotected work environment.

The provincial director of the Commission for Gender Equality, Sixolile Ngcobo, said in her keynote address that the commission agrees with advocacy groups when they say sex work is work and the murder of sex workers is part and parcel of femicide in South Africa.

“We cannot have work that does not have labour rights… South African sex workers have been left behind. We have tried to put rights for almost all other types of jobs, but we find it very hard to put conditions which are conducive for work for sex workers,” she said.

She blamed this on policymakers’ inability to set aside their own religious, cultural and traditional beliefs or the privilege they are afforded by patriarchy in order to introduce laws which protect sex workers.

“At the end of the day, I don’t understand what it is that the sex worker takes away from a policymaker when they try to claim their rights. They are simply fending for the survival of their family and themselves. So, what is it that is taken away from a policymaker by doing that? We need to ponder this, because it’s part of the hierarchy of rights,” she said.

Ngcobo pointed out that when a sex worker dies, their family loses the breadwinner and cannot claim compensation. This echoes the findings of the report that often the sex worker had been the sole earner in the family.

Nosipho Vidima, human rights officer of SWEAT, told of an instance when she contacted the aunt of a deceased sex worker and found out that the family could not even attend the funeral because they did not have money for transport.

She said that as researchers and activists it had been emotionally exhausting to do the research into such gruesome deaths and to ask families to relive the pain of the death. During their research, they lost one of their own to the violence.

Ayanda Denge, the former chair of the board of SWEAT, was a lifelong activist promoting social justice around sex work, LGBTQ+, HIV/AIDS, cancer and access to housing.

She was stabbed to death in her room while taking part in the occupation of a building in Cape Town during a Reclaim the City Campaign in March 2019.

Her case remains unsolved. The report is dedicated to her and her name.

The report is as much focused on the research as it is on vignettes of the lives of sex workers who were murdered.

One such person was Yoliswa, a 30-year-old sex worker from Zimbabwe who was stabbed to death in the face and neck by a client after he accused her of stealing his wallet. Her body and the news of her death never got home to her family in Zimbabwe.

The report concludes by stating that the act of saying the names of at least some of the sex workers who prematurely lost their lives does go a long way to celebrating the courage and vibrancy of all sex workers while still demanding justice for their deaths. MC