Does SA have a plan to deal with those returning from ISIS? 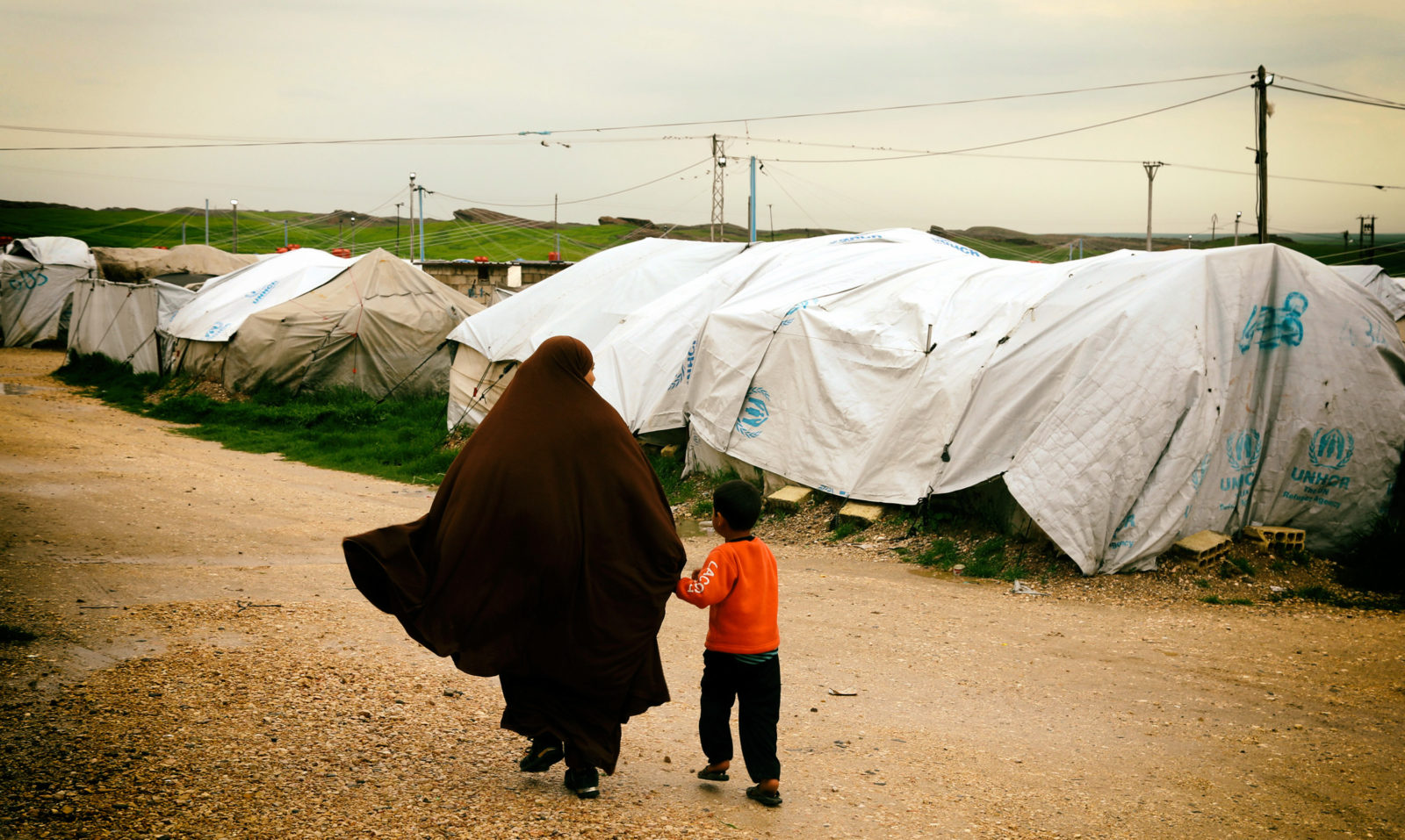 An unidentified woman, reportedly a wife of a suspected ISIS fighter, walks with her son at Roj refugees camp in Hasakah, north-east of Syria, 30 March 2019. (Photo: EPA-EFE / Ahmed Mardnli)

The ISIS ‘caliphate’ crumbled in 2019, but the challenges posed by the ultra-radical Islamist group persist. One question governments around the world are dealing with is: how should citizens returning from ISIS camps be treated? When it comes to South Africa, it’s unclear whether the government has a plan at all.

Here’s how it went when Daily Maverick tried to find out what the official South African government policy is towards returning ISIS fighters and their families.

The first inquiry went to the Department of Justice, where a spokesperson described the question as “fascinating” and said he would consult with the department’s international relations experts.

The spokesperson returned to say that the best person to speak to would be a longstanding and senior figure in national intelligence.

When contacted, that person informed us that he was “not in a position to comment”, and referred Daily Maverick to the spokesperson for the Department of State Security, Mava Scott.

Scott, in turn, passed us on to the Department of Home Affairs, where a spokesperson said: “Please engage them as they deal with such cases on a regular basis. They are the custodians of both policy and legislation on issues of citizenship and repatriation.”

At the Department of Home Affairs, our request for comment is still languishing in the inbox of a spokesperson.

The reason we wanted to look into this question was because the issue of what to do with citizens who have participated in the ISIS conflict is one with which governments globally have been grappling – particularly since the collapse of the so-called caliphate in March 2019.

A July 2019 report from the Combating Terrorism Centre at West Point in the US recorded almost 53,000 foreigners in Islamic State camps in Syria. An even more pressing diplomatic problem is the fact that of these, there are almost 7,000 foreign women and more than 6,500 foreign minors.

It is almost certain that South African citizens are among them. On 2 February 2020, the Sunday Independent claimed that “more than 20 widows of South African men who died in Syria fighting for terrorist group Islamic State want to be repatriated”.

The newspaper alleged that the former South African ambassador to Syria, Mohammed Dangor, was lobbying senior government figures to try to have these women repatriated. Dangor has since forcefully denied the allegations.

Vrye Weekblad subsequently reported that a number of South African families are being held in camps in northern Syria, with at least seven South African women indicating their desire to return to South Africa.

There are no firm figures publicly available on how many South Africans may have left the country to join ISIS over the past five years. In a May 2017 report by the Institute for Security Studies, more than a dozen South Africans were stated to have been deported from Turkey in 2016 after trying to reach Islamic State territory.

In December 2018, Afro-Middle East Centre director Na’eem Jeenah reportedly estimated that between 80 and 100 South Africans had returned home at that point from Islamic State camps abroad.

What happened to them upon return? The South African government appears to have no desire to discuss this matter publicly. The 2017 Institute for Security Studies report states, however, that the government “has not employed automatic responses that would lead to arrests or prosecution” – but has “nonetheless maintained surveillance of the returnees”.

The same report notes that “many returnees were women and children”.

What to do with women and children caught up in ISIS activities is the stickiest aspect of this situation. The mere fact that they are women is no guarantee that they were not playing an active combatant role, as ISIS – despite its notorious misogyny – is known to have used women to carry out military activities.

But it is also likely that the majority of such women were not engaged as combatants, and some may even have been brought to Syria under false pretences.

In February 2019, for example, a Sky News documentary featured a 45-year-old South African woman, Sadaah Modise, who was living in a Syrian refugee camp with her three young children. Modise’s mother-in-law was quoted as saying that she did not believe Modise knew her husband intended to join ISIS when they embarked on what she was told was a pilgrimage to Mecca. Modise was also reported to have mental health issues.

One of South Africa’s foremost terrorism experts, Jasmine Opperman, wrote recently for Vrye Weekblad: “The reasons for [women] moving to the caliphate will differ from case to case, be it following their husbands, being misguided by Islamic State propaganda or merely the search for a purpose within the caliphate.”

But, Opperman warned: “Upon arrival in the caliphate all underwent a one- to two-week indoctrination programme – a programme aimed at ensuring support for the Islamic State and therewith ensuring loyalty and support for the terror group.”

Children, meanwhile, will have been exposed to similar indoctrination, to acts of brutality and to horrific conditions within the camps.

“The impact of these experiences on South African women and children will remain vague up until interviews are conducted,” Opperman writes.

The response of governments globally to the issue of repatriation differs considerably.

The US and the United Kingdom revoke the citizenship of those who joined ISIS in any capacity, including women, while those who have managed to return home face automatic prosecution.

Belgium, Russia and France repatriate children but leave their mothers behind, while Norway at one stage opted to repatriate only orphans. (Psychologists have strongly cautioned against separating mothers and children, due to the resulting trauma.)

Denmark has introduced legislation that refuses to automatically assign citizenship to infants born to ISIS-affiliated parents. The Iraqi government holds children from the age of nine up to be legally accountable for their involvement in ISIS.

And then there are countries which take the view that rehabilitation and reintegration programmes are a better way to deal with returnees. Indonesia is one such country – though its project faced controversy after one woman completed the programme and went on to attempt an explosive attack.

Perhaps counter-intuitively, the country which claims to lead the way on deradicalisation is Saudi Arabia. More than 3,000 men have passed through the Prince Mohammed Bin Nayef Centre for Counselling and Care – facilities include a swimming pool and art therapy classes – and the centre claims an 80% success rate.

And in South Africa?

Opperman notes that accountability for active participation in terror activities is dealt with by the South African Protection of Constitutional Democracy against Terrorist and Related Activities Act 33 of 2004. But, as she points out, the act is focused on prosecution for the intention to commit acts of terror – which appears hard enough for the state to prosecute when such acts occur on home soil, let alone abroad.

“The concerning factor is: does the South African government security cluster truly understand the need for a CVE [countering violent extremism] strategy beyond traditional notions of law and order?” Opperman asks, and answers: “I am not convinced”.

For now, there appears to be no appetite in the South African government to take the public into its confidence about the strategy for handling ISIS returnees – or whether such a strategy even exists.

The Combating Terrorism Centre’s report concludes on a warning note: “Justice and recovery for the victims of the Islamic State, as well as prevention of future instability and conflict in the region, is paramount, but it is jeopardised by states’ inaction or hesitancy to manage their citizens.” DM