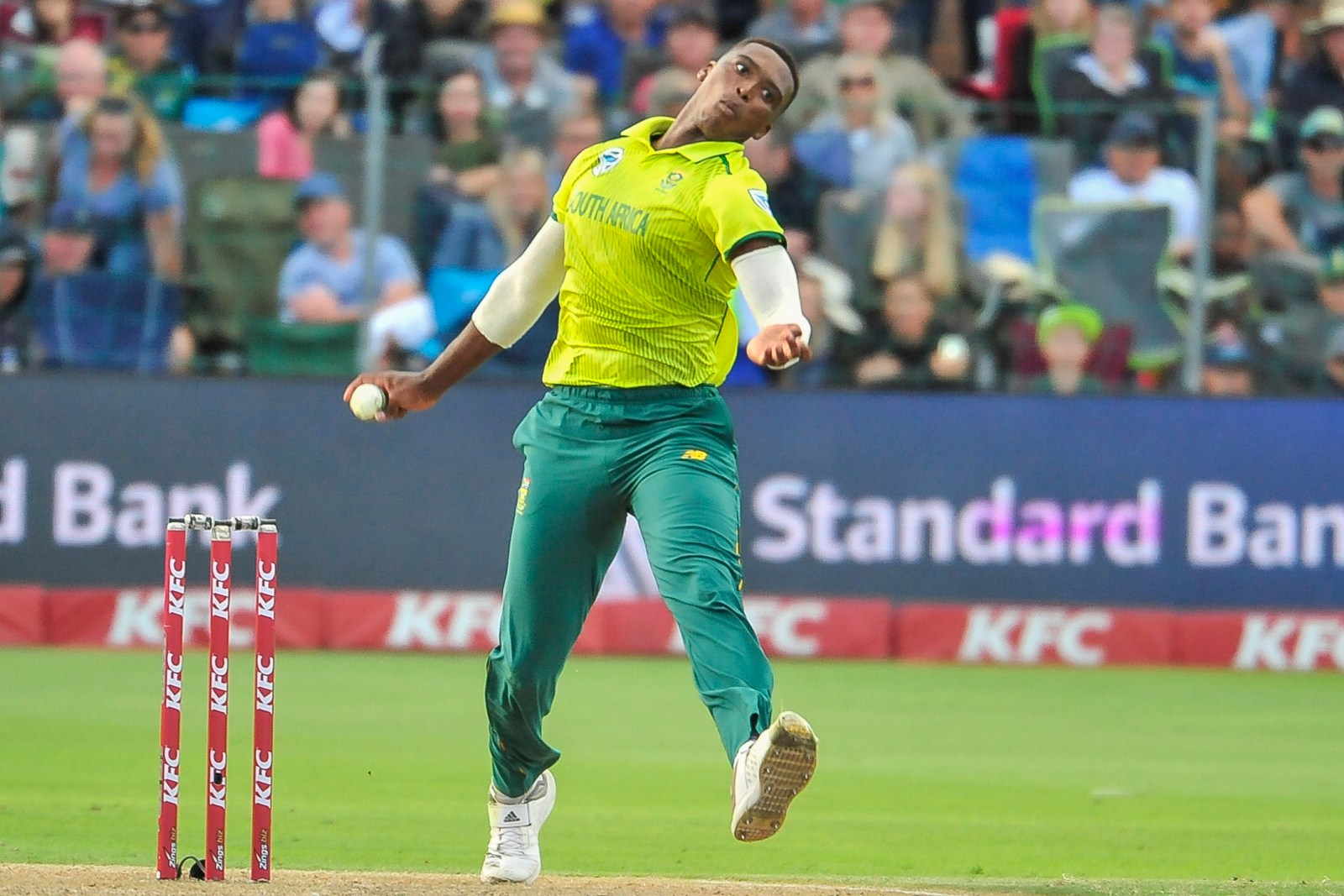 Lungi Ngidi of the Proteas during the 2020 International 2nd T20 Series match between South Africa and Australia at the St Georges Park,Port Elizabeth on 23 February 2020 (©Deryck Foster/BackpagePix)

South Africa beat Australia by 12 runs in their second T20 match in Port Elizabeth on Sunday to level the three-match series 1-1.

South Africa’s bowling line-up produced a remarkable performance to hand their team what seemed an unlikely victory at St George’s Park on Sunday – the Proteas winning by 12 runs.

Needing 20 runs from the last two overs, six wickets in hand and with David Warner at the crease on 65 not out, it was an equation that would almost always favour Australia.

Enter fast bowler Kagiso Rabada. He conceded only three runs and took the wicket of Matthew Wade in the 19th over of the innings. It transferred all the pressure onto Australia’s batsmen in the final over and they simply couldn’t respond.

Suddenly 17 off six balls looked a daunting task and Australia duly fell short as Anrich Nortje backed up Rabada’s excellence with a tight last over. It only cost four runs and included Ashton Agar’s wicket. Warner was left stranded on 67 not out off 56 balls as South Africa avenged last Friday’s thrashing at the Wanderers.

The Proteas won the toss and opted to bat first. A total of 158 for eight felt 20 runs short of a winning score after they made a scorching start with captain Quinton de Kock leading the way. After six overs the Proteas were 59 without loss, De Kock having scored 43 of them off 20 balls.

Australia’s bowlers gradually fought back through some clever bowling from spinner Agar and seamer Kane Richardson in the middle overs and a tight last two overs from Pat Cummins at the death.

The total South Africa eventually reached appeared to be one Australia’s formidable batting line-up would blow out the water, especially considering the events of the previous match at the Wanderers when the visitors scored 197.

However, South Africa’s pace bowlers – Rabada, Lungi Ngidi and Nortje all produced a masterclass in death bowling, with spinner Tabraiz Shamsi also contributing immensely after only conceding 17 runs in his four overs.

“A couple of games before this, our death bowling had struggled a little bit. The guys came out here today and they bowled really well and they stuck to their plans,” said De Kock after the game.

Australia seemed to be cruising after a solid 50-run partnership between David Warner and Steve Smith. Then a shift in momentum came from the bowling of Dwaine Pretorius, who had Faf du Plessis take a stunning diving catch to break that partnership and send Smith packing for 29.

Still, there was no reason for Australia to panic. They needed 61 runs from seven overs for victory and still had eight wickets in hand.

However, they didn’t bet on the grit of the Proteas bowlers, who took wickets at regular intervals at the end. Their cause was ably assisted by some exceptional fielding from their teammates who made sure Australia were thoroughly suffocated and frustrated.

Ngidi stepped up with Australia trying to rebuild after Smith’s departure. And the seamer picked up two wickets in two overs; one coming courtesy of an exhibition in fielding from Du Plessis and David Miller, who combined for a brilliant catch to dismiss Mitchell Marsh. Du Plessis plucked the ball on the edge of the boundary and realising his momentum would take him over the rope, threw the ball infield for Miller to complete a diving catch.

This left the visitors needing 21 runs from 13 balls for victory. But they were under the cosh, with the massive crowd at St Georges willing on the home team, and the Proteas players with their tails firmly up.

Rabada and Nortje were given the responsibility of bowling in the last two overs of the game. The pair did exceptionally well, maintaining great line and length to ensure that the Australians only fed off scraps and no boundaries.

They picked up a wicket apiece to boot, and so it was that the Proteas picked up what seemed an unlikely 12-run victory to level the series one-all with one game left.

Earlier, the hosts had made wholesale changes with Dale Steyn sitting this one out, replaced by Nortje. Reeza Hendricks also returned to the team, in place of Jon Jon Smuts, while a straight swap saw Pretorius replace Andile Phehlukwayo.

Hendricks opened the batting with De Kock and just never looked settled – eventually dismissed by Kane Richardson for a 17-ball 14.

His skipper, on the other hand, started off like a house on fire, as he always does. He went on to finish with 70 off 47 balls (five fours and four sixes). It was his first half-century against Australia in this format and his sixth overall.

That knock earned him the man-of-the-match accolade.

Rassie van der Dussen, back in his normal middle-order position, was the only other Proteas’ batsman to put in a meaningful contribution. He notched up 37 off 26 balls.

Despite having wickets in hand, South Africa ran out of time, setting Australia what looked like a simple to total to get – 159 for victory.

That they defended this total will be redemption after their obliteration in Johannesburg and they will head to the final match in Cape Town confident of securing victory. DM