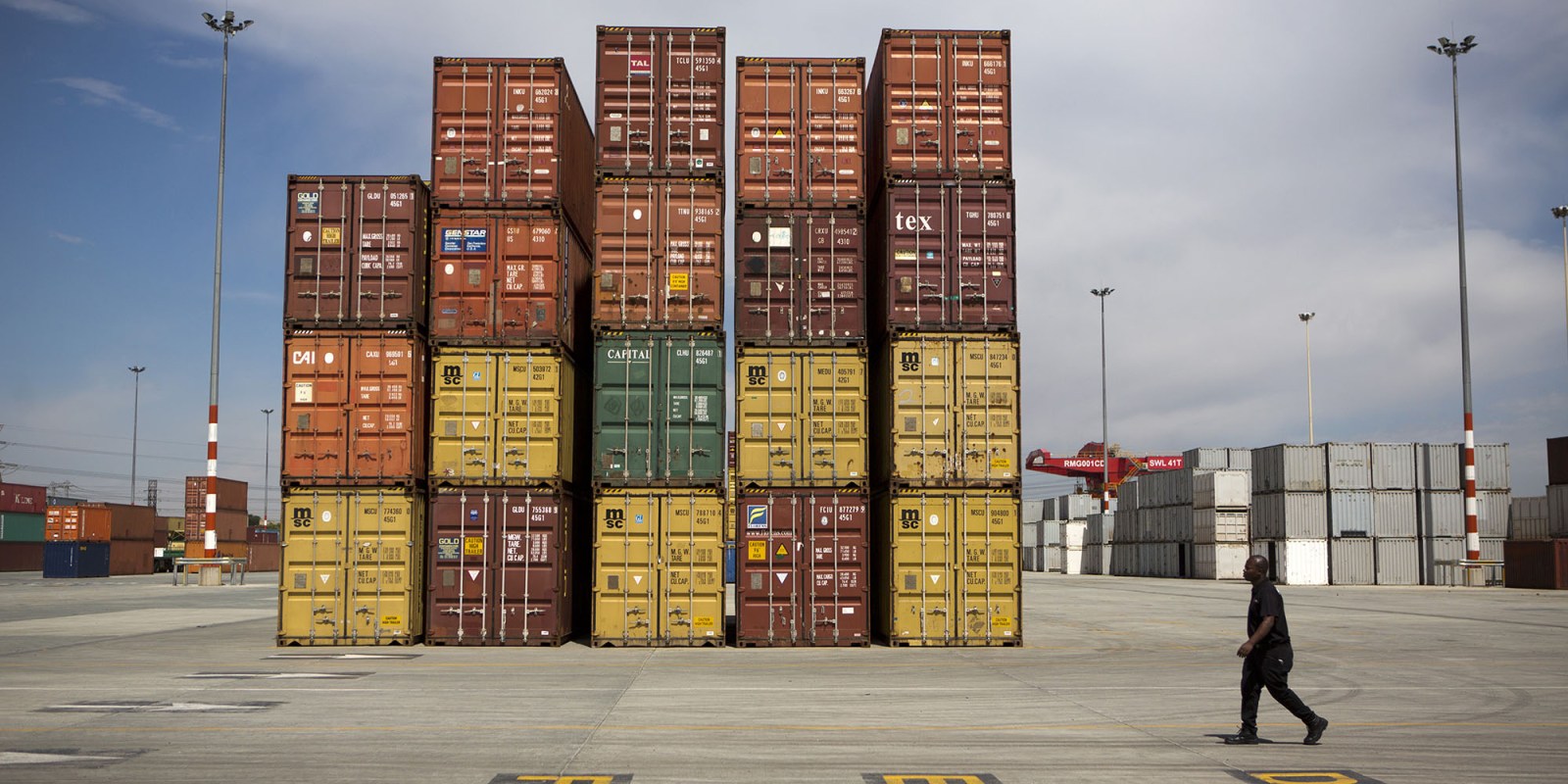 While government is supportive of private sector involvement in the handling of freight, and Transnet claims to be very supportive of it, nothing is happening, says the writer. (Photo: Karel Prinsloo / Bloomberg via Getty Images)

Cyril Ramaphosa may dream about bullet trains, but the reality is that just getting this country’s imports and exports from Durban to Gauteng is a challenge for Transnet. While Transnet encourages private sector participation in word, its deeds say something else.

A fatal train crash at a station in Roodepoort on Wednesday 12 February 2019, involving a locomotive and freight train, resulted in a shutdown of the line running from the West Rand into Johannesburg.

For transport planners, it was another reminder that running freight trains in a rapidly densifying urban area is a logistical nightmare.

Adding to this nightmare is the Natal Corridor (Natcor) between Johannesburg and Durban, the country’s primary route — more like bottleneck — for import and export of goods, minerals and metals. Traditionally the railway link, managed by Transnet, handled about 45% of Durban-Gauteng container traffic, but this has fallen to less than 25% thanks to infrastructure failure, rampant cable theft and uncoordinated planning.

In a best-case scenario, 30% of trains arrive at either destination on time.

This is a major constraint to economic growth and competitiveness.

A paper produced by the World Bank’s Trade and Competitiveness Global Practice Group in 2016 noted that constraints in the port and rail network are eroding the competitiveness of South African exporters. Policy recommendations included institutional reforms to promote competition and get the prices right; the introduction of private sector participation to increase investment and improve service delivery; and more effective intermodal, inter-regional, and institutional co-operation to improve the operation of the freight logistics network.

While the government is supportive of private sector involvement in the handling of freight, and Transnet claims to be very supportive of it, nothing is happening.

There is no lack of interest from the private sector. There are two sets of developers intent on creating inland container ports, with road and rail links that could help to streamline the Transnet container service and reduce time and costs for importers and exporters.

But they need Transnet to come to the party.

Transnet has been working on plans to revive its freight rail business for a decade, something that was prioritised in both the National Development Plan and the Presidential infrastructure plan.

“Our immediate priority is to improve throughput on Natcor,” says Gert de Beer, chief business development officer at Transnet. “We are seeing green shoots — the pipe in the middle is getting better, but we now must decongest Durban and Gauteng. This is where we are exposed to theft, community unrest and a lack of efficient integration between Prasa and Transnet.”

Globally, it’s clear that rail is a significant value proposition, he adds. “Amazon has acquired freight containers for rail and is now executing a pilot programme on the West Coast. A few years ago I would have said you are crazy. But today it’s a reality.”

However it is only once Transnet can open up some capacity on its line and provide some kind of service delivery guarantees that it can consider allocating space to private sector cargo, he says.

Meanwhile, the two competing plans to develop the multi-modal (rail and road) container facilities inland are battling it out for share of mind.

One is a private initiative called the Distribution Junxion, Port of Gauteng which will be situated south of Ekurhuleni, where it borders conveniently on the Durban-Johannesburg railway line. The facility is being developed by property company NT55 Investments.

The other is the well-publicised public-private initiative called Tambo Springs. In 2019 Transnet awarded a concession to industrial holding company Southern Palace to develop and operate the R2.5-billion Tambo Springs intermodal terminal in Ekurhuleni.

Both of these facilities will lie outside what is called the “Prasa complex”, which is strategically important. Once freight trains cross into this complex — as they do to get to the container port of City Deep/Kaserne — they must defer to passenger trains. This translates into huge delays given the inefficiency of Prasa. Imagine telling Amazon the train their freight is on will take three hours to travel 25km?

While the country needs streamlined freight operations urgently, Tambo Springs has not broken ground, despite being awarded the concession in July 2019 — and the Port of Gauteng is still in talks with anchor tenants.

What is causing the delay?

“We do want private-sector intermodal partners. They will play a key role in aggregating and facilitating [and growing] the movement of cargo on to rail and off rail,” says De Beer. “The challenge is to ensure the performance of the Durban-Gauteng freight system improves before we can allocate trains to these private-sector players.”

The private players are a bit early to the party he says.

“We are working diligently with Southern Palace to make the project bankable. We haven’t concluded negotiations yet for many reasons,” he says.

For Tumi Mohulatsi, CEO of Tambo Springs Development Company — which owns the land, but not the concession — the entire process is an exercise in patience.

“We have been working on developing this land for over a decade now. There is a lot of negative news about us in the media, but we are ready — the site is correctly zoned, we have the necessary permits and approvals and have complied with environmental regulations.

“Planning for bulk services is at an advanced stage. What we need is for Transnet and the Concessionaire (Southern Palace) to finalise their negotiations,” says Mohulatsi.

While in theory, both projects are private-sector driven, Tambo Springs is known as the “Transnet project”, raising questions about how honest Transnet’s intentions are with regard to possible competition. “There wouldn’t be any unfair treatment,” says Mike Fanucchi, chief customer officer at Transnet.

“There is a huge demand on our Natcor line that is currently unmet. Our capacity has been badly curtailed by cable theft, washaways and the like. We have to analyse these requests for new capacity in light of our obligations to existing customers.”

But Nortje does not believe a word of it and is ready for war.

“Transnet is simply trying to stall what will be faster and cheaper competition. Tambo Springs does not have the necessary approvals and we are going to court to ensure the rule of law is upheld.”

Meanwhile, the demand is growing.

“My clients are among the biggest exporters in South Africa — one in particular exports 40 containers a day. If Transnet would commit to these players, I could put three customers in there tomorrow,” says Martin Bailey, chairman of Industrial Logistics Systems.

Both projects are strategically important. Tambo Springs, Bailey says, is much bigger and therefore will require more funding, which could be a limiting factor.

Will the projects ever get off the ground? “The need is there. The commitment from the private sector is there. But I don’t think anyone knows. Transnet Freight Rail talks the talk, but they have 20 strategic plans in place,” Bailey says.

“A new inland dry port, where all the clearing and customs duties can be done, will minimise the total logistics cost for importers and exporters.

“But do not underestimate the complexity involved in setting something like this up. You need everyone on board — from Transnet to the municipalities, to the Gauteng Economic Development Agency and beyond. It is not easy.” BM