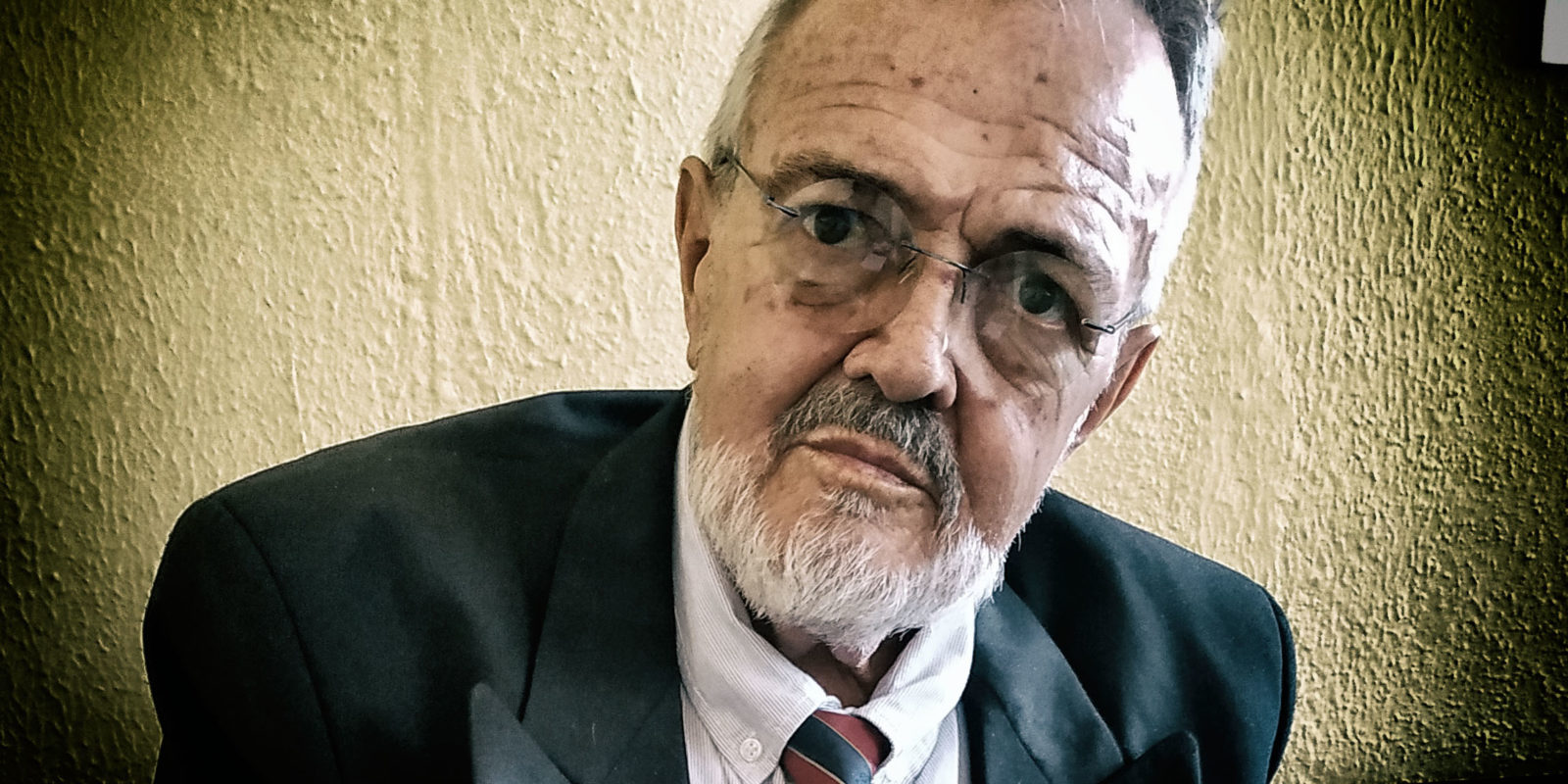 Paul Erasmus, the dirty tricks specialist has made few friends since spilling the beans on Security Branch tactics and atrocities. He said he was in court this week to tell the truth. (Photo: Ufrieda Ho)

An ex-Security Branch dirty tricks sergeant tells the Joburg High court that Aggett’s torturer, Steve Whitehead, was a daddy’s boy and a boozer, who had admitted ‘he went too far trying to get a breakthrough with Neil Aggett’.

Creepy, manipulative, troubled, attention-seeking — they’re adjectives used to describe Paul Erasmus, the Security Branch sergeant who has been testifying in the hearings into the reopened inquest into the death in detention of Neil Aggett.

Erasmus may be loathed and distrusted by some, but he’s also a vital link, shedding light into understanding how the apartheid-era Security Branch police operated out of John Vorster Square police station and ultimately to understand their hand in Aggett’s death. Aggett, a physician and trade unionist, was detained for 70 days and was found hanged in his cell on 5 February 1982.

Erasmus took the stand for two days this week. He detailed how the Security Branch operated with “one foot in the law and one on the outside, but with the full knowledge of the regime”.

Erasmus was part of the “Stratcom” division on the ninth floor of John Vorster Square, not involved directly with interrogations of detainees, but the “dirty tricks” of monitoring and intimidating activists and lawyers, damaging their cars, planting bombs, creating false narratives of targets, bugging homes and offices and eavesdropping with phone taps. It was to “make activists’ life hell” and bring evidence to the 10th-floor investigators to build cases.

He painted the picture of a closed, paranoid inner sanctum of policemen on the ninth and 10th floors who were “trained to apply torture without evidence, like hitting someone with an open hand or rolling up a club in a magazine or newspaper”. They also “fixed” identity parades to confuse witnesses and pretended to be the district surgeon to give false consultations to detainees, including “prescribing” and administering vitamins as medicine.

Erasmus appeared in court yesterday (Wednesday) wearing a tie he said was given as a token of commendation to select members of the inner core of Security Branch policemen. He also said it would be the last time he would ever wear the tie.

The Security Branch officers were also contradictory — fearing their superiors, praying at parade and knowing their place was to follow instructions. But they dodged work routinely with excuses and partied on a sanctioned, but secret money fund and filled up their private cars with state fuel.

“We thought nothing of it because we were doing it for the state”.

Erasmus admitted on the stand that he is a bitter man, but insisted that his testimony was truthful. Speaking out about Security Branch tactics and atrocities has also been about self-preservation, he told Daily Maverick. He said his relationship with his former colleagues and the police force soured when he started flagging buggings and anomalies linked to the controversial Mossgas project.

The apartheid-era white elephant that cost billions was meant to capture natural gas to convert to fuel and to make apartheid-era South Africa self-sufficient in terms of fuel supply. His actions made his superiors uncomfortable and unhappy, he said. His resentment grew as he was passed over for promotion. His transfer to the Western Cape in 1991 was approved, but without transfer costs and he was accused of “running away”. Then for some months his salary payments were repeatedly processed incorrectly. His resentment grew even more. He left the police in 1993.

In 1994, he testified about Stratcom activities and Security Branch atrocities in the Goldstone Commission. He later also sought and was granted amnesty from the TRC.

Erasmus said this came at a high cost to him and his family, including death threats and that “Dylan [his son] grew up helping me look for limpet mines under our car”.

Speaking from the stand this week, Erasmus told of how he came to be close with Lieutenant Steve Whitehead, Aggett’s chief interrogator. In the days after Aggett’s death the Security Branch was under pressure “to cover up and control the mess” and went into high gear to try to find evidence that Aggett had been depressed, had family problems or was prone to suicide — to prove Aggett “was a walking suicide who fell from his mother’s womb with a loaded and cocked pistol”.

“We knew there were going to be protests locally and internationally — this was a situation that had to be controlled,” he said, and added that the death in detention of Steve Biko and the PR nightmare that had been to the government loomed large.

Their quest for evidence began with a road trip to Aggett’s former school in Grahamstown and then to the University of Cape Town. They found nothing other than that Aggett was a top student and was well-liked and fondly remembered.

They ended up in Aggett’s parents’ home in Somerset West where Erasmus said he bribed the domestic helper R30 and entered under false pretences to search the house while the Aggetts weren’t at home. He managed to steal a pile of letters, which turned out to be “run of the mill” — his illegal search was disturbed by a neighbour.

The search, with no useful information, landed the pair in trouble, but Erasmus said he had been the “sergeant thrown to the wolves”. He was fined even though the money for the R200 fine came out of the secret fund.

Whitehead, meanwhile, he said, was protected. He described Whitehead as “self-centred, a careerist and not a nice guy. He had developed a reputation that he used his family connections in the police; his daddy was a brigadier,” said Erasmus. Erasmus himself joined the Security Branch because of a family connection, he revealed.

However, he also said he and Whitehead would become “house friends”.

Their road trip to the Cape was marked with what he described as partying with high alcohol consumption that at one point included picking up two female German hitchhikers, more drinking and braaing, paid for by the secret fund.

He also said during the trip Whitehead showed him the statement Aggett had written days before he died. Erasmus said it stood out for him because unlike a standard affidavit that began with a person’s particulars, this statement started with Aggett declaring that “I am a communist and I am a Marxist”. It was a declaration of allegiance to what the apartheid government saw as its greatest threat.

Erasmus also said Whitehead had commented that he “had gone too far in trying to make a breakthrough with Neil Aggett”. He said that he didn’t press Whitehead on the comment because Whitehead was his superior officer. Erasmus said he does not believe Aggett committed suicide and said he never met Aggett, not even in passing, even though Whitehead fingered him as the person who tortured the detainee by trying to strangle him with a towel.

Erasmus eventually had a falling-out with Whitehead around 1984. “It was because of wife-swapping,” he told Daily Maverick. Erasmus claimed Whitehead and his wife had wanted Erasmus and his wife to be their swinging partners. When he declined, their friendship cooled.

Liz Floyd, Aggett’s partner at the time, who had also been detained and tortured, said for years after Aggett’s death Erasmus was directly involved with campaigns of monitoring, intimidation and harassment of her.

Floyd was in court listening to Erasmus’s testimony on Tuesday. She called him a “troubled” character and remembered his “heavy breathing” phone calls with a sneer.

Points in Erasmus’s testimony were also questioned by advocate Stephanus Coetzee, representing former policemen Nicolaas Deetliefs and Roelof Venter. Coetzee said his clients had no recollection of policemen pretending to be the district surgeon or a site Erasmus named as being where secret Security Branch documents were burnt. Erasmus also conceded to Coetzee’s assertion that the policemen were carrying out orders and were not in a position to refuse instructions.

Erasmus concluded his testimony with an apology to the Aggett family. Both Jill Burger, Aggett’s older sister, and his nephew Stephen, son of his brother Michael, have been in court since the beginning of court proceedings.

Burger said: “I have to accept his apology and I have to believe that he has to find his own absolution and make his peace before he meets his maker. And I think he has to be commended for coming forward to tell the truth in this inquest.

“However if it were Steven Whitehead saying those things though, I don’t think I’d feel the same.”

Whitehead never applied for amnesty and died, aged 62, in April 2019. It was just days before the NPA announced it would reopen the Aggett inquest. DM

Mkhuseli Sizani for GroundUp • 1 hour ago

And we’re off! How to travel safely under level 1 lockdown