Sharon Ekambaram: A versatile activist with a rebel spirit 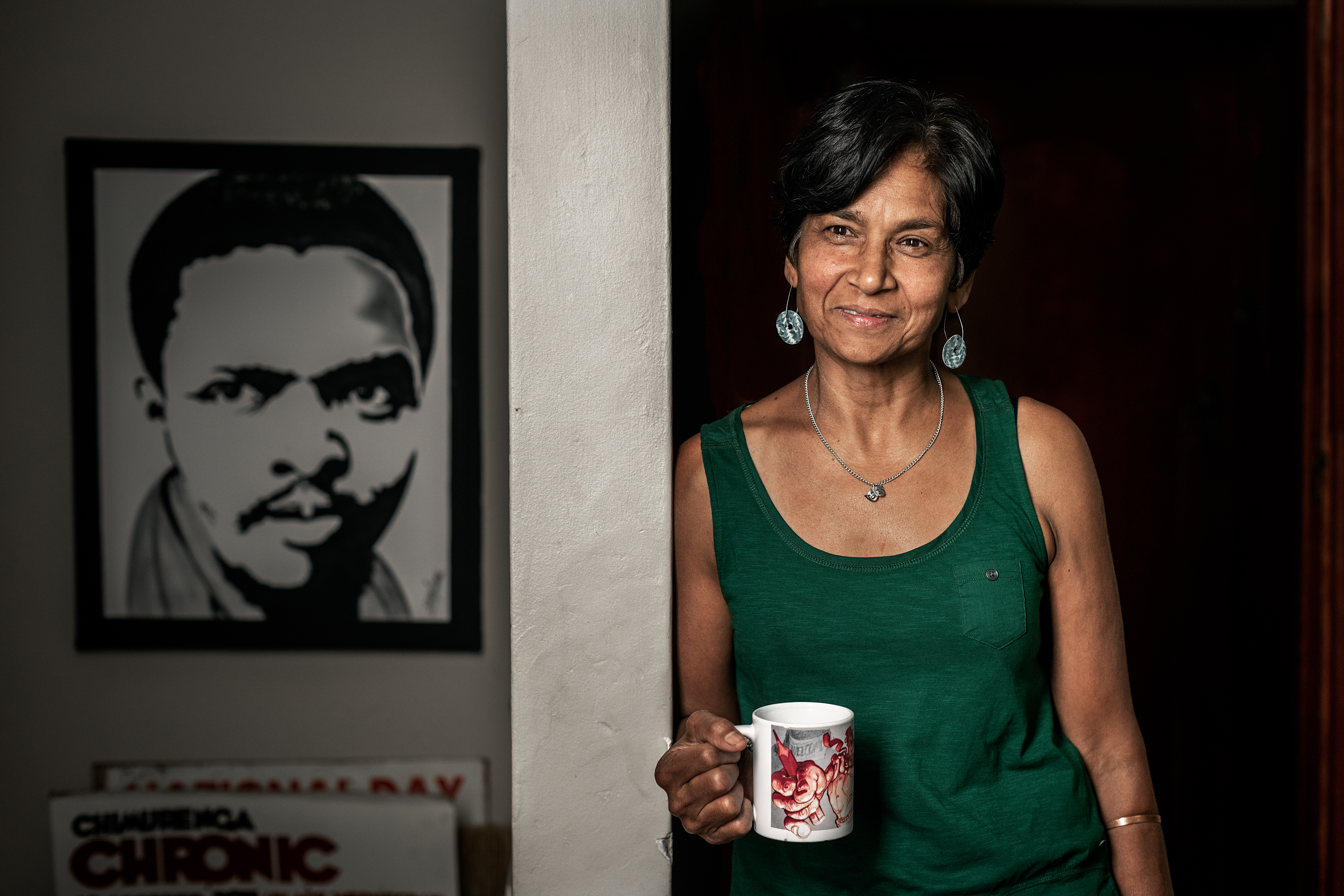 A singular title or position doesn’t cover Sharon Ekambaram’s activism. She can’t help but continue to have many fingers in many pies. There’s a reason: unfinished business.

Red nail polish – that would be Sharon Ekambaram’s kryptonite. Ekambaram is the real-life superhero you’ve probably never heard of because the social justice activist “just gets on with things” – and nail polish would be irksome, as would the label of “superhero”.

It makes collaring the Lawyers for Human Rights (LHR) programme manager for refugees and migrants difficult.

After 1976, a teenaged Ekambaram growing up in Pietermaritzburg says she could not unsee or unfeel the tension and impacts of a repressive government hellbent on entrenching deeper apartheid divides. Schooling was severely disrupted for black children, a tricameral Parliament was coming into being to make racially tiered governance a reality and violence was tearing through homes and communities with rising death tolls.

“Maybe it was just the time I was born in and the deep impact Steve Biko and black consciousness had on my life,” she says.

It was a time of ideas – also for contesting ideas and, as she notes, an absence of the ANC. “We were about building movements and alliances,” she says of the vibrancy and potency of networks that had nothing to do with the ANC directly.

Political life and activism was struggle but it was the antidote for Ekambaram against the “indignity and brutalisation” of the state that made class, race, gender and poverty the markers of who people were.

“We grew up in extreme poverty. My father was a very loving man and worked in a shoe factory while my mother raised five children. My eldest brother never finished school and dropped out to work so we could go to school,” she says.

Her awakened sense of injustice and political activism did, however, mean Ekambaram often butted heads with her conservative, traditional Indian parents.

“My parents were products of entrenched social engineering by a racist state,” she says. Fear and loathing of the other was the conditioned norm.

At one point Ekambaram wanted to move out to live with other like-minded friends. Her mother’s response was: “You will only leave the house in one of two ways: in a coffin or when you are married.”

“It was the traditional thing that I had to learn to make roti and how to take care of my husband and if he left me then it would be because I didn’t do my job properly to keep him happy,” she says.

While finishing her studies through Unisa she became a temporary teacher for children with learning difficulties. It led her to take a position with the South African Committee for Higher Education (Sached), which had been formed in 1959 to plug gaps left by the National Party policy that excluded black students from university education.

Sached covered the regular school curriculum but also incorporated liberation material – with real histories that were excluded from apartheid schoolbooks. She and her colleagues were even able to introduce taboo topics of sex education to school children and were able to mobilise workers through Sached’s adult literacy programme.

In 1990 she moved to Johannesburg, taking a job with the Education Support Project while continuing the underground work of the Marxist Workers Tendency (MWT), including clandestinely printing Congress Militant.

It was around this time that HIV/AIDS started to blip on the radar.

“People were scared and back then we were just going factories and into townships telling people to use condoms and holding education workshops,” she remembers.

Fast-forward to the first days of democracy. Ekambaram says that with the euphoria of a new-born South Africa the HIV/Aids crisis was swept to the side. Then, in 1997 Gugu Dlamini was murdered. The activist was stoned to death for publicly declaring her HIV status.

For Ekambaram it was a period of personal love and loss. “My life was suspended for about a decade because even as I was working and staying involved I was focused on having children.”

But she lost two beloved babies and suffered five miscarriages.

In 1997 her boy Ciaran was born. It would be seven years later that his brother Aidan would greet the world.

The HIV scourge continued and Ekambaram helped found the Treatment Action Campaign (TAC) in 1999, becoming the first provincial coordinator for Gauteng, joining the tireless activists who eventually forced the government to make ARV treatment available to the public.

Later, she became the founding director of the Medicines Sans Frontiers office in South Africa. After four years she stepped down as director and established the Dr Neil Aggett Unit to head up the advocacy work of MSF in South Africa. They named the unit after the 28-year-old physician and trade unionist who died in detention.

“It was honouring his name and legacy as a medical activist. His outrage against racism and oppression, his compassion for humanity and his humility in his struggle for human dignity are the traditions we believed in,” she says.

A singular title or position doesn’t cover Ekambaram’s activism. She can’t help but continue to have many fingers in many pies. There’s a reason: unfinished business.

She says there’s a need for worker-led mobilisation, not through Cosatu, which is “a vehicle for corruption alongside the ANC”. There’s a need for the middle-class to wake up from the slumber of protecting their own interests; for patriarchy to be shaken to its core and for the structures, norms and traditions that disempower women to be dismantled, and there is a need for intergenerational bonds to be strengthened for mobilisation.

“Our tools have become outdated and we need to reconnect to find worker-led solutions because they are the people who have nothing to lose,” she says.

There’s also a need to find our rebel spirit. For Ekambaram though, it’s never left, like the time she and school friends took a key to the bodywork of a teacher’s car. The teacher was known to be an impimpi working for the apartheid government.

“When a repressive system makes you eat shit you can’t sit back and take it.”

Ekambaram has earned the adjectives of fierce, relentless, difficult at times and no-nonsense. She’s also honest about some of her shortcomings and most importantly she hasn’t lost hope.

Ekambaram is big-hearted, and not just for her beloved boys and for animals (she’s been a vegetarian for most of her life) but for the causes she embraces – be they migrants’ rights, workers’ rights or responding to the HIV/Aids burden.

Ekambaram keeps her sense of humour about some things too – even about wearing red nail polish. “It’s still a big question,” she admits, with half a chortle. MC

Coronavirus: Don’t panic – but South Africa needs to be prepared

Explaining the process of a post-Budget submission to Parliament

Biénne Huisman for SPOTLIGHT
Save 5 mins