By Mkhuseli Sizani for GroundUp• 12 February 2020 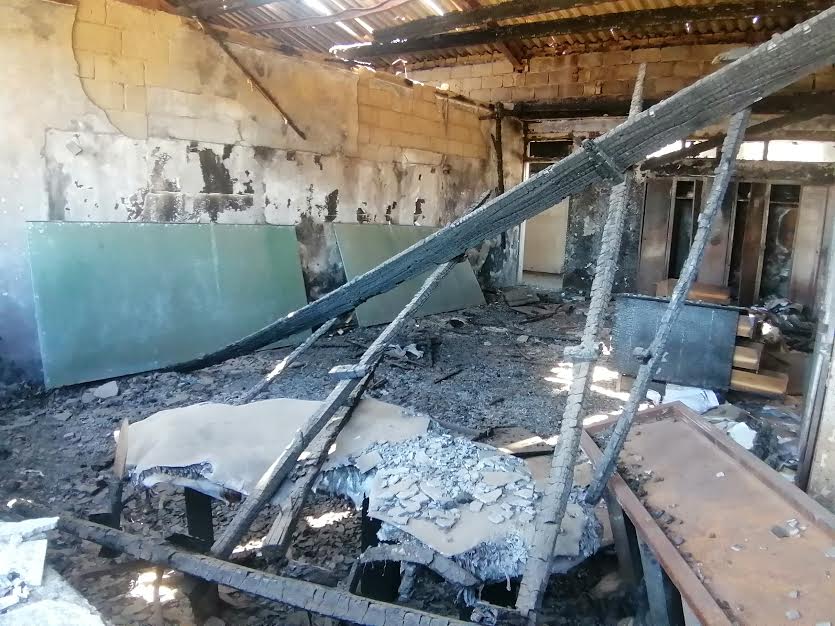 The Reuben Birin School for the Hearing Impaired in Port Elizabeth was gutted by fire in March 2019. Photo: Mkhuseli Sizani

The Eastern Cape Department of Education says children at the Reuben Birin School for the Hearing Impaired in Missionvale, Port Elizabeth, will have to wait until 2023/24 for repairs to their school, which was gutted by fire in March 2019.

The fire destroyed 17 classrooms leaving the learners with no learning space and equipment. The school has 130 learners from Grade R to 12.

Teacher Ntombekhaya Bonga told GroundUp the school was on holiday when the fire occurred last March.

“Twelve classrooms that we were using for teaching and learning, including our Home Economics classroom, which cost about R200,000, were gutted. An additional five classrooms that were used by our neighbouring school Lonwwabo school for the physically challenged were also burnt down. We were about to move into those five classrooms in April because Lonwabo School had moved to Motherwell,” she said. “All our books, chairs, desks, cutlery, cabinets, chalkboards and projector screens were lost in the fire.”

Bonga said the Eastern Cape Department of Education (ECDoE) had provided the school with desks and chairs but learners were being taught in small consulting rooms.

“We are packed like sardines in our classrooms because we have no other alternative. We use the physiotherapist’s rooms for teaching and learning … There is no free movement in the classroom. We use sign language. But the lack of screen projectors makes things difficult. We don’t even have the reading corner to give these learners a chance to read their books. Also there is no boardroom for staff meetings,” she said.

She said the ECDoE had told parents and staff that the fire had occurred when the year’s budget had already been used up.

Parent Nomboniso Mosia, mother of Avuzwa in grade 7, said the children studied in overcrowded classrooms. “Every day I have to wash her uniform because she sometimes sits on the floor,” she said.

Provincial education spokesperson Loyiso Pulumani said the replacement of the classrooms would cost “in the millions” and the department had made it clear “that there are currently no funds available”.

“The Department is currently saddled with 152 ongoing major infrastructure projects that include 51 replacement schools. These projects are projected to be finished in 2022 and will cost R4.5 billion. Any new projects will only be considered in 2023-24,” he said. DM