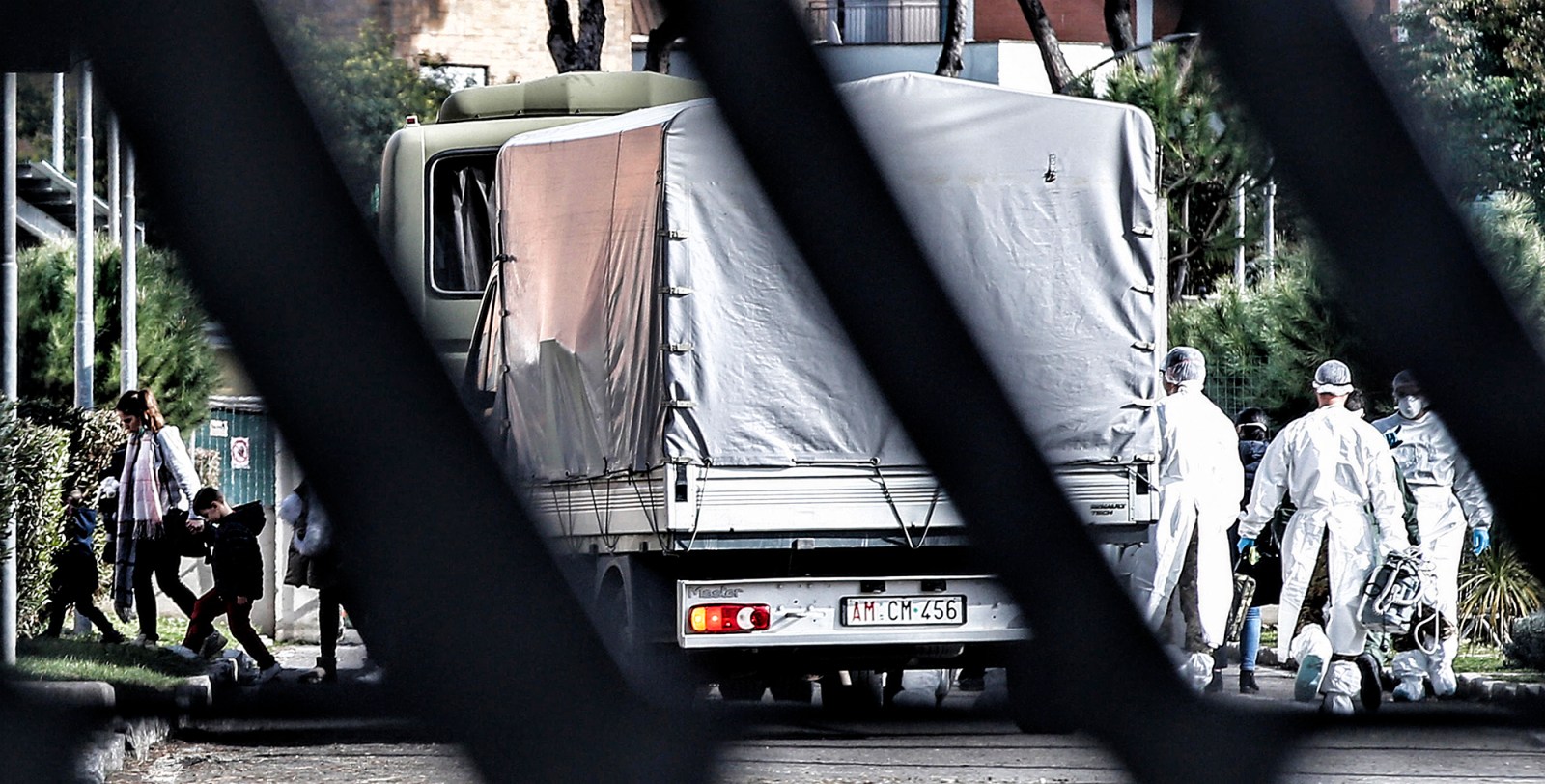 Italians who arrived from China enter at the Olympic Sports Centre of the Italian Army at Cecchignola, Rome, Italy, 03 February 2020. A Boeing KC-767A aircraft of the Italian Air Force brought some 60 Italians who were stranded in Wuhan under quarantine measures to contain the coronavirus to Rome. EPA-EFE/FABIO FRUSTACI

The last thing South Africa needs as it heads into February is to get caught up in the economic ripple effects of China’s coronavirus epidemic. Latest purchasing managers statistics show demand is weaker and the business outlook for the next six months increasingly pessimistic. Add to that a Budget that will be hard-pressed to provide any relief.

As we head into February, the jury is still out on what the economic cost of the coronavirus will be for China, emerging markets and the rest of the world and how far its ripple effects will extend.

What is known is that the appearance of the virus couldn’t have come at a worse time for South Africa. The county is highly dependent on China as an export destination and is also in great need of the rest of the world providing an economic uplift, or at least a steady base because the domestic economy faces so many challenges.

The Absa Purchasing Managers Index, compiled by the Bureau for Economic Research, gave a sneak preview of just how weak South African demand is and how pessimistic the respondents are becoming about business conditions over the next six months.

The index retreated almost two points to 45.2 index points – well below the 50 level that signifies the break-even level between an expanding and contracting economy. Most concerning in the results was the backlog of sales orders, which in January were at their lowest level in more than a decade. Absa pointed out this was another sign of low demand, the others being the still weak business activity and new sales orders indices.

The index tracking expected business conditions in six months’ time slumped to its lowest level in more than a year. Absa put the expectations of dimmer prospects down to the uncertainty about the frequency and severity of future load shedding and the state of the global economy (and thus external demand). It’s of even greater concern that the current responses don’t capture the fallout from the Chinese coronavirus, which only really took hold last week.

With this in mind, February promises to be a particularly difficult month for the country. The impact of China’s reduced demand for South African raw materials will start becoming apparent and it is likely to have a marked impact on our trade account, given that China buys more than half of South Africa’s raw material exports. Fortunately, the latest trade statistics showed a larger trade surplus of R14.8-billion in December than the previous month. However, expectations that this will result in a much healthier current account status may be premature in the short term.

The global oil market was in the grip of a demand shock last week, with China reducing its consumption of oil by three million barrels a day – the largest decline since the 2008 crisis. The oil price slid almost 4% last week to $58 and had come off 16% since China identified the virus. The OECD, already antsy about the state of global demand, is said to be contemplating having an emergency meeting this week to address the added impact of the epidemic on the already sluggish demand for oil.

Economists are reluctant to put a firm figure on the broader economic impact of the unfolding crisis. However, The Wall Street Journal canvassed 10 economists and found on average they forecast Chinese first-quarter growth could come off by more than a percentage point to 4.9%. Goldman Sachs wasn’t quite as pessimistic, predicting that the virus would reduce China’s growth by 0.4 percentage points to 5.5%.

None of this is good news for South Africa during a month when the government will be looking down the barrel of a gun when it delivers its annual Budget on February 26. Last week the IMF, in a reminder of just what is at stake, released the results of its biannual Article IV Report on South Africa following consultations with government and other domestic institutions, including the SA Reserve Bank, in November 2019.

The IMF added that non-resident investors were shedding equities and local currency bonds “but showing an appetite for foreign currency sovereign bonds amid supportive global financing conditions”. It concluded that South Africa’s external position is “moderately weaker” than implied by fundamentals.

The organisation expects South African growth to come in at a paltry 0.4% in 2019, 0.8% in 2020 and 1% in 2021 – and that is based on a scenario that assumes partial reform implementation, better business confidence based on improvements in governance and a limited recovery in investment and consumptions.

The National Treasury responded to the IMF’s assessment by saying it acknowledged “the difficult juncture South Africa is at”. It is marginally more optimistic about the medium-term outlook for GDP growth, expecting growth to reach 1.7% by 2022.

As South Africa faces its own internal headwinds during the month ahead, the extent to which China can limit the impact the coronavirus has on its economy will factor materially in whether the IMF’s modest forecasts prove to be achievable or not. BM