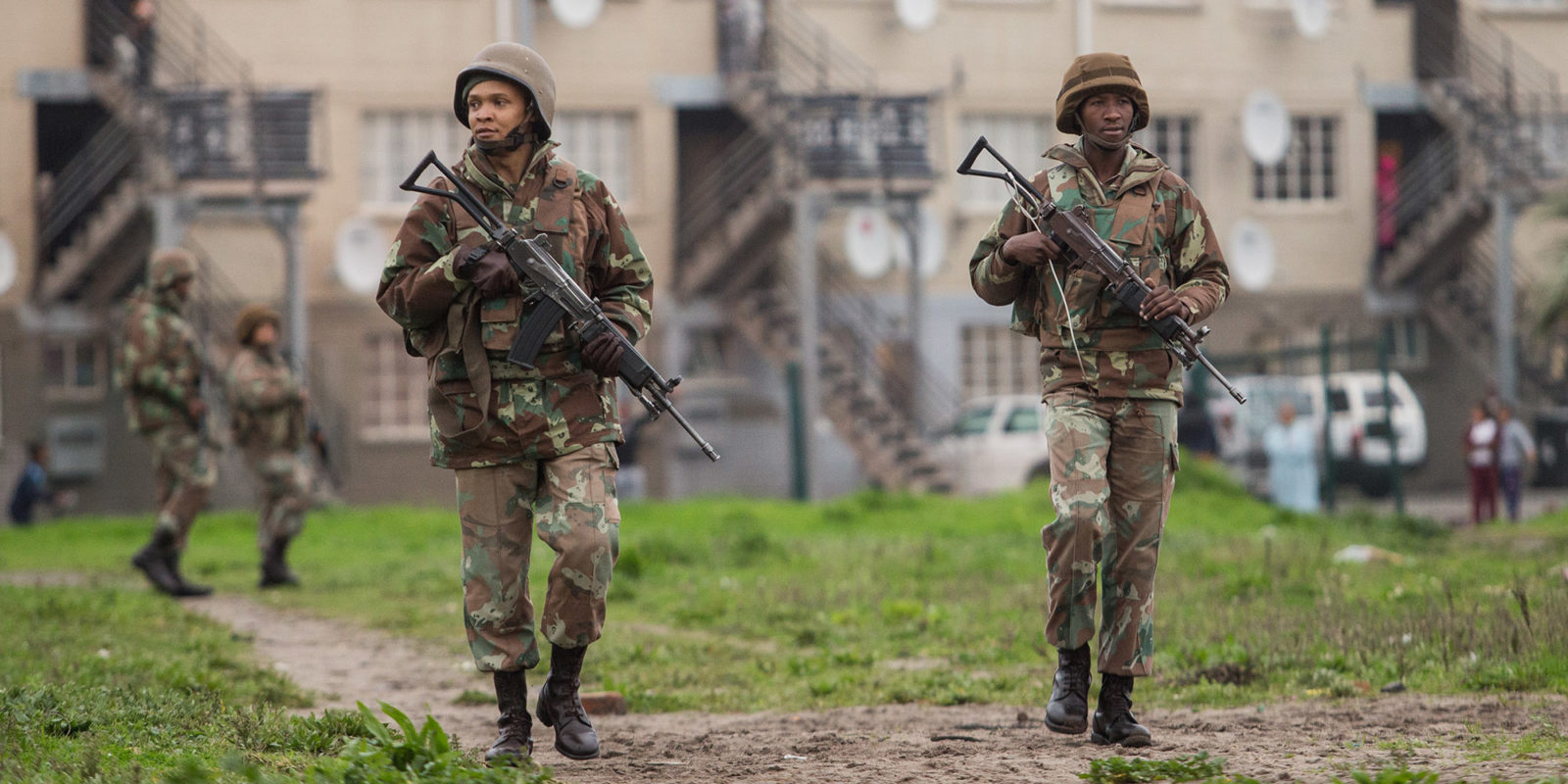 The South African National Defence Force (SANDF) is deployed to assist the police to quell gang violence on the Cape flats in Cape Town, South Africa. Since November 2018, over 2,300 people have been murdered in the Western Cape. (Photo: Ashraf Hendricks/GroundUp)

Perhaps the most pernicious problem in South Africa’s polity is whether the military is an instrument of public policy or of a political party and elite.

During the apartheid era, the “old” South African Defence Force (SADF) was feared by some and hated by many. This reflected its role and, too, its considerable capacity for war-fighting, albeit for a purpose and at a cost that was unconscionable.

The ordering of the SANDF into a democratic context was shaped, too, by the issuing of a Defence White Paper (Defence in a Democracy) in 1996, and a following Defence Review in 1998. The White Paper stresses that “National security shall be sought primarily through efforts to meet the political, economic, social and cultural rights and needs of South Africa’s people, and through efforts to promote and maintain regional security”.

These documents were complemented by the White Papers on Intelligence, and another on South African Participation in International Peace Missions, while a National Security Strategy was adopted by Cabinet in 2013, though this document remains classified secret.

The 1996 White Paper and 1998 Defence Review were instrumental in focusing the direction and emphasis of the South African military in a post-apartheid era. On the back of these documents, the SANDF was re-equipped with advanced weapon systems through a highly controversial $5-billion strategic arms deal concluded in 1999. Perhaps more than the white papers and the review, this provided the clearest indication of long-term government intent with the Defence Force and its budget.

As Corruption Watch has concluded, “the massively flawed arms deal is viewed as having set a regrettable tone for government dealings ever since”. Andrew Feinstein, a former Member of Parliament of the ruling African National Congress (ANC) who was fired in 2001 as the chair of the ANC’s parliamentary public accounts committee because he appealed to government to launch a commission of inquiry into the deal, notes:

“I describe the arms deal and both the corruption in the deal and the efforts to cover up that corruption as being the point at which the ANC lost its moral compass, and I believe that as the years have gone by that contention has only been reinforced.”

Feinstein observes: “We’ve seen a whole range of corruption scandals after the arms deal and I think that the arms deal and the corruption in it, if they hadn’t got away with it we might have had a very different political trajectory in relation to corruption, so I think the arms deal was absolutely critical in determining the moral fibre, if I can call it that, of the current ANC and government, and that it is the point at which we went badly, badly wrong. I think it’s one of the reasons that corruption has become so pervasive in the ANC and in most levels of government.’

As public concern over and thus civil society focus on the Defence Force diminished in the 2000s, there was an attempt to reinstate some serious debate through the reissuing of a Defence Review in 2014. This fresh review, produced after three tortuous years of to-ing and fro-ing, noted that the army was unable to meet standing commitments being “too poorly equipped and funded to execute the widening spectrum of tasks to the desired level”. It warned that “The Defence Force is in a critical state of decline, characterised by: force imbalance between capabilities; block obsolescence and unaffordability of many of its main operating systems; a disproportionate tooth-to-tail ratio; the inability to meet current standing defence commitments; and the lack of critical mobility.”

To counter this decline, the review in effect called for a cash infusion, which would amount to a R80-billion budget in 2019 rands, compared to the current disbursement of R50-billion.

The review remains, however, strategically irrelevant aside from a superficial public relations function, since it has not yet been able to focus the attention of policymakers on the central problem. Instead, it simply instead added more tasks to an already unmanageable SANDF agenda, and fails to address the political impasse underlying the Defence Force’s problems. As such, it offers less of rational analysis and call to political action than a wish-list for new equipment and more funding.

As a result, there remain three essential problems with the SANDF:

The first relates to capacity. Consider some of the following stats about SANDF’s state of readiness.

Of the regular force of 76,000 men and women, some 10% are medically fit enough to be deployable. Given the need for rotation and training, this means about 2,000 are available. Yet South Africa has some 15 companies deployed on its borders, and a requirement for 22. The difference is made up by a force of 20,000 reserves, of which some 15,000 are regularly deployed. With more generals now than during border war years (when the force was, with national servicemen, commandos and citizen force “campers”, twice as large as today), there are critical shortages in doctors, naval engineers, pilots and aircraft technicians.

As a result, just two of 12 C-130 transport aircraft are flying, as are five each of the Gripen fighter-jets (of 26 expensively supplied under the 1999 arms deal) and Hawk trainers (of 24), and less than one third of the 35 Oryx helicopters. The Navy is hardly better off. Just one (of three) German Type 209 submarines is fully operational, and one of the four Meko-class corvettes.

To make up critical skills shortages, the SANDF has imported foreign personnel and services. There are now thousands of Cubans mainly in technical roles, including the management and maintenance of the ground transport fleet. Russia, too, is playing a role, including training pilots, long viewed as a strategic SANDF deficiency.

The issue around force readiness levels demonstrates a deeper issue: the age of personnel. The SANDF has far too many “non-effectives”, and it cannot get rid of those who cannot fight. This is summed up in the average age of personnel which reputedly is 48 and, ideally, should be 20 years younger.

If it to safeguard its own future and stop being a waste of precious resources, which it indubitably is in its current state and structure, the SANDF would have to admit its personnel problems, right-size, professionalise and depoliticise. Of course, any government is fearful of making 50,000 SANDF members redundant, especially when their skill sets are limited and level of politicisation high. Politicians hate hard choices. Yet they should not make the consequences of their failing the responsibility of the military, as a result of which the SANDF has become a welfare and not a warfare agency. It is hunkered down, refusing to engage, coming up instead with possibly well-meaning and certainly fine-sounding but entirely aspirational plans such as the 340-page defence review.

The second problem relates to how the SANDF uses its budget.

One school of thought with the SANDF is that there is insufficient funding to carry out its mandated functions. This argument is often made by those with interests in the defence establishment: serving and old soldiers, militarists, arms dealers, and other fellow travellers. This group routinely points out that the decline in funding which has shrunk by about 5% per annum in real terms over the past two decades to about one percent of GDP, is responsible for a loss of defence capabilities.

There is undoubtedly a budget problem. The defence spending breakdown should, in an ideal world, be 40% (salaries): 30% (capital): 30% (operational). Today in the SANDF it is more like 80:5:15. As a result there is now virtually no money for new equipment and operational expenditure is severely limited.

The budget reflects the health of the South African economy, no doubt. This raises a conundrum for the South African government, as elsewhere in Africa and further afield, whether to attempt to define the role of the SANDF and fund it accordingly; or to carve out an affordable budget and tailor the role around that tranche. This would, in the opinion of some experts, be structured in a “US Marine Corps concept”, that is, with an integrated marine, land and air component, with a relatively heavy investment in technology and special forces. That such debates, which would have been energetic and visibly public in the 1990s, are moribund, reflects badly on civil society, the defence force and the political status quo.

As the circles of debate are kept tight to political insiders only and the spotlight of public scrutiny at best flickering, money is as a consequence used extremely badly, not least on people, but also on new equipment purchases, much of which seems to be motivated less by a concern for defence capability than the need to assuage certain constituencies.

For example, the Badger armoured fighting vehicle replacement for the Ratel under Project Hoefyster, has so far incurred a cost of R7.5-billion (US$500-million) for the delivery of just three prototypes. Yet more than 2,000 of the RG-31 mine-resistant ambush protected (MRAP) vehicle developed and manufactured in South Africa have been supplied to the US armed forces alone, and some 2,700 world-wide, and extensively used in combat environments from Afghanistan to Colombia. In 2009, for example, South Africa exported more than 500 MRAPs to 11 countries. Why South Africa could not utilise this technology, and refurbish surplus US stock for its own use, speaks to a combination of vested interests, blinded political suspicion and delusional intent.

This reflects perhaps the most pernicious problem in South Africa’s polity: whether the military is an instrument of public policy or of a political party and elite? The answer to this may lie in two pieces of legislation promoted by the ANC: the Defence Amendment Bill of April 2017 and the Military Discipline Bill of 2019. The former proposes the following amendment to Section 8 of the 2002 Act: that the Defence Secretariat “… must provide the Chief of the Defence Force” no longer with “comprehensive instructions requiring” but instead only with “specific guidelines in order to enable the Chief of the Defence Force to issue orders and directives and to give commands …”; while the latter transforms military disciplinary issues into criminal acts and subjects civilians to military law.

Neither of these bills, and the frequent extension of the tenure of senior officers, befits a defence force in a parliamentary democracy. Regulating the defence force, and reviewing and moderating its role and aspirations, is, however, the responsibility primarily of democrats. DM

Greg Mills is director of The Brenthurst Foundation. This is an excerpt from ‘The African Security Intersection Pathways to Productive Partnership’.