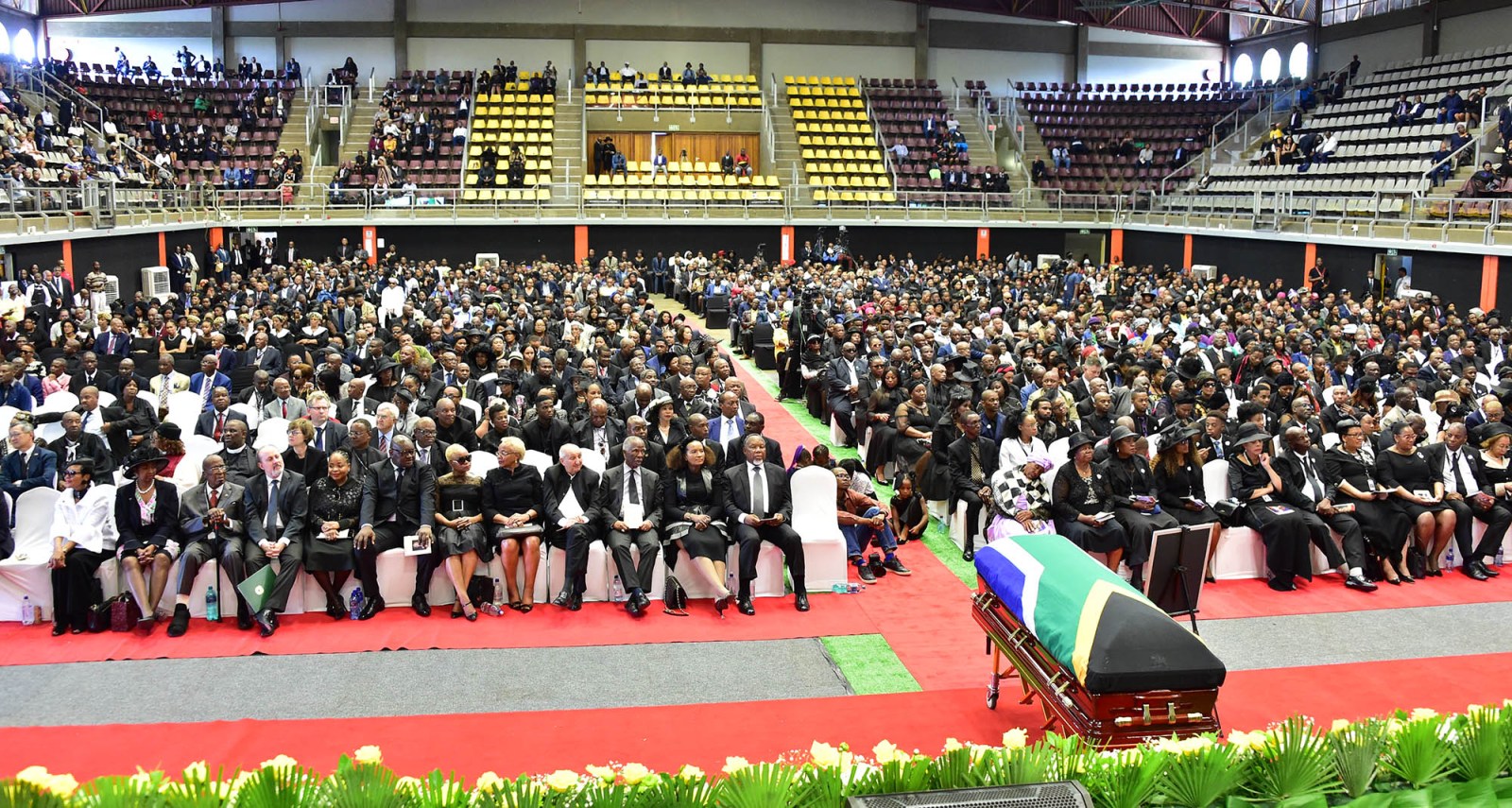 Hundreds gathered at the funeral of Dr Richard Maponya at the University of Johannesburg Soweto Campus on 14 January 2020. (Photo: GCIS / Elmond Jiyane)

Hundreds of mourners gathered at the University of Johannesburg’s Soweto campus to pay their last respects to pioneering businessman Richard Maponya.

This is an extract from When Great Trees Fall, the poem by legendary American poet Maya Angelou. It was located right at the end of the programme for Richard Maponya’s funeral service on Tuesday 14 January; an ode to the legacy the man had carved out for himself.

The business mogul, who died aged 99 on 6 January 2020 after a short illness, was laid to rest at Westpark cemetery, next to his wife, Marina Maponya.

Hundreds gathered at the University of Johannesburg Soweto campus’s Imbizo Hall to pay their final respects to the pioneering giant who carved a path for himself, as well as many others that followed him.

“Fifty years ago, the very idea that a black person could build and own a shopping mall in a black township, where young black men and women could socialise, eat, buy books and watch movies, would have been dismissed as a fantasy,” said President Cyril Ramaphosa in his eulogy at the service.

“And yet, Richard Maponya did it.

“Fifty years ago, if it had been said that a black husband-and-wife team could build a business empire with interests in some of the most important sectors of our economy, it would have been laughed at.

“And yet, Richard and the late Marina Maponya did it.”

Ramaphosa was one of a plethora of dignitaries and family members who graced the Imbizo Hall stage, at the edge of which stood the businessman’s coffin, draped in a South African flag.

The stage was littered with hundreds of flowers, almost an analogy of the now blooming garden of success borne of the seeds that Maponya had, with great difficulty, sown decades ago.

One by one, the likes of Mangosuthu Buthelezi, Sam Motsuenyane and Felicia Mabuza-Suttle took turns sharing anecdotes of how Maponya had impacted on them. Songbirds such as Judith Sephuma and Sibongile Khumalo were there to lend their voices to the celebration of Maponya’s life.

Ordinary South Africans came in their droves as well, seeking to bid farewell to a man of whom Buthelezi said:

“The legacy he created is visible, as one travels through Soweto. The evidence of Dr Maponya’s legacy is not only visible in the buildings and infrastructure, but in the spirit of entrepreneurship which he built.”

A few young and aspiring entrepreneurs voiced their admiration for Maponya and revealed how he had inspired them.

“From the village where he was born, he showed that we can do something as black people, regardless of the background where you’re coming from” 26-year-old Ntshuxeko Mhlongo, who travelled from Bushbuckridge in Mpumalanga to pay his respects, told Daily Maverick.

Dora Lefu, a 27-year-old entrepreneur from the south of Johannesburg told Daily Maverick:

“As a young woman, I’ve learnt that the bottom is not such a scary place to start, because that’s where all the lessons come from, especially seeing as that Dr Richard Maponya came from humble beginnings.”

The colossus, born in the village of Thlabine in Limpopo, was passionate about improving the livelihoods of those residing in townships, which were built as part of apartheid to systematically oppress and control the movements of black people in the country.

But Maponya sought to change the perception that township dwellers had to travel to big cities for work, and instead worked to cultivate and grow the township economies. More especially in Soweto, which he had adopted when he moved from Limpopo.

“He was adamant that economic development begins in communities, and saw the great potential of the township economy,” said Ramaphosa.

Maponya was loved and revered in Soweto. It is there where he built the now-iconic Maponya Mall, and sought to improve the lives of the people living there.

“He was a father figure here in Soweto, he has done so many things for us. He changed the lives of young people here in Soweto by putting them through school, and mentoring them” 66-year-old Diepkloof resident, Busi Dlamini, told Daily Maverick. DM