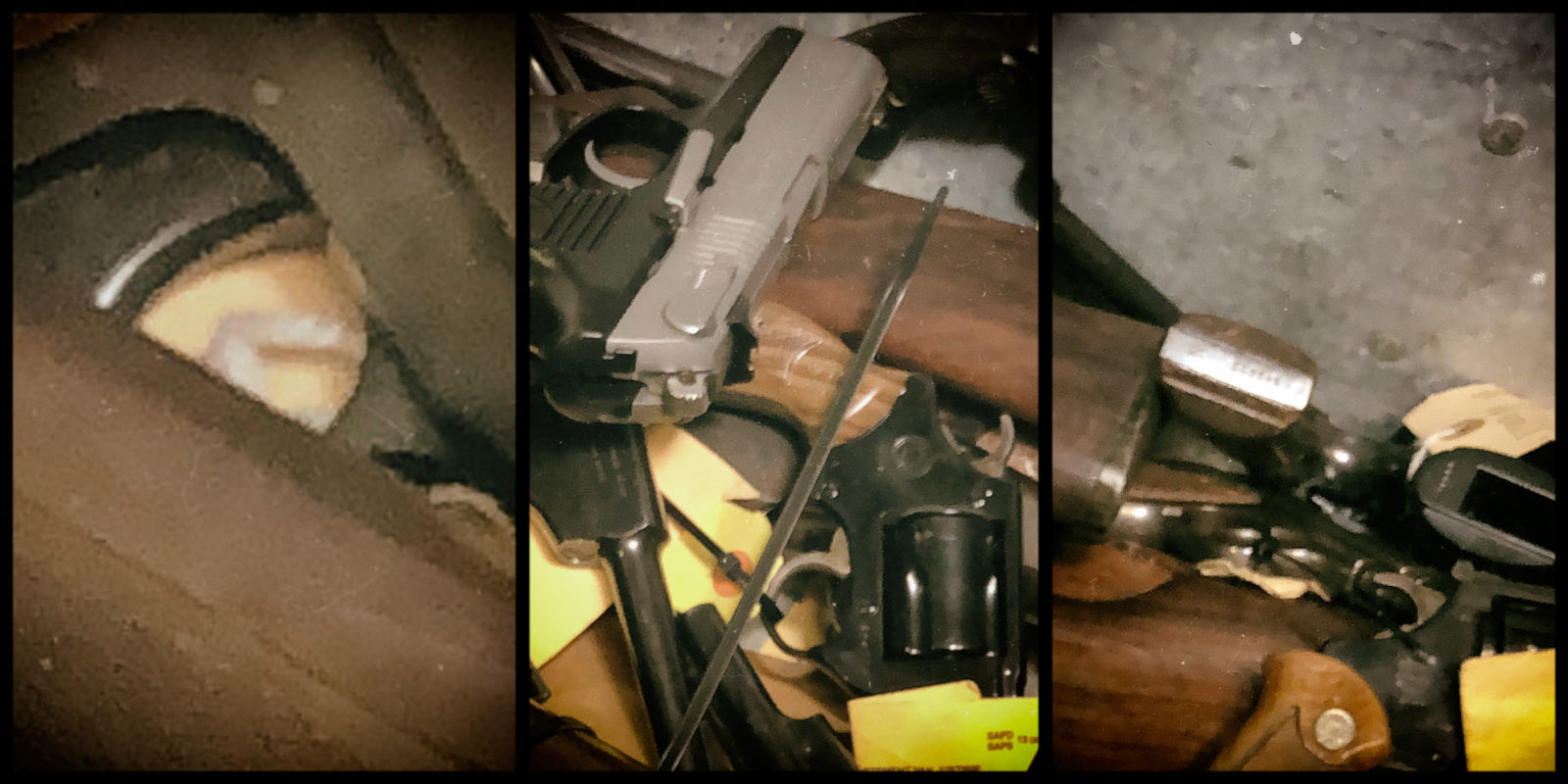 Since 1 December 2019, more than 2,000 firearms were surrendered and the number was growing each day, according to Police Minister Bheki Cele, who claimed success with the firearm amnesty period.

At the briefing, Chris Van den Berg, a Johannesburg arms dealer and member of the Accredited Firearms Training Association (AFTA), surrendered over 200 unwanted firearms and thousands of rounds of ammunition.

Cele said that Van den Berg is one of the thousands of South Africans who had taken full advantage of the amnesty period to discard unwanted or illegal firearms.

Van den Berg handed over his firearms and ammunition as they are outdated and have no more commercial value.

“It’s old-fashioned and deadly. All of them can kill you,” Van den Berg told Daily Maverick, explaining why he surrendered the firearms to police for destruction. The arms were outdated and he would not be able to sell them. “So what am I going to to do with them? Keep it in my shop? No, I need the space.”

As a result of the amnesty period that began on 1 December 2020, the South African Police Services (SAPS) have had a total of 2,266 firearms, as well as 31,382 rounds of ammunition, surrendered to various police stations across South Africa.

“One single bullet has the capacity to kill one human being,” Cele said, “You don’t need two bullets to kill someone, you just need the one.”

Gauteng, Western Cape and KwaZulu-Natal had surrendered the most firearms in the 50 days since the amnesty period began.

The firearm amnesty period commenced on 1 December 2019 after the declaration was signed in August 2019 and then published at the end of November 2019. The firearm amnesty came after crime statistics 2018/2019 revealed that firearms were the cause of most of the serious crimes in the country, such as murder or attempted murder.

“Firearms are the instruments commonly used in the commission of crime, especially violent crimes,” Cele told the National Press Club in Pretoria in November 2019.

“They are the biggest drivers of crime and murder on South African streets.”

Gun violence is a scourge in South Africa, as reported in the media, with two separate incidents occurring on New Year’s Day in Johannesburg. In Melville, two women were shot dead at Poppy’s restaurant and six were wounded. News24 reported a second incident that occurred later that day when 11 people were shot and wounded in Mary Fitzgerald Square in Newtown.

The gazetted notice of the firearm amnesty stated that the owner of the unwanted or illegal firearm would have to take their firearms and ammunition to their closest police station and then from there a team would conduct ballistic testing to ensure that the surrendered firearm was not used in any crime.

“This amnesty creates an opportunity for members of the public to surrender illegally possessed or unwanted firearms, ammunition and/or firearm parts to the South African Police Service without fear of being prosecuted for the unlawful possession,” Cele said in November. according to IOL.

“But it is important to note that during this amnesty period, there will be NO indemnity for firearms handed over which have been used to commit crime.”

The amnesty period ends in May 2020 which, in Cele’s view, is sufficient time for South Africans to hand over their firearms.

“When the Amnesty period lapses in May,” Cele said, “rest assured the law will be tough on those who persist on carrying guns that are not licensed.”

“People misunderstand who (the) criminals are,” Van den Berg said. “If you are in possession of a firearm and don’t have a licence, you are a criminal.” DM