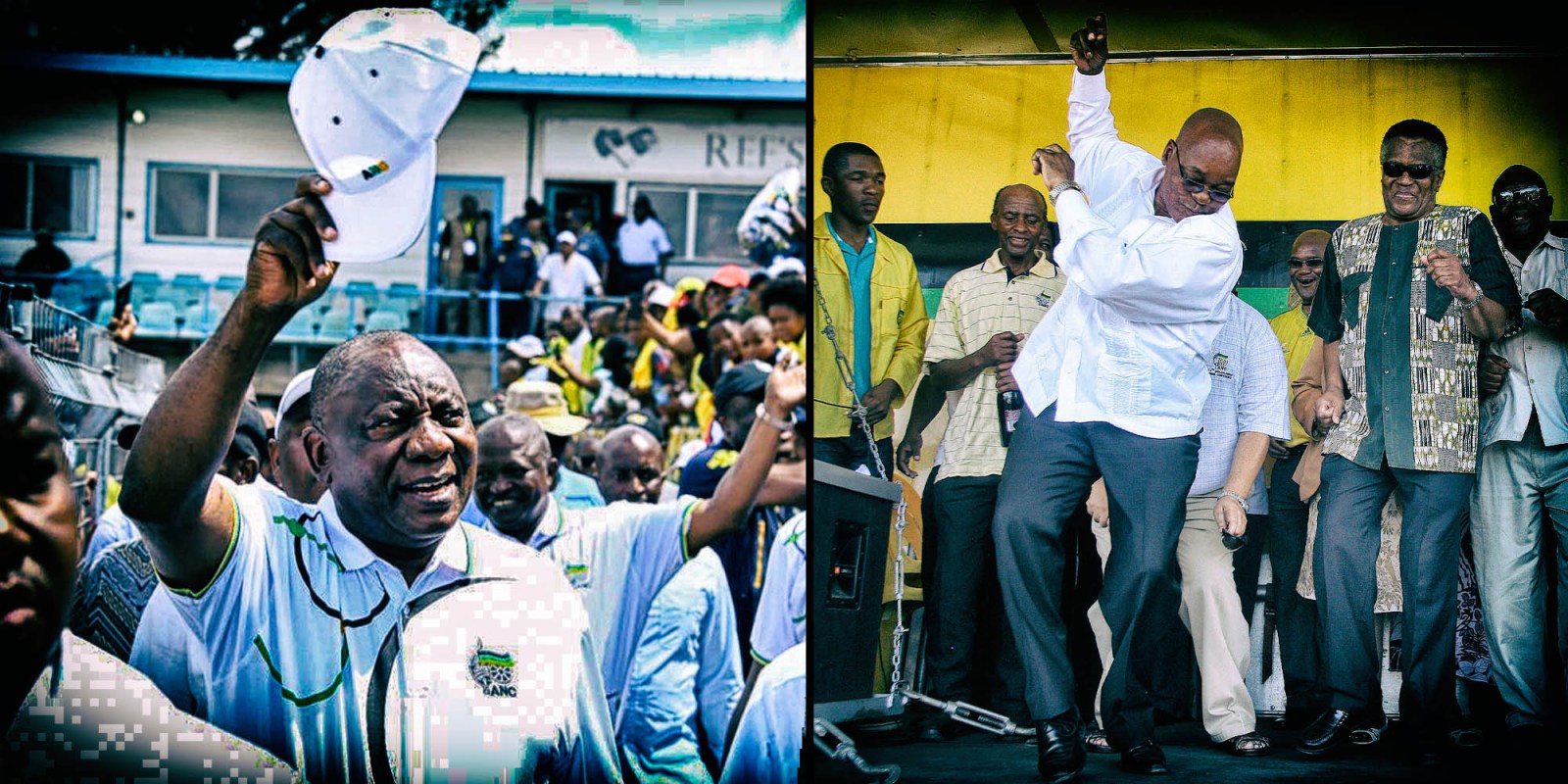 Ten years ago, almost to this day, former president Jacob Zuma delivered the ANC’s January 8 birthday statement in Kimberley. This weekend his successor, Cyril Ramaphosa, showed up in the same town for the same purpose, but much has changed.

Only days before former president Jacob Zuma declared 2010 the ANC’s year of “working together to speed up effective service to the people” at the party’s 8th January birthday celebrations in Galeshewe, Kimberley, he married his third wife. A month later, he apologised to the nation for fathering a child with girlfriend Sonono Khoza. For the first time, his loyalists in the party wavered, but two years later in Mangaung he was elected for another term in a landslide. Only in 2018 was his power cut short after his personal relationship – this time with monetary benefits – with the Gupta brothers irked the party faithful.

“This January could be the end of Cyril,” the headline to Makhanda ka Lima’s analysis in the Mail & Guardian read. Doom is fashionable in the media’s echo chambers these days, but it’s also true that Ramaphosa’s position isn’t as secure as Zuma’s was two years into his leadership. Even Ramaphosa’s top six isn’t wholly behind him, though Zuma did have the advantage that many of his detractors left the ANC to form Cope.

Zuma’s loyalty was very much to the ANC first. In his 8th January address – the written version, at over 8,000 words, was roughly twice as long as Ramaphosa’s speech on Saturday – the most-used word by far was “ANC”. It topped the list with almost 90 mentions, followed by “people”, with 43 mentions, and then “government”, “work” and “South Africa” or “South African”.

Ramaphosa, similarly, prioritised the ANC, using the word 35 times, but he used the word “people” (31 mentions) and “South Africa/n” (30 mentions) with almost equal frequency, followed by “work” and “government”.

While Zuma in 2010 addressed an ANC that still had a firm grip on eight out of the nine metros and an almost two-thirds majority at the ballot box (65.9% in the 2009 general elections), Ramaphosa’s ANC had dropped below the psychologically significant mark of 60% (to 57.5%) and had a confident grip only on five metros. Zuma’s focus within the ANC was to make it bigger and get the membership to a million by its 2012 centenary – and the party subsequently did hit that target – while Ramaphosa at Friday night’s gala dinner spoke about “repositioning” the party. On Saturday, he said, “In the year ahead, we must make irreversible progress in building a united, ethical and strong ANC that is able to effectively serve the people of South Africa”.

African heads of state never featured at ANC birthday rallies led by Zuma. In 2018, Ramaphosa invited Kenyan President Uhuru Kenyatta, who served the double purpose of keeping Zuma, who was then still the country’s president for another month, preoccupied. This year, Ethiopian Prime Minister Abiy Ahmed came to Kimberley, as he was in South Africa for an official visit. He might have exchanged some notes with Ramaphosa about peace-making and elections. Ramaphosa will step up as African Union chair at the body’s summit in Addis Ababa next month, with the theme for this year being about silencing the guns. Abiy has successfully defused his country’s 20-year-long war with Eritrea.

Ramaphosa and Abiy both came to power at the start of 2018 without having contested a national election and the citizens in their respective countries are slightly less euphoric about them than in those early days. Ethiopia’s elections are due in May, while South Africa’s was a year earlier. Social cohesion is a problem for both leaders, although Ramaphosa must surely be envious of Ethiopia’s economic growth, which has been at nearly 8%.

In contrast, Ramaphosa has to fight against a further decline in South Africa by shoring up confidence in the embattled energy utility. He told the crowds: “Eskom will be restored to becoming a company that can provide energy. And I want to stress once again, those who think they want to privatise Eskom, I want to say to you, we are not going to privatise Eskom, we are going to strengthen Eskom, so that it can deliver energy as it should.” A rare cheer went up from the crowd.

Zuma didn’t really mention “load shedding” in his speech a decade ago, although power cuts by then were an issue since late 2007. He promised that, “issues of our energy mix, environmental sustainability, distribution mechanisms, surcharges by local municipalities and the role of private producers” would be addressed “urgently”. A decade later, these wouldn’t have been out of place in Ramaphosa’s speech.

Both Zuma and Ramaphosa in their speeches promised to tackle corruption – in 2010 we didn’t use the term “state capture” yet – and strengthen governance, also on a local level. They addressed issues of poverty, education, jobs and the implementation of the National Health Insurance (yes, it’s been in the pipeline a while). Ramaphosa talked about fighting the scourge of gender-based violence, giving effect to the constitutional right of equality for “members of the LGBTQI plus community”, and social cohesion. He threw in words from most of South Africa’s 11 official languages. There was none of these in Zuma’s speech, but he did urge South Africans to “emerge from the [football] World Cup more united as a nation and as a continent, having changed the opinions of the world about our capacity and humanity”.

Neither 2010 nor 2020 are election years, but equally important for ANC leaders, both feature gatherings of the party’s national general council – a stocktaking gathering midway between conferences. In 2010, the ANC Youth League indirectly attacked Zuma’s leadership and forcefully demanded that the ANC adopt the nationalisation of mines as policy. This year, there’s talk about a possible onslaught against Ramaphosa, using the, at times ambiguous, but still weaponised, resolutions of the party’s 2017 conference in Nasrec. The expropriation of land without compensation is key among these. During Friday’s gala dinner, Ramaphosa promised that the party would go ahead with land expropriation without compensation, and on Saturday, he urged “all ANC structures and all South Africans to have their say on the proposed amendments to section 25 of the Constitution on the issue of land expropriation without compensation”.

Ramaphosa’s style is rather more pedestrian than the drama and dance of the Zuma years. Business Day’s Carol Paton noted this week that government’s policy wheels have started turning again. This year, for the first time, Zuma was absent from the ANC’s birthday celebration, citing poor health. His son, Duduzane, was very much present and trending, despite standing knee-deep in state capture allegations. It served as a small reminder of some of the more tricky issues Ramaphosa will have to deal with this year. DM