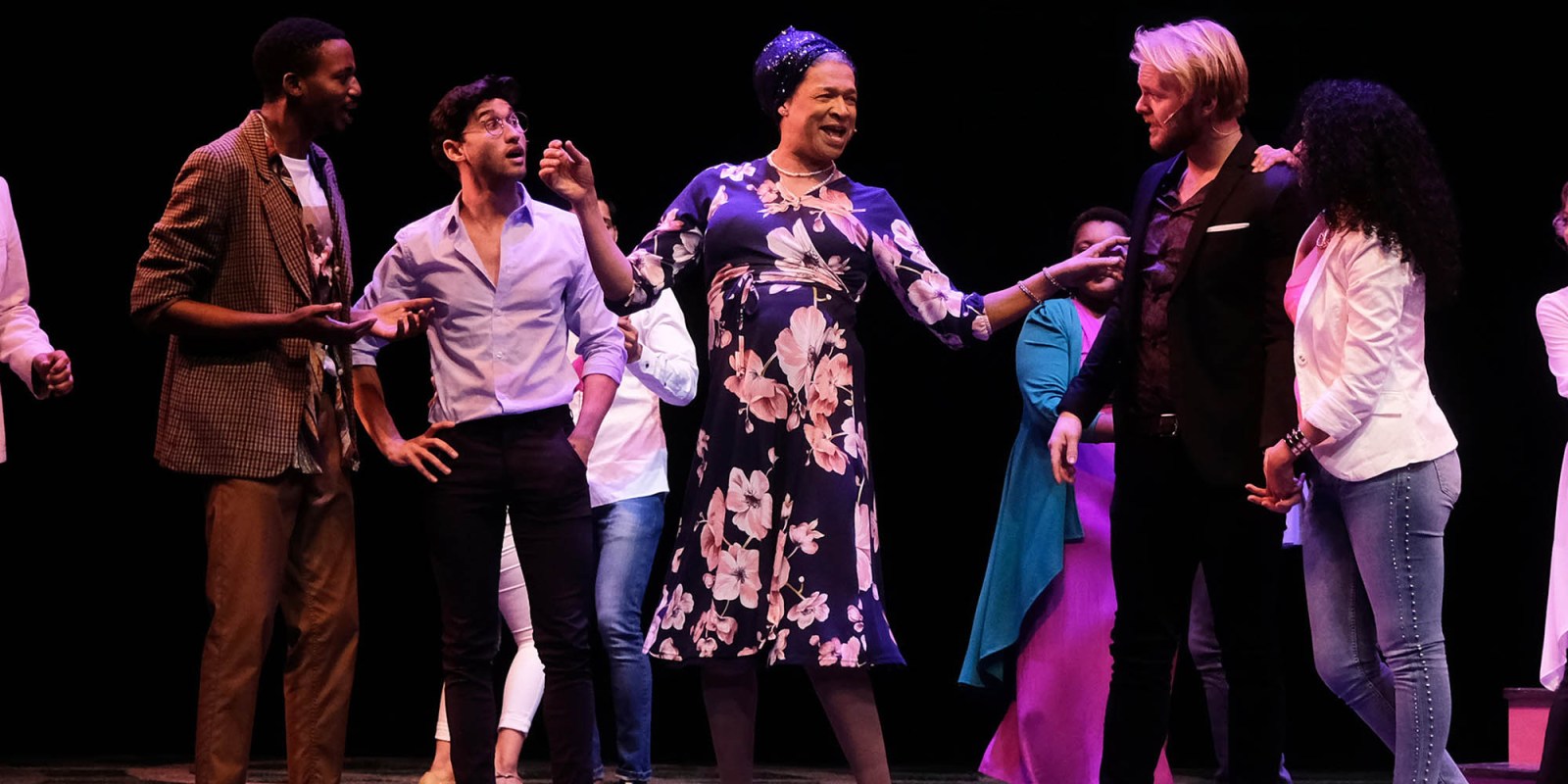 Beneath the chaos of everyday local and global politics, ordinary people get on with their lives. It is in this intimate domestic realm that Marc Lottering finds the humour and tensions that make South Africans who they are. His new musical slots comfortably into the #strongertogether movement and is a delight.

Disclaimer: The writer and Marc Lottering have a long association dating back to 1997 and the artist’s first show, After the Beep, a production for which this writer dressed the artist in a black T-shirt and camouflage tights. The author also admits to writing a glowing review afterwards.

It’s tough being a European at the moment – or an American, or Brazilian or a Zimbabwean for that matter. Actually, it’s tough being alive anywhere in the world at present.

It took my two European companions (they’re Belgians, but identify as Europeans) who accompanied me to the rousing opening night at the Baxter Theatre of Marc Lottering’s Aunty Merle, It’s a Girl! to remind me of just how unique and precious the production is.

You would not, they informed me (and one of the Belgians is one of the most-celebrated playwrights and authors in Europe and beyond) see on a European stage (or a stage anywhere else, come to think of it) such a diverse community of characters all interacting in the same theatrical universe.

Her best friend is her Muslim neighbour Soraya (Carmen Maarman), her one son-in-law, Alan (Julian Place), is white, as are her in-laws Claire and David (Jennifer Steyn and Nicky Rebello).

Without giving away too much, Aunty Merle’s life is about to be catapulted into 21st Century contemporary South Africa in this sequel to Lottering’s first offering, Aunty Merle The Musical. Enter Mandisa Gumede (Zoleka Hlelesi) and her son Siya (Sizwesandile Nnisi) who are about to join the Abrahams’ travelling circus.

Lottering has written the original book and composed the score for this sequel while direction is by Lara Foot, musical direction by Trevino Isaacs and choreography by Grant van Ster. A cast of no less than 14 accomplished musicians, dancers and actors lift it all to deliciously entertaining heights.

The magic of Marc Lottering, and particularly in embodying the character of Aunty Merle, is that he has accomplished something quite unique – both inhabiting Merle Abrahams and Marc Lottering at the same time.

Lottering accomplishes this with astute subtlety. Look at Aunty Merle’s knee-highs, her animated gestures, voice drops and silly walks and you get that this is Lottering winking at the audience?

“You know I am not really Aunty Merle hey?” he seems to be asking but at the same time nudging you to believe, love and know her anyway.

In being present but absent, Lottering has also created space – unusually for a musical – to inject the type of everyday banter, including topical political and social issues, he can perform as a comedian.

It is particularly when Merle and Soraya socialise, be it on a park bench or in Merle’s lounge, that Lottering with Maarmen as a perfect foil, is able to allow his imagination to fly. There is great improvisational jazz to Lottering’s humour (but make no mistake, it is not improvised) which is unleashed full throttle in these scenes and that is hilarious.

But between the silly walks, dances and humour Lottering has centred acceptance and love as the centrifugal force that drives the show.

This is a mammoth, collaborative labour of love from all involved considering the 18 original songs that play out in two acts, the musical arrangements, the choreography, the acting and drama and the versatile set and lighting design by Patrick Curtis and Mannie Manim.

In a world filled with divisive rhetoric and anger Aunty Merle, It’s A Girl! reminds us that away from the screaming headlines of woe are the lives of ordinary people, our resilience and our ongoing journey towards self-healing and hope. DM