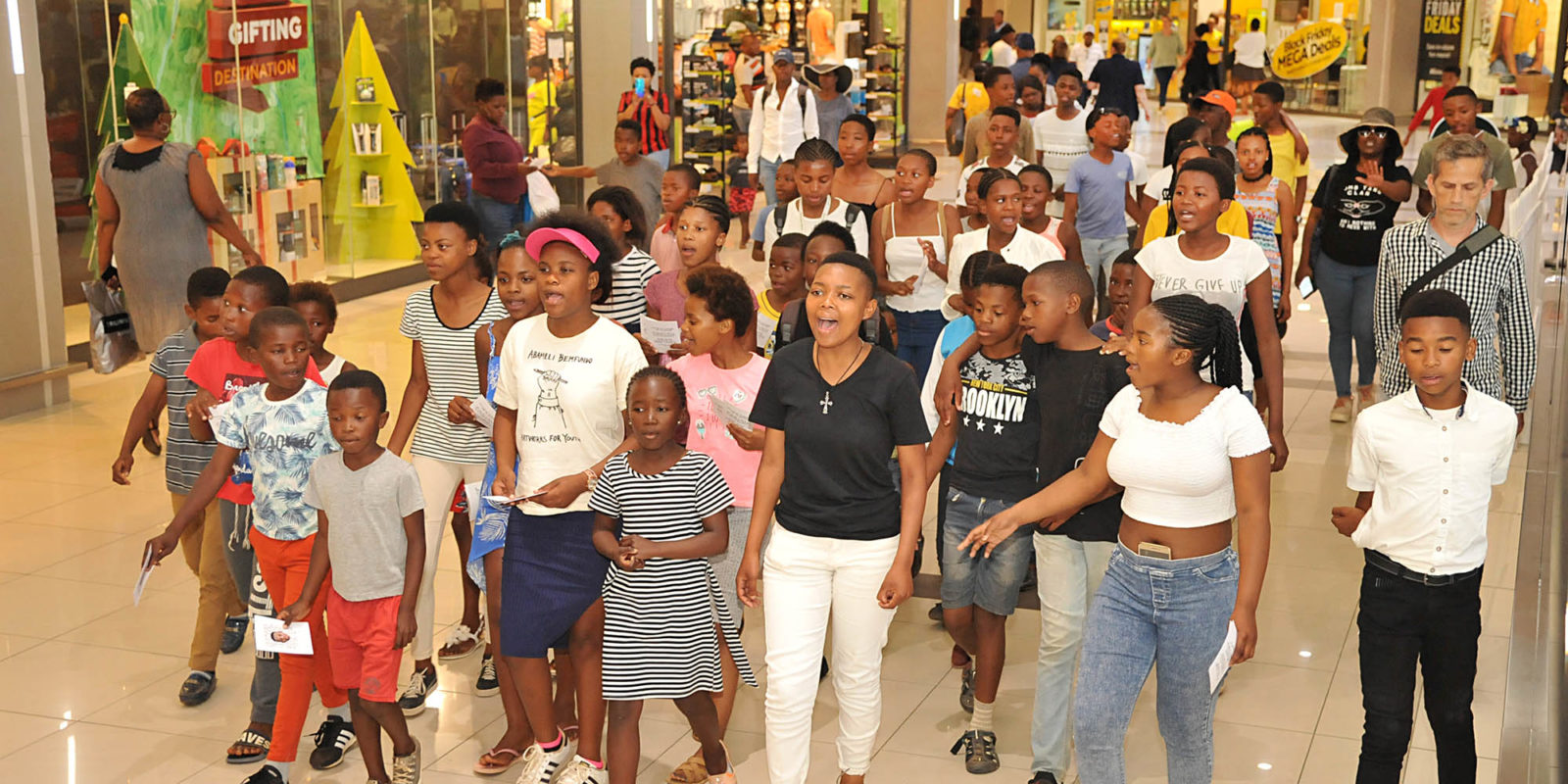 The learners who will be walking 260 km to the head office of the Eastern Cape Department of Education on Tuesday held a flash mob at Greenacres Shopping Centre to draw attention to their plight. (Photo: Mike Holmes)

Teachers and schoolchildren representing 14 no-fee schools in the Nelson Mandela Bay metro will on Wednesday 27 November 2019 make an early start to a 260km walk from Port Elizabeth to the headquarters of the Eastern Cape Department of Education in Zwelitsha, King William’s Town. Their goal is to protest against the lack of quality teaching in township schools. In a series of heartbreaking essays published to support their cause, the learners spelled out why they are feeling frustrated and depressed.

They named their walk Siya Kwisebe Lezemfundo. “It means walk for education. It is simple and to the point,” organiser and director of  New York-based ArtWorks for Youth John Lombardo said. Lombardo has been dedicating his time and talent to teaching children art in the townships of Port Elizabeth for the past two decades.

It was here that he got first-hand knowledge of the shocking decline of education standards each year.

“A few years ago we had a funeral for formal education, but nothing we do seems to stop the decline,” he said. “The children are frustrated and they are getting depressed because they really want to learn, but they are not given a chance,” Lombardo said.

He asked the children to write essays describing the state of education in their schools and express their frustrations. What he got back was heartbreaking. He said they identify children by their first names only and do not mention the names of their schools to prevent victimisation.

“We fear, though, that there will be retribution against some of them,” Lombardo said.

“I am so tired of being beaten by teachers and for paying a teacher when I don’t do my work.” He said his teachers made fun of them and spoke about their parents in a way “that is not nice”.

“We want a better chance at going to college,” he said. “I want to be heard so that things I am unhappy about can change.”

Vuyisenani wrote that he was walking because he wanted the “free quality education” that the government promised.

“Our teachers do not teach and the department is doing nothing about it,” he wrote. “I am tired of kneeling on the floor as a punishment. I have not had a technology teacher this entire year, but soon I will be taking an exam in technology.”

Sivenathi wrote that she wanted teachers to be present and give learners “a decent shot at finishing school”.

“We do not have enough textbooks,” she wrote. “Our school grounds are unsafe.”

“I hate that our teachers are not committed to us,” she wrote. “They do not teach. They do not care about us. Our toilets at school are terrible. We have a shortage of textbooks. When we ask about it, they tell us to take notes. The only time our teachers teach is when they know someone from the department is coming to inspect the school,” she wrote.

“We want the department to send more monitors. That is the only time that they are committed.

“In my school, teachers only want to focus on the matrics. They don’t care about the rest of us.

Sivenathi and Sesethu want to become engineers and they feel frustrated that their lack of education might stand in their way of getting to university.

“I also want to walk for my cousin who is going to high school next year,” Sesethu said. “Maybe he can have a better experience. I want to go see the department to tell them that we are suffering and that nothing ever changes,” she said.

Alwaba, who is in Grade 10, said he was sick and tired of “teachers who do not teach”.

“I deserve the best education, but what I am getting is the worst of the worst,” he said. “I have been enduring this for a long time and I have had enough.

“I am not getting enough education because our teachers do not come to class enough. When they do come they do not teach. They are on their phones or they talk to other teachers. I am doing all I am asked to do, but I am not asked to do very much.

Asathule wrote in her essay:

“I have changed schools so many times looking for a better education, but have still not found it. Students living in townships do not get the same education as those who have money to pay for it. She writes how parents who complain are seen as uneducated and told that they “do not understand” how things work.

“You would be shocked to see the way some of our teachers treat us,” Iminathi wrote. “I am hit and cursed at. There are many times that we do not have teachers.”

“I am not only walking for myself, but for the others I am leaving behind as the victims of South Africa’s mediocre education system,” Qhamokuhle wrote. “For 12 years I have tried to make a change. But I was not recognised. I am walking for the next generation of students… who are somehow made to feel that they are getting what they deserve.”

“I am tired of our teachers cursing at us. There is also bullying at school and nothing is done about it. Teachers are not always in class because they have other things to do. They want us to respect them, but they do not respect us… I want to be a pilot, but I wonder if I will even make it to college with the little support I am getting in Grade 8.”

Tenashe wrote that she had been to three schools in two years looking for a better education.

“My mom does not have money for a better school. So we do not have a choice, but to hope for things to get better.

Their complaints to this point have gone unheard. Their list of demands is simple:

The learners organised a flash mob at one of Port Elizabeth’s biggest shopping malls, Greenacres Shopping Centre, on the afternoon of Tuesday 26 November to launch their walk and hand out pamphlets explaining their mission.

Eastern Cape Education Department spokesman Malibongwe Mtima did not respond to a request for comment. MC