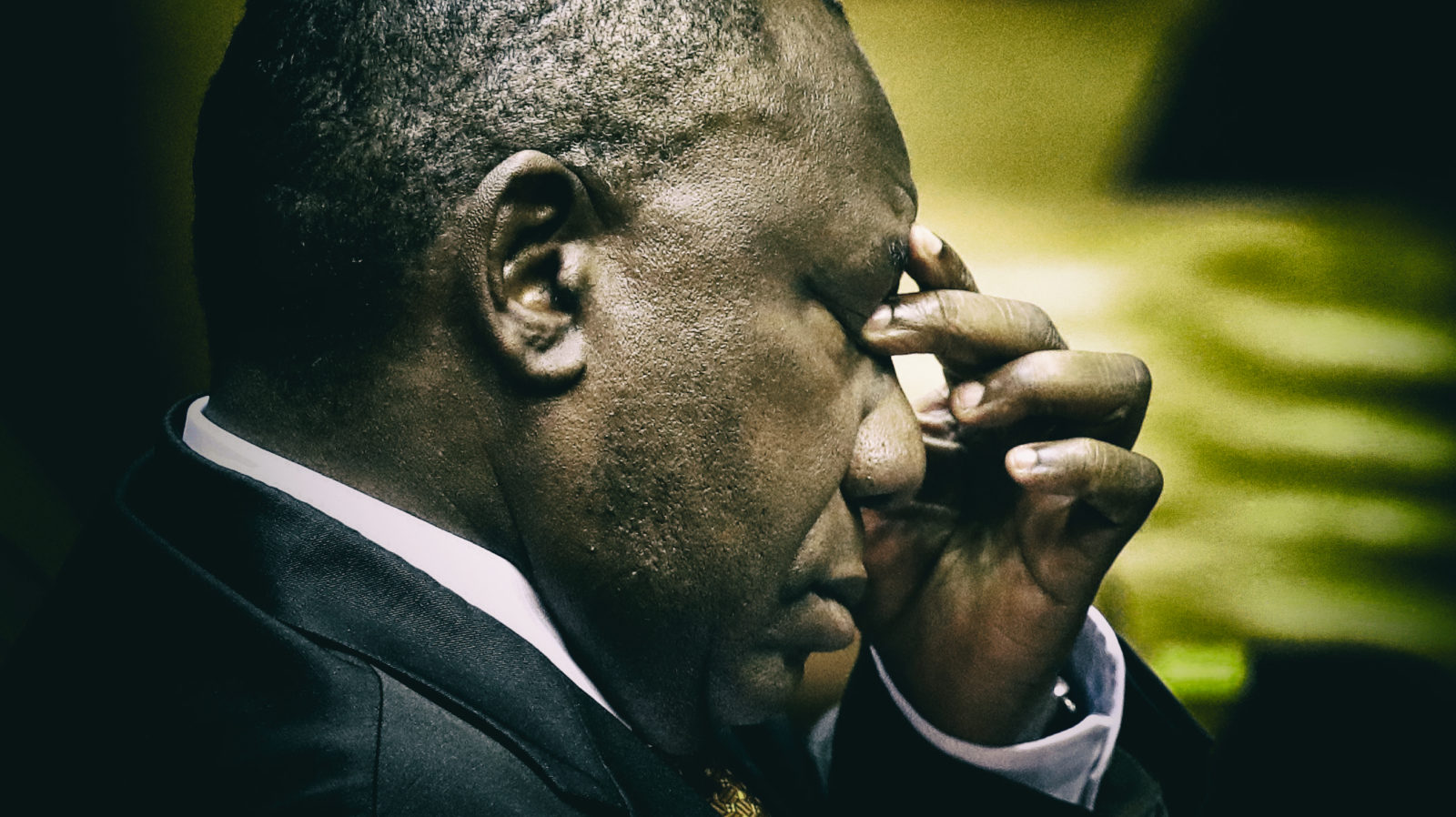 Dissatisfied ANC members are rattling their sabres at President Cyril Ramaphosa and his allies in the ruling party, with dramatic developments at last week’s caucus, the first real battle in a war which will culminate in a bitterly divisive ANC National General Council by the middle of 2020.

Daily Maverick reported last week that allies of Ramaphosa were very worried in the run-up to the weekly caucus meeting, at which Minister of Public Enterprises Pravin Gordhan was summoned by dissatisfied ANC MPs to explain and defend his policies on the future of South African Airways.

Sources say core Ramaphosa supporters were in fact so concerned about the situation that Mineral Resources and Energy Minister and ANC national chairperson Gwede Mantashe, surely the most popular member of the ANC Top Six leadership among rank and file party members, was sent in to bat for Gordhan by co-answering caucus questions from MPs with Gordhan. Mantashe is a strong and reliable Ramaphosa ally.

Addressing the caucus behind closed doors last Thursday, Mantashe and Gordhan again explained the facts, figures, thought processes, options and policies which they, together with Ramaphosa and Finance Minister Tito Mboweni, have been propagating publicly very widely of late.

Several ANC backbenchers made their dissatisfaction and disagreement with the input and explanations of the two ministers abundantly clear. The rebellious mood was particularly prevalent among many younger ANC MPs who are new arrivals in Parliament, having been elected for the first time in the 2019 general election. Mantashe and Gordhan were met by an avalanche of critical questions once they had concluded their initial input.

First, dissatisfied MPs stated that Cabinet members tended to send mixed and sometimes contradictory policy signals on important matters. Mantashe denied this, stating that where Cabinet members did not repeat the exact same input on a specific matter, their inputs could safely be interpreted as being complementary – facing different aspects of Cabinet decisions on policy.

Although sources differ on whether they were raised pertinently in caucus, it is common cause that those making this claim tend to specifically raise two examples as proof of the perceived unwillingness by the ANC powers-that-be to implement radical conference policy instructions. These examples are changing section 25 of the Constitution to simplify expropriation of land and property without compensation, and nationalising the Reserve Bank. Rebellious ANC MPs critical of Ramaphosa and his loyalists claim Cabinet takes its lead from what the international banks want, what the rating agencies want, what the US wants and what Europe wants, but does not take its lead from the ANC to which they all belong and whose decisions they are bound to implement.

Mantashe pointed out that ANC conferences take place only every five years. During the five years between conferences, the world changes – it does not wait five years for dramatic changes to happen, new opportunities to develop and new dangers to the economy and the country to form. In such ever-changing circumstances, Cabinet must govern the country to the best of its ability, which requires constant adaptation of policy. Often, decisions to change policy must be taken rapidly, and always in the national interest.

Mantashe again listed cold facts and figures to try to make the rebellious grouping realise how dire South Africa’s economic position is, and how few viable options remain. He explained that the country simply does not have enough money to grant another R2-billion SAA bailout (many of the dissatisfied MPs insist the bailout must go ahead regardless).

Another issue raised in caucus by dissatisfied ANC MPs is the imminent partial or complete privatisation of SAA, which they believe to be anathema to the ANC conference decision against privatising state assets. Mantashe explained that the sad but undeniable fact is that the state has run out of money – its money is now finished – and there really is no other option than “seeking private/commercial partners”. (Ramaphosa’s critics claim with some cause that those are just weasel words for privatisation, and a figleaf for betraying ANC policy.)

Mantashe and Gordhan proceeded to explain the realities of the current situation – just how close South Africa is to the disaster of being downgraded to full junk status if Moody’s, the only major ratings agency yet to do so, joins the other major ratings agencies’ assessment of South Africa as junk when their next sovereign rating is issued at the end of February 2020.

That could trigger several disastrous consequences for the South African economy as well as for the relative wealth levels of every single South African. International banks may well consequentially decide to call in South African debt. South Africa is currently not able to settle its debts and would have to default, causing extensive further damage to its ailing economy and increasing poverty levels.

Fourth, some caucus members criticised the fact that Eskom now has a white man in charge. In response, Mantashe pointed out that the past 10 Eskom CEOs had been black, but that none of them could fix the power utility, and that all of them left as soon as the going got tough. He stated very plainly that the smearing of Gordhan – including by some in the ANC – as someone who only appoints white and Indian South Africans to positions of power was thus demonstrably a lie.

He furthermore reminded caucus that the ANC is supposed to be a non-racial organisation which believes that South Africa belongs to all who live in it, black and white. It follows that all South Africans should be allowed to make the most positive contribution they are capable of to the country. As it is, Eskom is in trouble to such an extent that appointing the best person to the job was imperative, whatever their race. Hopefully, Mantashe added in concluding this specific point, the new Eskom CEO would not run away when the going gets tough.

According to a universally respected member of caucus who supports Ramaphosa, the points Mantashe and Gordhan made to caucus were absolutely realistic and factually inescapable, but they made no obvious impression on the dissatisfied faction. Supporters of Mantashe and Gordhan were convinced by both their demeanour and the substance of their answer, but if the aim was to win over the other side, the effort failed. In the Ramaphosa camp, several leading members are deeply worried by the turn of events. In the end, it was decided that caucus would not vote on the matters raised as a decision on such matters fell outside the mandate of caucus. The matter must be settled at the ANC NGC in 2020, the caucus agreed.

That neither the dissatisfied grouping nor the Ramaphosa camp saw fit to demand a vote is clear evidence that neither side is convinced it commands the support of the majority of ANC MPs.

Such uncertainty causes additional worry to several leading members of the Ramaphosa grouping. They believe the matters raised by the dissatisfied grouping are but red herrings, especially given how empirical the facts on South Africa’s economic state and options are, and how well Mantashe and Gordhan explained the situation.

The real reason for the aggravated state of those who expressed their satisfaction is the uncompromising and focused way Ramaphosa is driving the fight against corruption. Or at least, such is the narrative in the Ramaphosa camp.

Although poor governance and corruption occur in opposition-run municipalities, the truth of the matter is that corruption in opposition-held areas (be they DA-run or IFP-run) is simply not a patch on the wholesale looting and decay in almost every single ANC-run jurisdiction.

If South Africa’s strict and clear anti-corruption legislation is aggressively implemented, as seems to be imminent, it will strike the fear of the living God into many branch representatives at the 2020 NGC, because the delegates tend to be ANC leaders at branch level, which means many of them serve as members of provincial legislatures or as municipal council members. Given the extent of corruption and maladministration in ANC-governed areas, the fact that those in government will be held criminally accountable and that the ANC policy of cadre deployment means the senior officials who may very well also go to jail are also ANC members and supporters, is the real reason for the frenzy and dissatisfaction amongst Ramaphosa’s critics in the ANC. They are, so the narrative in the Ramaphosa camp claims, merely worried that their corrupt deeds will catch up with them.

As it happened, last week’s fateful ANC caucus took place on the very morning ANC MP caucus colleague, Zuma acolyte and former state security minister Bongani Bongo was arrested by the Hawks on corruption related charges. He is out on R5,000 bail. Some caucus members were heard claiming loudly that selective prosecution was taking place (that some critical of the power- that-be were targeted unfairly, and that it felt as if the Scorpions were back – as if they were never disbanded. In the ranks of those stoking the fire against Ramaphosa and his policies, the latter is not meant as a compliment, but as criticism of those holding the power of the sword in South Africa.

No one in the Ramaphosa camp was blind or dead to the resuscitation of the claims, language, symbolism and populism used so effectively but disastrously in the run-up to the 2007 ANC conference in Polokwane, when it succeeded in replacing a ruling president (Thabo Mbeki) with a populist who well nigh destroyed the economy (Jacob Zuma). And some of them shivered just a bit at the very thought of a repetition.

Last week’s ANC caucus may well prove to be the first rehearsal for the onslaught against Ramaphosa at the 2020 ANC NGC. It will be fought in the preceding general meetings at branch, regional and provincial level. And for every South African who loves this country, it will be a political life-and-death struggle between the perhaps not-so-good on the one hand, and the criminally corrupt forces of evil on the other.

Buckle up – it will be another bumpy ride for the beloved country. DM