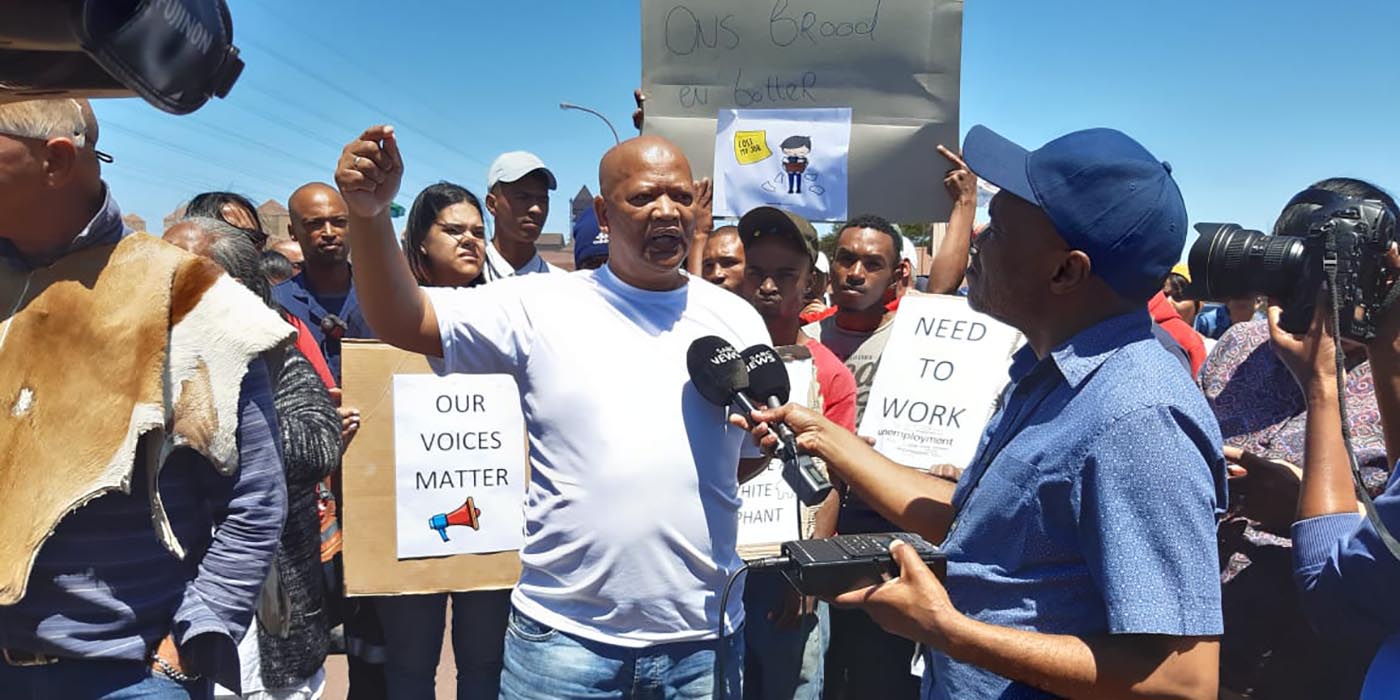 Hundreds of community members, community activists and workers and contractors from the Saldanha Bay ArcelorMittal steel plant protest against the closure of the plant, 21 November 2019 (Photo: An Wentzel)

As the number of jobs lost because of the closure of the ArcelorMittal Saldanha Steel mill looks set to climb, protest action is ramping up and government is being asked to step in.

Freedom chants from the 1980s opened a protest in Saldanha on Thursday November 21 over what could be 2,000 jobs lost when the dust settles and the last truck rolls through the ArcelorMittal Saldanha Steel gates by February 2020.

According to the Black Business Alliance (BBA), a group of small business owners and subcontractors operating in the greater Saldanha Bay area, at least 200 subcontractors will lose their contracts – leading to the loss of more than 1,000 jobs. That is besides the 568 Saldanha Steel employees.

Shouting “we want steel! we want steel!”, about 350 protesters gathered at the entrance to the steel mill off the R37 on the West Coast to make their voices heard and demand action from government to keep the mill open.

ArcelorMittal announced the closure of the mill on 11 November, saying they were losing money and that the mill would start winding down immediately. The affected communities sprang into action and a call to protest went out. First called for Tuesday this week, that date changed to Thursday as more organisations and activists wanted to support the protest action.

The protesters were not only employees of ArcelorMittal, but consisted of members of the community, activists, religious leaders, local politicians and other directly affected people including a small group of women from the Witteklip Dagsorg (Witteklip Daycare) créche. They brought about 20 of their charges to the protest, saying they had the permission of the parents as the children would probably not be able to attend the créche in the new year when the parents are without jobs.

This means the créche will have to close its doors – and it’s not the only one. There are seven daycare centres in the area, caring for about 250 children and employing around 30 women. These centres received funding from the plant’s CSI programme, which will also disappear, along with the jobs of the women working as carers for the children.

The economic knock-on effect of closing the steel mill is much broader than the 568 people employed by the mill losing their jobs.

When the closure was announced, the South African Social and Economic Development Forum (SASDEF) condemned it and called for government intervention.

“Government cannot allow Saldanha Steel to close its operations as it will only mean socio-economic destruction and unemployment for thousands of workers in this industry. This has a far greater impact than Saldanha Bay,” it said.

Some members of the Black Business Alliance arrived at the protest site early. One of them was John Sutele.

“We are here to show our support for the employees and people working for Saldanha Steel that are going to be affected by the closing of Saldanha Steel,” he said.

“That’s why we are here, to show our support, with the hope that government will see this and maybe just do something – maybe some kind of intervention, because we can’t afford for the plant to close down.”

“The unemployment rate of young people in South Africa is 55%, in the West Coast it is more than 55%. We are seeing our people being dragged into tik and drugs, our young people are dying, so we can’t lose Saldanha Steel.

“Why we are here today is to say, government, you must intervene. Why has the Minister [of Trade and Industry Ebrahim Patel] not come here? The local community is excluded from a very important conversation and that is the future of Saldanha Steel.

“The news broke last week that this plant closes next February and all workers are being let go. Then they gave the workers two days to decide who will take a voluntary package – shocking. Can you imagine how traumatic that must be for the workers?”

“Saldanha Steel has been supporting schools. They have opened up two science centres, where they help children with science and mathematics, so imagine if that is gone. What support are our children going to get, to get that type of education at the end of the day and to further their education and their lives?”

She pauses for a moment, then frowns and says: “And it’s not only Vredenburg or Saldanha that is going to be affected, it stretches so far as in to Paternoster, St Helena Bay, Langebaan as well – it’s broader, throughout the West Coast.”

Claassen said people needed to speak out about what was happening. He said ArcelorMittal “must stop this nonsense of victimisation and intimidation where they tell our people not to speak to the media. Speak to the media, when you’re done, it’s done.”

When Daily Maverick asked ArcelorMittal if and why it had told employees not to speak to the media, a spokesperson said: “It is not company policy to comment on speculation or hearsay as we do not have the details.”

Sidwell Medupe, the spokesperson for Minister Ebrahim Patel, said, “The minister has reiterated that [ArcelorMittal] must come back to the drawing board to try and find a solution.”

Claassen closed the protest with the announcement of another protest on Thursday 28 November, at which Cosatu and ANC alliance members will be present. He said the protest would be taken to Parliament and that buses would be arranged to transport the community to Cape Town. DM