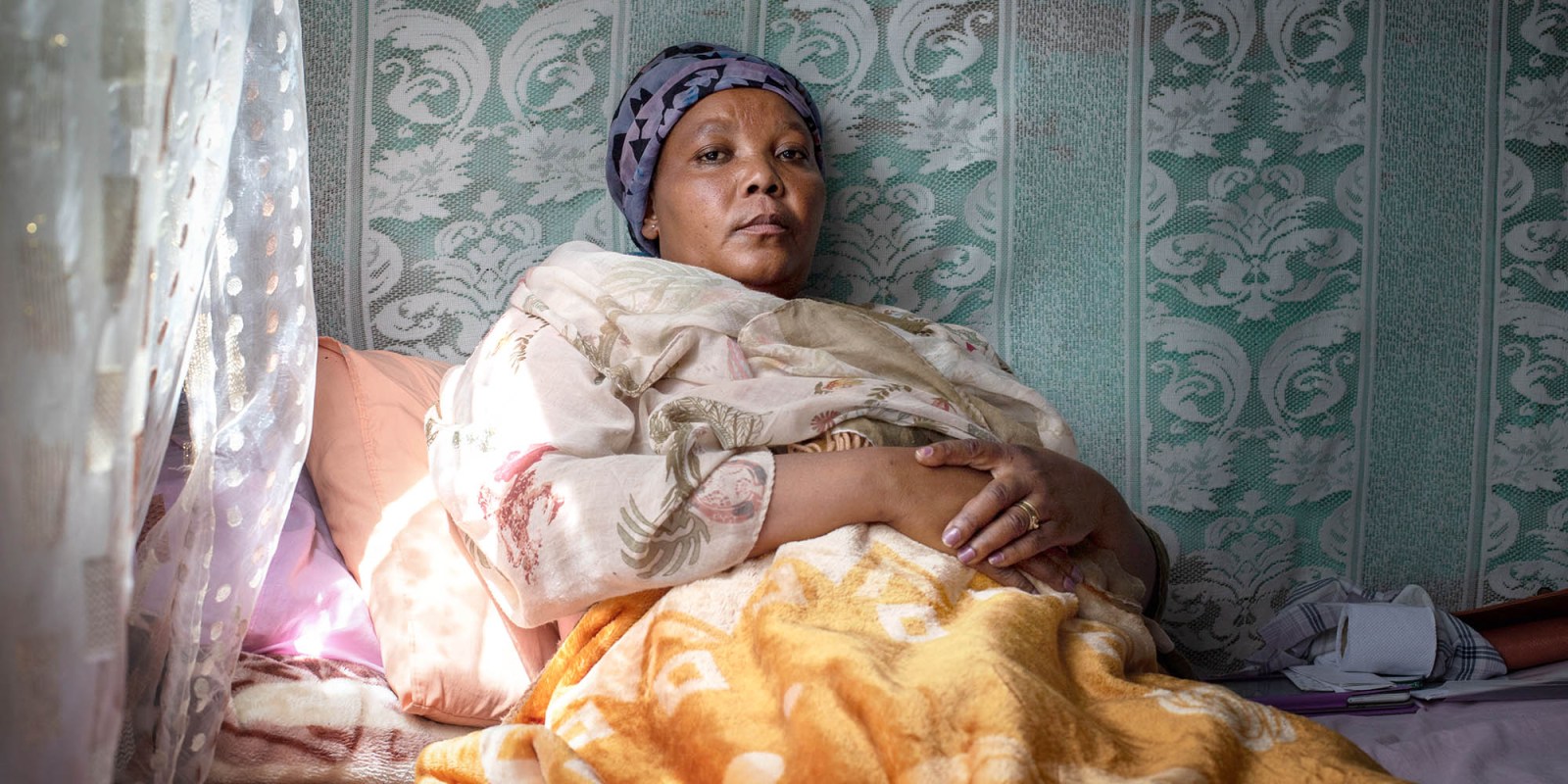 Nomhle Madiba in her Marikana home days after her husband, a NUM member, was murdered in the area. (Photo: Greg Nicolson)

Kaizer Lungisa Madiba is the latest mineworker to be murdered in Marikana as tensions between Amcu and NUM continue to simmer. With NUM trying to recruit members in the area, he might not be the last.

Nomhle Madiba was in her shack in Nkaneng, Marikana when she received the call. Her husband, Kaizer Lungisa Madiba, had left to walk to work at Sibanye-Stillwater’s platinum operations. She heard gunshots and moments later got a call from a private number.

“Come and fetch your dead dog,” said the caller.

Madiba’s murder, on 1 November 2019, was the latest in a string of killings in Marikana that have marred the area since the 2012 Marikana massacre and could continue as the National Union of Mineworkers (NUM) attempts to rebuild in the platinum belt, an Association of Mineworkers and Construction Union (Amcu) stronghold.

Madiba participated in the 2012 and 2014 strikes at Lonmin, which was acquired by Sibanye-Stillwater in 2019, and the vocal leader had been quoted by multiple media outlets. He fell out of favour with his Amcu comrades and was charged alongside other mineworkers with the murder of Amcu chairperson Malibongwe Mdazo in 2017.

When Madiba and his co-accused appeared in the Brits Magistrate’s Court in 2018, an Amcu supporter held a placard listing their names and stating, “These are the platinum belt Amcu killers”.

The charges were dropped and Madiba and some of his co-accused started to organise for NUM in the area. It’s rare to see a NUM T-shirt in Marikana as many people blame the union for collaborating with the government and police in 2012, but Madiba, having survived murder charges, wasn’t afraid to recruit members.

“He was such a brave and good man. He was also very outspoken, which might have obviously made him a few enemies and eventually led to his death. For us, his family, he left too soon. We still needed him,” said Nomhle Madiba.

NUM Rustenburg regional secretary Geoffrey Moathe said Madiba was the second NUM member killed in Marikana in 2019, while another was killed towards the end of 2018.

“People are being killed for associating with the National Union of Mineworkers and your authorities seem to not take this in a serious light,” he said, speaking at NUM’s Rustenburg offices.

NUM, however, is determined to rebuild in the platinum belt after losing its majority status to Amcu following the massacre and spread in strikes in 2012.

“When one says we want members to return to the National Union of Mineworkers, obviously you are treading in one man’s territory and it can only call for some kind of retaliation or resistance,” Moathe said, without directly casting aspersions on Amcu members.

Moathe was speaking after meeting a union task team to organise a NUM and Cosatu rally in Marikana on 17 November, the union’s first since 2012. The union and its federation believed Madiba’s killing was linked to the rally and NUM’s attempts at resuscitation in the area.

NUM isn’t a recognised union at Sibanye-Stillwater and the company denied its request to use Wonderkop Stadium, near the infamous koppie and where Amcu regularly holds mass meetings and rallies. Instead, the union held its event at Marikana West Community Hall.

Around 1,000 people attended, far fewer than the 15,000 the union first said it was expecting, but hosting a rally of any size and without incident in Marikana was a symbolic victory for the union.

NUM president Joseph Montisetse said in an interview that the union had faced challenges from rival labour organisations on the platinum belt before, including one called “Mouthpiece” that was formed in the area in the 1980s. As a “revolutionary union, it’s sometimes necessary to retreat”, he said. Now the plan is to regroup.

NUM’s regional secretary Moathe said the union has 38,000 members on the platinum belt and appeared to be making inroads at Sibanye-Stillwater

But there appears to have been little change in union membership numbers recently. This suggests that neither NUM nor Amcu have been making any inroads into each other’s base. Impala Platinum (Implats) spokesman Johan Theron said there had been no changes in the composition of the union profile on its mines in the past six months.

And the opportunities to entice members to jump ship – especially in a volatile and dangerous environment – are limited. Three-year wage deals have just been signed with Anglo American Platinum (Amplats), Implats and Sibanye-Stillwater, deals that were accepted by all of the unions involved.

The fact that this round of platinum wage talks concluded without a lengthy and violent strike suggests that unions, which have been confronted with shrinking workforces and other economic forces, may be losing their militant edge.

Still, the wage hikes that have been agreed could yet prove to be a source of tension. They are generally in the 5.5% range, which does not look bad on the surface, with CPI inflation running at 3.7% in October. But prices for key goods in the inflation basket that directly affect workers, such as those toiling in the mines, have been surging.

Both Amcu and NUM members may find much of their increases have already evaporated in the face of such price demands. That could be a spark for renewed militancy and a fresh contestation for members, especially as the profits of platinum producers have been on the rise.

While Amcu works to maintain its grip on the platinum belt and NUM tries return to relevance, both unions have denied contributing to the violence.

Amcu leader Joseph Mathunjwa said recently, “We’re not going to harbour any person who endangers the lives of any person in South Africa as a union.”

He called NUM’s rally an insult to workers.

“This is the same NUM who now wants to go to Marikana and try to convince workers that they have changed, they have repented, but they are the people that were conniving with the state killing the workers.”

While the union rivalry continues, Kaizer Lungisa Madiba’s seven children have been left without a breadwinner.

“Staying here in Marikana is hell. We have been living in fear since the massacre seven years ago. Staying in Marikana is not easy as you never know when you will be next,” said Madiba’s nephew Siyabulela Madiba. DM