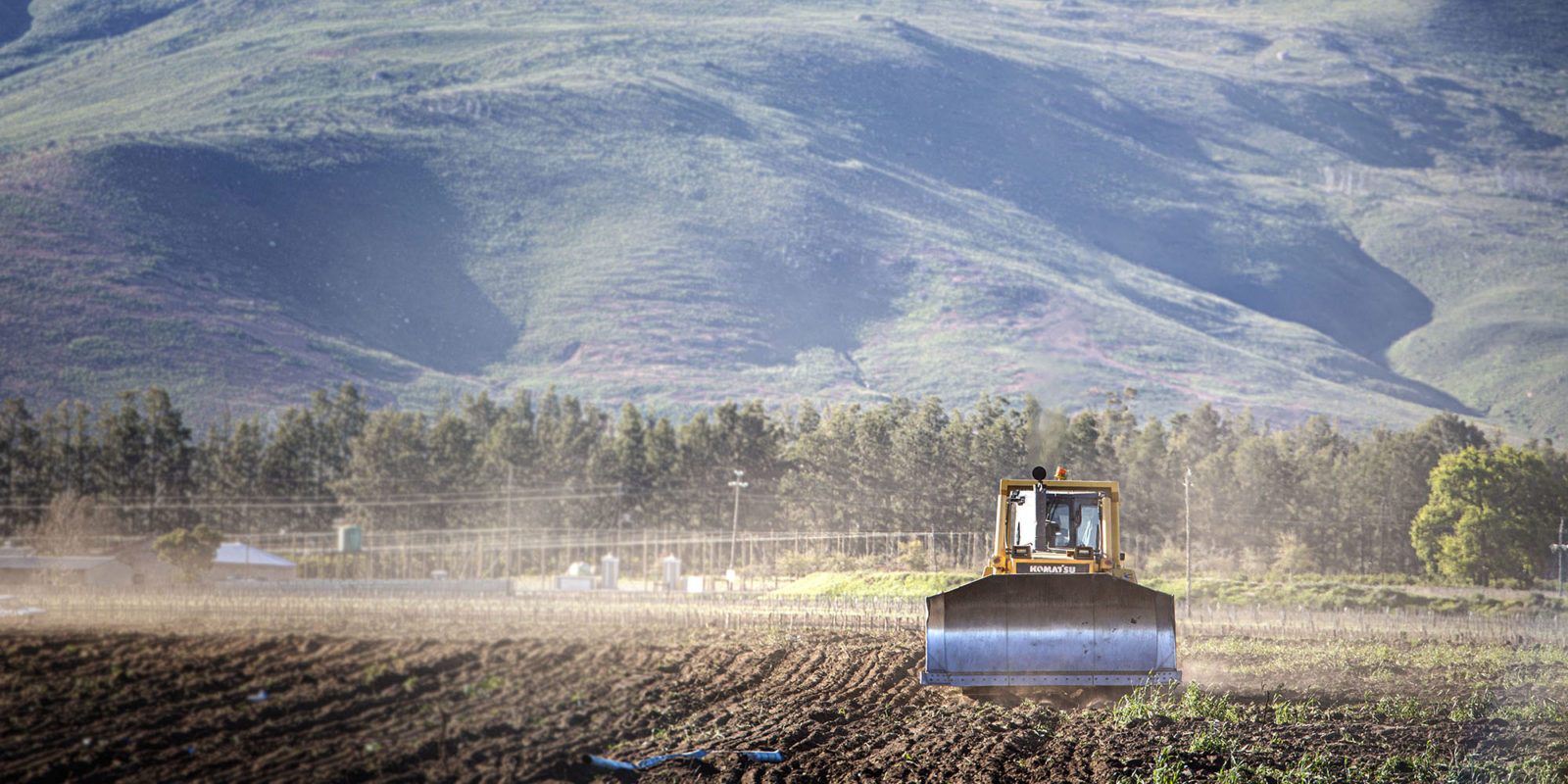 Farmers from across SA gathered recently near Ceres to showcase successful partnerships between commercial and emerging black farmers. In light of the failure of land reform, identified in the 2017 Motlanthe report, farmers have collectively sought innovative solutions on their own.

“For now we see only a reflection as in a mirror; then we shall see face to face. Now I know in part; then I shall know fully, even as I am fully known. And now these three remain: faith, hope and love. But the greatest of these is love.” 1 Corinthians 13

It is significant to mention, as the presence of the two Gs – God and Government – were a constant during the day’s well-attended proceedings – which were translated into three languages: Xhosa, Afrikaans and English.

But, unlike in the past where white farmers, who viewed themselves as “a chosen people” might have prayed to a god who would favour and protect them, in 21st century South Africa farmers have harnessed a loving, universal god to acknowledge the sins of the past, ask forgiveness and help chart a new course in highly contested territory – land.

Call it enlightened self-interest, call it what you will, the survival of South Africa’s commercial agricultural sector which puts food on our tables, exports tonnes of produce worth billions across the globe, as well as providing employment to thousands, is critical to the country’s economic survival and stability.

Nursing a cold and seated quietly among the 450 delegates listening throughout was Minister of Agriculture Thoko Didiza, or MamThoko as many of the farmers affectionately referred to her.

The Ceres symposium, attended by farmers from across South Africa, followed the October 2018 Landbouweekblad/Agri land summit which took place in Bela Bela, an event Nick Serfontein, chair of the Sernick Group, later described as “the equivalent of a small earthquake”.

“The earthquake sparked a tsunami that has washed over our country, creating new hope. The summit will rightly be remembered as one of the most important landmarks in the history of agriculture in South Africa,” Serfontein later wrote.

Serfontein in 2018 said that consensus had been reached about land redistribution and restitution in South Africa, as “it is morally correct because it gives back to those who had their land taken against their will; it is socially acceptable because it creates self-confidence and dignity that goes along with owning land and the right to land; and it is economically correct because it creates opportunities for better lives”.

After writing an open letter to President Cyril Ramaphosa requesting that commercial farmers be included in plans for land reform, the president appointed Serfontein as one of a 10-person advisory panel.

Pieter du Toit, MD of the Du Toit Group family business, founded in 1893, and vice-chairperson of Pals, in his official welcome to the symposium said that the initiative was launched in 2014 “with a dream to build a community that we all can be proud of”.

A community, he added, that “rectified the wrongs of the past while… baking a larger bread to keep food on the table”.

Du Toit said for any initiative to be successful and for potential to be unlocked, local, provincial and national government, as well as commercial and emerging farmers and communities in farming areas had to be included.

The Pals framework, according to its initiators, “represents a radical departure from past land reform initiatives and is based on sound business principals, mentorship and training of emerging black farmers to become successful commercial farmers”.

It is also based on National Development Plan (NDP) principles “and lessons learned from previous unsuccessful models”. While the initial focus had been on black land ownership, it currently included “other opportunities for black entrepreneurs in agricultural value chains, such as pack-houses, cold storage and marketing”.

Landbouweekblad editor Chris Burgess said the Bela Bela conference had been organised to showcase some of the successful agricultural projects the magazine and its journalists had written about over the years.

“For the first time, agriculture told its story and instead of a litany of failures it was a story of extraordinary successes, of partnerships, of South Africans finding each other and building a common future.”

Burgess added that South Africa was fortunate to have a minister of agriculture “who understands agriculture, who has a depth of experience and who knows what needs to be done”.

The 2017 report of the High-Level Panel on the Assesment of Key Legislation and the Acceleration of Fundamental Change, chaired by former president Kgalema Motlanthe, found “profound problems in the conception and implementation of the land reform programme”.

These problems, the panel found, extended beyond issues of how land was acquired and related more generally to the manner in which beneficiaries were chosen, how land was identified, how land reform was planned as well as other stumbling blocks.

“The increasing evidence that a degree of elite capture has taken place in land reform in general, as well as in land redistribution in particular, is in part an unintended consequence of the inadequacies of Act 126 of 1993.

“Similarly, the fact that land reform is beset by governance problems, such as lack of adequate transparency and accountability, as well as a declining budget, is in part due to the lack of a coherent framework law for land reform,” the panel found.

Implementation too had been “poor at every level. While the budget has been criticised for not being high enough to cover the costs of restitution (for example purchasing land required) the commission has consistently under-spent the budget, suggesting that the fundamental problems lie with capacity and systems.”

Choices around spending had been poor, the panel found, and there had also been “political meddling in land restitution, both in terms of unreasonable targets for redistribution, as well as in terms of individual restitution awards, which has damaged the integrity of the process”.

Speaking about the economy, Investec Group joint CEO Hendrik du Toit, who flew in from London, said he was “a practitioner of the dismal science of economics” but that it was “wonderful to see people who change real things. What you are doing is amazing. If we could put these stories, put them in a bottle, that is how we will get investment.”

He said South Africa, from a macro-economic perspective, “did not look good”.

“Our government has been rather indecisive for a while. Firstly, since 2007, we have had a leadership structure which did not lead the country, where people were more interested in their back pockets than doing their job. That is hopefully over.”

The world at present was a tough place, “when you are in a developing country which needs help and support. Therefore you have no choice but to do it yourself.”

There was a time, said Du Toit, when there was international involvement and interest in South Africa.

“I travel across the world. Most of the money we manage of the R3-trillion is for foreigners which we deploy outside the country. The one thing I have noticed is the interest in South Africa is decreasing. Investment interest has decreased substantially. Why? Because there are many opportunities around the world and Asia is the rage. And right now America is drawing capital back into America, which means we have to do it ourselves.”

Economic success, he said, did not come from “rooms of economists giving advice to presidents” but from the bottom up, which is what the Pals initiative was about.

Social development and not politics, said Du Toit, “should be our obsession”.

Prinsloo, who began his address in Xhosa, presented with Gcina Ndaba, one of three directors of the Eyethu Intaba project.

“Land solutions have to come from us,” said Ndaba. “We have to do this as a collective. We need to agree that the land disparities are very skewed in South Africa.”

Ndaba spoke of an initiative in Stutterheim in the Eastern Cape where 154 black farmers who owned title deeds had approached their white farming neighbours to find workable solutions.

“We are currently in that process of negotiating. Myself, as well as Piet and the farmers,” said Ndaba.

Prinsloo said the land debate “is driven by fear” and the narrative needed to change.

Expropriation without compensation, land reform and safety and security were worldwide problems, said Prinsloo, and South Africa was not unique.

“We are scared of what is going to happen, instead of being straight and honest about fear and addressing the fear, coming to the table and talking about what we fear.

“I don’t think the changing of the Constitution was ever intended to dispossess people who are producing off the land… We have identified common ground, we must talk as a collective. My message is, change the narrative,” said Prinsloo.

Farmer Gielie Geldenhuys of Ceres and Tommy Mona, who owns a 51% share in Bambisane Farming, which they set up together, was just one example of how Pals brought together similar hearts and minds.

Geldenhuys told the gathering that commercial farmers had a “moral obligation to make land reform work”. He had intended to subdivide 1,000 ha of his land to farm fruit and livestock with an emerging farmer.

Mona, on the other hand, had approached Pals strategic advisor Gerrit van Vuuren, in 2014 looking for an established farmer with whom to partner. Two weeks later Pals connected Mona with Geldenhuys.

“The day I stood before him the spirit said to me, ‘This is the right man that you must walk this path with.’ He offered me coffee. I don’t drink coffee, but that day I did and I realised there is a solution in my life… I worked for 35 years as a contractor in commercial farming”.

The two men set out their frustrations in dealing with government bureaucracy not only with regard to the sub-division of the farm (which took three years) but also obtaining finance for the venture, an endeavour where “we could not find an open door”.

“We went to the Land Bank. It looked like their door was open, but if you go in the door closes,” said Mona. “Rural development you can call them, they promise a lot and then they just disappear. You will wait until you die.”

“Honourable Minister [Didiza], we cannot always knock on your door. What about if you don’t open? You start with your finger and then you try and use your foot.”

In the end, Geldenhuys and Mona approached FNB for the project – the bank offered a loan as well as a donation.

He added that it was important to “keep politics out of business” but that the partnerships could not survive without the help of the government.

Closing the symposium, Didiza said she had listened to and had heard what farmers had said. The showcase of successful partnerships had proved that there was a “new way of doing things that can bring us together as South Africans”.

“I heard how you are willing, in difficult circumstances, to get involved. We will work with you,” said Didiza. DM