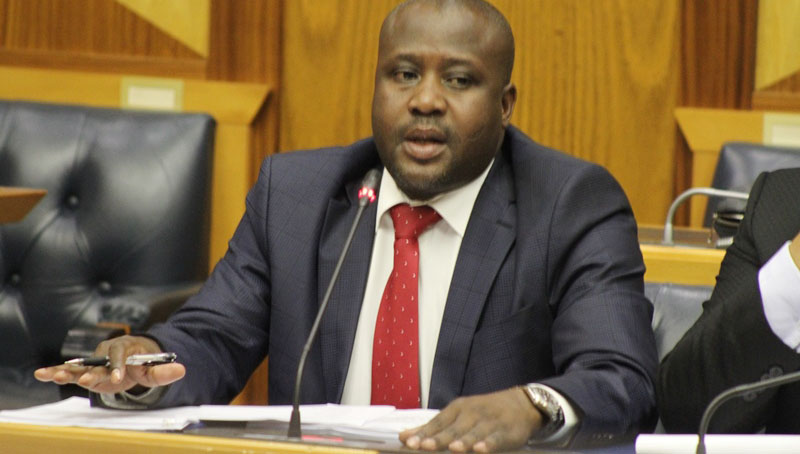 The dramatic arrest of senior ANC member Bongani Bongo, former Minister of State Security and current chair of Parliament’s Home Affairs committee, is a shot across the bow in the fightback by law enforcement agencies against public officials implicated in state capture.

Bongani Bongo appeared in the Cape Town magistrate’s court on 21 November on charges of corruption related to an attempt to bribe Advocate Nththuzelo Vanara, evidence leader of Parliament’s Public Enterprises committee inquiry into state capture at Eskom in 2017.

The ANC MP was arrested earlier by the Hawks and was released on R5,000 bail. The case was postponed to 31 January 2020.

In the vast state capture toxic soup, Bongo might be a smallish big fish – as there are other big and bigger fish implicated in the Eskom probe still swimming around freely.

These include former Ministers of Public Enterprise Lynne Brown and Malusi Gigaba. The Eskom inquiry’s final report was referred to the Zondo Commission of Inquiry into State Capture and also recommended that those involved in suspicious deals with Eskom be investigated by law enforcement agencies.

Vanara, in an earlier affidavit to parliament, said Bongo claimed he had been dispatched by acting Eskom board chairman Zethembe Khoza to offer a bribe – “a blank cheque” – to scupper the committee’s investigation into Eskom.

Bongo turned to the Cape Town High Court to try and prevent an investigation into his conduct by a subcommittee of parliament’s joint committee on ethics and member’s interests. He lost the application.

In June 2017, Parliament’s Public Enterprises committee chaired then by Zukisa Rantho, resolved to look into state capture at Eskom. Shortly afterwards, Rantho and Vanara received anonymous threats. Committee member Natasha Mazzone was also targeted when her “car and documents” were “tampered with”.

Rantho was later “shunned” for her principled stance and fell off the governing ANC’s party parliamentary list selection – postponed in June 2019 after an apparent trade-off between the ANC’s “RET” faction and the CR17 grouping.

Resistance to the Public Enterprises committee inquiry was fierce, with Brown labelling it “a kangaroo court” and the State Attorney, on behalf of Brown, threatening to report Vanara to the General Council of the Bar for his conduct as evidence leader.

The multi-party committee in turn described Brown’s actions as “an attack on Parliament” and vowed to continue its work. It was backed by the Office of the ANC Chief Whip. The committee fought for its right to invoke wide-ranging powers “in the interest of oversight and accountability”.

The committee adopted the report and said evidence before it painted “a disturbing picture of state capture” at Eskom and called for criminal charges to be pressed against those implicated.

The inquiry found “substantial and compelling evidence that a number of corporate entities amassed substantial illicit private gains from Eskom”.

These gains had been spirited out of South Africa through shell companies and private accounts in Dubai and Hong Kong. Apart from Brown and Gigaba, the inquiry also implicated Duduzane Zuma, Atul Gupta and Ashu Chawla.

Bongo was axed as Minister of State Security by President Cyril Ramaphosa in February 2019, but then found himself appointed to chair Parliament’s Home Affairs committee. This appointment was announced in June 2019 by ANC secretary general Magashule and party Chief Whip Pemmy Majodina.

Testimony at the inquiry, said Merten, “firmly moved into the official domain much that has already emerged in the public domain through the #Gutpaleaks”.

“Last month there was a push, ultimately unsuccessful, by some MPs closely associated with President Jacob Zuma to sink the probe before it even got under way. The president himself told ANN7 this week that he believed state capture was “not factual. It’s political”. And Brown has, as far back as 8 August when the inquiry was in its seedling stage, questioned its purpose.”

Bongo’s arrest to face charges of bribery is perhaps an indication of the slow but steady circling by law enforcement agencies of the cast of thousands of public officials who aided and abetted state capture.

As an early Christmas present, it should offer South Africans a small measure of cheer. DM