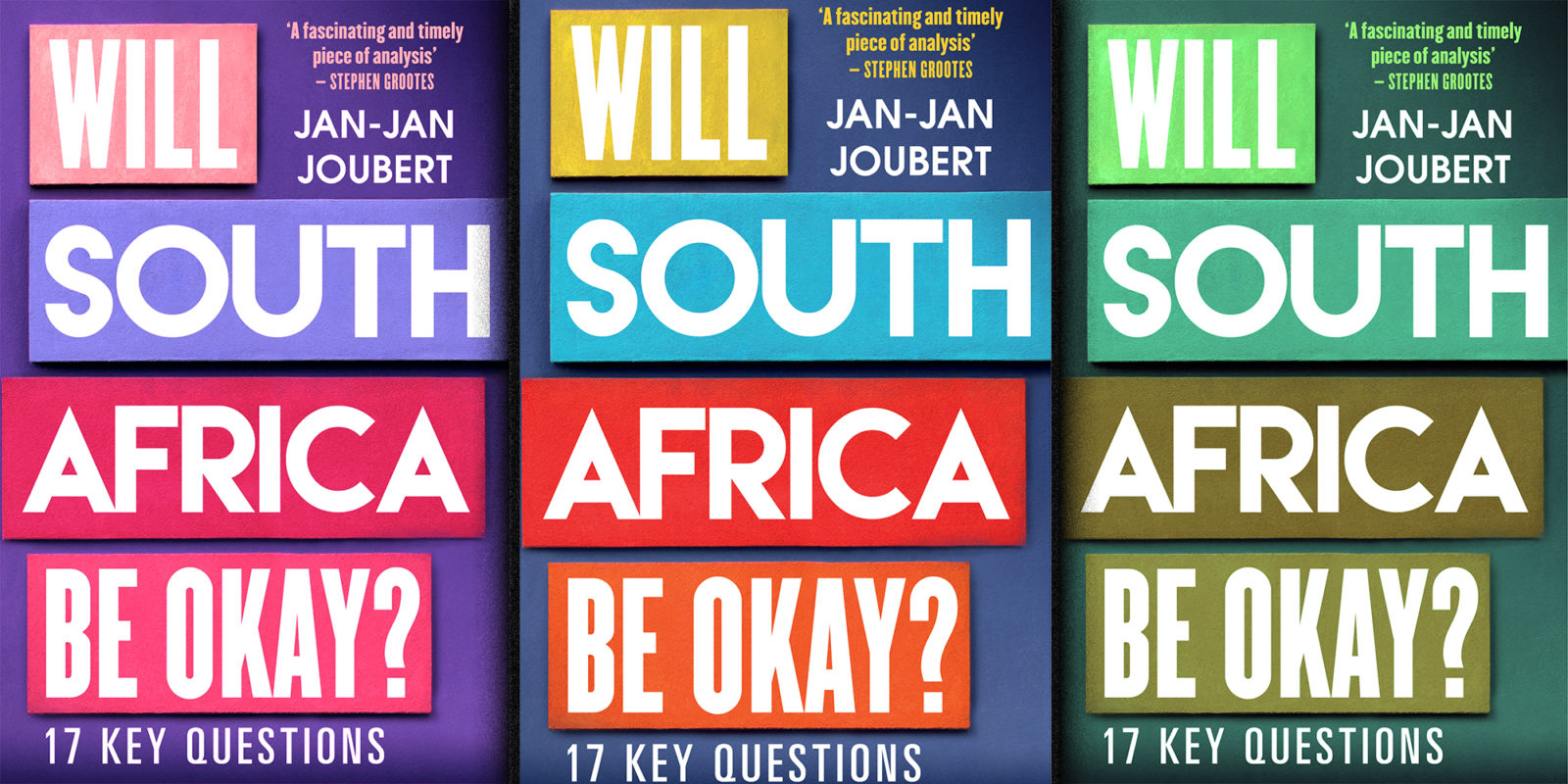 The problem is often that grumbling whites unthinkingly complain with a loaf of white bread under the arm, as it were. They are unaware of how relatively well-off they are compared to the majority of South Africans, for they choose to remain unaware of the actual levels of deprivation and suffering of their neighbours, writes Jan-Jan Joubert in this extract from his book, ‘Will South Africa Be Okay?’ published by Tafelberg.

Let me start this chapter off with a confession. I try my best to live my life non-racially, and I find it infuriating, unhelpful, unnatural, unsound and undesirable to distinguish between people on the basis of race. For me it goes against the grain and flies in the face of how and where I was brought up.

So I’m probably not the most passionate, the best or the most eager person to tackle this topic. But this is a book about the political questions I am asked most frequently by the public, and the question about the role of whites is one I have been called upon to answer often by South Africans of all races.

Deep down I think the role of whites is much the same as that of all South Africans, but whites do find themselves in a distinctive, yet – and this is important – inseparable position with regard to the rest of the country’s population. That distinctiveness is mainly based on the systemic discriminatory realities of the past, the consequences of which will take a long time to disappear.

As a point of departure, I believe one of the most vital roles for all South Africans, and specifically for whites, can be found in two Bible verses. The first of these is the motto of this book. It comes from the Sermon on the Mount and can be found in Matthew 5 verse 9: “Blessed are the peacemakers: for they shall be called the children of God.”

It’s not that I want to gush, act holier than thou or start a skirmish with Bible verses as weapon, but if we read this in the context of the Bible as a work of literature, there is surely no greater compliment the Evangelist can give − from his own perspective − about an attitude to life than that of being called a child of God. One can only agree that setting the goal of promoting peace at every opportunity is exemplary.

Actually, peace is an exemplary goal in just about any context.

Now keep in mind that you are not dependent on another person’s search for peace to be a peacemaker. Your role as peacemaker doesn’t depend on someone else’s behaviour. You can’t say, “I’ll be a peacemaker only if the other role-player wants peace.”

You should in any case be a peacemaker, of your own free will, at all times. It depends on you – not on the other person.

And that brings us to the second biblical text, from Proverbs 15 verse 1: “A soft answer turneth away wrath: but grievous words stir up anger.” I think that in South Africa rage, frustration and blame are cheap emotions which exact a high price. Everyone seems to be angry and frustrated, and in the lyrics of the Afrikaans industrial music band Battery 9, “Almal soek net altyd iets om te blameer” (Everyone’s always just looking for something to blame).

To me, there are few things as irritating as whites who have adopted an attitude of complaining and moaning about absolutely everything as their credo, whose negativity about life in general and life in South Africa in particular means they unfailingly see the worst in every event, or who use the unacceptable behaviour or political reasoning of someone from another population group or political belief to justify their own unacceptable behaviour or limited political reasoning. Why not rather try using a gentle word, acknowledging the positive or potentially positive aspects, and thus set a better example?

The problem is often that grumbling whites unthinkingly complain with a loaf of white bread under the arm, as it were. They are unaware of how relatively well-off they are compared to the majority of South Africans, for they choose to remain unaware of the actual levels of deprivation and suffering of their neighbours.

And in this country, the chance is statistically more than 90% that the skin colour of your neighbour (meant here in the biblical sense, which could be better translated as those close to you – not just your immediate geographical neighbour) won’t be white.

Here is the unvarnished truth: most people in this country live in what my dear friend the late Prof Sampie Terreblanche so aptly described as “dehumanising poverty”. And regardless of how pathetic our democratic governments may have been at redressing this situation since 1994, the truth remains that centuries-long severe systemic oppression was and still is the principal cause of that deprivation.

The next question that usually crops up in a conversation of this nature is: what is an individual supposed to do? How can one person make a difference? There is only one answer to this: get personally and directly involved. And that’s not so hard or impossible.

When my grandmother, the late Alida Moerdyk, recovered after heart bypass surgery in 1996 at the age of 73, she asked to speak to me in private. She said it was important to her that I should know she hadn’t been supportive of apartheid, but she deeply regretted having been too focused on other matters like her job and raising a family; that she should have done more to oppose apartheid personally and actively. My response was to remind her that her life wasn’t over yet. And then she stepped up her proactive, personal involvement in distress relief initiatives in Klerksdorp’s township, Jouberton, driving herself there in her little blue car to be physically present and of assistance.

Another example to me is my brother Michael’s involvement in upliftment work in the vicinity of Hermanus, where tension prevails amid an inflow of unskilled workers and a lack of space for housing (the town is hemmed in between mountain and sea).

One can either do nothing or become involved. He chose to become actively involved in efforts to deal with a truly tough situation, and I admire him for his exemplary contribution, specifically in taking large numbers of fleeing foreigners who live in the township Zwelihle into his home for an extended period of time when the protests deteriorated into violent and criminally destructive xenophobia. Blessed are you, my brother.

In this regard one hears that white Afrikaans speakers are currently joining all kinds of organisations in droves, and the reason they give is that they are fearful of expropriation without compensation, and fearful of the EFF in particular. There are two things at which we Afrikaners have excelled over the years: being fearful and joining organisations. And that has never been a solution. The only constructive solution lies in involvement and direct personal, individual interaction through honest dialogue, in which it would be worthwhile for whites to listen more than many white people currently do. It’s a strange phenomenon, this aversion to listening on the part of many whites. I regularly come across it. They just want to talk and tell everybody their opinions.

On hearing I have good access to and a blessed relationship with the EFF, many whites are quick to tell me what they think I should say to the party. What they don’t seem to consider for even a moment is that I am enriched by listening to the EFF, not by preaching to them. It’s only through listening that one gains an understanding of anything.

When it comes to defining a useful attitude to life for adopting a constructive role for all South Africans – and then specifically also whites – I believe the best answer is liberalism as defined by the great South African writer and founder of the Liberal Party, Alan Paton: “By liberalism I don’t mean the creed of any party or any century. I mean a generosity of spirit, a tolerance of others, an attempt to comprehend otherness, a commitment to the rule of law, a high ideal of the worth and dignity of man, a repugnance of authoritarianism and a love of freedom.”

I find it so inspiring and helpful if one tries to live liberalism as Paton defined it. Let’s all give it a chance, shall we?

Two important and helpful newspaper articles on the place and role of whites in South Africa appeared in July 2019 – one by former public protector Advocate Thuli Madonsela, and the other a column by the editor of the Sunday paper City Press, Mondli Makhanya. Madonsela’s article deals mainly with land reform, but it also contains valuable pointers to the role of whites in general. She compares the situation caused by past dispossession to a Monopoly game (a wicked analogy, Advocate) where one team was not allowed to play until after the other team had bought all the properties, houses and hotels on the board. An alternative scenario is that of two athletics teams, the pinks and the blues, where the blues are given a head start in a race and the pink team is allowed to join only once equality is declared – resulting in only the fastest of the pinks catching up with the slowest of the blues. DM

Jan-Jan Joubert is an author, journalist and political commentator. He has covered Parliament since 2011 for various publications and journalism platforms, and was previously political editor of Die Burger, Beeld and Rapport, as well as deputy political editor of Sunday Times. Will South Africa be Okay? is his second book and is published by Tafelberg. He lives in Cape Town.