Politics can never be about water 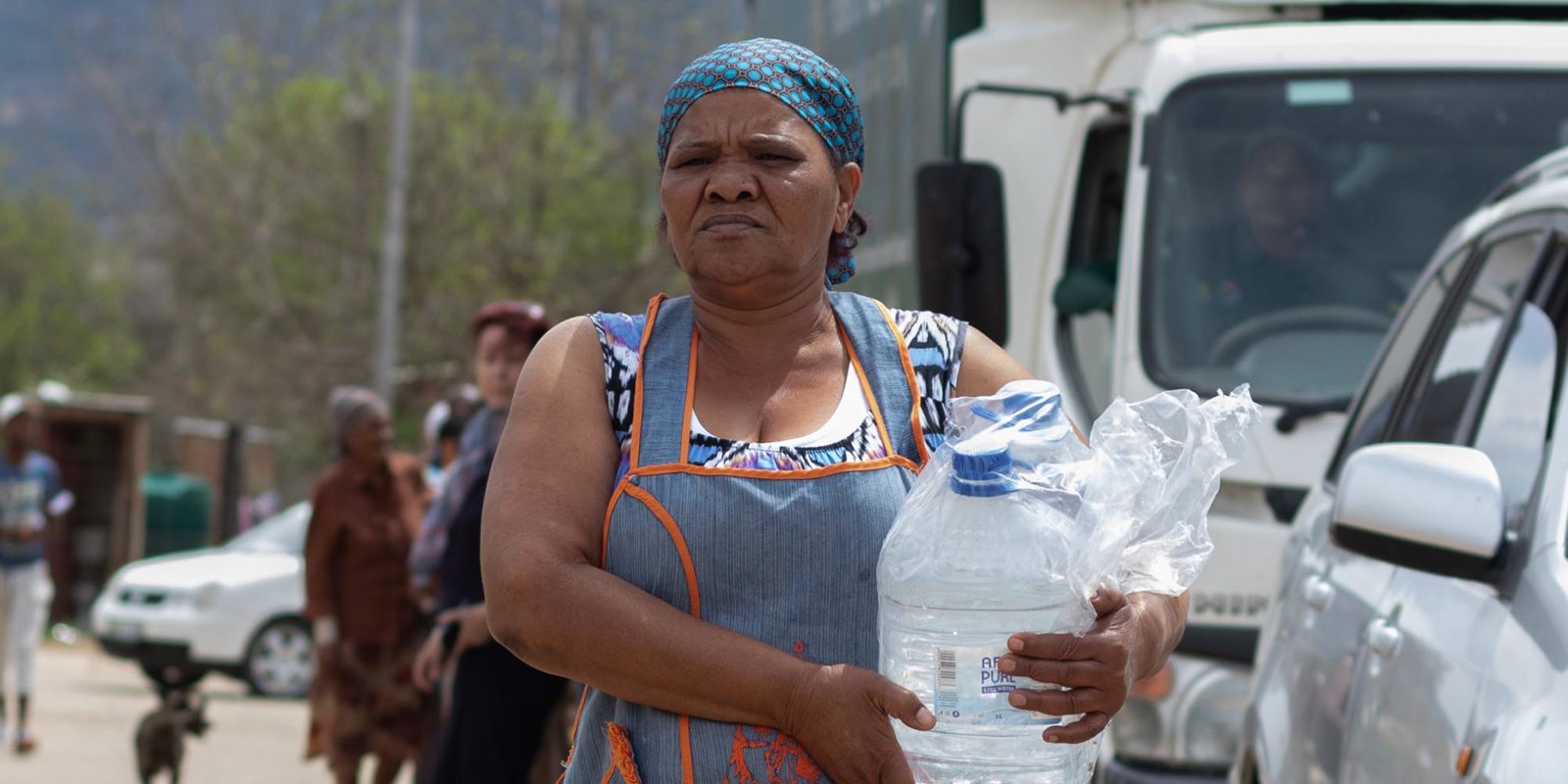 Cape Town may have avoided Day Zero, but parts of South Africa have not, particularly several Karoo towns in the Eastern Cape that have run out of water. Boreholes and dams have dried up, taps have run dry and the rain stays away, reducing farms to dust and threatening communities. Maverick Citizen spent the last week in the towns of Graaff-Reinet, Bedford, Makhanda and Adelaide. Many residents wonder why Cape Town’s water crisis got national attention while they are getting very little.

It is mid-morning in Bedford and already hot. For months the town has had severe water struggles.

Riaan Pokpas, 39, is sitting on the pavement near the Gift of the Givers truck, handing out bottles of drinking water. He is hiding his two five-litre bottles behind his back.

“We sit like this every day. In droogte en dorstigheid (in drought and thirst),” he said. “There are six children at my house. If I show them the water now it will be finished by tonight.”

“I always wanted an en-suite bathroom, you know, where the toilet and the shower is in the bedroom. It was a big mistake. Now the bedroom stinks all the time,” she said, “You can’t drink the water from the taps. It makes your mouth feel dry, like it does when your sugar is high. The water from the tap is white. It looks like it is boiling and it smells like bleach. A lot of us have broken geysers. When the water came back it came back so strong it broke our geysers. We are really struggling. If you send children to go fetch water you worry all the time because they have to cross the tar road. You time them. Then you know when you must start to worry.

“There are people here who will fetch water for you if you pay them R20. That is very expensive,” she said.

“We have had some good rain but people who had rain tanks had to lock their yards because their neighbours were helping themselves to their rainwater,” she said.

Maria Rooi, 74, has just had surgery. She lifts up her apron. “Look how bad they had to cut me,” she said. She is incredibly frail. “I haven’t been feeling well and the toilets really stink, so I can’t eat. I feel nauseous all the time. I have to cook for the three little ones but we struggle for water. The boreholes are too far for me. I can’t walk all the way there.”

Keanu Baartman, 20, from Gift of the Givers, jumps from the truck to carry her water.

“Dankie meneer,” she thanks him and returns to her house where she is looking after her grandchildren.

Mohammed Gangat, 29, who owns the Fruit & Veg and the general dealer in Adelaide, has been helping out with the Bedford water crisis.

“Just before April we started having serious water problems. The dam ran dry long before that already. Before that, the high-lying areas already had infrastructure problems. I have tried to invest in people as well. I bought water to give to those who had nothing to drink.

“But a drought is not just about water. It has taken a lot out of people,” he said. “People got depressed but now that we are receiving water from donors I can see a difference already,” he said.”Water brings hope. We are relieved that more help is coming.

“When people see me, they see water,” Gangat said. “I try to help everybody. They found good water, in Adelaide we are waiting for Oom Gideon (Groenewald, Gift of the Givers’ hydrologist) to come drop the pumps.”

He said the drought has brought Adelaide closer together.

“It even brought the two towns together,” he said. “At the height of the crisis I met the ladies from Bedford who were helping to sort it out. We spoke to one another every five minutes. Now if a day or two goes by without phone calls I phone and say: ‘How are you? Are you still alive? Do you need anything? Is everything okay?’ You miss them. We have become like family.

“People are so desperate for water. They are also so very grateful,” he said.

“We work very closely with the municipality. Every single day donors are dropping off water for the town at my home. I phone the municipal guys to ask who needs water.”

Municipal councillor Cecilia Auld said all the political parties took a decision that water will not be used to score political points in Bedford and Adelaide.

“We get water from the Fish River. This water scheme was never designed to provide water for Bedford and Adelaide. Because the Adelaide dam has dried up we are having to split the supply. We had 18 to 20 kilolitres a minute, but now we have half of that. Adelaide has more people so 11 kilolitres are going to them and nine to 10 to Bedford. There is not enough pressure in the reservoir to get water to everybody all the time. We have had many hits and misses trying to sort it out.

“There was also a strike at Amatola Water. This really impacted negatively on us. There was a lot of sabotage. We got that sorted. I must say since then the Amatola team here in Bedford has been outstanding. They have been working long hours and gave up of their own time to make it work.”

She said they have not been able to find a schematic map of the two towns’ water systems. This made it difficult to work.

“There are valves all over the place and we have to figure out which to open and how many turns – to prevent airlocks. We have had a few airlocks this last week but we are getting to the bottom of it.

“With careful planning, we can get the reservoir between 50% and 60% daily,” Auld said.

“Because the residents of the township go to work early and they do washing by hand we have agreed that they will have water between 5 and 10am. In the evening 4pm to 8pm we send water to the town. We are 600 to 700 people in town and 11,000 in the township. We make those sacrifices as they have enough hardships as it is,” she added.

“Some people here have boreholes. They have been sharing their water with everybody. Water brought the community together in an incredible way,” Auld said.

She said the town would be in serious trouble if they had not received drinking water from donors.

“There are two boreholes that can provide 50,000 litres per hour to the town, but they are not operational. It would be good if we can bring those online as well,” she added.

She said a nearby wind farm has also offered to drill a borehole for the town and provide more tanks.

“This was a good lesson for white people. It was a humbling experience for everybody. We all now know how to wash in a bucket,” she said. “It is hard and stressful.

“It breaks your heart to see a gogo struggling with a wheelbarrow with water bottles,” she said.

She said the farmers were all helping one another to get their animals through.

Qondile Malone, a liaison officer with the Office of the Eastern Cape Speaker, said it was painful to see people struggle to access water.

“Some people have started a business to rent out wheelbarrows for R 20,” he said.

Only two ambulances for Covid-19 patients in Nelson Mandela Bay

Covid-19 may lead to spike in AIDS deaths, warns UNAIDS

Amid escalating gang violence, the City of Cape Town wages war on the poor