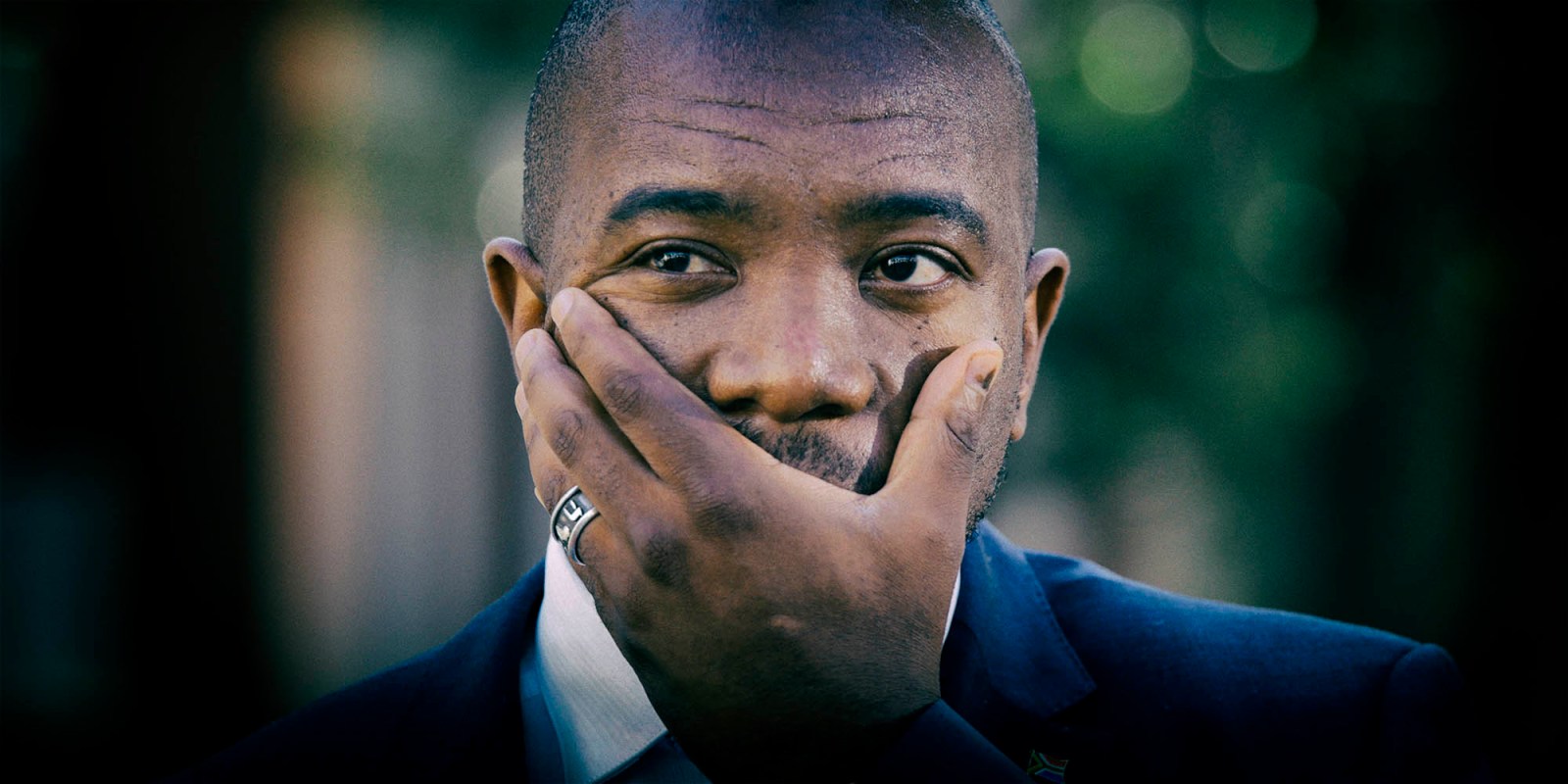 The leaking of recent reports to media aimed at fostering doubt about DA leader Mmusi Maimane’s integrity is clear evidence of an anti-Maimane faction mobilising to oust him. Among his party supporters, Maimane’s failure to deal decisively with this conflict is raising concerns that his heart may no longer be in the leadership role. At the centre of it all: the ongoing fallout from the DA’s disappointing 2019 election results.

Within the space of three weeks, Sunday newspapers have carried two reports casting aspersions on the integrity of DA leader Mmusi Maimane.

The first, published on 15 September by Afrikaans weekly Rapport, involved the home in which Maimane’s family resides in the Cape Town suburb of Claremont. This home was declared to Parliament in 2018 as being owned by Maimane, but it has since emerged that it is being rented by Maimane from a Durban businessman.

The second story was also carried by Rapport, on 29 September. The newspaper reported that Maimane had continued to drive a car subsidised by disgraced Steinhoff boss Markus Jooste for some time after Steinhoff’s scandalous collapse.

Even taken at face value, the two stories do not offer evidence of grave misconduct or corruption on Maimane’s part. But in combination, they paint the picture of a leader guilty, at the very least, of poor political judgment.

That is, of course, if the reports are accurate. Maimane has acknowledged that he erred by declaring his Claremont home to Parliament as owned by him. But he claims this was based on the misunderstanding that he was obliged to declare property that was rented, and did not stem from a desire to conceal the fact that the home was rented from a private businessman.

“What I’m wanting is documentary proof that Mr Maimane is actually paying rent first of all, and secondly, paying a market-related rent”.

Asked by Daily Maverick on Tuesday to clarify his concerns regarding Maimane’s accommodation, Waters replied:

“I am forbidden to speak to the media.” He said that this directive had been applied to him as of Monday.

When it comes to the Steinhoff-sponsored car, Maimane’s defence is that the vehicle’s use was a donation made to the DA, rather than to him personally, in advance of the 2016 municipal elections. It was returned to Steinhoff after the extent of the scandal became clear, and Maimane strongly denies the Rapport suggestion that he initially “refused” to return the car against the objections of other DA leaders.

“The DA received a donation in the form of the use of a vehicle for a limited period, to assist with campaigning in the Western Cape and to help the leader of the party with the execution of his duties. The party at no stage took ownership of this vehicle — its use was facilitated through a hire car company, the cost thereof was borne by Steinhoff. When the revelations regarding Steinhoff came to the fore, we thought it appropriate in the circumstances to return the vehicle, which it subsequently was.”

What is clear is that these stories are emerging now as part of an orchestrated campaign to force Maimane from leadership. The fact that they are being disseminated largely through the Afrikaans media is probably no coincidence: Rapport readers are part of the constituency whose support the Maimane-led DA is thought to be increasingly losing through the party’s stance on BEE and Maimane’s public comments on issues such as white privilege.

Part of the DA’s disappointing election result is attributed to the loss of support from conservative white voters switching allegiance to the Freedom Front Plus. Maimane’s critics within the DA point to this as evidence that the party is drifting from its course.

The Freedom Front Plus itself has said its increased vote share was derived from disenchanted former DA voters. Yet although the FF+ growth was impressive, it was off a very low base. In real terms, the FF+ won just over 71,000 more votes in the 2019 elections than in 2014 — raising the question of why the loss of this relatively minuscule portion of the South African electorate is causing such consternation within the DA.

Of far greater concern, many would argue, was the DA’s failure to significantly grow its share of black voters in the May elections. For a party which purports to have serious aspirations of governance, the inability to make its offering attractive to the largest part of the South African population represents a far more significant problem.

This appears to be the central dispute within the DA currently — with Maimane, weakened by the party’s election performance, seemingly incapable of stamping his will in one direction or the other.

Daily Maverick understands that there is presently more than one group unhappy with the party’s trajectory under Maimane, with the result described by an insider as “a union of people who were never on the same page [ideologically], but have the same opponent”.

One group is known as the “1959s”, mobilised by DA MP Ghaleb Cachalia and announced openly to the party’s parliamentary caucus as a body aimed at promoting true “liberal” thinking and debate. Other MPs believed to be aligned with this group include Belinda Bozzoli and Michael Cardo, although there appears to be some discontent with the manner in which Cachalia prematurely announced the group before wide lobbying was undertaken.

This group is believed to lack real disruptive power, however, compared with another smaller faction said to be composed of former Maimane allies who have now turned against him. This bloc, which Daily Maverick understands includes Maimane’s former chief of staff Geordin Hill-Lewis, are believed to be the real kingmakers within the party.

Daily Maverick approached Hill-Lewis for his response to this allegation. He replied:

“I would prefer not to comment on internal DA matters.”

Maimane “has been personally betrayed, and he is in shock”, a DA insider told Daily Maverick.

The insider added that Maimane’s failure both to stamp his authority on the party and to articulate a clear vision for the direction in which he wishes the DA to progress is now costing him dearly — and resulting in a dearth of senior DA members willing to put their necks on the line for him.

“Nobody wants to back a horse which is indecisive,” the source said.

No clear candidate has thus far emerged as a favourite to replace Maimane in the event that attempts to force him from his position succeed. One obvious front-runner is current DA chief whip John Steenhuisen, who is understood to be holding his cards tightly to his chest at this stage. Another is Western Cape Premier Alan Winde.

The optics of replacing the DA’s first black leader with a white male are, however, unlikely to play well with the majority of the South African electorate. Barbed jokes about Maimane being packed off to Harvard — a reference to the manner in which former DA parliamentary leader Lindiwe Mazibuko left her position following a conflict with erstwhile party leader Helen Zille — are already circulating.

The perception among Maimane’s party supporters is that the possible reputational hit the DA could suffer as a result of his ousting is of smaller concern to his opponents than their desire to protect their party positions and uphold the ideology of a classic liberal opposition party — even if this move constrains them to an opposition role in perpetuity.

Maimane has thus far taken the high road in response to the allegations against him, tweeting:

“The smear campaign continues. These are gutless individuals who will not be named and instead spread lies about me and my family. I have always sought to build a South Africa for All. I remain committed to that vision, regardless of how uncomfortable it may make others feel.”

This effectively passive response is also causing some frustration among Maimane’s supporters, who fear it may be evidence that a man sometimes viewed as temperamentally unsuited to the cutthroat world of politics may be losing appetite for the fight required. If Maimane’s heart is still in the DA leadership position, he will need to take his gloves off. DM