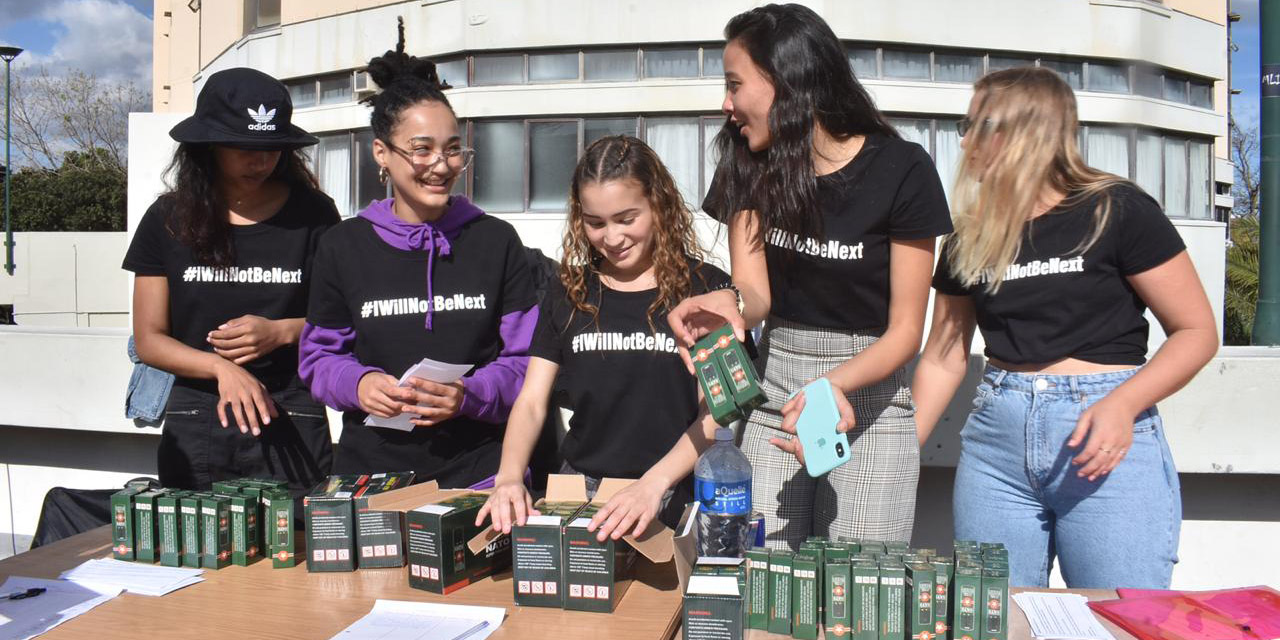 While protests against gender-based violence seem to have abated, women’s lives are still in danger. Activists have asked government to implement laws to make women safer. A group of young women have started handing out pepper spray to other women.

Days after it was revealed that missing 19-year-old UCT student Uyinene Mrwetyana had been raped and murdered at a post office, there was a palpable sense of anxiety among women about their safety. Marches to Parliament and to the Johannesburg Stock Exchange (JSE) highlighting the crisis of gender-based violence happened against the backdrop of more women and girls going missing and subsequently being found dead.

The reports on the murders of women highlight the high levels of violence against women in South Africa. The 2018/2019 crime statistics reveal that 2,271 women were killed — an average of seven women every day.

A group of 13 “femme students came together with the aim of raising money in order to distribute pepper spray to women, gender non-conforming and femme students”, said Nomazwi Nkoane, a third-year BA UCT student, the spokesperson of the #Iwillnotbenext campaign.

The pepper spray cans are for “women, femme and gender non-conforming people who need it, but can’t afford it. We’re giving them out because we all need it”, said Nkoane.

#Iwillnotbenext came as a response to women’s fear of being the next victim of gender-based violence which sparked the #AmINext hashtag.

“It has been clearly illustrated that there simply is no safe place for the women of this country. In light of this, a collective of femmes in the Cape Town area aims to provide a means for women to defend themselves in these troubling times,” reads the campaign’s Backabuddy page.

The #Iwillnotbenext campaign consists of UCT students, started shortly after the death of Uyinene Mrwetyana.

The group of young women felt that they had to do something.

“Uyinene’s death was devastating and hit close to home because she was also at UCT,” said Nkoane.

“We wanted to take a stand and say I will not be next and take back our power,” Nkoane told Daily Maverick.

The campaign has raised R115,679 since it began two weeks ago. It has distributed 142 pepper spray cans at Roscommon House, where Mrwetyana stayed and 598 cans were distributed outside UCT residence Tugwell Hall.

“We hope that this will help (women, gender non-conforming and femme people) feel safer. It’s what we can do on our part by giving people a means of protection”, Nkoane told Daily Maverick.

There have been only two rounds of pepper spray distribution, but the campaign is hoping to do more, dependant on how much money they can raise.

“We want to reach as many people as possible as far as we can possibly can,” said Nkoane. Presently, there are plans to distribute pepper spray cans in Wynberg, Observatory and Mowbray.

In terms of going to places that aren’t in the Southern Suburbs, Nkoane says that “it would require more organisation, but we do want to branch out to other areas as we’ve only done places we’re familiar with, but it would also depend on the funds (available)”.

Nkoane describes the campaign as providing a “temporary solution that’s dealing with the symptoms and not the cause (of gender-based violence)”.

In light of the protests and conversations about gender-based violence, UCT has put in place measures to make it easier to report incidents, one being an online reporting tool which will help track cases and identify perpetrators.

For Nkoane, this campaign is about “taking our agency back since men and the government won’t (keep us safe)”.

“We want the conversation on gender-based violence to continue. More awareness means we’re more likely to tackle the issue. Last year there was some hype (around gender-based violence) and then it died down. We need to keep putting pressure on the government,” said Nkoane.

President Cyril Ramaphosa has called for a meeting on Wednesday, 18 September 2019, to discuss how to tackle gender-based violence.

Nkoane hopes the structural change will come from that meeting.

“We need it to be easier to report gender-based violence. We need to start teaching children about toxic masculinity.” DM

For updates on pepper spray can distributions, follow their Instagram page @iwillnotbenext_campaign or email them at [email protected]. To donate go to their Backabuddy page.