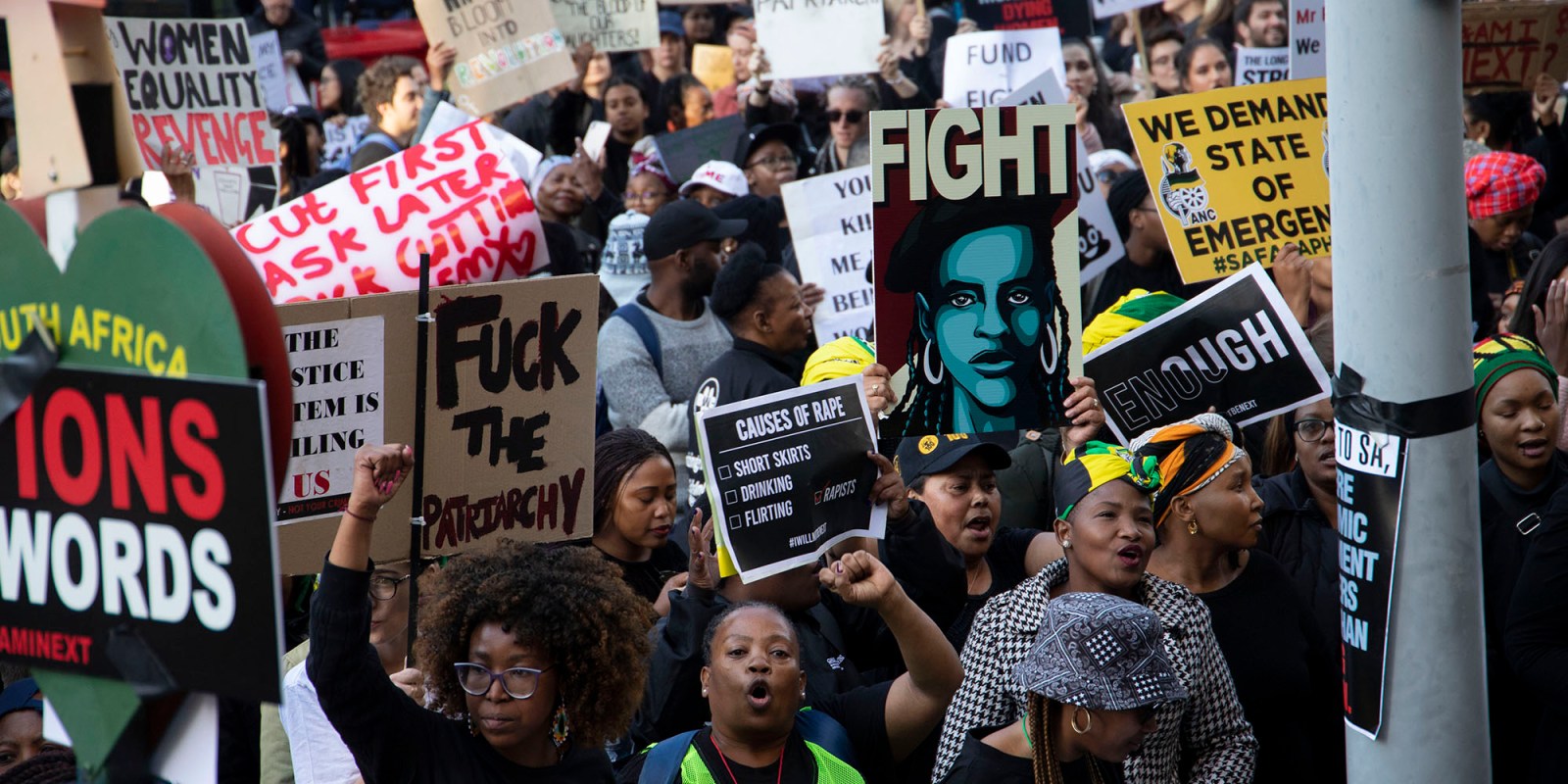 A mass action against gender-based violence and femicide was organised by 71 civil society organisations outside the Johannesburg Stock Exchange on 13 September 2019. Photo: Aisha Abdool Karim

The murder and rape of Uyinene Mrwetyana sparked mass actions and protests across South Africa. The latest of these was a call to action by civil society organisations to shut down the streets and businesses of Sandton on the ‘Real Black Friday’.

At noon on Friday, 13 September, about 200 women, dressed entirely in black, were gathered at an intersection on Maude Street and Rivonia Road in Sandton. They sat in a circle on the tar road while men formed a human chain around them. Police had blocked off the road and only one or two cars made it up to the intersection before turning around.

The group was sombre as they were led in a prayer for victims of gender-based violence. As the prayer progressed, it became more emotional with the voice coming through the megaphone cracking. Several of the women were unable to hold back their tears as they listened to the words echoing across the street.

This was the start of the second half of the Sandton Shutdown in Johannesburg. What began as a sit-in co-ordinated by 71 civil society organisations eventually splintered into two separate events. One cohort, including the Black Women Caucus and the ANC Women’s League, remained at the Johannesburg Stock Exchange (JSE) while members of the public and activists left to march through the streets of Sandton.

The women followed a designated route, for which they had received a permit from the police. After the prayer ended, the women got up and continued walking down Rivonia Road until they reached the Grayston Drive intersection. Small groups sat at the zebra crossings at each traffic light and the majority gathered at the centre of the intersection. All cars attempting to drive through the intersection were directed to turn around by the police.

One driver who continued trying to go through the intersection was surrounded by demonstrators, who covered the windows and windscreen of his car with their posters. The final poster placed on the passenger-side window read: “We should not have to shout over dead bodies.”

The group dispersed from the centre of the intersection after about 10 minutes and formed a human chain circling the perimeter. Once the demonstrators had interlinked their hands, the atmosphere changed. As they formed this physical barrier around the space and drew from each other’s strength, it was also a reminder of the reason for this protest.

“I am here as a sexual assault survivor. I was raped when I was six years old by my cousin,” said one activist as she stood at the centre of the intersection surrounded by the wall of women. Other women in the group recounted similar experiences involving family members.

The march continued along Grayston Drive, stopping at the Investec and Benmore Centre intersections, before turning on to West Street and looping back to the starting point at the Johannesburg Stock Exchange.

As the group brought traffic to a standstill, many cars along the route began hooting in support. Women gathered outside businesses and hotels to watch the procession, with some raising their fists in solidarity. While many began the march with tears in their eyes, as they made their vulnerabilities public, they ended the route with cheers and singing.

The “Real Black Friday” event was scheduled to start at 3am, with about 100 protesters gathering at the Johannesburg Stock Exchange in Sandton. Buses and taxis were meant to pick people up at 1.30am, with the organisers and police expecting thousands to arrive. Pick-up points for transportation were arranged for Alexandra, Carltonville, Midrand, Pretoria, Soweto, Tembisa, Vaal, and Wits University.

However, it seemed that some buses did not arrive at the pick-up points in time, with groups of people joining the mass action at sporadic intervals from 4.30am onwards. By 10am the crowd had grown to its biggest size, roughly 800 people.

At this point, activists and gender-based violence survivors took to the podium during the sit-in to share their stories and to urge the business sector to take a stance in the fight against femicide.

“Gender-based violence affects us all in our spheres of life. There is no one immune to the violence”.

One of the speakers was Gugu Ncube, whose story became known after she took to the Union Buildings to demonstrate in a nude protest. Ncube said she was sexually abused by a professor from the University of South Africa.

Over her clothes, Ncube wore underwear with testicles dangling over it.

Civil societies that took part in the shutdown handed over a memorandum to the JSE’s CEO, Nicky Newton-King. In the memorandum, the marchers asked that corporate work environments characterised by sexual harassment be eradicated. They also demanded private corporations listed on the JSE be charged a 2% levy on profits to help fund the fight against gender-based violence.

“I salute you all for coming to Sandton and bringing to the heart of business the focus on gender-based violence. Your voice is loud and I hope it echoes through our very special land,” Newton-King said.

The crowd became displeased when the CEO could not commit to the memorandum, with many saying the matter required immediate attention.

“We are tired of singing!” shouted one protester. “We want the 2% now, we cannot wait for seven days while children and women are being killed and raped.”

Many of the women who attended the march said they were tired of the broken promises made by state leaders and government concerning gender-based violence.

“We need to have a strategic plan to fund the fight against gender-based violence. It’s not only government that should be held accountable; big business should also be accountable. And they are part of the problem, they make women start work early in the morning, without even providing transport sometimes.”

Another woman said even though she had never been abused, she stood in solidarity with all the women who have been abused.

“It doesn’t have to be my personal experience. It’s experiences of every woman in this country and it’s a matter of when is it going to be my turn,” Tshidi Motsoeneng said.

“I am here because I am a woman, I am here to represent women with disabilities, to make their voices heard,” Nomasomi Limako told Daily Maverick.

Limako, who has been with the One in Nine Campaign for six years, arrived at the JSE at 3.30 on Friday morning, using transport provided from Duduza on the East Rand.

“These f*ckers who think they can do things and get away with it,” Bridget Khomo told Daily Maverick, when asked what brought her to the protest.

“It’s a crisis, this has to stop. They must just keep their f*cking d**ks to themselves,” Khomo continued. She arrived at the JSE at 4am, travelling from Soweto.

“My mom was raped and murdered in a domestic abuse situation. I was raped. It’s important for me, as a mom, to make sure there isn’t a third generation,” Lulu King told Daily Maverick.

King runs the Hellen King Foundation, named after her late mother, which helps survivors of gender-based violence and domestic abuse with their cases along with other support.

King’s sign at the protest read: “Dear Mr President, My mom was raped. I was raped. I will die fighting before they touch my kids. Your move.” DM