Gender-based violence: The ball’s in your court, Mr President 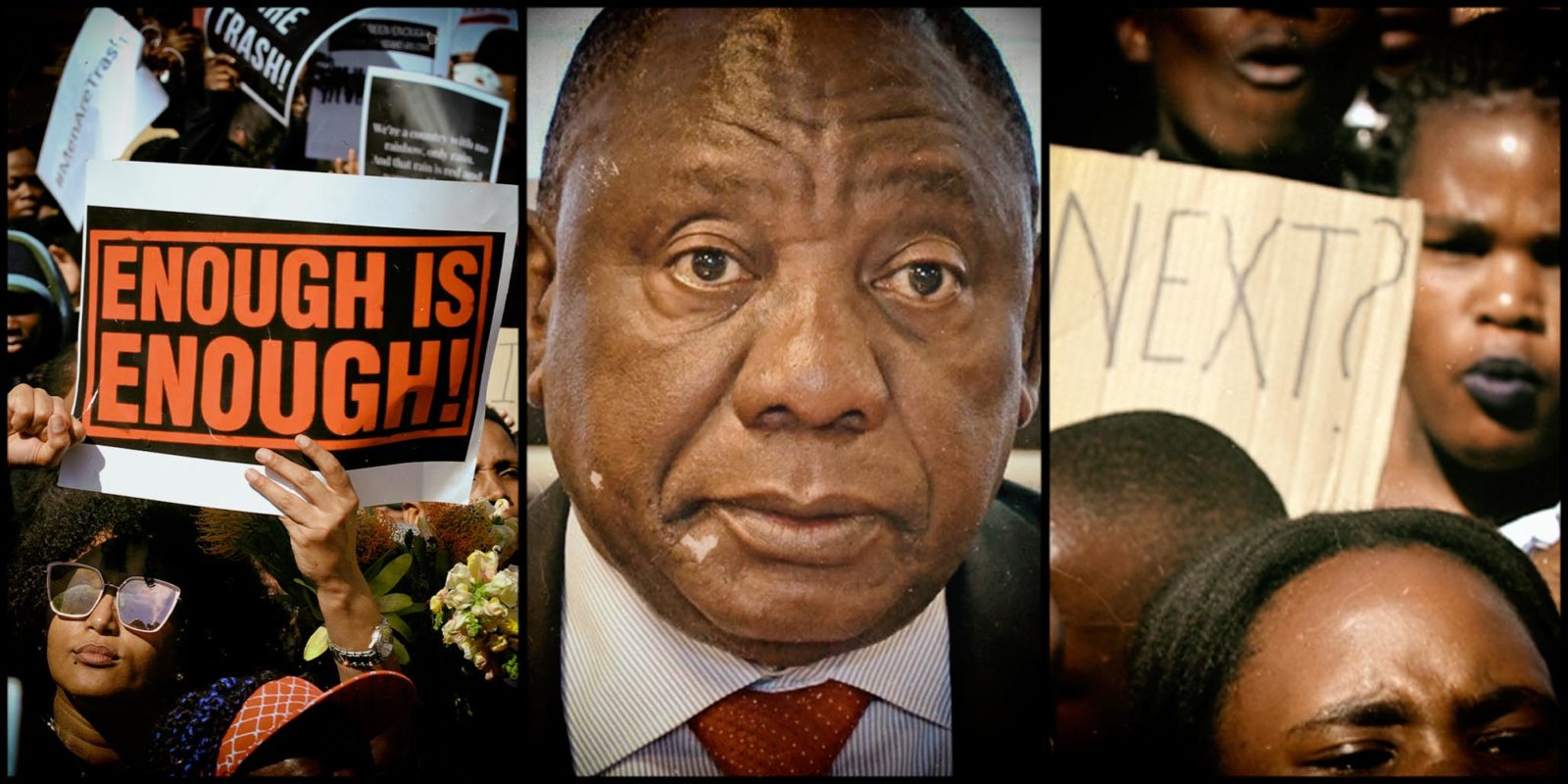 President Cyril Ramaphosa is yet to introduce the policies or allocate the budget to match his empathy with victims of gender-based violence. (Photos: Gallo Images / Ziyaad Douglas) | GCIS)

Cyril Ramaphosa’s response to gender-based violence could be one of the defining issues of his presidency. He’s talked the talk, now he must act. On Wednesday in Parliament, he has that opportunity.

Addressing the media in Parliament on Tuesday 17 September, DA chief whip John Steenhuisen outlined nine proposals the opposition would implement to reduce gender-based violence (GBV) and femicide, which has been raging for years and has recently led to unprecedented outrage and protests under the banners of #TotalShutdown and #AmINext.

DA MP Nazley Sharif, who has been outspoken on the need for drastic action, said her party’s proposals were “a very good start” but could continue to improve. She was adamant, however, they would be more effective than President Cyril Ramaphosa’s plans.

Ramaphosa has already taken violence against women far more seriously than his predecessor Jacob Zuma, in speech at least. He listened to survivors at the National Summit against Gender-Based Violence and Femicide and committed to taking action during his February State of the Nation Address (Sona). He signed a declaration against GBV and recently addressed the nation on the issue.

But Ramaphosa has been reactive rather than proactive and is yet to introduce the policies or allocate the budget to match his empathy. He could have that opportunity at a joint sitting of the National Assembly and National Council of Provinces on Wednesday 17 September, which the president called to discuss GBV and femicide.

“This is a national crisis,” said Ramaphosa at a dialogue with women in Lusikisiki, Eastern Cape, on Monday.

“In the end, violence against women is not and is never the fault of women. It is the men who rape. It is the men who kill women and there is therefore an obligation for the men of this country to speak out against violence, against harassment and against abuse,” he continued.

The president continued to emphasise his recent proposals. He has said Parliament will review domestic violence and sexual offences laws to prioritise victims and survivors and review the minimum sentences for such offences.

Ramaphosa has also called for the state to oppose bail in all sexual offences cases and for the national register of GBV offenders to be reformed and possibly made public. He has said the state will review closed cases, strengthen emergency response teams, ensure DNA testing and rape kits are available, and find additional funding to support the anti-GBV fight.

He has called for proper training and equipment for the police and said society must confront any of its values that uphold patriarchy and prevent gender equality.

The president told his Lusikisiki audience that more initiatives would be announced during the parliamentary discussion, in addition to those he mentioned during his national address almost two weeks ago.

The president has made GBV a priority and cancelled his visit to the upcoming United Nations General Assembly meeting in New York to focus on addressing the onslaught against women and public violence. But it will take more than broad commitments to convince a traumatised public that anything will change.

During his February Sona address, Ramaphosa committed to funding the fight against GBV, but activists saw no change when the national Budget was released. Government has drafted a national plan on combating GBV and public comments close today, but the president has almost reached his deadline to appoint a national GBV council in six months after he signed the declaration at the national summit in March.

“Anybody who rapes a woman basically destroys her life,” he said on Monday.

“In my view and in my book if you have raped and if you have killed a woman you should be put away for life and life must mean life.”

Ramaphosa, however, has only spoken of criminal justice reforms in broad strokes. His ANC deputy secretary-general, Jessie Duarte, didn’t add any more specifics this week when she told SABC there needs to be a “harsher perspective” on fighting patriarchy in South Africa and admitted police aren’t properly trained to handle rape cases.

When Duarte was asked about the ANC’s failure to improve the situation while in government, she fell back on the principle of the separation of party and state.

The DA’s Steenhuisen on Tuesday said:

“The tragic reality is that unless swift and decisive action is taken, history will keep on repeating itself, leaving many more women to join the list.

“The country needs urgent, clear and decisive action that goes further than jailing perpetrators and that addresses the root causes of the social and moral collapse.”

The DA proposed changing terms in legislation from “domestic violence” to “domestic abuse” to incorporate crimes that don’t involve physical violence, drafting a defined process for court interdicts against abuse, ensuring protection orders are enforced and followed up by searches for weapons, and creating specific offences for authorities who fail to assist victims of domestic abuse.

Writing to Parliament on 12 September, Ramaphosa said, “In the last two weeks South Africa’s approach to violence perpetrated against women has changed fundamentally.”

Little, however, is yet to change, but Ramaphosa has the chance to start trying to turn the tide against what is a brutally complex South African problem. DM