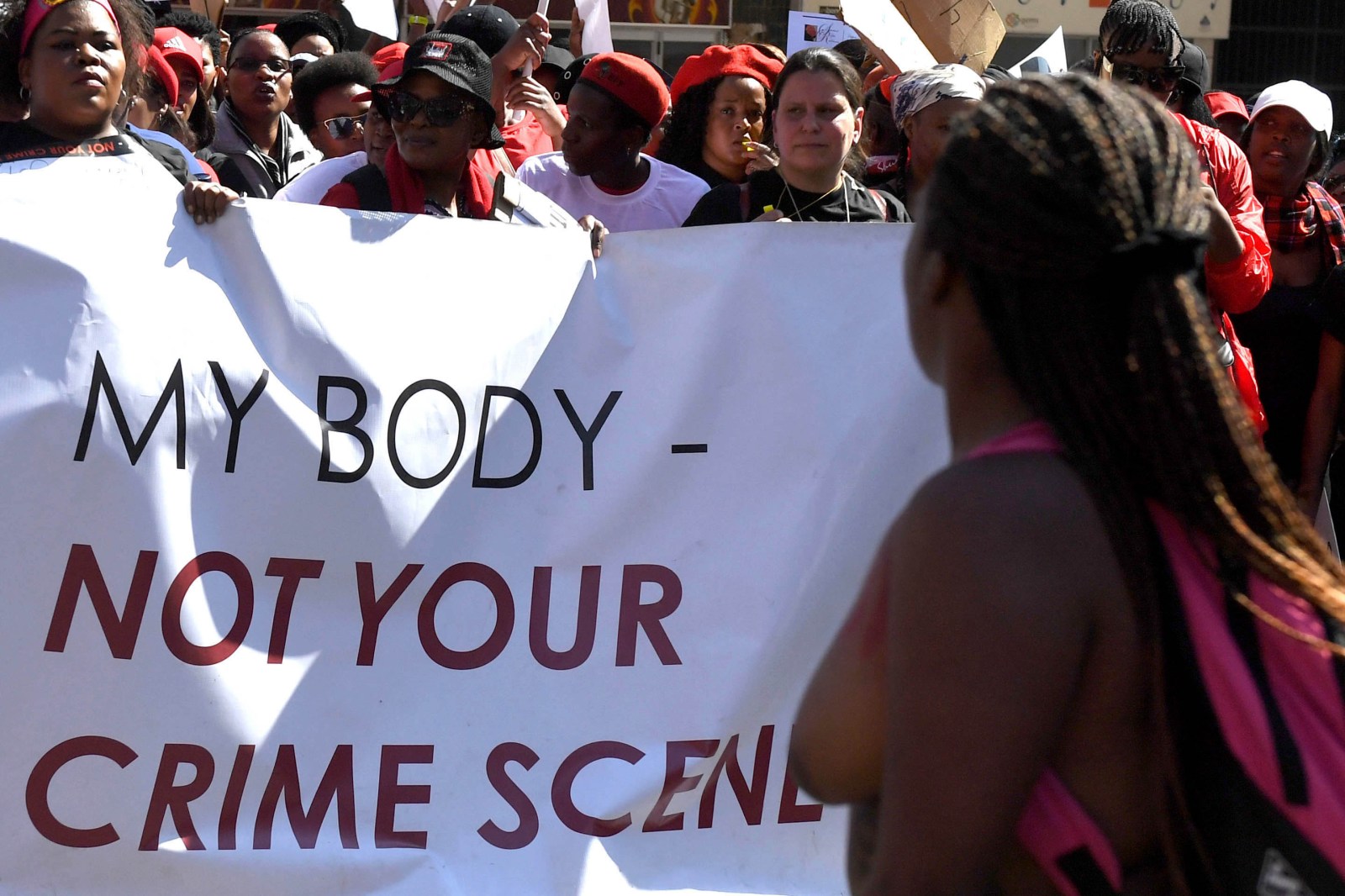 Women march to the Union Buildings during the #TotalShutDown demonstration against gender-based violence on August 01, 2018 in Pretoria, South Africa. Thousands of women across the country embarked on the #TotalShutDown marches to highlight the plight of women and children abuse on August 01, marking the start of Women’s month in South Africa. (Photo by Gallo Images / Netwerk24 / Deaan Vivier)

President Cyril Ramaphosa said he would act on gender-based violence. His government has failed, say civil society groups, when it was time to cough up the money.

When President Cyril Ramaphosa addressed #TotalShutdown protesters in August and heard from women who had survived abuse, he said he was ashamed at how men act, denying women their constitutional rights as they are “violated, abused, assaulted and a number are also killed”.

At the National Summit Against Gender-Based Violence and Femicide in November 2018, he railed against the social, economic and political effects of patriarchy and committed to fighting femicide.

“We cannot, should not, and will not stop until we put an end to this scourge,” he said to applause.

In the State of the Nation Address (SONA) in February 2019, he spoke of action.

“We have listened to the call to make funds available to combat gender-based violence, and have allocated funding in the current Budget to support the decisions taken at the summit.”

“It appears that President Ramaphosa was merely paying lip service to the eradication of gender-based violence and femicide with no political will to follow through,” said a coalition of 20 civil society organisations in a statement on Thursday.

In his SONA, Ramaphosa committed to increasing funding for Thuthuzela Care Centres, which provide a range of services to survivors of sexual violence, and Khuseleka Care Centres, which support women and children who have survived crimes such as domestic violence, rape, human trafficking and sexual harassment.

Letlhogonolo Mokgoroane from Sonke Gender Justice was among several to express disappointment.

Minister of Women Bathabile Dlamini’s spokesperson Shalen Gajadhar said the department was surprised “and, quite frankly, disappointed” that Mboweni’s speech did not include any issues on tackling GBV or gender-focused budgeting.

Gajadhar said the department was still working through the details of the Budget, but it was “surprising” Mboweni did not mention any of Ramaphosa’s commitments to tackle gender issues or policy commitments such as the millions allocated to sanitary dignity for young women.

“We don’t want to believe that no money has been allocated,” said Gajadhar on the Budget’s lack of focus on GBV issues.

“We remind the government that the realisation of substantive equality is not an option but a duty placed upon the state by our Constitution, and do not take this step back lightly,” the coalition said in a statement.

Vuyokazi Futshane from Oxfam SA, part of the Budget Justice Coalition, said, “It doesn’t seem like any real commitment in terms of putting money where your mouth is.

“It’s disappointing to say the least because it doesn’t seem like a lot has gone into meeting the commitments of the summit and even the SONA,” she added.

“These services include post-rape and other related care, domestic violence shelter, child protection, residential facilities for older persons and people with disabilities, child and youth care centres, victim empowerment services, home-based care and substance abuse facilities, amongst others. They are services largely provided by women, to women,” read a Care Work Project statement.

The Budget’s detailed estimates of national expenditure do include some programmes related to GBV and gender equality initiatives.

The department of women received R20.8-million to conduct four national dialogues on combating GBV each year for the next three years.

The Budget allocates R49.1-million to the department to conduct outreach campaigns on gender equality, women’s rights and GBV and R13.1-million to a social transformation and economic empowerment programme.

DA shadow minister for women Denise Robinson said Ramaphosa sounded sincere at the summit and had urged him to act on his comments.

“I’m afraid unfortunately when you have cases like Eskom and other things that are financially dire women’s rights and the plight of women are of very little interest in the country,” said Robinson.

It’s unclear whether the police and justice departments, crucial to tackling GBV, will implement or allocate resources to any programmes to fulfil Ramaphosa’s commitments. Gender issues are not mentioned in the Budget’s expenditure analysis and outline of projects for either department.

The Presidency, Treasury and department of social development did not respond to requests for comment.

On 8 March, Ramaphosa is expected to sign the declaration of the Summit Against Gender-Based Violence and Femicide. Activists will be calling for resources, not words. DM