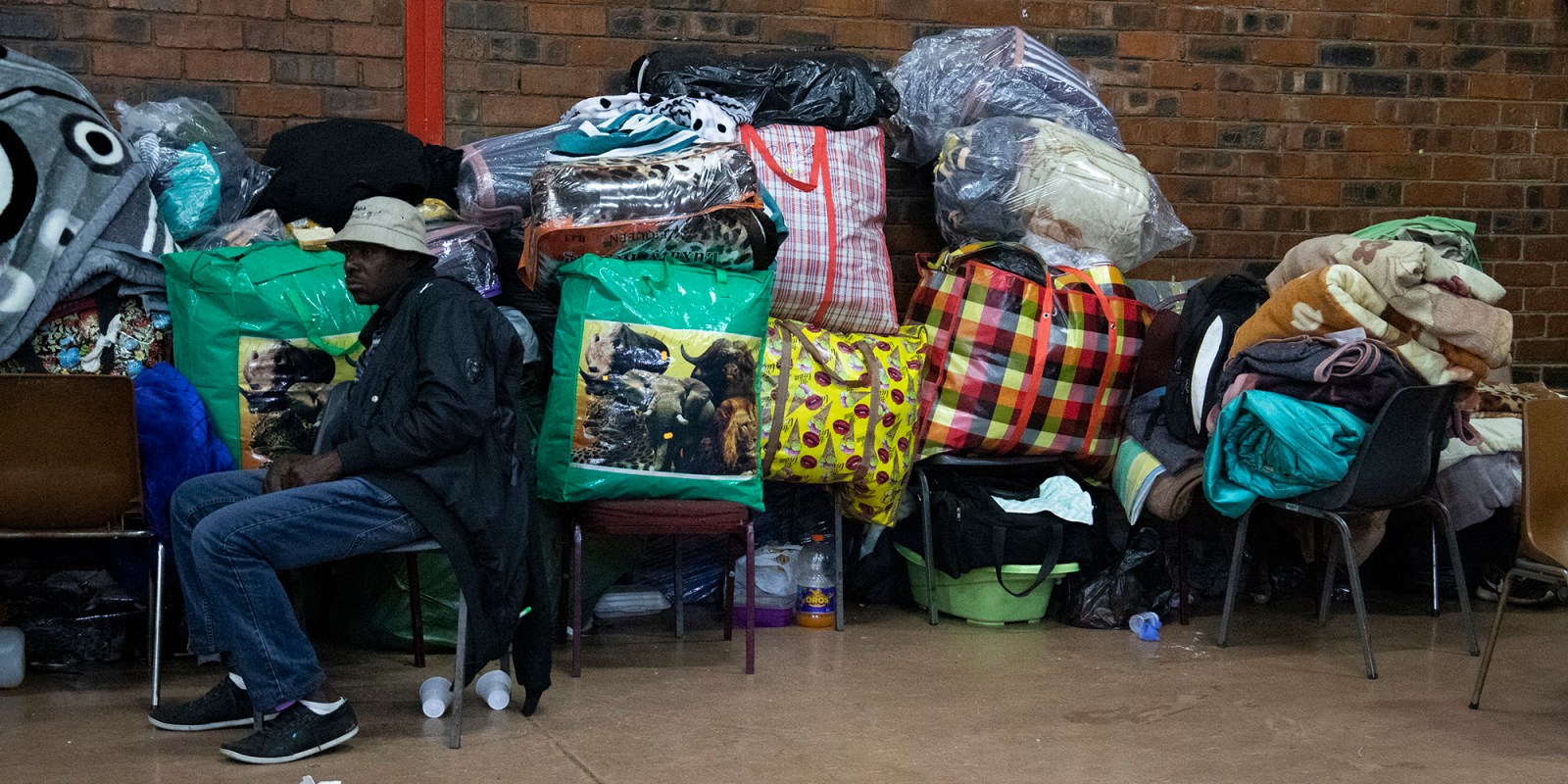 A foreign national who has been displaced sits at Tsolo hall after xenophobic violence brokeout in Katlehong on 06 September 2019, leaving 800 people without shelter. Photo: Ayanda Mthethwa

Scores of foreign nationals have been left homeless following an outbreak of xenophobic violence in Katlehong, Ekurhuleni on 6 September. Daily Maverick visited the two campsites in the township – Tsolo and DH Williams hall – where the foreigners are being housed temporarily.

“I got a frantic call from my landlord late in the afternoon; I still had two hours of work before I could knock off: ‘Lorraine!,’ shouted the landlord, ‘come get the kids, it’s bad and I don’t think it’s safe for any of you here any more. They are burning everything!’”

“For a few seconds, I think I couldn’t breathe because of shock and fear for my children. I remember mumbling something to my supervisor and I quickly rushed home.”

Lorraine Ndlovu, 33, is one of the 800 (588 adults and 227 children) foreign nationals that were displaced following an outburst of xenophobic violence in Katlehong a week ago. Their shacks were burnt down by an unknown mob that was dropped off in the settlement by minibus taxis.

“We hid in the backseat of my landlords’ car because they barricaded the roads, saying that no foreigners will be allowed out of the area. Thankfully my landlord said we are family and they let us out.”

Gauteng has seen a surge of the violence in the last two weeks, with homes and businesses belonging to foreign nationals looted, vandalised and burnt down – in extreme instances people were physically attacked and killed.

However, Ndlovu says the attacks were expected because, prior to that, there were messages circulating on WhatsApp detailing the horrific plans to “kill all foreigners”, but she ignored them, thinking they were a hoax. It was only after the violence erupted in Johannesburg that she became alarmed and, out of fear that it would spread to other parts of the province, started saving money to get her family out of South Africa.

“I saved R3,200, but it’s all gone. I was planning to get my children out of this country. I lost everything. When I came to this place, I only had R150 in my purse and the clothes I was wearing when I left for work,” a teary Ndlovu says.

“What breaks my heart the most is that my children don’t have their birth certificates any more, I don’t even have my passport. It’s all gone”.

Giggles and chatter permeate the room. Plastic bags, blankets, clothes and mattresses decorate the far-end sides of the hall – with chairs sparsely lined up at the centre. And as I pass a group of teenagers gathered around a table playing Checkers, one woman points to her child and says: “Look at my baby, he is so happy, and oblivious to what we’re going through. I wish I was him.”

Across the hall from where Daily Maverick was speaking to Ndlovu sits Panganai Nyambo, a 42-year-old father of seven who also lost all his belongings including his passport and Zimbabwean identity document when his shack was stripped down while he was asleep.

“The time was 02:30 when I heard a scratchy sound, but I thought maybe the rats are fiddling with my shack, like they always do.

“As I was about to turn on the light, my shack was uprooted… I quickly hid in a corner and kept quiet. They searched through my belongings, but they only found my stock. As soon as they left, I ran for my life and didn’t look back.”

Nyambo owned a small spaza shop and lost stock to the value of R20,000 when his shack was demolished.

“I don’t know how I am going to rebuild what I lost. My family is relying on me. I can’t go home, because all the money I had was left behind in my shack. It’s painful.”

Both Ndlovu and Nyambo believe the attacks were co-ordinated because of how the events unfolded.

“They are lying if they say we are stealing their jobs. Almost all foreign nationals that reside in Mandela informal settlement are self-employed. So which jobs are we stealing?” Ndlovu said.

The Ekurhuleni metropolitan has since been providing necessities such as electricity, blankets, medical services and ablutions, while various organisations such as Red Cross, Doctors Without Borders and community churches have donated food and clothing.

During Wednesday’s visit, country ambassadors were also present, offering support services for those who want to go back to their home countries. Many of the displaced foreign nationals were adamant that going back home is the most desirable option.

Elitah Jiwawa, 26, a mother of a 10-month-old baby, said: “I would rather go back home than to stay here and put my child’s life at danger. Even though going back home means hunger, at least we will be alive.”

“This environment is not good to raise children in. They ask questions: ‘Mama why was our shack burned down, when are we going home?’ That traumatised them,” Ndlovu said. DM